We’ve all heard the phrase ‘catches win matches’. Well, where better to prove the old maxim than on one-day cricket’s biggest international stage?

From the moment Ben Stokes set the tone in the 2019 World Cup’s curtain-raiser, the standard of catching has been nothing short of startling. In an era when players are as fit, agile and athletic as they ever have been, they routinely perform breathtaking stunts to pull off the most ridiculous and acrobatic catches.

The World Cup had no shortage of those moments where you rub your eyes and go, ‘did that just happen?’ Below is our pick of the most memorable efforts. 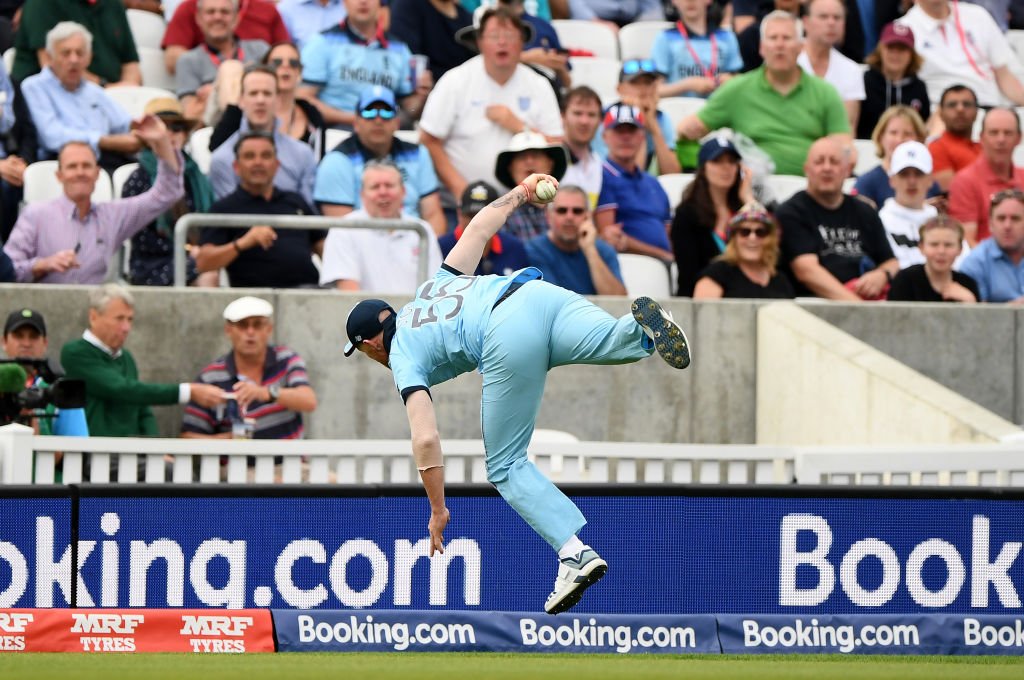 We already knew what Ben Stokes can do on the field – remember Trent Bridge in 2015? But in the World Cup opener, he took things to the next level, producing a superhuman effort to catch Andile Phelukwayo at the deep mid-wicket boundary. After the batsman swept Adil Rashid, Stokes moved a few paces back, leapt in the air to align himself almost horizontally and caught the ball with his right hand arched over and forming a reverse cup. Simply breath-taking, and a moment in the World Cup that will be remembered for many years to come. 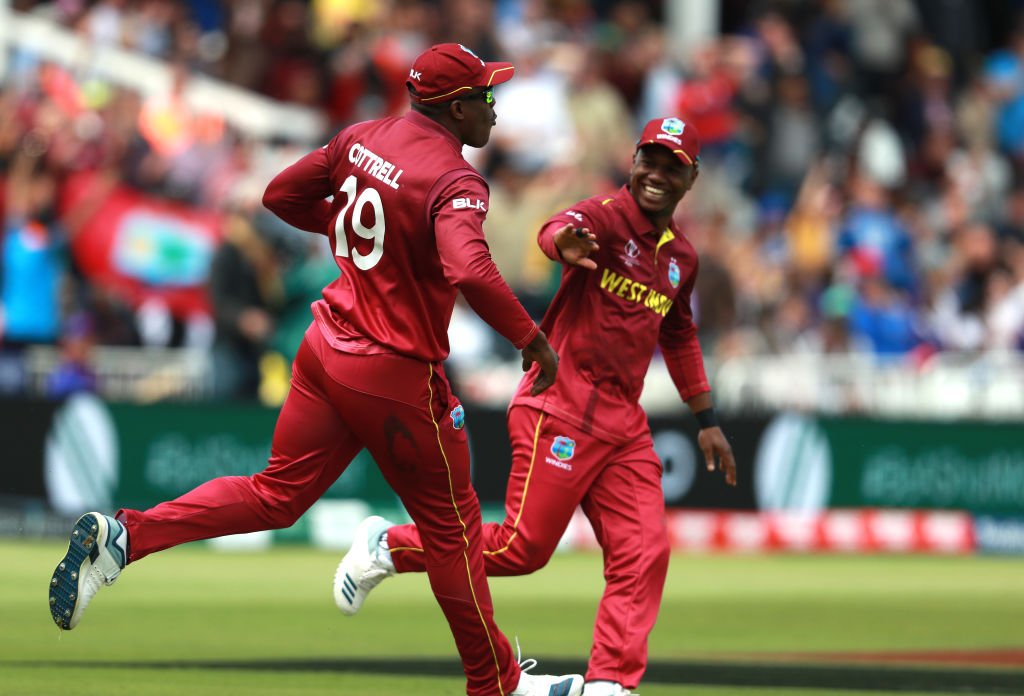 Though the bar had been set high by Stokes at the Oval, Sheldon Cottrell absolutely matched it, as Trent Bridge was treated to a stunner. After Steve Smith launched Oshane Thomas over backward square leg, Cottrell sprinted a long way to his left and stuck out his left hand to grab it in front of the boundary. Then, as his momentum carried him over the rope, he threw the ball in the air, stepped over the boundary and stepped back in to complete a mind-blowing effort. 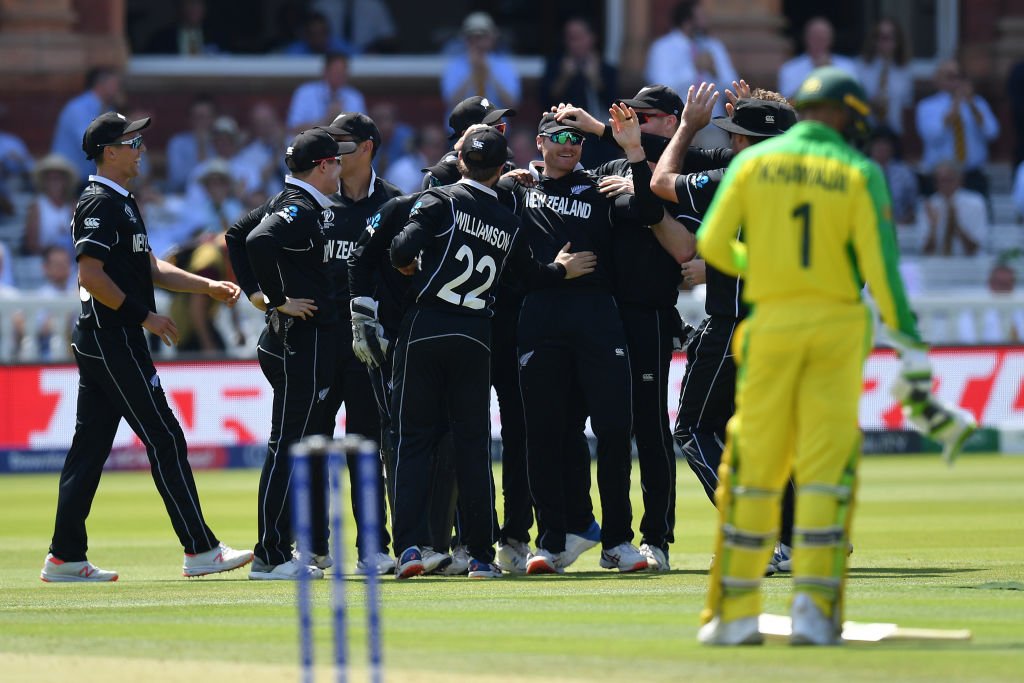 Smith was once again in for a shock when Australia met trans-Tasman rivals New Zealand at Lord’s. Days after his excellent catch to dismiss Imam-ul-Haq in a defeat at Edgbaston, Martin Guptill repeated his heroics to pull off a blinder at leg gully, after having dropped two chances. After Smith laid into a pull, the ball was travelling at breathtaking speed, but apparently not quickly enough to stop Guptill from diving to his left and sticking one hand out to stop it dead in its tracks. 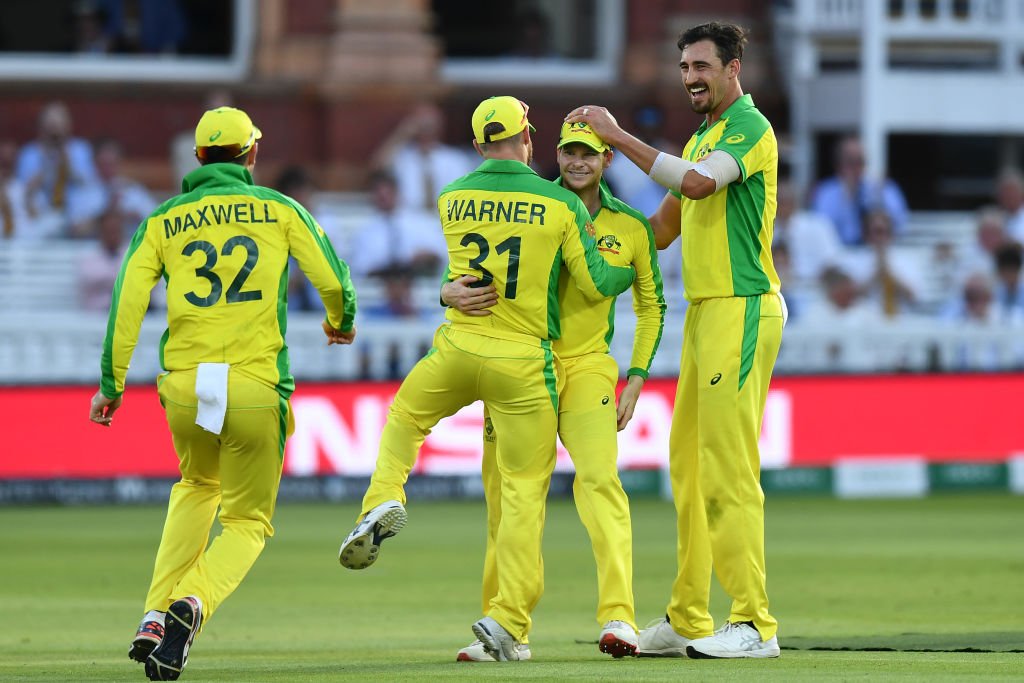 Steve Smith fell to, and was responsible for, a superb catch

Having fallen victim to a screamer himself, Smith returned the favour when New Zealand came out to bat. After Tom Latham went leg-side to a fuller ball from Mitchell Starc, Smith leapt to his right at short midwicket and snaffled it with his right hand. It gave Starc the second of five wickets as Australia demolished New Zealand by 86 runs in a defence of 243. 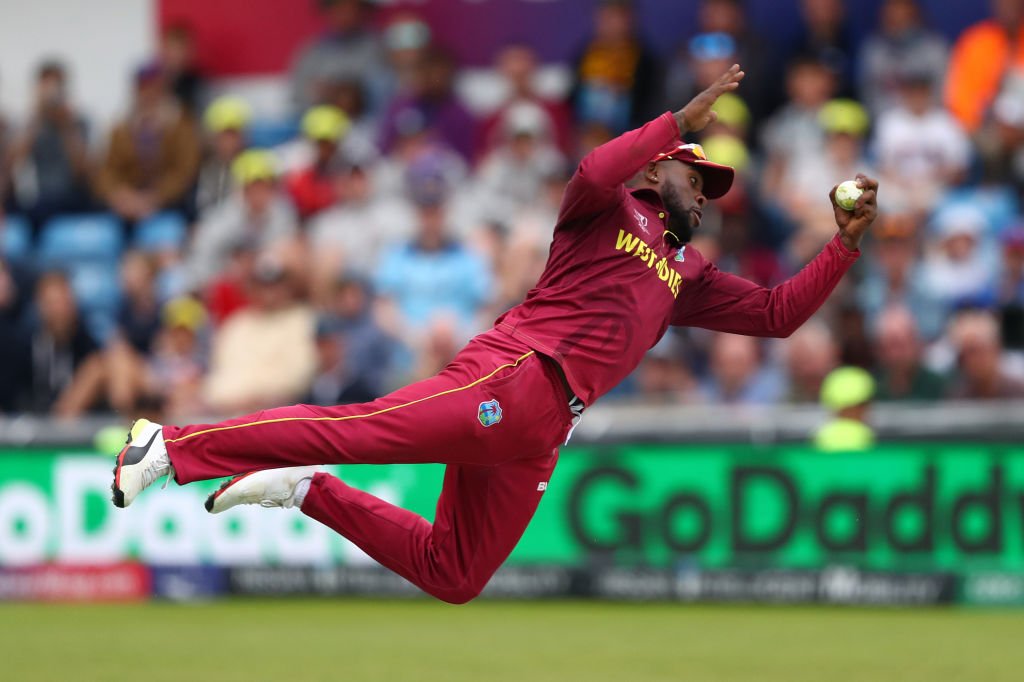 Fabian Allen did a Ben Stokes – kind of

West Indies ended their 2019 World Cup campaign in style as Fabian Allen, who has taken some amazing catches in recent times, showed great athleticism to undo Sayed Shirzad off the bowling of Oshane Thomas and wrap up a 23-run victory. The effort wasn’t too dissimilar to that of Stokes earlier in the tournament – the only difference being that Allen was inside the circle. It was another piece of evidence of the young man’s unmissable potential. 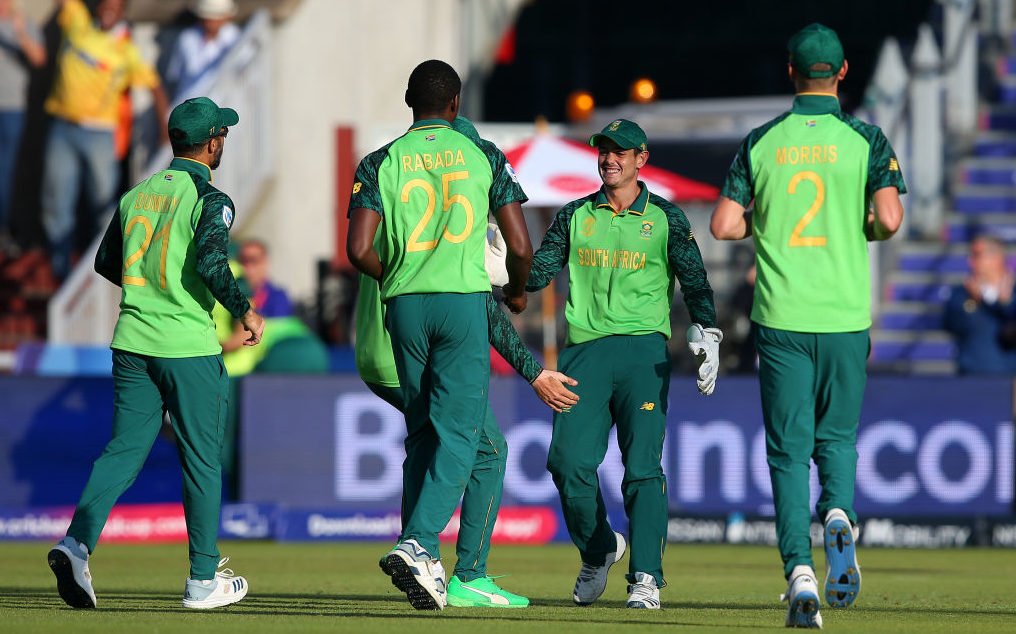 Defending a below par 227-9, South Africa needed some magic to give themselves a chance of beating India. Wicket-keeper de Kock provided it with a flying catch to his right to dismiss the dangerous Virat Kohli for just 18. After a characteristic swing well away from the body by Kohli produced a thick outside edge, de Kock flung himself to his right to grab it with his right glove, even as the ball continued to curve away from him. However, though it reduced India to 54-2, the effort wasn’t enough to drive the Proteas to victory. 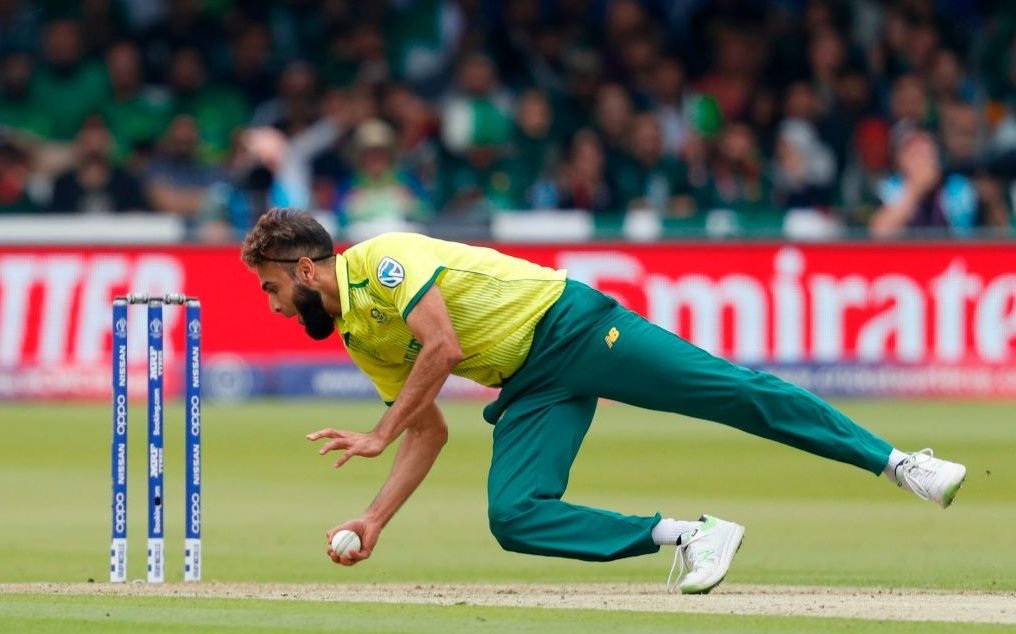 Age was no bar for Imran Tahir, who grabbed a stunning return catch to dismiss Imam-ul-Haq

In Lord’s tournament debut, Tahir produced a rare moment to savour for South Africa. Pakistan openers Imam-ul-Haq and Fakhar Zaman had started well, but after dismissing the latter, Tahir struck again. Tossing one up to Imam, who charged down the ground before firmly driving it back at the bowler, Tahir got down low to his right in a flash, before taking off on another famous celebration. 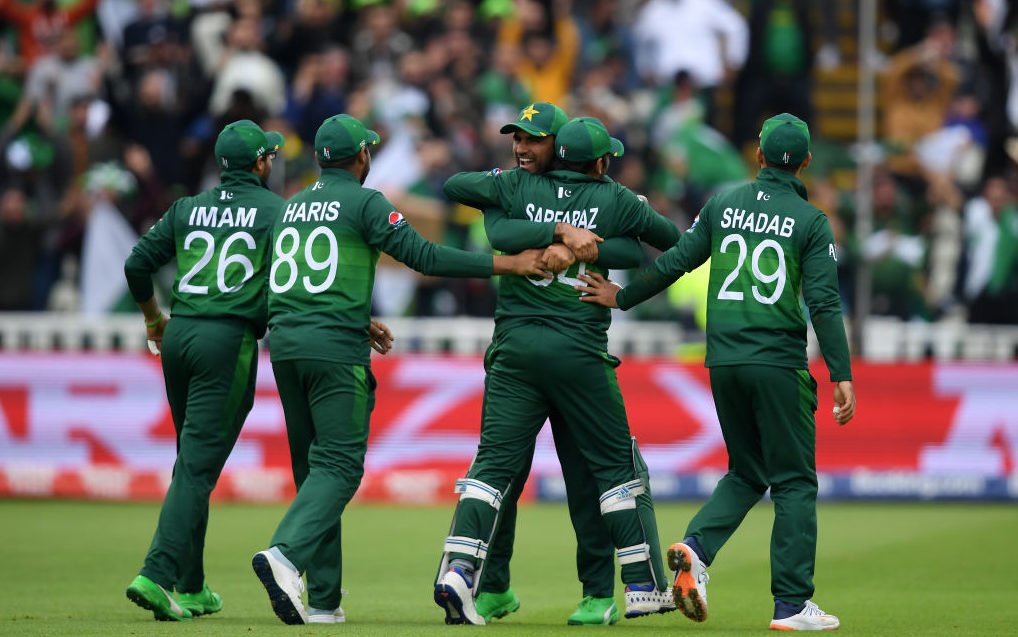 After New Zealand had lost both their openers cheaply, Sarfaraz put them in even more strife with a brilliant catch to dismiss Ross Taylor. Shaheen Afridi slanted one across to the New Zealand batsman, who pushed forward nervously and sent a thick edge flying to the right of Sarfaraz. The Pakistan captain responded by diving full-length to grab a screamer in an entertaining contest at Edgbaston. 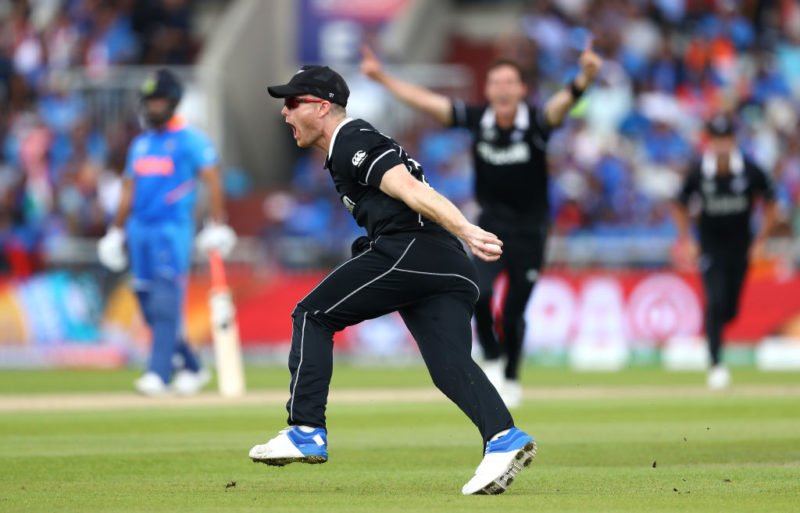 “The catch of the tournament”, according to Michael Atherton. This was one for the ages. With his wrong hand, no less. It was down as much to anticipation and balance as it was to cat-like reactions. The timing was perfect, in more ways than one: a left-handed grab at gully, with the ball millimetres form the turf, after being driven by Dinesh Karthik, well to the left of the fielder. It snuffed out a dour innings from Karthik and brought India’s powerhouse batting line-up down to 24-4, from the depths of which they never recovered, as New Zealand booked a final date for the second successive tournament.