Angelo Matthews has revealed he had not bowled a single delivery in 2019, whether competitively or in the nets, prior to dismissing Nicholas Pooran in the 47th over with his very first delivery when West Indies faced Sri Lanka on Monday.

With Isuru Udana having already bowled ten overs and Sri Lanka’s death-bowling kingpin Lasith Malinga left with only one over remaining, it appeared that captain Dimuth Karunaratne may have to turn to his leg-spinner Jeffrey Vandersay, on World Cup debut, with 1-50 from seven overs, to stifle the free-flowing Nicholas Pooran.

After the West Indian brought up his century after the calamitous run-out of the enterprising Fabian Allen (51), Pooran began to free his arms as the last remaining recognised batsman. A refused single from the final delivery of Udana’s over left the destructive left-handed stroke-maker on strike to face the 48th, with 31 runs required from the three overs.

In lieu of turning to the leg-spin option, or indeed another over of his own bowling, Karunaratne instead deployed his trump card – the medium pace of Angelo Matthews last seen in an ODI in December 2017 in Visakhapatnam.

Matthews floated down a wide length ball and with the faintest hint of willow from the fast hands of Pooran, the 32-year-old had turned the game on its head with his 115th, and perhaps most memorable, ODI wicket. 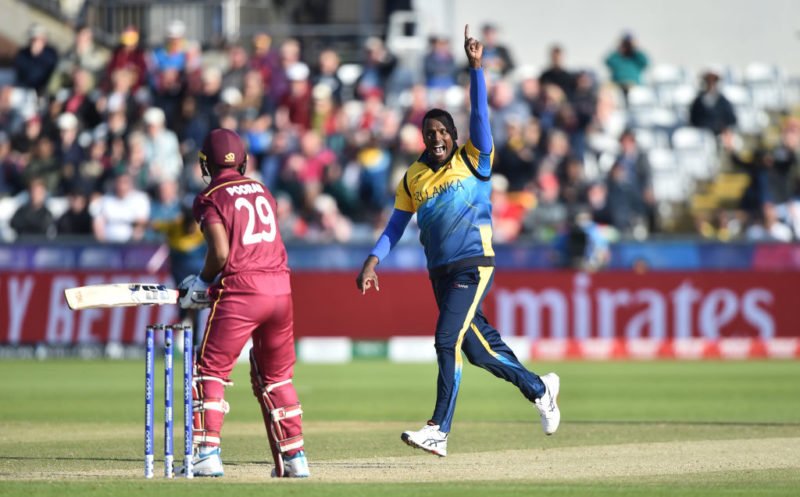 Angelo Mathews celebrates as he gets Nicholas Pooran edged behind

When asked if the decision from Karunaratne had surprised him, Matthews confirmed the suspicion he had not even bowled in the nets: “I haven’t held a ball in eight months. That was the first ball.”

“But we knew we needed to make up two overs, we couldn’t bowl the spinner when Pooran was batting beautifully. I said to the captain I had a bit of experience so I’ll try bowling the two overs.”

“Pooran was the man we needed to get. I was quite fortunate to get him in the first ball before he clubbed me for a few sixes, but it was a fantastic effort by him. He batted all the way through and nearly got them through. It was fortunate for us to get him at the right time. Our fielding was not up to the mark but we fought through all the way.”

Related Story: Watch: Nicholas Pooran takes his first international wicket on the way to a four-for against Pakistan

The right-armer, who had earlier made 26 with the bat, then went on to affirm his desire to bowl again in the future.