A group of fans were evicted from their seats at the SCG following a lengthy delay in play, with Mohammed Siraj and Ajinkya Rahane engaged in discussions with the umpires in the lead-up.

The incident follows a complaint alleging racial abuse from the SCG crowd made by India on Saturday.

The incident happened at the end of Siraj’s over, the 86th in Australia’s innings, as he walked to the boundary ropes to take his position in the deep before the next over.

Hope it’s not crowd trouble again. Siraj again has walked down and complained to the umpires about something that has happened in the same area behind him as yesterday #AUSvIND pic.twitter.com/MbC8Im85Fe

Tim Paine was seen enquiring about the details with the Indian players as they crowded in around umpire Paul Reiffel. Rahane had an arm around Siraj’s shoulders as the conversation unfolded.

Soon after, the police were seen checking with the fans in the stands behind where Siraj had been stationed in an attempt to identify those responsible. Soon after, six men, decked in masks, sombreros, and colourful shirts, were escorted out of the ground.

There’s seriously no place for this rubbish. Never understand the need to yell abuse at players on a sporting field.. let alone anything like this to India. If you’re not here to watch the cricket, and can’t be respectful, get OUT. #AUSvIND

Four men being escorted away by police. Disgraceful behaviour.

An over later the tea break was called upon and the Indian head coach Ravi Shastri was seen having an animated discussion with the security officers. Following allegations of Siraj and Jasprit Bumrah copping racial abuse from the crowd yesterday, the BCCI Vice-President, Rajeev Shukla had said the following to ANI:

“We have come to know about the issue. Cricket is a gentleman’s game, and these kinds of things are not allowed or accepted. The team management is dealing with the matter. The BCCI as well as the ICC is aware of it and there are ICC rules and provisions which forbid anyone from making comments that are racial in nature. 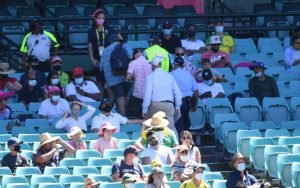 “In spite of that, if somebody is using racial comments, I think the Australian court should take cognisance of it, and these kinds of incidents must be prevented. There is no place for such acts, and these kinds of things are not allowed or accepted. I think every board should take cognisance of it and take strict measures to ensure such acts aren’t repeated.”

The CA’s Head Of Security and Integrity, Sean Carroll, had also condemned the incident.

“Cricket Australia condemns in the strongest terms possible all discriminatory behaviour,” said Sean Carroll, Cricket Australia’s Head of Integrity and Security. “If you engage in racist abuse, you are not welcome in Australian cricket.

“CA is awaiting the outcome of the International Cricket Council’s investigation into the matter reported at the SCG on Saturday. Once those responsible are identified, CA will take the strongest measures possible under our Anti-Harassment Code, including lengthy bans, further sanctions and referral to NSW Police.

“As series hosts, we unreservedly apologise to our friends in the Indian cricket team and assure them we will prosecute the matter to its fullest extent.”