Sri Lanka opener Pathum Nissanka was involved in a contentious caught-behind dismissal during the opening fixture of the 2022 Asia Cup against Afghanistan, with plenty of debate surrounding the third umpire’s reading of the UltraEdge.

Nissanka was adjudged caught-behind by umpire Anil Chaudhary, after taking on a Naveen-ul-Haq delivery and seemingly nicking it through to wicketkeeper Rahmanullah Gurbaz. Nissanka, after a lengthy deliberation with non-striker Danushka Gunathilaka, decided to refer the decision to the third umpire, moments before the DRS clock timed out.

Third umpire Jayaraman Madangopal went through the footage, and upon observing a minute, continued tremor on the chart, proceeded to uphold Chaudhary’s decision and rule Nissanka out. The decision was followed by collective disbelief from the Sri Lanka camp – coach Chris Silverwood was seen with his hands in the air, with cameras also capturing other team members’ exasperation.

“That’s very interesting what we’ve just seen,” said on-air commentator Sanjay Manjrekar. “I have never seen a batsman given out for a slight murmur on the UltraEdge. Normally you look for the huge spike. Just the way the dialogue was going on with the third umpire, he looked at a very still line, and then he saw a little tremor. And it’s a little unfair on the batter.”

“But the flicker was right through, wasn’t it?” said co-commentator Russel Arnold, suggesting that the slight flicker had continued from before the ball had passed the bat.

“Yeah, I have never seen something like this happen,” Manjrekar said. “Umpires generally wait for a spike to appear. There was no spike at all, if at all there was a little bit of a tremor right through that UltraEdge, which is a brilliant technology, hence everyone’s shocked.”

The on-air conversation between the commentators continued well after the dismissal. 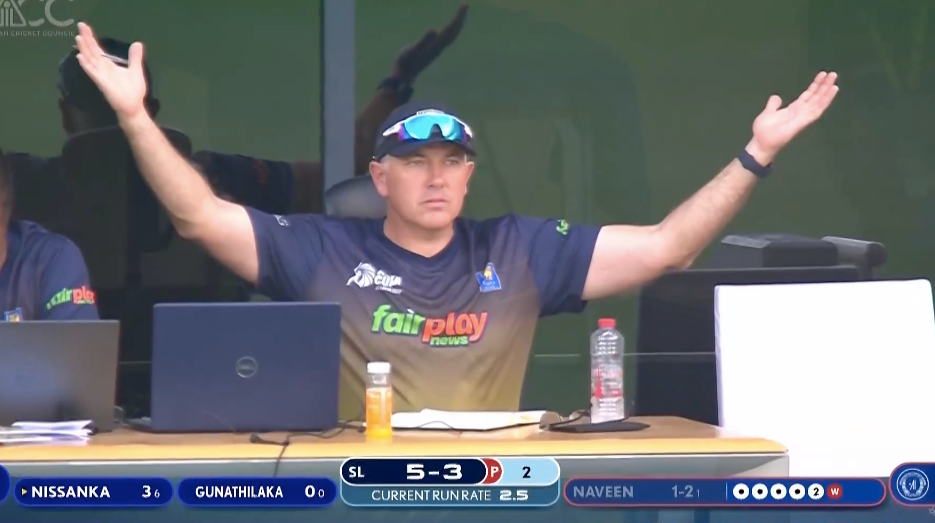 “Couple of things I want you to dwell on, Russel,” said Manjrekar. “One is, why did the batter take so long to go for the review? And obviously, the reactions, what we saw on UltraEdge.”

“Yes, that was surprising,” Arnold said. “Generally, you know you have nicked it. Unless at the same time, the bat hits the ground where there is a bit of jarring.”

“What is the actual reality?” Manjrekar said. “Maybe there was a feather, with the way the keeper and bowler reacted but finally TV umpires are entrusted with the job of looking at technology to come up with a decision. And he had to rely on this – and was this enough?

“Sanjay look, this tremor has been coming all along,” Wasim Akram noted. “Look at the reaction of the keeper – straight away he was up in the air.”

Russel Arnold entered the conversation again, pointing out that the tremor on the chart was from before the ball hit the bat.

“I’m with you [Wasim]. That’s what my point is,” Arnold said. “That tremor was there before the ball got to the bat earlier in the picture, which is not something that appeared when the ball passed the bat.”

“Let me throw in another thought,” Manjrekar continued. “You guys heard a click through the stump microphone. The umpire would have heard it as well. Whether that would have influenced the decision at the end…”

“We would have heard it on the conversation, wouldn’t we?” Arnold replied. “We hear the umpires speak. It was about the tremor. Nothing else. Then we would have investigated further.”

On social media, there were plenty of reactions surrounding the dismissal:

Pathum Nissanka has just been given out caught behind in Sri Lanka's Asia Cup opener against Afghanistan.

He reviewed it, and this was the UltraEdge reading. The 'out' decision was upheld.#AsiaCup2022 pic.twitter.com/EDSBWrNp7y

Never saw any spike on the ultra edge re Pathum Nissanka's review. Horrible decision by the 3rd Umpire Jayaraman.

Err… since when did that qualify as enough evidence of an edge? pic.twitter.com/tY8LTNbFsh

And that is a terrible terrible decision from the third umpire. Cricket has lost logic now, teams sending swing watchmen for openers, third umpire gives a not-out, the only spike there was of incompetency. #SLvAFG

Pretty strange! It was just a murmur on the Ultra Edge, not a spike.#SLvAFG #AsiaCup2022