After bowling Pakistan out for 240 on the opening day at The Gabba, Australia’s opening partnership of David Warner and Joe Burns alone nearly shaved off the deficit to put Australia in supreme command of the first Test. Akshay Gopalakrishnan picks out six balls that defined the second day’s play in Brisbane.

Few things can be more frustrating for a fielding team than an edge falling short of a fielder. Never mind the sledges, this is the worst kind of teasing a cricketer can go through. On Friday such signs made an early appearance.

When Imran Khan landed his first ball of the day short and wide of Joe Burns, the opener cut tentatively at it and got a bottom edge for his troubles. To his good fortune, and Pakistan’s annoyance, the ball dropped just short of the wicket-keeper, Mohammad Rizwan.

Stumps at The Gabba. Warner and Labuschagne have seen Australia through with an unbroken second-wicket stand of 90. Australia lead by 72 runs, with nine wickets and three days remaining in the Test. #AUSvPAK https://t.co/qUtglOaXG2 pic.twitter.com/9LZCpvcpGm

It was an early indication that Pakistan would have a long and miserable day on the field. Four balls later, Imran sent down another short ball, well outside the off stump, and Burns this time unleashed an imperious cut over backward point for four. The stage was set.

While Warner deservedly hogged the spotlight for his superb century, Australia recorded another important hundred on the day. When Burns tucked a shortish ball from Naseem in front of square for a brace, it brought up Australia’s first century partnership for the first wicket in 18 innings. After averaging 8.5 for the opening partnership across ten innings in the Ashes series in England, this was a huge step-up.

That landmark had come in the last over before lunch, and by the interval, Warner had moved to a stroke-filled half-century, while Burns had played some eye-catching strokes of his own to move to 41. And though Naseem shocked Burns with a short ball that the batsman took his eyes off to cop a blow on the arm, Australia had barely been challenged all morning, having moved along at a comfortable rate of four runs an over.

Maiden Test wickets are always special, not least when the wicket turns out to be that of one of the generation’s finest openers, while he’s batting on a half-century. But there are little details that cannot be missed at any cost, and sport is uncompromising in those regards, as 16-year-old debutant Naseem found out. 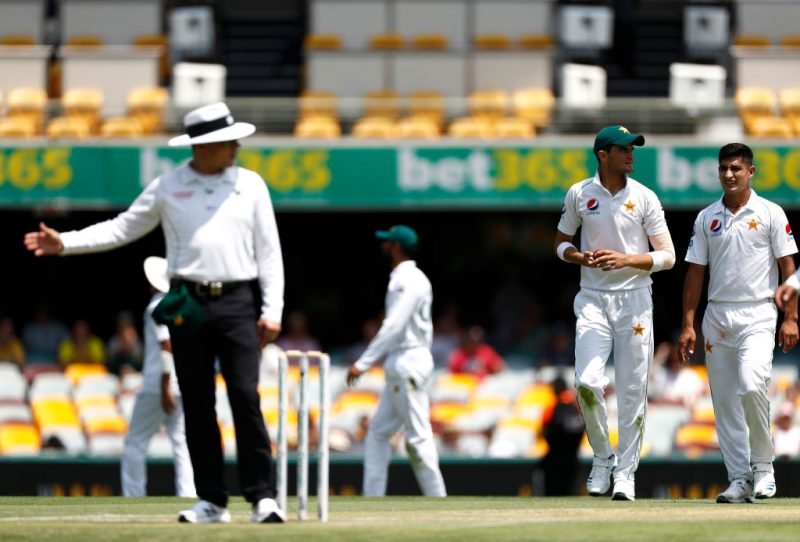 Having tempted Warner to have a go at a wide length ball, albeit at good pace (143kph), Naseem found the batsman’s inside edge that was pouched by Rizwan behind the stumps. Elation followed as Pakistan celebrated with vigour the young sensation’s maiden scalp, only to be told later that they hadn’t earned the right to do so.

Having already overstepped on a couple of occasions and let off as the umpires failed to spot it, Naseem wasn’t third time lucky as this time he stepped over by quite some distance. Pat Cummins had been culpable of a similar discretion on the opening day, when he had Rizwan caught behind with his foot on the line. He managed to get away with it, though, as a referral upstairs, to the third umpire, returned a shocking decision. But no such luck for young Naseem, whose wait for a maiden wicket continues.

Perhaps nothing encapsulated the gulf between the two sides, and just how easy Australia had it on the day, as the last two balls of the 46th over. Iftikhar Ahmed, the offspinner, playing in just his second Test – and his first in over three years – had little idea of how he was to tackle a rampant Australia.

Warner crosses 150 and Australia go past 300, while Labuschagne's extraordinary consistency has nearly translated into another fifty. Australia lead by 65 runs, can these two see them through to stumps? Follow the game live here. #AUSvPAKhttps://t.co/3kDr7qHB9b pic.twitter.com/8QVAbv1KwG

On the penultimate ball of the 46th over, Iftikhar offered Burns generous amounts of flight, and the batsman gleefully accepted it to skip down the track, get inside the line of the ball, and launch it over mid-off for an authoritative four. That upset Iftikhar, who with his next ball overcompensated with his line and smeared it on the batsman’s pads. Batting on 72, this was a gift tied in a ribbon for Burns, who easily dispatched him with a sweep that went wide of fine leg, to the boundary.

When Warner ran Yasir Shah down to third man off the penultimate ball of the 49th over, he moved to 95 – the same number of runs he’d returned with after ten innings in England. Then, off the last ball of the bowler’s next over, Warner pressed him into the gap at covers and ran the first run hard. But though his partner willingly obliged, Warner turned down a potential second, which meant that he would break for lunch on 99. 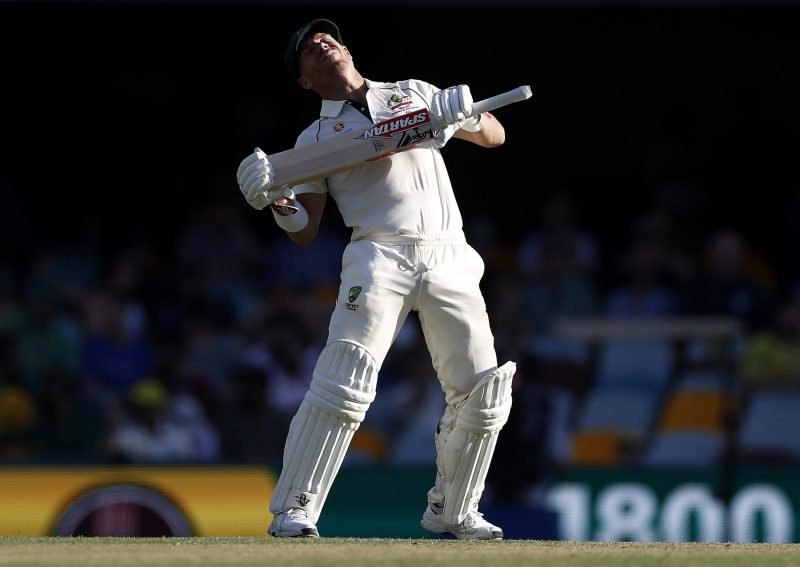 After 40 minutes and six balls, he finally had his moment when Yasir pitched short and Warner tucked him through square for a single and mounted his trademark celebration, filled with a leap and a delightful roar amid warm applause from The Gabba.

Exactly an over later, Warner and Burns celebrated their 200-run stand with a neat drive through the covers, aided by a misfield, as Australia continued in their merry ways.

Having played superbly all around the field, it eventually took a strangle down the leg side to end Burns’ resistance and give Pakistan a breakthrough. Going around the wicket, Yasir tempted Burns with a juicy flighted ball that the batsman instinctively got down to sweep. However, the drift into him, along with the turn, meant that Burns was cramped for room, and he eventually dragged the ball, off the bottom edge, onto the stump 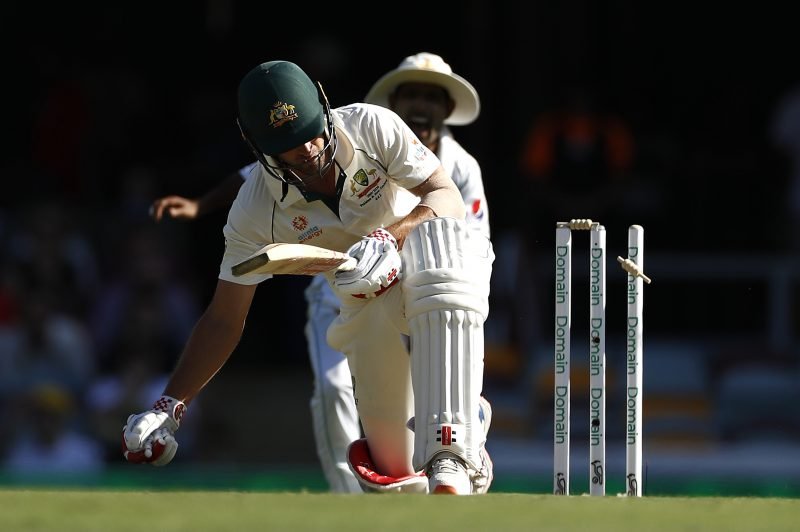 Having toiled for over two sessions, Pakistan finally had a moment to smile about, as a distraught Burns trudged off reluctantly, even as his home crowd showered him with cheers. As it turned out, the respite was short-lived, as Warner marched on, undeterred, and in the company of the amazingly consistent Marnus Labuschagne, who notched up yet another half-century, saw Australia through to stumps, with a lead of 72 runs, and nine wickets intact.