Chennai Super Kings had a new hero on Tuesday, May 22 as Faf du Plessis scored an unbeaten 42-ball 67 in Qualifier 1 to help them beat Sunrisers Hyderabad by two wickets in a thrilling low-scoring encounter.

The victory helped Chennai become the first team to reach the IPL 2018 final.

In a game in which the momentum changed hands again and again and the bowlers’ ran riot, du Plessis’s knock stood out.

He hasn’t been a regular in this Chennai side – it was just his fifth appearance this season – but he left an indelible mark on the tournament with the match-winning effort.

The @ChennaiIPL have beaten #SRH by 2 wickets and are through to the #IPLFinal for the 7th time. On Sunday, they will be gunning for their third title. #VIVOIPL #SRHvCSK pic.twitter.com/2qJTXM94vD

It was a patient knock for the most part. He walked out to open after Hyderabad scored 139-7, but saw his partners fall by the wayside as Chennai became 62-6. So he hung in there and inched along before turning it on in the death. He scored just 21 runs in his first 24 balls. In the next 18 deliveries he faced, du Plessis hammered 46.

The idea was to see off Afghanistan leg-spinner Rashid Khan, who was a handful, returning 2-11. “Sometimes the game seems out of reach, but you keep sticking in,” said du Plessis. “Shardul (Thakur) came in and hit some boundaries, and everything went our way. Rashid was a real handful, so just happy to cross the line. Rashid was tough to pick, (it’s) so hard to take him on. So, try to get through him as much as you can.

"He's really proud of this team, and he's like the big brother of the team"

“It’s nice to contribute since I haven’t played much. Yesterday, I was just reflecting on my past games, and took some confidence from that mentally. I just entered the changing room now, and asked the boys, ‘how did we win this, guys?'”

Du Plessis also touted Rashid for bigger and greater feats in Test cricket – Afghanistan will play their maiden Test against India in June. “Rashid’s the best leg-spinner in the world,” du Plessis told Star Sports. “He’s going to pose a lot of challenges when he comes to Test cricket. He will win you games on his own, and that’s why you have to respect his bowling. We watch a lot of footage, but he’s still so hard to pick.” 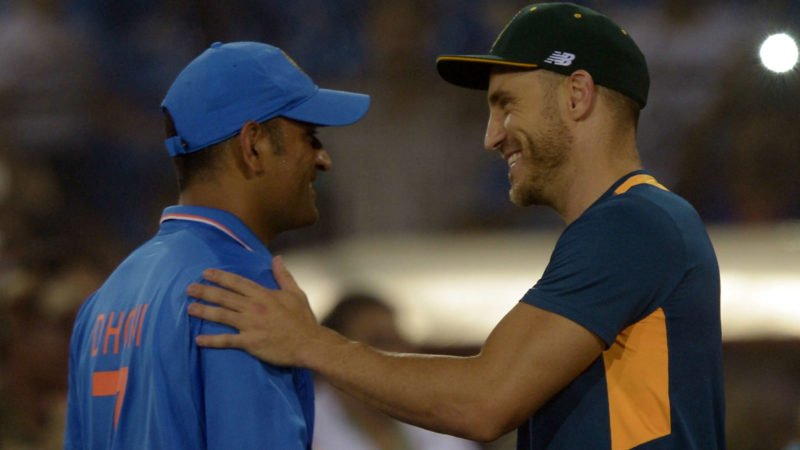 “He’s really proud of this team, and he’s like the big brother of the team, so it’s nice that most of us are back here” – du Plessis on Dhoni

The real turning point came in the 18th over off Carlos Brathwaite. Chennai needed 43 runs at that point, but du Plessis targeted the Windies T20I captain’s medium-pace bowling, picking 20 massive runs off the over.

“Me, personally, in that situation, I felt that I needed to take all the risk against Carlos,” said du Plessis. “His slower ball is not that much different than his (normal) pace. So even if he does (bowl a slower ball), you can trust your swing, so that’s what I was hoping for. And that’s the over we both (Thakur) targeted.”

This is Chennai’s seventh final in nine IPL seasons. It will be the eighth final appearance for MS Dhoni, their captain, who reached this stage with Rising Pune Supergiant last year as well.

Du Plessis revealed the veteran skipper was as determined as ever to win the tournament. “Haven’t spoken to MSD yet, but what I can tell you, is having joined back at CSK and played with him for Rising Pune Supergiant last time, you can really say he wants it this time,” said du Plessis. “He’s really proud of this team, and he’s like the big brother of the team, so it’s nice that most of us are back here. Great to have that camaraderie in the ground.”