In 1996 an already star-studded Pudsey Congs side was supplemented by VVS Laxman, one of the most elegant batsmen ever to grace the game. Unsurprisingly, he scored plenty.

With half a lifetime’s experience as an academy coach at Yorkshire CCC, Pudsey Congs chairman Ralph Middlebrook has seen some cricketers come and go. In typically begrudging White Rose fashion very few get an overwhelming seal of approval, but there is one man in particular, Pudsey’s overseas pro in 1996, that makes the Bradford League stalwart beam with pride.

“VVS Laxman was a world-class gentleman,” says Middlebrook. “He was a credit to himself and to our club, and he didn’t mistime a ball the entire time he was here!”

In his one season with the club, Laxman, aged 22, hammered a club-record 1,253 runs including three consecutive hundreds. His run-scoring was a joy to behold, says Middlebrook, but it was his professionalism and attitude towards club life that set the Indian stroke-maker apart.

“There was no enormous financial package on offer as far as I was aware. The club put him up in a dingy little house in Stanningley for the summer and he used to walk to the club every day for training. No matter how many runs he got and how quickly his reputation grew, VVS remained level-headed. I remember how much he was prepared to listen about cricket. Any advice anyone gave him, he accepted and took on board.” 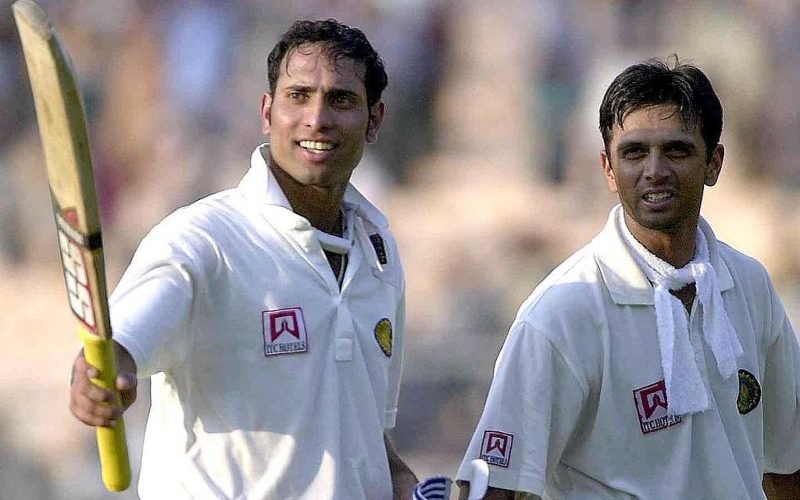 One for the ages: VVS Laxman and Rahul Dravid walk back after keeping Australia at bay for entire of the fourth day’s play of the famous Kolkata Test of 2001

One man who made a lasting impression on Laxman was Congs then-skipper Phil Carrick, a former Yorkshire captain who did the double of 10,000 first-class runs and 1,000 first-class wickets across a decorated 23-year career.

“Phil was instrumental in getting him to the club in the first place,” says Middlebrook. “VVS understood the experience that Phil had and he was taken under his wing. Phil was one of VVS’s very best friends, even after he left England. He was invited to his wedding.”

“He said you and VVS will play Test cricket against each other, and we both laughed at him, but he was right. We did”

Laxman had joined no ordinary club team. Alongside Carrick and a host of Bradford League legends, the Pudsey Congs team featured Ralph’s son James Middlebrook – the future Yorkshire and Northants all-rounder – and Matthew Hoggard. Hoggard later recalled a prediction from Carrick: “He said you and VVS will play Test cricket against each other, and we both laughed at him, but he was right. We did.”

Sadly, Carrick didn’t live to see his prophecy realised. After he died from leukemia, aged 47, four years after Laxman’s departure, the Indian wrote to the club to express his condolences. He also tweeted a heartfelt tribute to Carrick earlier this year.

@cricketyorks Learnt a lot playing under Phil Carrick at the Pudsey Congs.Phil had a big influence in shaping my career?Miss him? https://t.co/fwsLvAWLwp

Laxman retains a close connection to the club. During his time with Lancashire, and on occasions when media commitments have delivered him to northern climes, he has returned to Congs on a handful of occasions.

“He turned up unannounced with his family one time to show them the club and surprise a few people,” recalls Middlebrook. “The problem was he got his dates mixed up and ended up at a second-team game. You won’t believe this, but no one recognised him! He wasn’t the sort of bloke to go up to everyone and say, ‘I’m the great VVS Laxman’, so he spent the day watching the game and then left.”

Nearly 9,000 Test runs later, Middlebrook says no one at the club is particularly surprised by Laxman’s achievements, and debate rages as to whether he is the best Bradford League player of all time. In Hobbs, Sutcliffe, Hutton, Qadir, Laker, Yousuf and Kumble, to a name but a few, he has some distinguished competition.

“It’s no great surprise that he went on to achieve what he achieved. To play for India you’ve got to stand out, and from his very first net session you could see that VVS Laxman was a very special cricketer. The Bradford League has had some of the greatest players in the history of the game, but it would certainly be difficult to exclude him from the debate. He never bruised a ball all summer!”