The Little Yellow Bible gets the treatment.

The physical experience of reading Wisden Almanack is unchanged by the years. Short and squat, a giant spine and tiny point size for its 1,148 pages, it is from another, fustier age.

But under Lawrence Booth it has become an arresting focal point amid the flaky instantaneousness of social media, a glacier in the seas of Twitter, a reminder of the power of the written word. He is a sparky, spiky, modern editor, unafraid to take thunderous aim at the game’s fads and foibles, and especially its often indifferent administration – he has, memorably, had Giles Clarke shouting at him in the Long Room at the Almanack’s annual dinner.

Wisden Cricketers of the Year announced – and it’s historichttps://t.co/Hldr5lZgqo

The agenda for 2018 was laid out clearly a few weeks ago with the cover reveal: Anya Shrubsole sat beneath the traditional woodcut, the first woman player to do so. The selection of the Almanack’s five cricketers of the year includes Shrubsole and two of her teammates in England’s World Cup win, skipper Heather Knight and all-rounder Natalie Sciver. It will make headlines, it will stir the pot, but why not? This is a staging post along the way – true equality will come when the inclusion of women players becomes unremarkable.

It is no token doff of the cap to one outstanding cricket match, either. In his Editor’s Notes, Booth credits the ECB’s (and Giles Clarke’s) investment of both money and energy in the women’s game while adding that “more must be done”. 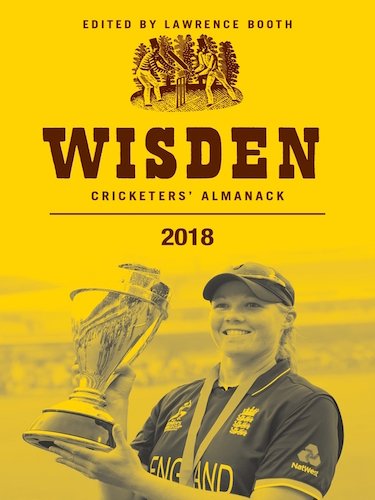 The Almanack includes an extraordinary and moving piece by Tanya Aldred on cricket and sexism, headed “Too Ugly To Be Raped”, a reference to an online comment directed at The Times cricket reporter Elizabeth Ammon. It is stark and shocking: Aldred builds a picture of cricket’s “unapologetically male gaze” and its effects, from the Indian condom company that made an advert referencing Chris Gayle’s on-air pass at Mel McLaughlin (funny, ha-ha) to the time Aldred herself was groped by a male international player, and the suicide of 17 year old Haleema Rafique after a PCB inquiry into the sexual harassment of five women players at Multan Cricket Club in 2013 (not so funny now, is it…) Cricket’s ‘Me Too’ moment still lies ahead.

Writing before ball-tampering in South Africa, Booth calls the recent men’s Ashes series, “a stinker: one-sided, often boorish and dulled by pitches stripped of their old character”. He has invited the ECB’s Tom Harrison to present the favourable half of the domestic T20 league debate, and then commissioned the estimable George Dobell to put the other side (Dobell has recently been threatened with legal action by the ECB for his writing at ESPNcricinfo about Harrison’s Chairman Colin Graves). Booth congratulates the ECB for “waking up” to the longstanding British Asian participation problem, and then challenges their obsession with the 2019 World Cup and white-ball cricket.

Wisden too must make its accommodations with that. It introduces a new section, on Overseas Domestic Twenty20 Cricket, and offers a new award, to the Leading Twenty20 Cricketer In The World. This goes, deservedly, to Afghanistan’s Rashid Khan, and counterbalances slightly India’s relentless dominance: Mithali Raj is the Leading Women’s Cricketer In The World after becoming the greatest run-scorer in the history of ODIs, while Virat Kohli (natch) retains the title of Leading Cricketer In The World. With Steve Smith gone, he may need to clear more space on the mantelpiece. It is hard to see anyone else challenging his incandescent brilliance with the bat or his commercial clout.

Jarrod Kimber finds himself at the tip of a new arrow, immersed in the world of T20 stats: are they reflecting performance, or driving it? Zafar Ansari offers an eye-catching piece on his decision to retire; Simon Wilde, ahead of his new history of English Test cricket to be published this year, looks back on 1,000 Test matches; and Harry Pearson mulls a half-century of overseas players in county cricket, a story full of mellow, sunshiny nostalgia.

And as always its in the esoterica of the game that the Almanack excels: Gideon Haigh on cricketers’ mannerisms, Kamila Shamsie on the year’s cricket books, Mike Selvey on new-ball partnerships and Matt Thacker, with a short but lovely story about discovering the origins of the Almanack’s famous woodcut on a visit to Don Bradman’s house at Bowral, add to that joy.

In his preface, Booth notes another amendment: “we are tweaking our abbreviation of the rarest type of bowler: SLC (slow left-arm chinaman) becomes SLW (slow left-arm wrist spin).” Heavyweight and hearty, the Almanack is busying itself for the next 150 years in a restless and challenging world.