Kedar Jadhav, who returned 3-23 in India’s eight-wicket victory over Pakistan on Wednesday, September 19, believes sticking to the processes, and his limits, is the reason for his success with the ball.

The 33-year-old part-time spinner with a unique side-arm action returned his best ODI figures against Sarfraz Ahmed and his men at Dubai International Cricket Stadium, helping India by breaking through at crucial junctures of the game. His victims were Ahmed, Asif Ali and Shadab Khan.

“We try to do what we’re expected to do – bowling in the right areas, you know, keeping the pressure while the fielders are in the circle. If we stick to the processes, the results will take care of itself, and that’s what I feel is happening,” he said afterwards.

Bhuvneshwar Kumar and Kedar Jadhav star with the ball as Pakistan can only muster 162 batting first in Dubai. A special performance needed from their bowlers – India need 163 to take the bragging rights!#INDvPAK LIVE ➡️ https://t.co/hTP8b9pgdQ#AsiaCup2018 pic.twitter.com/aEfDzD9Cwa

Jadhav, who was out for a long while after a grade-2 hamstring pull during the IPL, feels the injury and the subsequent recovery period helped him grow as a cricketer.

“I feel my fitness has improved after my surgery, and in the last four months, I have learnt a lot about training and fitness. It has definitely helped me and has made me a different cricketer,” he said.

“Every time I did my rehab previously, I used to start playing, (thinking) that the problems won’t come back again. Many a time I also used to miss my routine, but now, regardless of how I feel, I start my day with either gym or running. That gives me confidence that I’m getting stronger and fitter every day, and that helps me on the field.”

Comprehensive – How was that for a performance. #TeamIndia clinch the 2nd ODI against Pakistan by 8 wickets ?????? #AsiaCup #INDvPAK pic.twitter.com/3n2BqCKbuq

Jadhav’s nine-over spell put India in the driver’s seat against Pakistan, and it was especially important for him to do well after Hardik Pandya had to be stretchered off because of a back injury.

“I don’t bowl much in the nets. Honestly, I just bowl a couple of overs in the practice session before a match. I think if I try and work on my bowling in the net sessions, then whatever is there … it might get broken. So I stay in my limit,” Jadhav said.

While India have a lot of positives to take from the game, Pakistan must raise their game in the Super Fours. Especially their batting, after the Indians shot them out for just 162 in 43 overs. 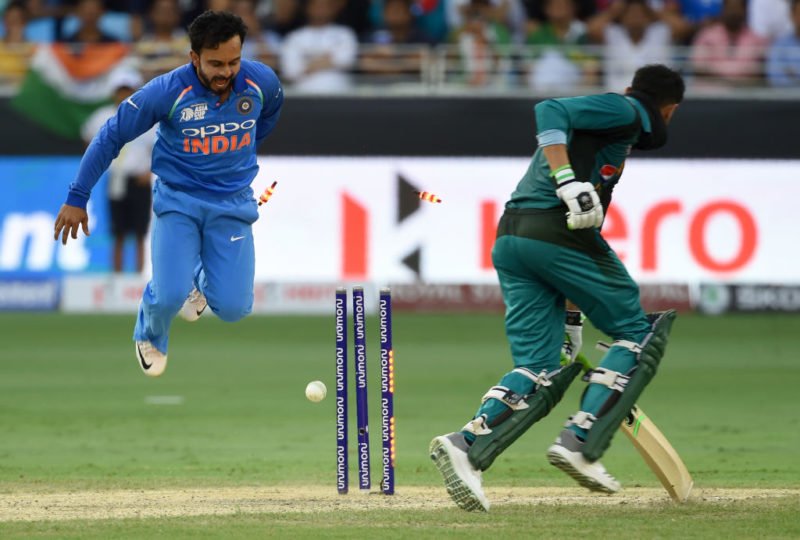 Jadhav picked up three wickets as Pakistan folded for 162

“We sort of batted outside our roles, which was very disappointing. Imam-ul-Haq, it’s not his role to be running down to Bhuvneshwar Kumar in the third over. It’s not Sarfraz’s role to be hitting over the top and getting caught out there. We’ve got X-factor guys whose role it is to do that,” said Pakistan head coach Mickey Arthur.

“If Fakhar (Zaman) gets out playing that way, it’s OK. If Asif gets out like that, it’s OK, because that’s his role. But the other four batsmen certainly need to take responsibility.

“(It was) the pressure that told on Imam. As I said, out of his role, he had two off eight balls or whatever, but Fakhar had just faced a maiden. He tried to have a go, he tried to hit the ball that’s not in his area. I do think there was a little bit of pressure.”

The experience and pedigree of the Pakistan bowling attack kept their hopes up after the poor show with the bat, but with an 86-run opening stand between Rohit Sharma and Shikhar Dhawan, only one result was going to be possible.

“On a wicket like that, you need to strike really early if you’re going to defend it. We didn’t strike early enough. But, saying that, we went away from our plans too quickly. We said that our batters batted outside our roles and that wasn’t acceptable,” acknowledged Arthur.

“With our bowling, we went outside our plans far too quickly. We wanted to bowl hard lengths, hit the top of off stump. It was tough to score then. There was a bit of panic when they didn’t strike early. We panicked and went away from our plans.”