India may be flying high in T20I cricket but they need all-rounder Hardik Pandya back in their line-up, writes CricViz analyst Patrick Noone.

India have just won a T20I series 5-0 away from home. Their defeated opponents, New Zealand, were the beaten finalists in each of the last two 50-over World Cups and memorably beat India on their own soil in the last edition of the T20 World Cup. Therefore, the series result should not be sniffed at and at face value, India are in a very good place ahead of the next ICC global event in October.

However, despite the impressive nature of the scoreline and the manner in which India held their nerve in a number of extremely close finishes against the Black Caps, there remains a feeling that India are still struggling to pin down their strongest XI in the shortest format. Often their T20I side appears to be in a constant state of flux, with players shuffled up and down the order or in and out of the side, with radical ideas – such as Shivam Dube batting at number three – trialled and then quickly abandoned. The net result is that there are arguably more questions than answers about how exactly India will line up in Australia in eight months’ time.

There is plenty of debate to be had over the relative batting merits of Sanju Samson, Shreyas Iyer and Rishabh Pant while the fact that KL Rahul is not always guaranteed his spot in the team is indicative of India’s embarrassment of batting riches. All four would walk into most other T20I sides yet India are forced to tinker perhaps more than they would like in order to give everyone a fair crack.

One player who was conspicuous by his absence during the five matches in New Zealand was Hardik Pandya. Nursing a back injury, the all-rounder has only appeared in two matches since last year’s World Cup and has not played any cricket at all since September. India have missed him badly.

Hardik’s presence in this India XI solves so many problems that there is a case to be made that he is their most important player in the format. Of course, both Jasprit Bumrah and Virat Kohli have pretty formidable cases to be put forward for that honour as well, but the balance that Hardik provides is invaluable.

Finding a genuine all-rounder to balance the side is nothing new in cricket. It’s been the holy grail for many a team across all formats for as long as anyone can remember; to have a player who can bat in the top six and offer serviceable overs with the ball. Hardik gives India exactly that in T20Is and without him, there is the constant upheaval and rearranging of deck chairs that we’ve seen over the last couple of years as India struggle to find a formula that covers the skills he has.

Since the 2016 World T20, only four seamers in world cricket have taken more wickets as a fourth or fifth option than Hardik. He’s not always the most economical – he’s conceded his runs at 8.72 runs per over in that time – but he’s shown that happy knack of picking up wickets when needed and is good enough to be relied upon to bowl his full quota more often than not. 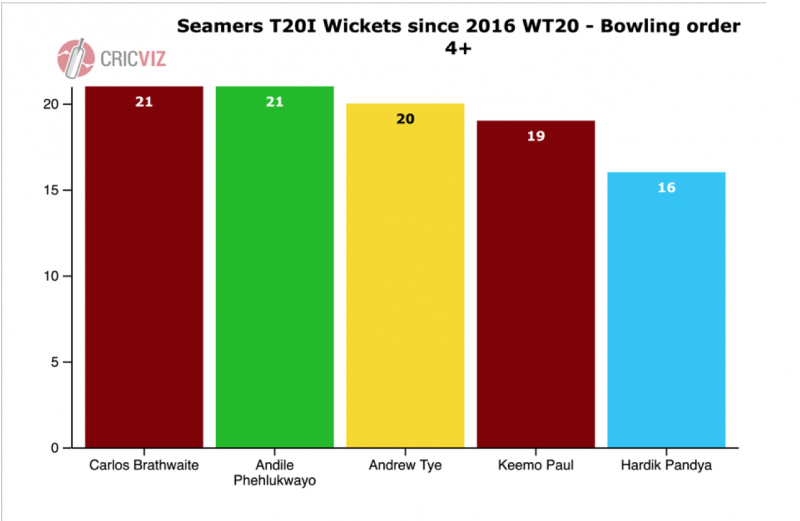 By way of contrast, Shivam Dube, the man given the unenviable role of replacing Hardik in the New Zealand series conceded 11.33 runs per over across the five matches, did not once bowl his full allocation and suffered the ignominy of conceding 34 runs from a single over in the final match.

Dube’s struggles had the knock-on effect of India needing to cover themselves in the bowling department, which in turn meant their batting was weakened by having to play one of Washington Sundar or Ravindra Jadeja at number seven.

Jadeja has shown himself to be a fine batsman in the longer formats, most recently and perhaps most pertinently against New Zealand in last year’s World Cup semi-final. However, he has never been able to translate that form with the bat into the T20I arena. A strike rate of 101.76 and a high score of 25 illustrate that he has rarely been able to play the kind of innings that modern T20 sides need from their lower middle order batsmen.

When batting in the top seven, Jadeja’s strike rate is a touch higher at 105.40, but that still ranks him as the slowest scoring batsman to have batted 10 or more innings in the top seven for India. For all of his undoubted qualities as an all-round cricketer, Jadeja is not a player who can replace Hardik the batsman, who is at the other end of list with a strike rate of 147.61. 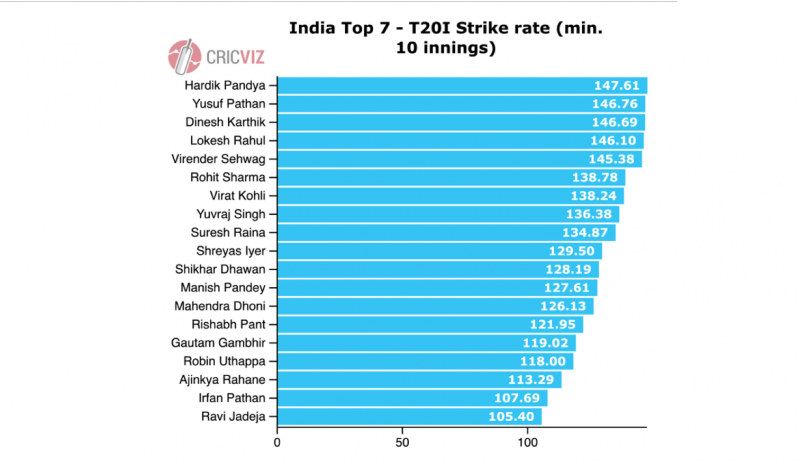 India are scheduled to play 12 T20Is before the World Cup. There will likely be more tinkering with the seemingly endless resources of batting talent they have at their disposal as they try to settle on a formula to claim their first triumph at a global tournament since 2013.

One argument is that it hardly matters which combination they go for, given the calibre of players they’re picking from; that any XI India throws together will be capable of challenging in Australia, and a 5-0 series win certainly strengthens that point of view.

Related Story: How could India replace Ravindra Jadeja for the T20 World Cup?

But the counter point is that T20 is increasingly becoming a game defined by the barest of margins. India came out on the right side of some tight matches in this series, but they might not be so lucky when the tournament comes around, therefore picking the side with the right balance that gives the best chance of winning is a more subtle art.

Hardik’s stock has risen during his enforced absence but upon his return, it’s hard to make a case for a scenario in which he’s not one of the first names on the team sheet.