Rajasthan Royals are having a middling season. It’s the classic campaign for those punching around in the lower ends of the Indian Premier League: living off scraps, hoping for stars to find form, a handful of notable wins holding the playoffs just within reach. The cult-hero status of Rahul Tewatia has been a ray of hope in the Royals’ year, his straightforward but effective hitting – alongside his canny leg-spin – a pleasing counter to the grooved excellence elsewhere. Jos Buttler has shown class but only truly got going once or twice. The much-vaunted youth of Kartik Tyagi and Riyan Parag have won matches, but been inconsistent – as you would expect. Right now they sit fifth in the table with 8 points, likely needing three wins from four to qualify. A puncher’s chance, you’d say.

However, one man stands out. Jofra Archer, fresh off the back of a mixed international summer, is having a remarkable campaign out in the UAE. He may be mixing with some special players, the world’s finest T20 performers, but Archer is the Ferrari in a Porsche dealership. Beauty all around you, but he still draws the eye. This season, Archer has recorded an economy of just 6.75rpo, and has taken 13 wickets at a rate of one every 18 balls. All other Rajasthan bowlers have recorded an economy of 9.2rpo, and a strike rate of 32. In a slightly ropey Rajasthan team, Archer has excelled, shouldering the burden of an entire franchise and doing so with relative ease. He is streaks ahead of the other bowlers, the wind on which their season is sailing.

Of course, we know Archer is a superb bowler in this format, but this season is topping even his own high standards. His Powerplay economy rate, 4.9rpo, is the lowest he’s ever recorded in a T20 competition; his strike rate in the middle overs, 9.0, is similarly his personal best. Somewhere down the back of the sofa, he seems to have found another gear. 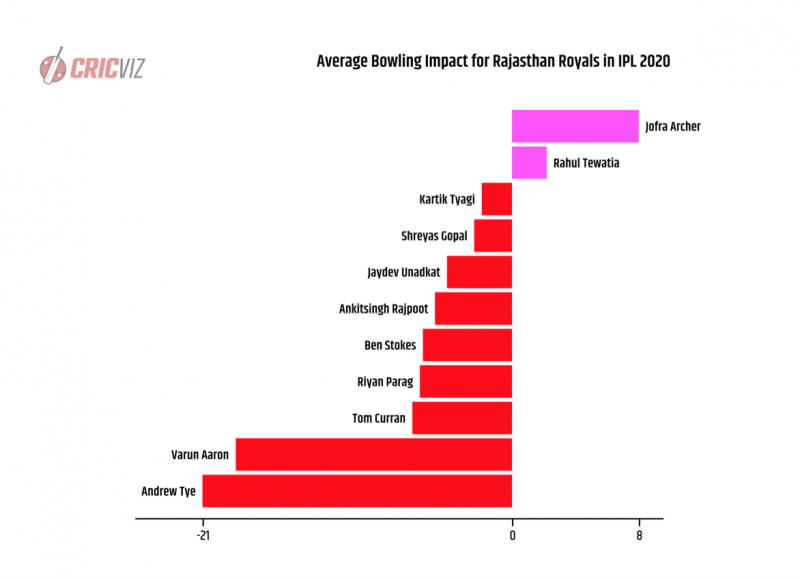 He’s dismissed David Warner, Shikhar Dhawan, Dinesh Karthik, and Faf du Plessis twice, plus plenty of others; he’s kept MS Dhoni, Eoin Morgan, Virat Kohli and Jonny Bairstow to below a run a ball. His Bowling Impact this season, +8.3, implies that per match Archer is worth 8.3 runs more than the average bowler. It also happens to make him the most valuable bowler in the competition this year. 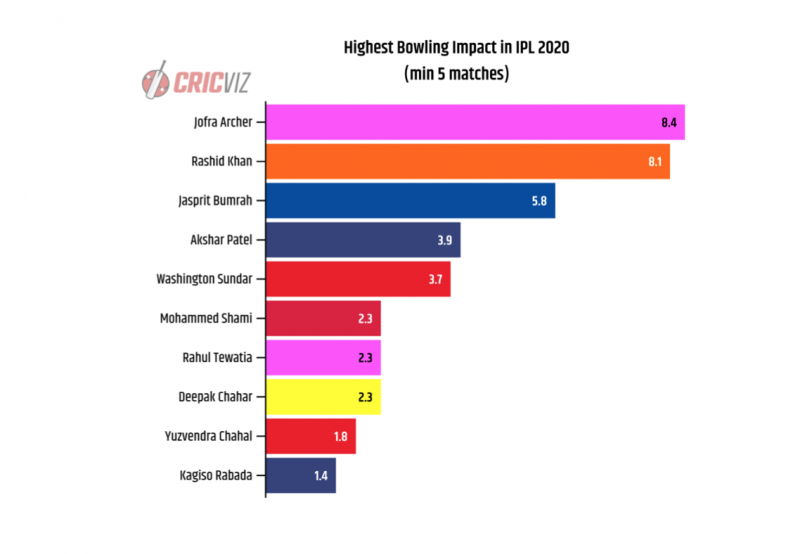 What’s more impressive, is that he’s been hitting these levels for a while. According to our Bowling Impact measure, two of the top 10 IPL seasons of all time have been from Jofra Archer, in the last two years. Currently, he’s the only bowler to record two seasons in the top 10. He still has time left this season to fall away from this elite performance level – but he doesn’t look like doing so. Archer has come off the back of one of the great IPL seasons last year, debuted for England, won a World Cup, then backed it all up with another world-beating IPL season. Right now, we are dealing with something, and someone, rather special. 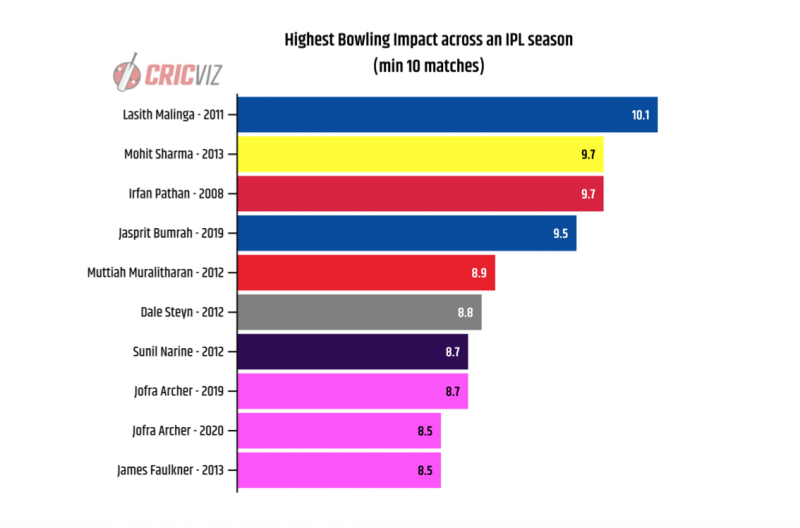 There have been tweaks to his method this season, which have helped him maintain his high standard, with the main one being that he’s moved away from slower balls. Since being confronted by the tiny boundaries of Sharjah, and the terrifying run rates which accompany them, Archer’s game has simplified. In those opening two matches, he bowled a slower ball roughly once an over, but since then that’s fallen to roughly once a match. He’s trimmed the fat from his game, and gone back to basics, targeting that heavy length just back of ‘good’, bowling as fast as his body allows him. Five of the 10 fastest balls in IPL 2020 have been from Archer’s hand, as have 44 of the top 100. He’s a quick bowler – and he’s bowled quickly.

So where is Archer, right now, in the pantheon of T20 bowlers?

You’d still have Rashid Khan over him, you’d say, despite the Afghanistan spinner’s slight recent decline. Sunil Narine’s action issues are ongoing and could arguably see him fall down the pecking order. Among seamers, there are candidates to be better in certain roles (Shaheen Shah Afridi as the new-ball attacker comes to mind, perhaps Wahab Riaz at the death), but all round you’d say that the only man who can hold a candle to Archer is Jasprit Bumrah. With an eye more closely trained on the present, rather than the recent past, you could even argue Archer has moved ahead of the Mumbai Indians man. 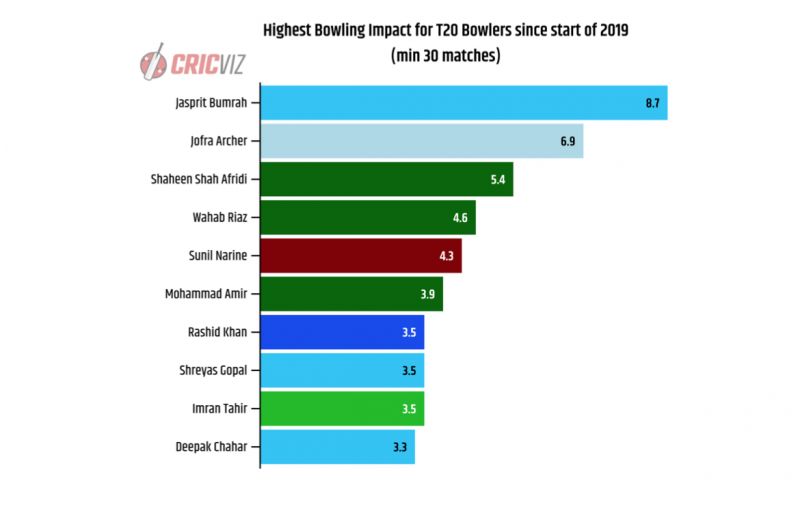 There is no need to reframe IPL performances simply as a conduit to international discussion – it carries enough weight and importance in its own right – but it is worth English fans taking note of Archer’s excellence this season. In England, Archer attracts an intense level of criticism and praise, all debates conducted in a heightened tone. He acts as the lightning rod for criticism about Modern Cricket, and perhaps in a more unpleasant angle, Modern Britain; equally, he is held up as the saviour of English cricket, the one-man answer to ‘How Can England Win in Australia?’ Both his successes and his failures are loaded with context and baggage, which he neither needs nor has asked for.

Away from English shores, Archer is just another bowler. There may be enforced overseas limits, but one of the best things about T20 domestic cricket is that nationality fades away a touch. It allows talents from less established nations to come through – Rashid Khan, Mohammed Nabi, Sandeep Lamichhane, Mujeeb ur Rahman – on a purely meritocratic basis, but it also insists that with the notable exception of Pakistan’s absence, the blunt agendas of patriotism are absent. Away from English cricket’s issues with modernity, what you’re left with is Jofra Archer as simply one of the world’s greatest bowlers. He’s adored, accordingly.

Archer is a phenomenal bowler, a rare player who can match speed with accuracy and cricketing intelligence. Any T20 side in the world would be over the moon to have him. Rajasthan’s season is a succession of gambles and hopes and dreams, pinning themselves to the consistent, immense, and irrepressible Jofra. It’s testament to his brilliance that they are still – however distantly – in with a sniff of winning the whole thing.