Jason Roy’s under pressure, apparently. The vultures are circling, the knives are sharpening, the metaphors are drawing in. CricViz analyst Ben Jones examines the criticism around the opener’s apparent slump in form, and busts some myths that have creeped in.

As England head into their five-match T20 series against India, there aren’t too many places up for grabs, the vast majority of England’s side pulled into shape over the last two years. A decision needs to be made over Moeen Ali, or Sam Curran, at No.7. The final seamer, alongside Jofra Archer and Chris Jordan, isn’t quite nailed down.

Then last of all, the final batting places – an opening spot and perhaps another at first drop – are the subject of a tense and keenly fought battle. Dawid Malan, Sam Billings, Liam Livingstone, Alex Hales, James Vince, Tom Banton, and Roy himself are all in the race. Roy, the incumbent, has suffered something of a slump, and with so many guys breathing down his neck, speculation surrounding his place has grown.

For a moment, let’s put Roy’s international “slump” in context. In 2018, he had one of the great T20I years, averaging 30.11 and scoring at a remarkable 10.2rpo – a strike rate of 169, if you prefer – which is still the fastest any England opener has scored in a calendar year. In 2019, he didn’t play a match; then in 2020 he averaged 24.60, scoring at “just” 8.3rpo. While Roy’s consistency in terms of pure run scoring fell away, he scored quickly enough to cause minimal issues for his side.

Rather than him suffering a straightforward drought, there have been several factors in the criticism mounting around Roy. One, England’s untold riches in white ball batting, which puts inherent pressure on all but the most secure player in their line-up; two, the fact that like his colleague Dawid Malan, Roy’s domestic record was not a patch on his record with England; and three, the fact that this slump was so apparently skewed towards spin.

The last of these was the most damning – but in reality, isn’t quite the case. In the last two years of T20 cricket, Roy has averaged 30 against both pace and spin bowling, and has scored at almost identical rates – in fact, his record against spin (8.0rpo) is actually better than against pace (7.7rpo). Rather than just spin, the issue for Roy has specifically been the ball spinning away from him. Leg spinners, and left-arm orthodox bowlers, have caused him substantial bother.

CricViz: The issue for Jason Roy has specifically been the ball spinning away from him

Teams have cottoned onto it. In 2016-17, when he first emerged as an internationally recognised player, he faced pace 75% of the time, but since then it’s dropped to 65% – and almost all of that spin (70%) has been turning away from his bat. Still destructive, still feared, but Roy has become a very easy batsman to plan for.

Which brings us to the forthcoming series against India. Five matches against a world-class side in home conditions, six months out from a World Cup in those very surroundings. From the little T20 cricket we have seen at the new stadium in Ahmedabad, England can expect the pitch to spin.

In order to target Roy’s weakness, India will have to adapt their usual plans a touch, and in doing so perhaps move away from their bowlers’ usual strengths. For Delhi Capitals, Axar Patel is not a significant Powerplay threat; in the last two IPL seasons, he’s taken just four wickets in the first six overs, at a strike rate of 33. Yuzvendra Chahal has taken the new ball at times throughout his career, but in the last two IPL seasons he’s also taken just three Powerplay wickets at 33. Excellent T20 bowlers, both of them, but neither of them at their best early on in the innings. Yet the temptation will likely be too great; one of those two will probably open up, given the opportunity to attack both Roy and Buttler with bowlers they are not suited to facing.

And so Roy will be faced with two options. He can try to scrap, play the spinners out, and look to capitalise at the other end, or he can fight fire with fire, and attack. From a selfish perspective, looking at his average – which many pundits and journalists will hold against him, were it to fall too low – Roy may want to opt for survival above all else. Yet for England’s broader tactical plan, Roy’s rapid starts are crucial. 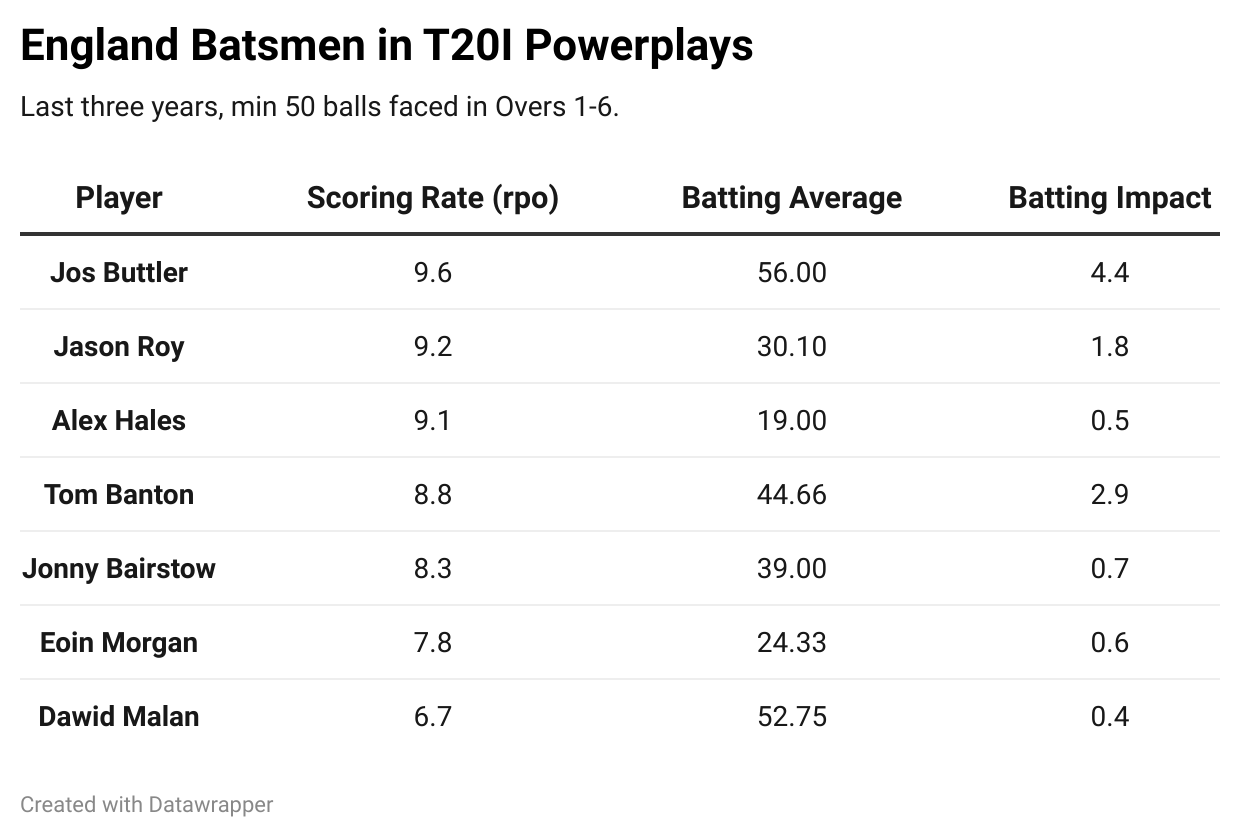 CricViz: Jason Roy’s batting Impact in the powerplay overs is +1.8

Given the remarkable depth they always maintain. In the last few years of T20I cricket, Roy scores quicker in the Powerplay than any other England batsman barring Jos Buttler. His Batting Impact in the phase, +1.8, is bettered by only Buttler and Banton. Roy is England’s Powerplay specialist, making the most of the field being up, and then letting the others take over. The risk of someone up the order chewing up too many balls at a poor strike rate is greater than them being bowled out – and Eoin Morgan has made this clear. In an excellent interview with Steve James in the The Times, the England captain said:

“Because we bat so deep and guys can score at such a good rate it is not volumes of runs that matter, it is actually opportunity while you are batting, so how you maximise each ball, each over as a batting unit. It’s not about building an innings, it’s not about batting around one man, it’s about opportunities to score and how quickly you can initiate that.”

Plenty of people have read that very eloquent speech as a coded message to Dawid Malan, the world No.1 T20I batsman who still doesn’t quite fit into England’s tactical plan, taking a little too long to get set and, despite averaging more in the Powerplay than everyone other than Buttler, scores the slowest of England’s options.

Perhaps it was said for Malan’s benefit; but there’s wisdom here for Roy. In this England side, a good time doesn’t have to be a long time. Roy can safely try and attack his way through the flaws in his game, with the backing of his captain.

As a result, Roy’s reverse sweep is key. His record with the stroke, against spin, is very good; from 62 shots, he’s scored 130 runs, and dismissed just twice. It’s the most ostentatiously attacking shot in the game, and Roy nails it. 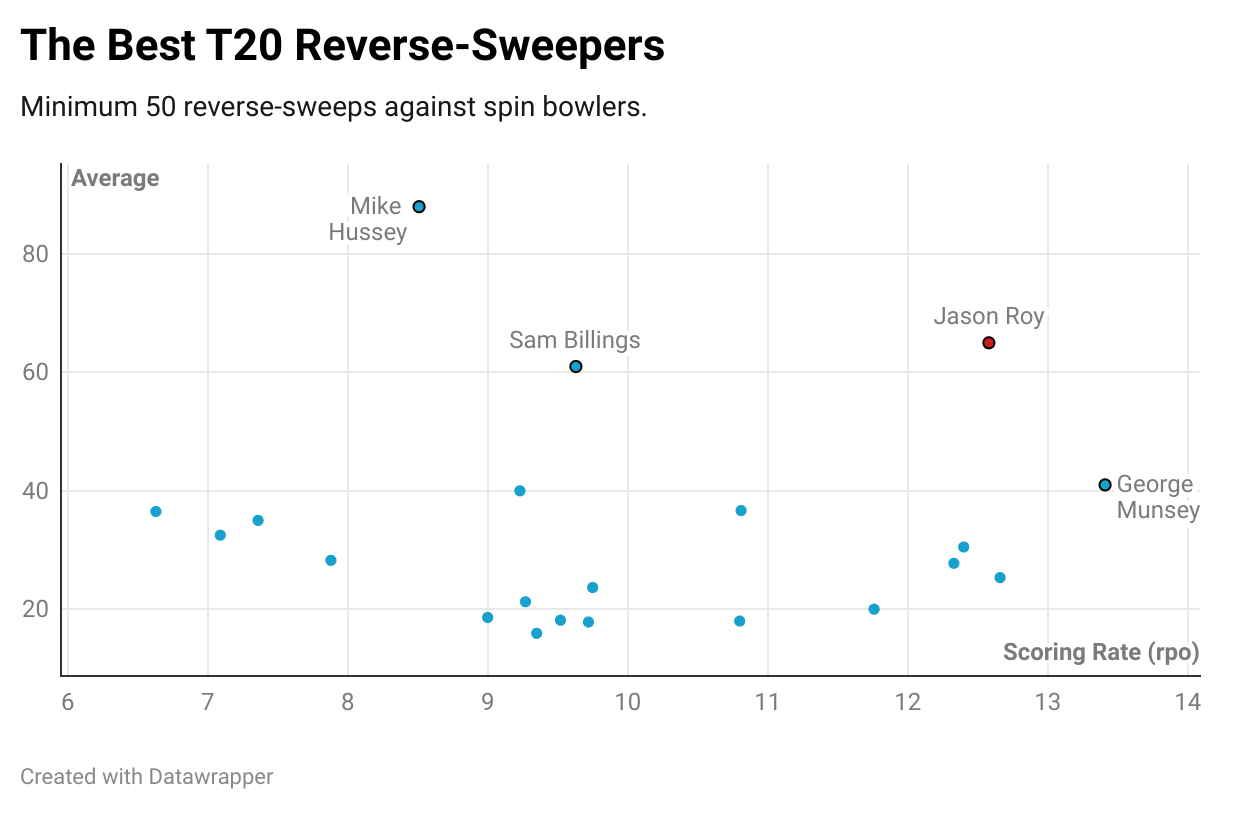 This isn’t to oversimplify the art of this shot. Selecting the right moment to play it – the right bowler, the right ball, the right field-setting, the right match situation – is as important for success with the stroke as the execution. But given Roy’s overall record against the bowlers taking the ball away from him is not strong, and this unconventional stroke is one which has brought him success, the appeal is obvious.

Given his role in the side, it would be better for Roy to be dismissed playing this stroke, taking the aggressive option early, than simply scrapping to survive. What’s more, the effect of beating backward point, the field changes which may follow it, may even make that survival easier.

It’s ironic in some ways, that the lack of versatility which makes Roy a unique case in this England group, could also be what could keep him in the side. His role is clearer than any other in the team. Focusing on that role and nailing the specific task he’s been given, at the expense of traditional statistics, is his route to security in the side, and to England reaching their full potential as one of the best T20 batting orders in history.