CricViz analyst Freddie Wilde predicts how things would pan out if Pakistan players are allowed to participate in the Indian Premier League.

It is one of the great shames of modern cricket that Pakistani players do not play in the Indian Premier League. The IPL is the world’s leading T20 competition in terms of economic clout and the quality of cricket; however, it would be better off, on and off the pitch, if Pakistani players were permitted to play. But what if they were? Which players would get contracts and where would they end up? CricViz Analyst Freddie Wilde evaluates how things might play out, running his eyes over the possible signings.

At IPL auctions the most in-demand overseas players are often the fast bowlers. This is because India traditionally has a high supply of batsmen and spinners but a lower supply of quicks and has looked to the overseas market for support. In this basic regard Pakistan, the nation blessed with more fast bowling talent than perhaps any other, would contribute a huge amount to any IPL auction and the gold rush for Pakistani quicks would be a defining feature of auction day. 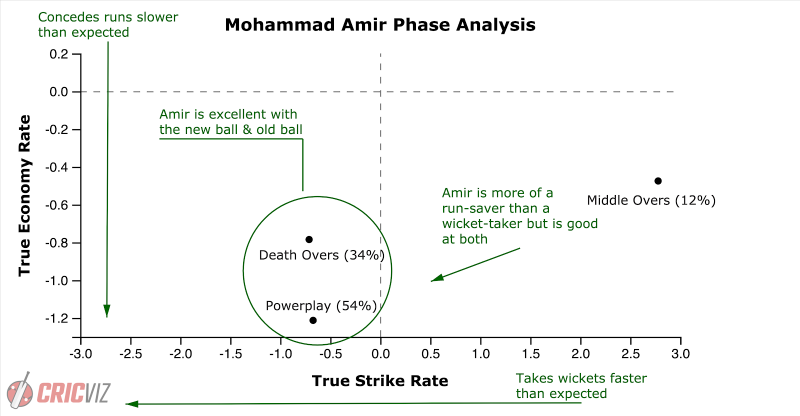 The Pakstani most likely to win an IPL contract would be Mohammad Amir. The leader of Pakistani’s white-ball attacks, Amir has been one of the world’s best T20 pace bowlers for a number of years now. Capable of swinging the new ball and nailing yorkers with the old ball, Amir is a classic top and tail bowler. Mumbai Indians, who have historically shown a clear preference for left-arm overseas quicks (Mitchell McClenaghan, Jason Berhrendorff and Trent Boult), would likely be in the market for Amir, who could form an astonishing triumvirate with Jasprit Bumrah and Lasith Malinga. That said, Amir would be an asset to any of the eight teams. 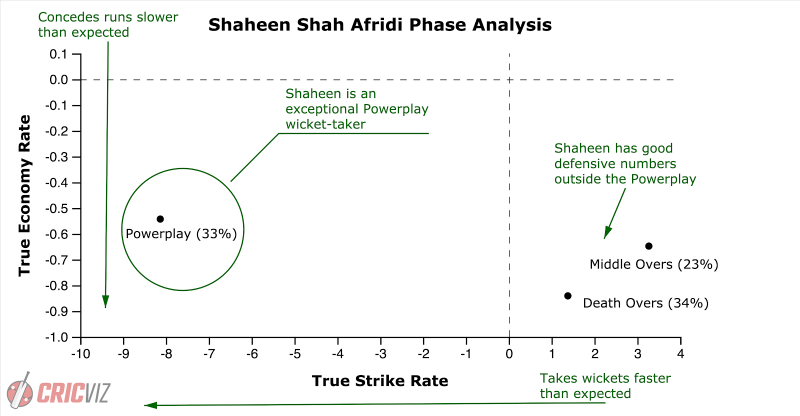 Amir’s left-arm top and tail apprentice is the young star Shaheen Shah Afridi. Across his short career so far, Shaheen has returned very similar figures to Amir. Generally Shaheen has been a slightly more effective wicket-taker while Amir has been a superior run-saver. Both players would almost certainly get picked up, with teams missing out on one sure to pursue the other. Both players would fetch huge sums of money but Shaheen’s age – he is not yet 20, while Amir is 27 – might see him fetch top dollar. The more established and proven Amir would be the safer bet: his floor is higher; but Shaheen could be phenomenal: his ceiling is higher. 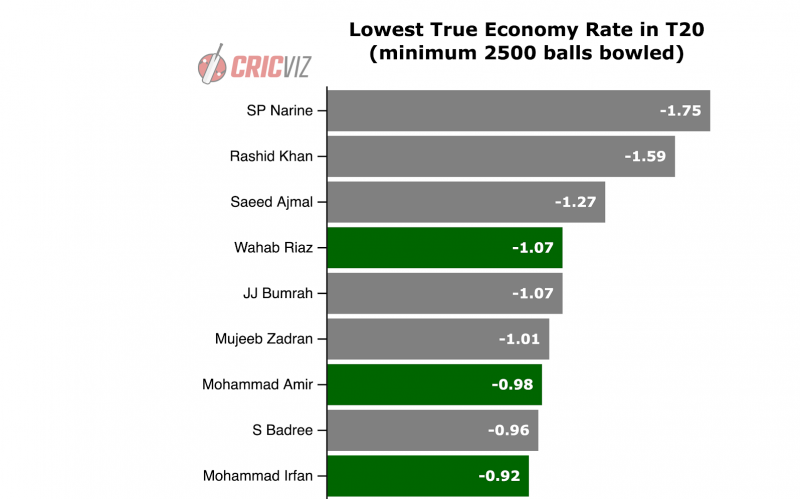 Wahab does not get the recognition he deserves. Unlike Amir and Shaheen who are classic top and tailers, Wahab is a more one-dimensional bowler who should be deployed almost exclusively in the death overs. Indeed Wahab is one of the best defensive quicks in T20 history. His career statistics are boosted due to him playing a large proportion of his matches in the UAE but a career True Economy Rate of -1.07, level with Bumrah, is remarkable. Wahab would be one of the most in-demand death bowlers in the auction. It would be fascinating to see him at RCB where the Chinnaswamy Stadium would pose a serious challenge to his defensive skills. Kings XI Punjab and Mohali would be another potential destination. Wahab is also a useful lower-order hitter. 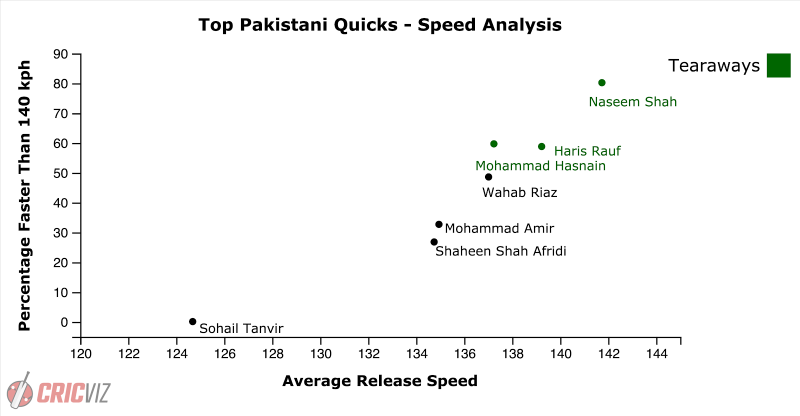 After the big three of Amir, Shaheen and Wahab, there is a group of three rawer and less proven quicks: Naseem Shah, Mohammad Hasnain and Haris Rauf, who might not be so widely pursued or fetch quite as much money, but would be likely to attract significant interest. All three bowlers are blessed with raw pace – such a valuable asset and something that is often hard to come by in India. Rauf is more of a middle and death overs enforcer while Naseem and Hasnain are likely to evolve into classic top and tailers. KKR, who have shown an affinity for raw overseas quicks in recent years (Anrich Nortje and Lockie Ferguson), would probably be sniffing around these three. 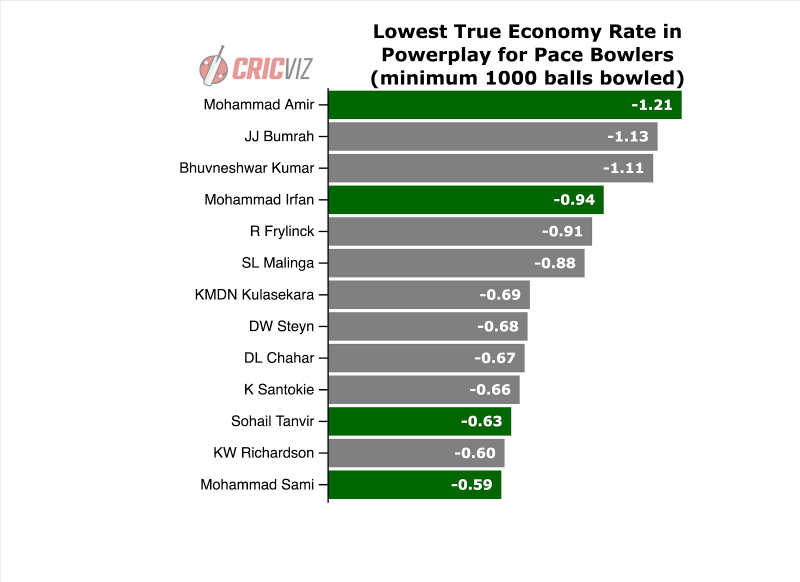 At the other end of their careers to the raw pace trio of Naseem and co. are Sohail Tanvir and Mohammad Irfan. Tanvir played in the IPL way back in 2008, finishing as the leading wicket-taker and taking Rajasthan Royals to the title. Both players are the wrong side of 35 but are exceptionally reliable performers in the T20 format. Irfan is a powerplay specialist—focussed primarily on run-saving, while Tanvir is a bit more of a wicket-taker and can also operate at the death. Both would be cheaper pick-ups than the other Pakistani quicks, but are more one-dimensional and with less ball-speed might be found out on flatter Indian pitches. Their age would also count against them. Ultimately they are likely to go unsold but would be a good Moneyball pick for teams looking for ultra-specific roles or cheap pick-ups.

Since the retirement of Saeed Ajmal, Pakistan have not produced a specialist spin bowler who would be able to win an IPL contract. However, IPL teams have historically shown interest in overseas spinning all-rounders — the likes of Shakib Al Hasan, Mohammad Nabi, Mitchell Santner and Chris Green — and this is where Imad Wasim, Shadab Khan and Shahid Afridi would come into play. Taken as an all-round package, all three players would be good pick-ups at the right side, probably teams with spin-orientated home conditions. 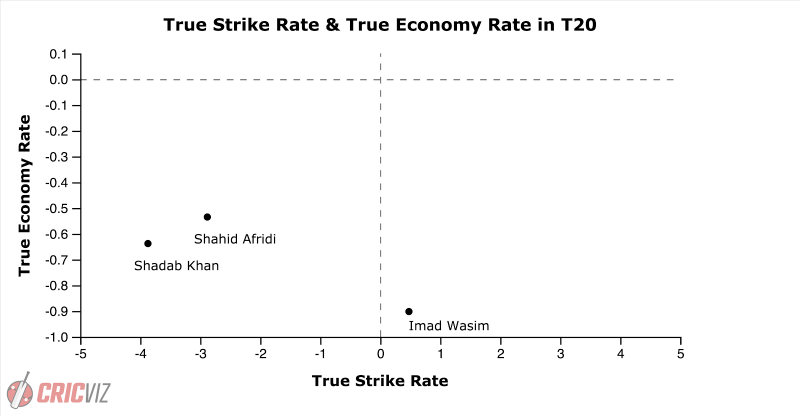 Imad’s powerplay bowling is supreme and as a left-armer, taking the ball away from the right-hander, he creates favourable match-ups. His improving batting also offers value and his left-handedness would be useful. It’s easy to imagine Imad at SRH or CSK.

Shadab is the least proven of the trio but has the most potential: both as a bowler and a batsman. His leg-spin isn’t reliable yet but his evolution as a batsman in the most recent PSL makes up for that. Shadab would be a good fit at KKR, who have history with fluid batting orders and have a relationship with him from TKR.

At (at least!) 40 years of age, it is unlikely that many teams would be interested in Shahid Afridi, except perhaps CSK for whom age has been largely irrelevant in recent years. Afridi is in many respects the prototypical T20 cricketer and he still offers immense value with the ball and is a perfect batsman for the death overs or to be deployed as a pinch-hitter. Seeing him and Dhoni in CSK yellow would be a sight to behold and it would be fascinating to see how Dhoni’s lightning glovework coped with Afridi’s rapid speeds. 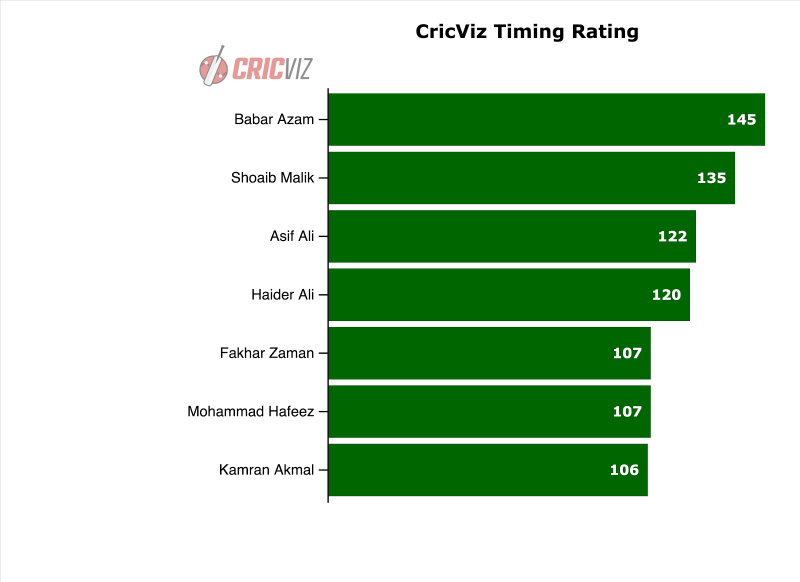 The most heralded Pakistani batsman is Babar Azam and it would be fascinating to see whether he would attract the interest of IPL teams. While he is widely celebrated, Babar is arguably slightly overrated in the T20 format: he is an elite wicket protector but his scoring rate is poor, particularly once the field drops back. The fact that Steve Smith and Kane Williamson have proven popular in recent auctions suggests that there is a market for overseas anchor batsman and as an Asian player Babar is at least an excellent player of spin. However, the way Joe Root has been overlooked in previous auctions suggests the demand for such players is fragile. It’s possible to imagine Babar at CSK, who have shown a preference for anchor style overseas batsmen in recent years with Faf du Plessis and Shane Watson. Babar’s strong spin game would suit conditions in Chepauk. 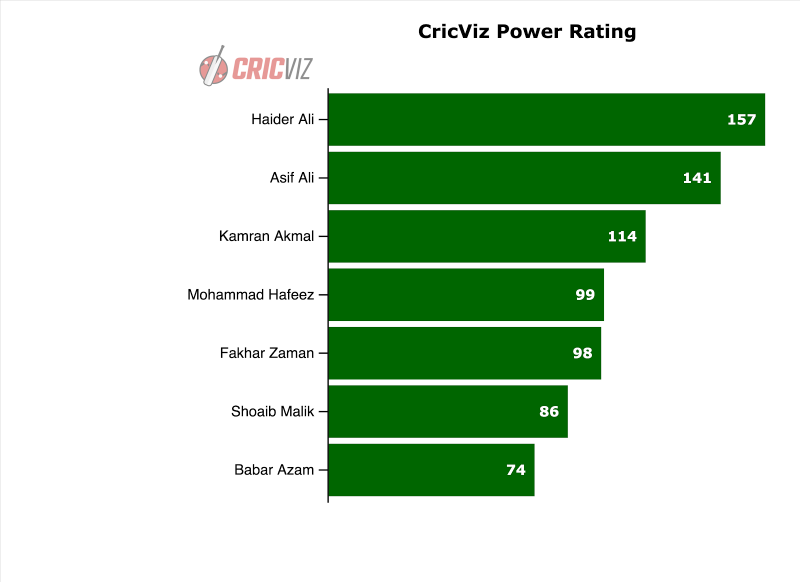 While Babar attracts most of the attention, the more explosive trio of Fakhar Zaman, Haider Ali and Asif Ali might be better pick-ups and are more likely to be sold on the cheap. Fakhar and Asif have been inconsistent in recent years but they bring genuine power and given players such as Martin Guptill and Mitchell Marsh have won IPL contracts in the past, it is not impossible to see Fakhar and Asif attracting some interest. Both players would enjoy conditions in Mumbai and Bangalore. Having only just burst onto the scene in this year’s PSL, it would almost certainly be too soon for Haider, but the pick-up of Tom Banton this year shows IPL teams can be swayed by strong recent form and Haider’s raw materials: big power and a strong spin game, make him well-suited to the middle overs.

The veteran pairing of Shoaib Malik and Mohammad Hafeez are utility cricketers and if a team was after an experienced middle order fulcrum who could bowl some useful overs they would be decent candidates. However, they are unlikely to be in high-demand and would probably only attract one or two bids. Malik at Chennai or maybe Rajasthan Royals, replicating the role he fulfilled for Guyana Amazon Warriors, is not impossible to envisage. Kamran Akmal would be unlikely to attract attention but his Powerplay exploits are underrated and he is an excellent player of spin. However, his wicket-keeping is poor and the high supply of Indian keepers make it a less important skill anyway. He’s a good batsman but there are better and younger overseas options out there.

The chance of Pakistani players being allowed to play in the IPL any time soon remains very unlikely. However, what this exercise has demonstrated is that certainly three or four, most probably half a dozen and quite possibly even more, Pakistani players would be sold at the auction if they were allowed to enter. Ultimately this would make IPL teams stronger, the quality of cricket higher and the league even greater. Cricket has historically been a great unifier between two divided nations: opening the IPL’s borders to Pakistani players would be a momentous moment and cricket – on and off the pitch – would be better for it.