The decision not to select Alex Hales for any England squad this summer is a strong stance by the ECB, who have acted swiftly once the news of Hales’ drug-test failure became public. The merits of the decision will be discussed widely elsewhere, but away from the puritanical fury the cricketing implications are enormous.

Hales is one of the finest English white-ball batsmen ever, and replacing him is a considerable challenge. The question on everyone’s lips shouldn’t be was Hales’ treatment fair – it should be who replaces him in the World Cup squad.

BREAKING: Alex Hales has been removed from England’s #CWC19 squad, and their squads to face Ireland and Pakistanhttps://t.co/yw2ZLlcbQ8

Joe Denly’s place as reserve batsman is not under threat, you would imagine – but little discussion around his position in the squad has suggested he’s an ideal starter. His versatility is an asset in the squad as an option from the bench, but he is unlikely to receive a promotion into the ‘best XI’. The obvious next man in was assumed to be Sam Billings, but a cruelly timed shoulder-injury has him ruled out for the season. In his absence, there are five other probable candidates.

Sometimes, style is matched with substance. James Vince has been the stylist in county cricket for years, and while he has a somewhat chequered history with international cricket, he has consistently turned out magnificent List A numbers. His 1,392 runs at 69.60 over the last three years is serious, prolonged form, and the fact they’ve been made at 6.73rpo is the cherry on the cake.

Captaining Hampshire to the title last season further underlines his credentials as a senior professional capable of working in pressurised environments. 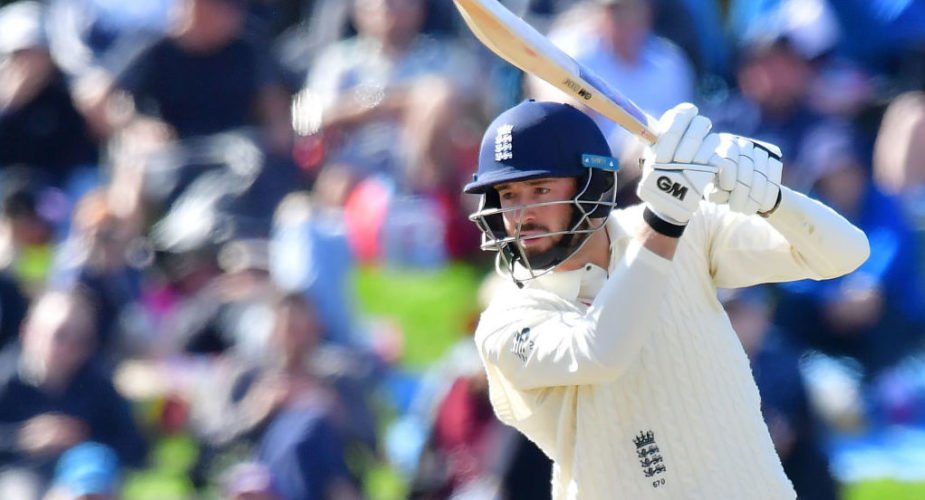 Has James Vince earned another crack at international cricket?

Equally, as one would expect from Vince, his timing has been immaculate. Last week he scored 190 (154), the highest domestic score by an English batsman in more than a decade, emphasising the point that he is an underexposed talent in ODI cricket.

Critics who worry about his record against the swinging ball in Test cricket can put those concerns aside in this format; in those last three seasons, he’s averaged 75.75 against seam bowling, scoring at more than a run-a-ball. England haven’t yet managed to get the best out of Vince, but a decent run against less than excellent attacks (something he’s never been afforded in international cricket) could be the run he needs to acclimatise to the top-level.

“Although I am a generally sympathetic person and compassionate observer, on Alex Hales’ case, if what we read is true, then I am broadly unsympathetic because of the context of the situation.”https://t.co/sII5mCYKDd

Group games against the lower ranked ODI sides could be the way in that he needs, the gentle introduction that a talent like Vince deserves. He is, across the board, the obvious choice.

When Ben Foakes was promoted to the Test team, he already felt like an established international cricketer. Sophisticated, controlled, photogenic: he was everything we expect of a top-level athlete, and still looks set to involved in the Ashes contest this summer. 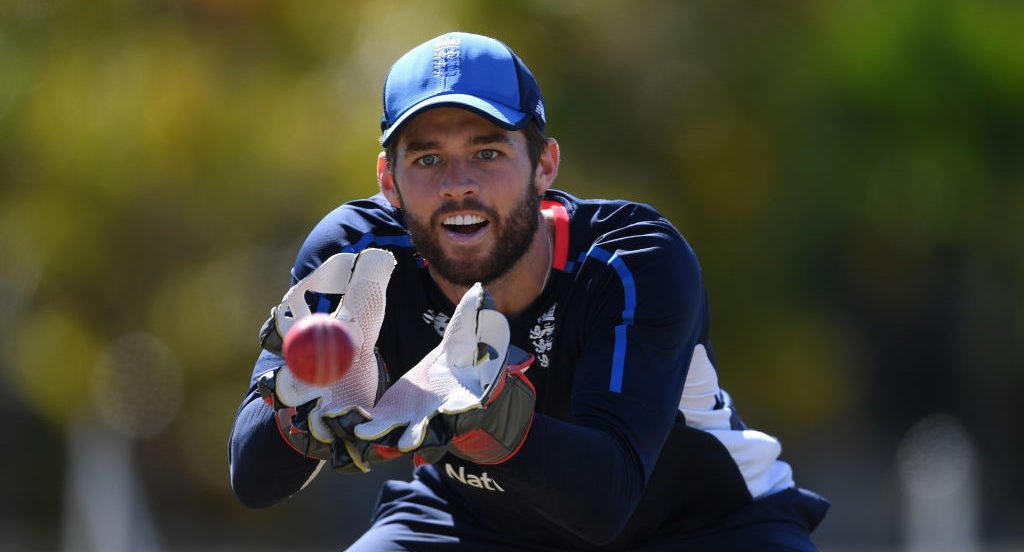 Foakes is an exceptional stumper, but what about his white-ball batting credentials?

Instilled as the replacement in England’s squad last week for the injured Sam Billings, Foakes is clearly the next wicketkeeper in line, if not the next pure batsman, but he has a very good case to be in the discussion for the latter. An average of 68.26 in the last three Royal London One-Day Cup seasons shows that he is more than just a tidy gloveman, and can hold his own with the bat.

What’s more, he has the highest Contact Average (a measure that weights middled shots higher than edges, in essence) in the last three seasons of the One-Day Cup, and his Timing Rating of 212 is also top of the pile. By a range of measures, he’s the obvious choice. The additional benefit of his inclusion is obviously that he could – and arguably should – keep wicket, freeing up Bairstow and Buttler to focus on their batting. 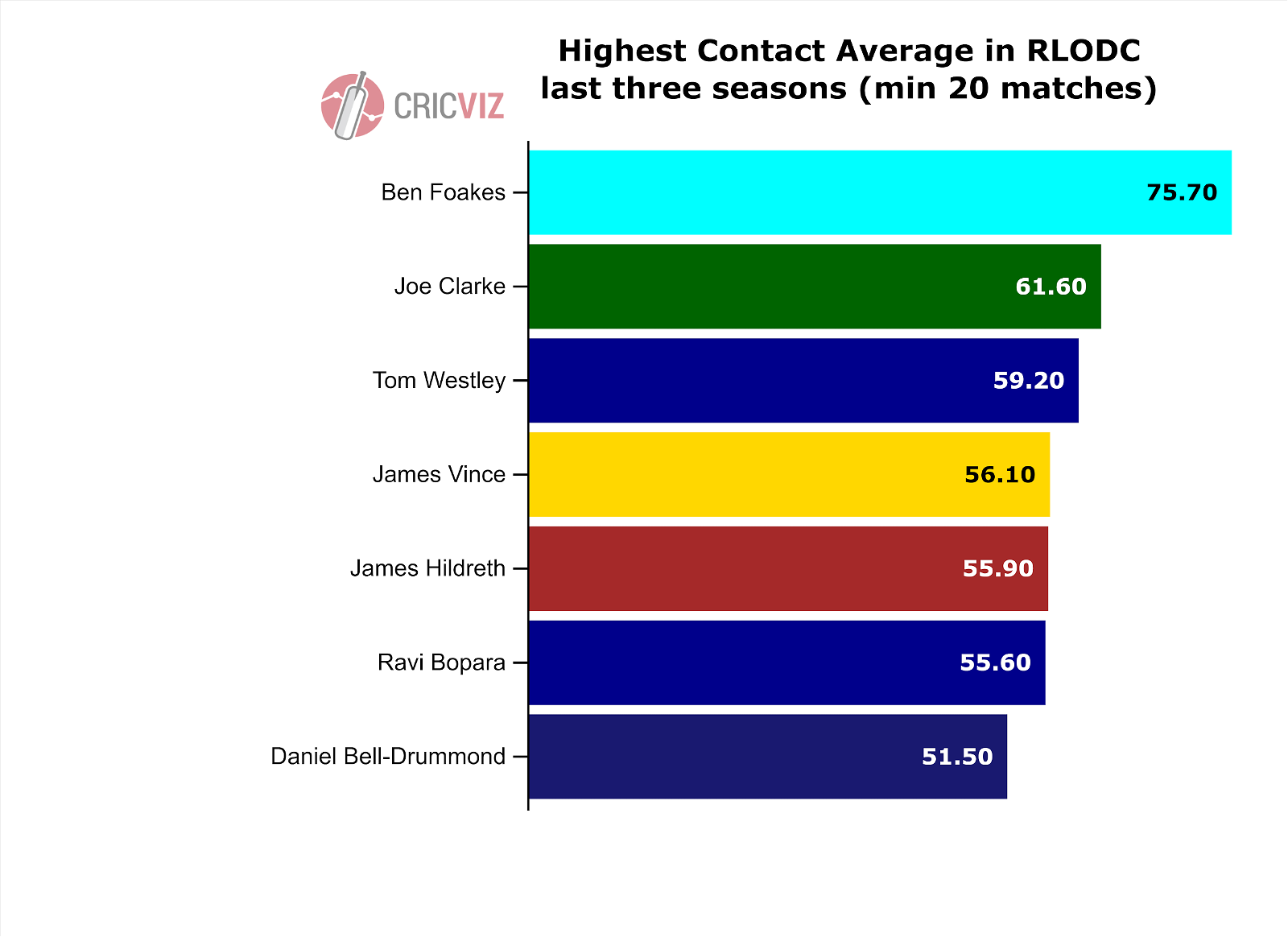 Against him is his the rate at which he scores. ‘Just’ 5.58rpo over the last three years, England may well feel that his cultured but more conservative approach to white-ball batting is just too much of a departure from Hales’ shock-and-awe. His Power Rating in the last three seasons is just 52 – the lowest of anyone to play 20 matches in the One-Day Cup. Top of the Timing Rankings, bottom of Power, neither ranking is inherently more important than the other, but that perhaps isn’t the profile of a man replacing Hales.

If you exclusively follow international cricket, you might not be familiar with Sam Hain. A consistent accumulator in the middle overs, the 23-year-old Warwickshire batsman is not the archetypal candidate for a World Cup bandwagon. However, Hain’s List A numbers are off the chart. His century on Sunday against Worcestershire lifted his career average to 58.52, nudging himself above a certain Virat Kohli and further underlining that he is a numerical juggernaut. Ten List A centuries to his name before his 24th birthday is a remarkable return – one that only 15 other men in history can match. 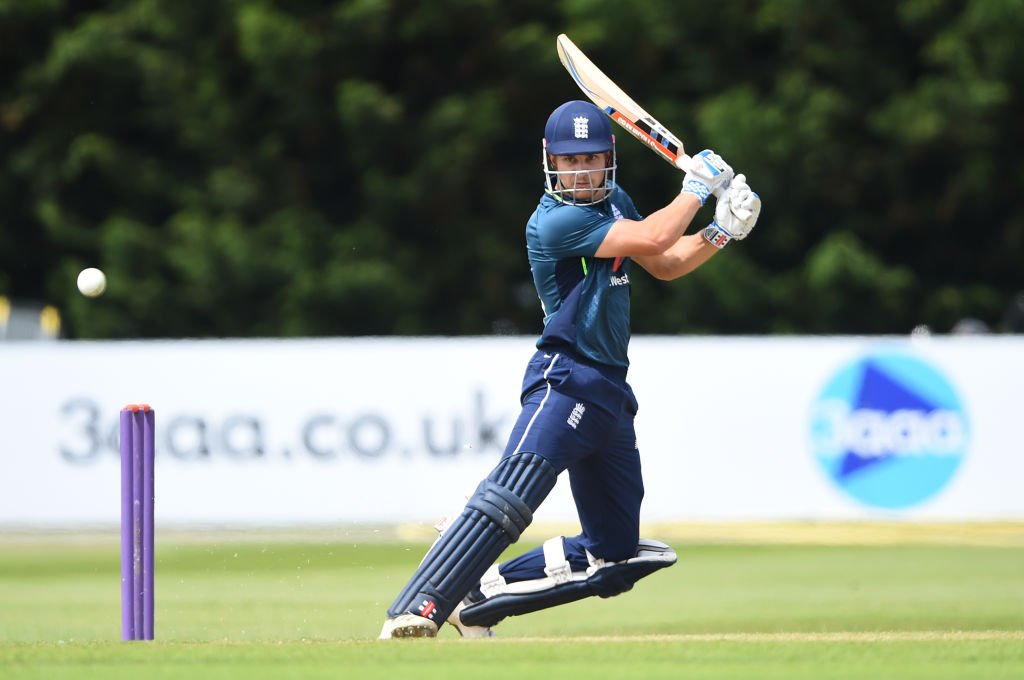 In terms of style, Hain is more classical than many in the current England team. With his low Power Rating of 57, but his high Timing Rating of 146, Hain is a more obvious replacement for Joe Root than Hales. However, when somebody is churning out that many runs at that good an average, you take them seriously.

What a day @WarwickshireCCC‘s Sam Hain is having!

First with the bat he cracks 161* off 141 balls, finishing with a List A average of 58.52, a world record, and then in the field he pulls off this Jonty Rhodes-esque run out!

Yet whilst Hain’s record has been of note to those following English domestic cricket, he is yet to receive international honours outside of England Lions duty – a testament to the depth in England’s white-ball batting, but a blot against his name. As such, this may be seen as too much too soon for the Warwickshire man, who will almost certainly be a key part of the next World Cup cycle. 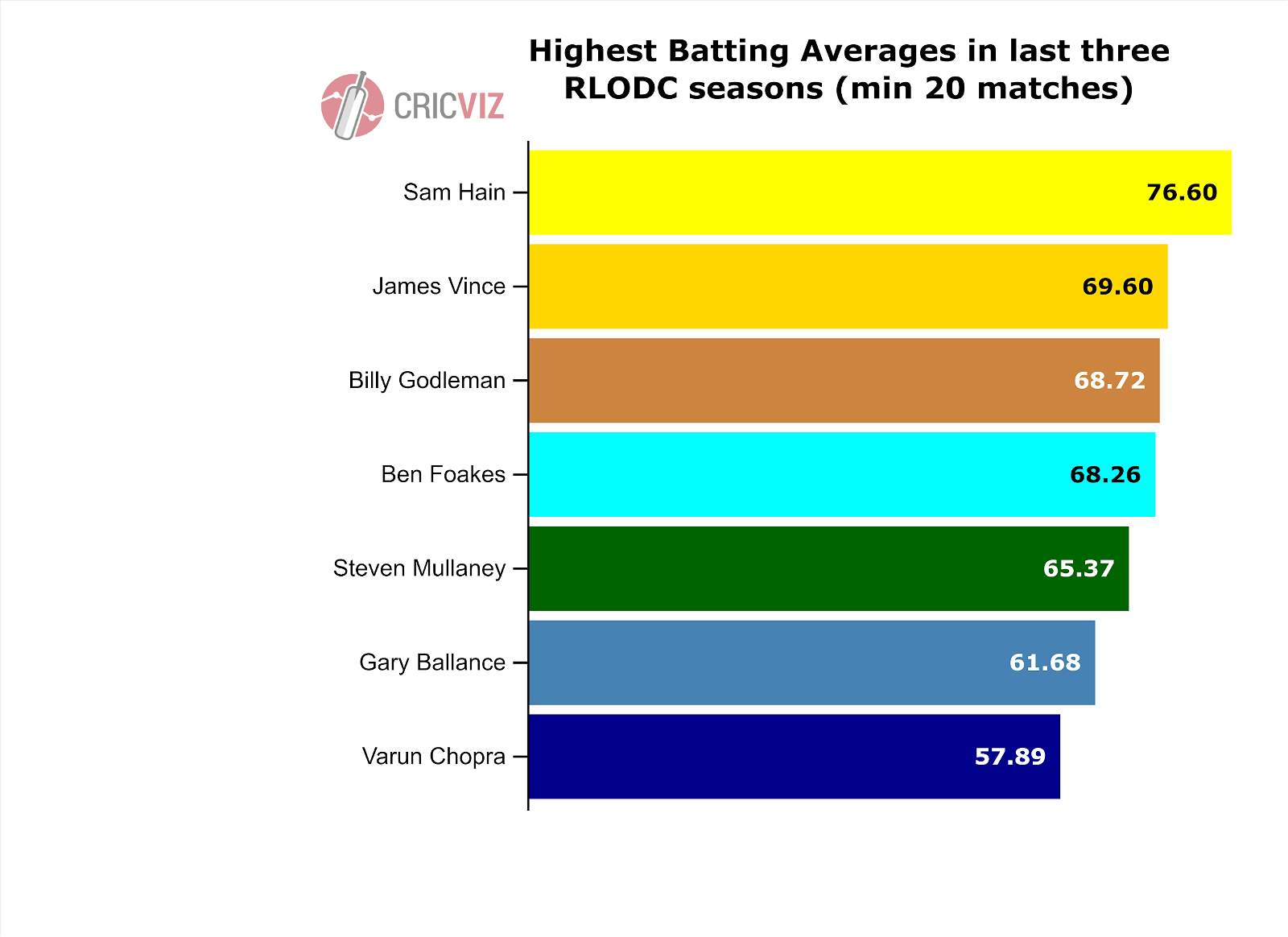 More generally, Joe Clarke is regarded as a future Test batsman, but the new Nottinghamshire recruit is a serious white-ball performer. Part of the Worcestershire side to win the Blast in 2018, Clarke is capable of going through the gears when necessary, but he does bring that red-ball pedigree into his List A batting, with his Contact Average of a very healthy 61.60 over the past three seasons bettered only by Ben Foakes among established domestic stars.

Clarke has started this season in excellent nick, and looks to have benefited from his move up to Trent Bridge – a step up at the right time.

Specifically, what will really have England’s coaches interested in Clarke is his excellence against spin – because that’s what they’ll lose in Hales’ absence. Since the World Cup, Hales averages 67.2 against spin in ODIs (compared to 35.38 against pace), and scores at faster than a run-a-ball against it. Whilst Jason Roy batters the seamers, Hales batters the spinners.

“Our style has evolved over the last number of years, from extremely aggressive to positive, aggressive, smart cricket.”https://t.co/RZtfnNtlWX

Similarly, in the last three years of the One-Day Cup, Clarke has been dismissed by spinners only three times, averaging 79.33 against them. Pitches in the World Cup are likely to start out flat and get more spin-friendly as the game goes on, and England will need to negate quality spinners to avoid a re-run of the Champions Trophy 2017.

Subsequently, Clarke’s strength against spin becomes a valuable asset if England wanted to maintain the balance of the side in this respect.

Long-levers. Brutal through the leg side. Reputation as slightly fiery. Lancashire’s Liam Livingstone is arguably the clearest like-for-like replacement that England could pick for Hales. It’s a similarity which extends to their records as well; in domestic cricket, they score at almost identical rates through their trademark zone, in front of square on the leg side. Equally, Hales has a Power Rating of 132 in domestic cricket, whilst Livingstone’s is 133. If you want to replace the precise skillset of Hales, then Livingstone is ideal. 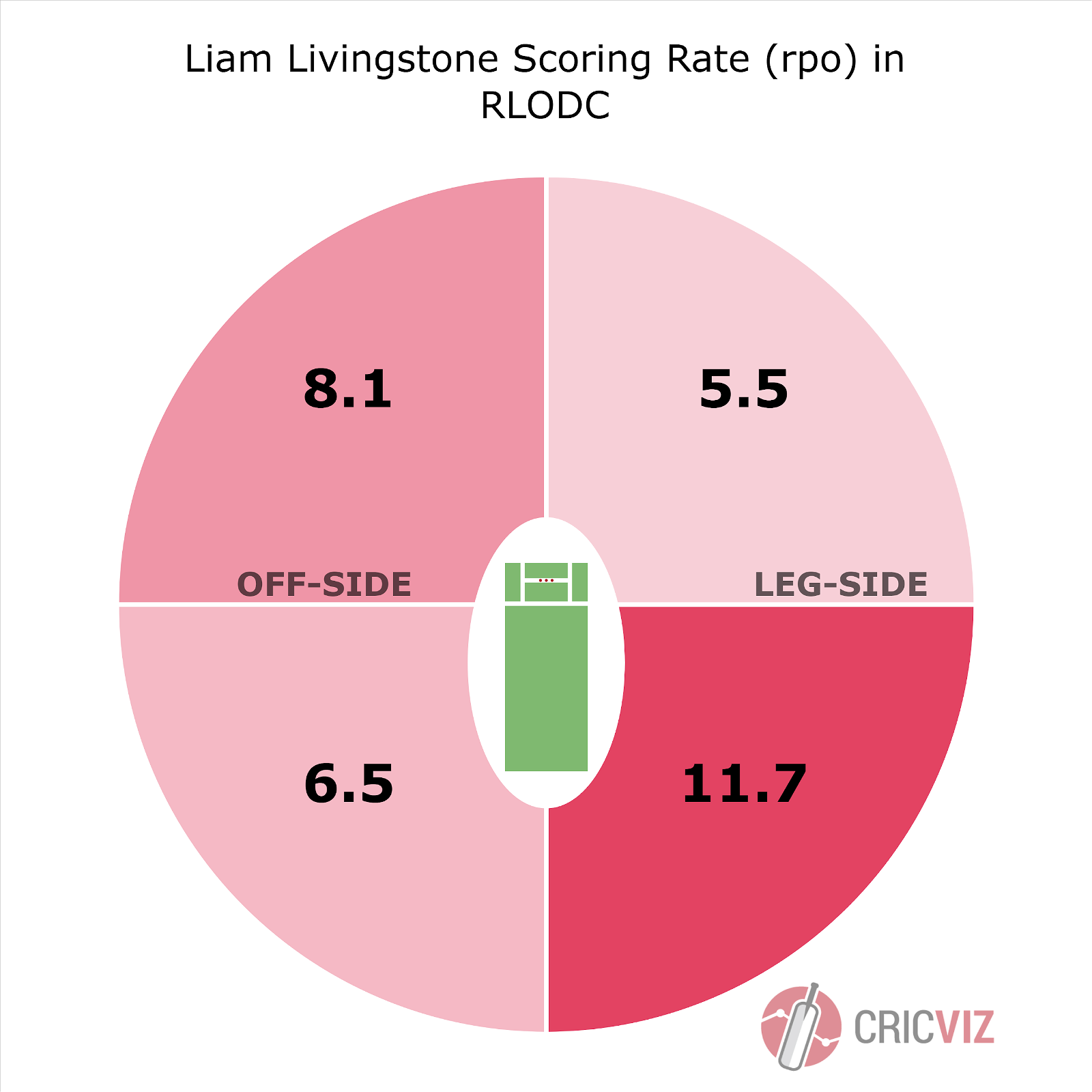 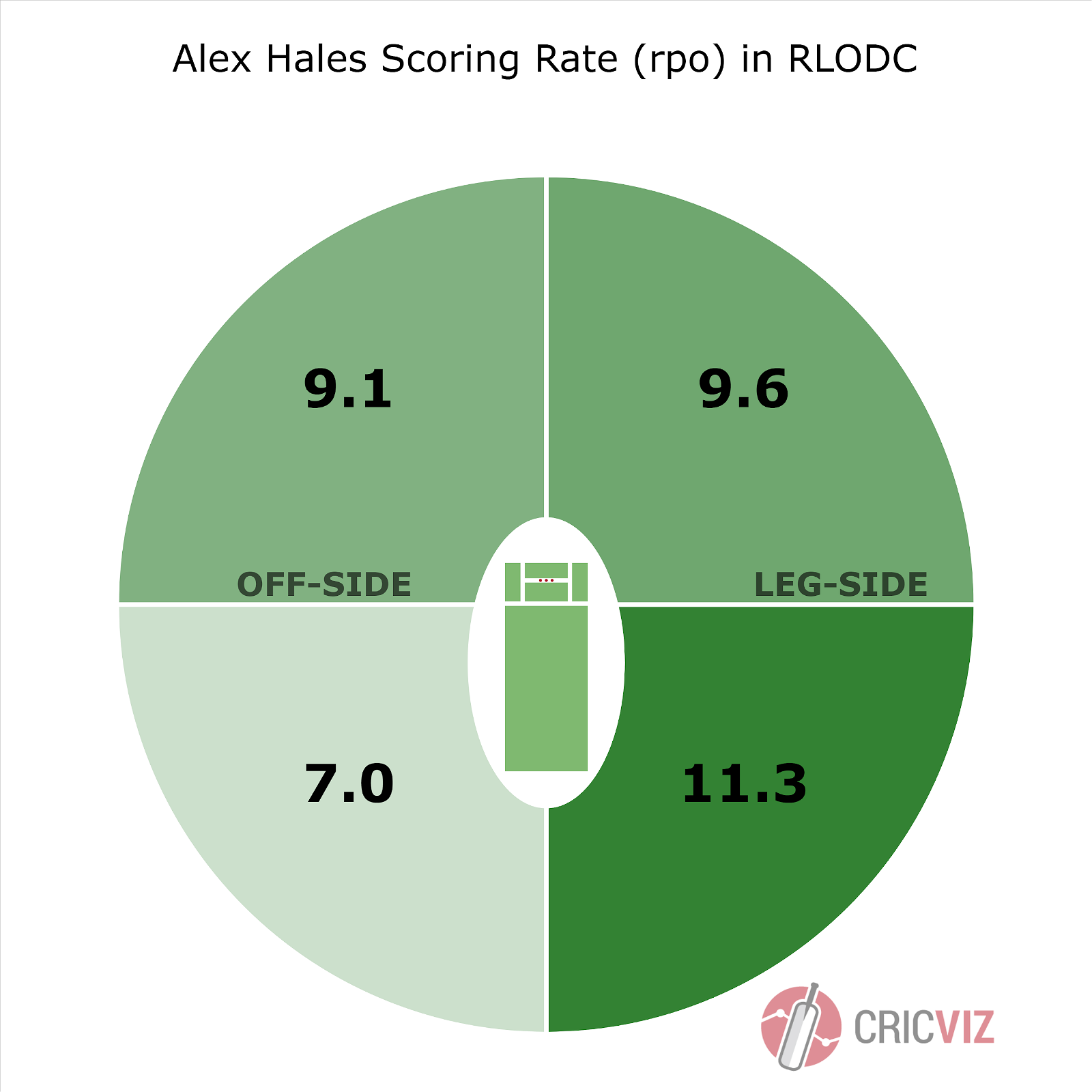 In terms of creating a prolonged body of work, Livingstone has less of a claim than others. His aggregate runs total over the last few years doesn’t really compare, but the rate at which he scores certainly does.

He is the most destructive hitter on this list – the one most capable of taking apart a World Cup attack – but he may lack the consistency to extend that destructiveness across an entire campaign. The broader England set-up clearly like him, given his selection in previous squads, and his recent appearances in the IPL will have given him experience of the high-pressure environment that comes with international cricket. 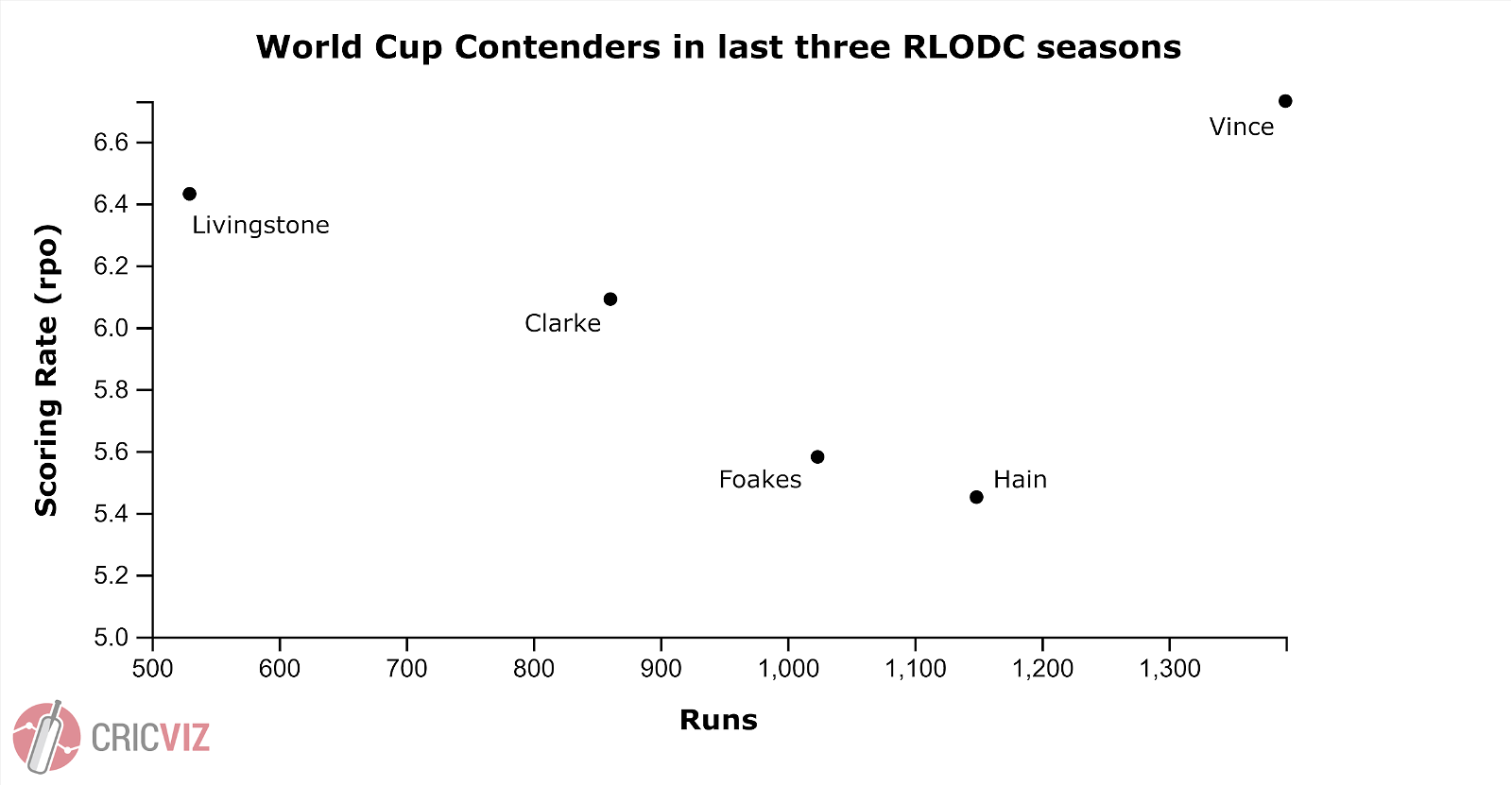 For an explanation of the Batting Ratings used in this analysis, click here (external link: CricViz)