CricViz analyst Freddie Wilde selects his PSL team of the season, abiding by the four overseas players per team and one emerging player per side rules.

Teams of the tournament are ultimately just a bit of fun. When they are selected by the media or, as is increasingly the case, by the governing bodies of leagues and tournaments who release ‘official’ teams, they are simply a collection of the best performing players in that tournament. They are a nice way of listing the players who have done well across the last five weeks.

However, at CricViz we believe that teams of the tournament can be a little more than that. As well as identifying the tournament’s best players they can be used to help us better understand the game and in particular the art of building a side.

Sure, you can start at the top with the openers and work your way down the batting order picking the best performing players in each spot one by one but in reality building a team doesn’t work like that. Ultimately the best teams are constructed not from one to eleven but with more thought, starting with those who demand selection and moving through the team accordingly, paying heed to the need for different skills in different phases of the innings. This should not be seen as taking the fun away from the process but adding to it and, hopefully, educating along the way as well.

Before we get started, a couple of ground rules: this remains a team of the tournament and as such any justification for picking a player must be based on their performance in the tournament in question. For the same reason, players must be picked to perform the role they performed in the tournament: if a player who normally opens the batting actually batted at number four in every innings he shouldn’t be selected as an opener, likewise if during the season a bowler bowled exclusively with the new ball he shouldn’t be entrusted to bowl elsewhere.

This team was selected using CricViz’s advanced Match Impact model. CricViz’s Match Impact is a performance evaluation tool for T20 cricket. Match Impact is based on advanced predictive models of T20 cricket that forecast an expected total after every ball, taking into account the current score, the host country and venue being played at. The model prescribes a positive or negative value after every ball – measured in runs – to the batsman, the bowler and where relevant, the fielder, according to whether their actions have increased or decreased the expected total. Match Impact is used by CricViz in drafts and auctions around the world.

The only player who stands out is Ben Dunk who was without a doubt the best batsman this season. Dunk’s average batting impact of +8.00 runs per match was easily the best in the league and was the product of him scoring quickly in low run environments – during the middle overs and after his Lahore team had lost early wickets and were struggling. Dunk also took the gloves for Lahore so can assume that role for this team which means we have already covered the important wicketkeeper position. 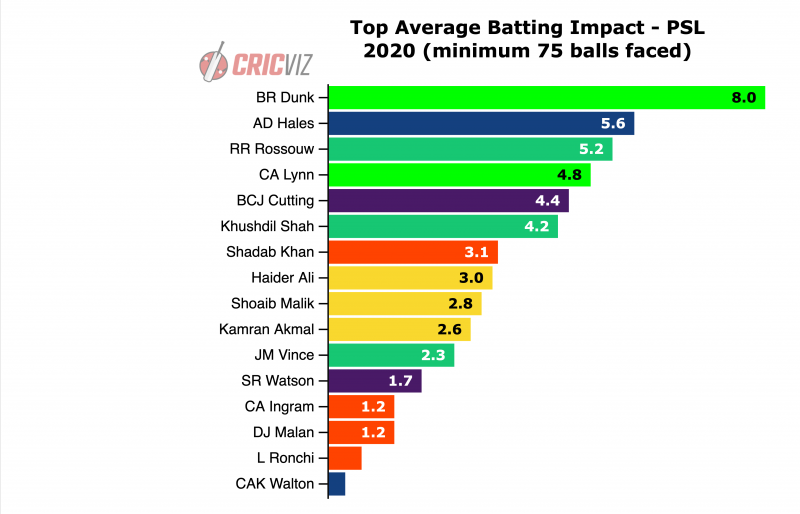 Given the pace bowling-heavy balance of domestic talent in the PSL it should come as little surprise that the most impactful Pakistani players this season were pace bowlers and the man leading the way was Naseem Shah, who becomes the second name on our team-sheet. Although Naseem only played six matches his average Bowling Impact of +11 runs per match is outstanding and is simply too good to ignore. Naseem only took five wickets but four of them came in the Powerplay when they are most valuable and he then proved to be very economical in the death overs when run rates are typically high. It is illustrative of the value of match impact as a measure that Mohammad Hasnain, who took 15 wickets, only has a bowling impact of +0.40 runs per match. 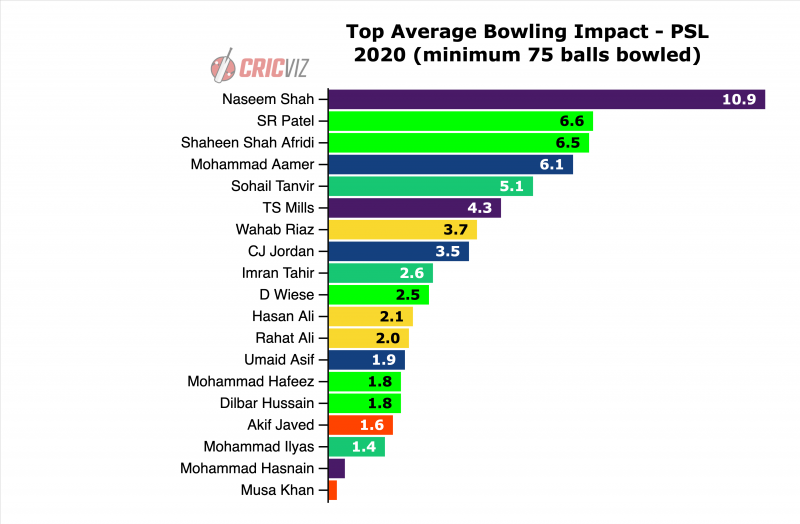 Naseem, Shaheen Shah Afridi and Mohammad Amir all fulfilled very similar roles this season: taking the new and old ball, and they all performed similarly well – all showing a slight Powerplay preference. With Naseem a guaranteed starter there is only one spot available for Shaheen or Amir or we’d be asking one of them to perform out of position by not taking the new ball and bowling through the middle overs. By virtue of a slightly superior impact Shaheen edges it. He is also a fractionally more attacking bowler with the new ball than Amir whose Powerplay impact comes from run-saving more than wicket-taking and we are building an aggressive team who look for wickets up front.

With Naseem and Shaheen preferring the new ball, Wahab Riaz edges out Sohail Tanvir for the specialist death bowling spot. Wahab was the leading death overs bowler this season and completes our pace bowling attack. He can take one over through the middle phase before bowling three in the closing overs, making the most of his extreme speciality skill of bowling at the death and enabling us to bowl three overs of Naseem or Shaheen with the new ball. His useful hitting means he can slot in at number eight in the order. 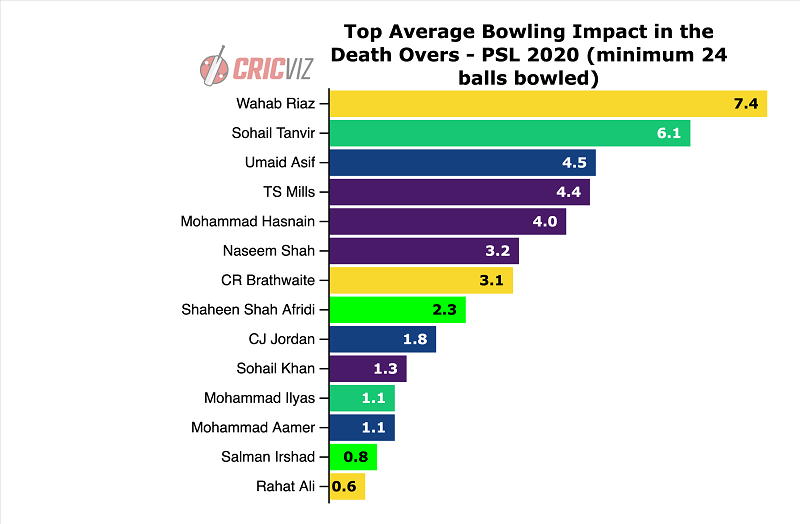 The leading domestic batsman this season was the middle order left-hander Khushdil Shah. His batting impact of +4.2 was comfortably the highest among domestic players to have faced at least 75 balls. Khushdil batted at number six for Multan Sultans and played two superb innings for the table-toppers, displaying impressive power-hitting capabilities.

The next best domestic batsman was Islamabad United’s captain Shadab Khan whose promotion from lower order to middle order proved to be a revelation. The most impressive aspect of Shadab’s batting was his intent: typically when batsmen play through the middle overs they can be guilty of too much consolidation but he batted with refreshing freedom. While Shadab’s leg spin should not be relied on – his bowling impact across the season was fractionally negative – he offers the side another bowling option to be used in favourable conditions or for match-ups. Shadab is also an excellent fielder and can captain this team.

Just behind Shadab was Peshawar Zalmi’s Haider Ali. This was a breakthrough season for the 19-year-old right-hander who is eligible as our Emerging Player. Batting largely at number three, Haider was a revelation with his long levers and stride earning comparisons with Kevin Pietersen. Haider was destructive against pace and spin and is very well-suited to the number three role which requires coming in during the Powerplay or through the middle overs. 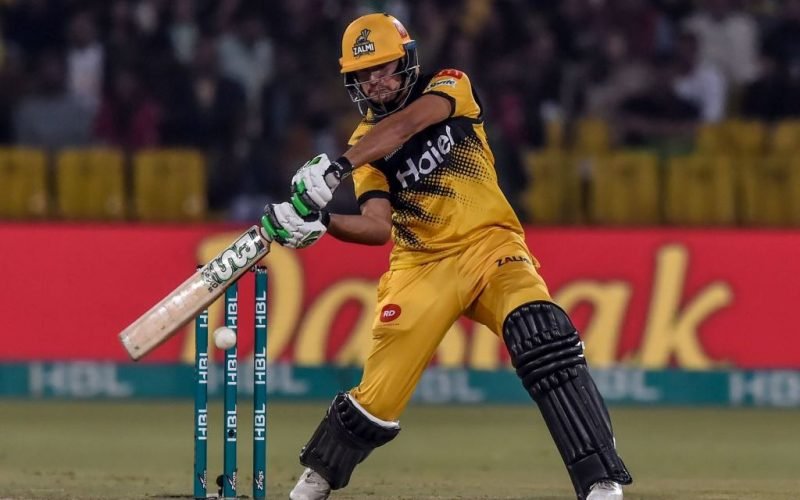 Haider Ali makes this PSL team of thee season having scored 239 runs from nine innings while striking at 158.27

Number seven is perhaps the most illustrative position in a T20 team regarding a side’s balance. If it is a batting all-rounder it typically means the team is batting-heavy and if it is a bowling all rounder it typically means the team is bowling-heavy. Bowling is a weak-link discipline, meaning that a bowling attack is only as strong as its weakest member. It is a priority of ours therefore, to ensure that this team has five strong bowling options.

Ben Cutting was an option for this spot, lending lower-order power to the batting, but we did not want to rely on Shadab and Cutting for four overs and jeopardise our bowling attack. Shahid Afridi was also an option but he only played five matches and his bowling was not good enough to justify treating him as a frontline bowler. Instead we have gone for the left-arm spinner Samit Patel.

Samit had a superb season with the ball finishing with a bowling impact of +6.6. As the league’s leading spin bowler he also gives our team its first genuine spin option. Samit was particularly valuable through the Powerplay where in this team he can operate alongside Shaheen and Naseem, before plugging away in the middle overs. Samit’s batting only had a neutral impact but with powerful players above him and Wahab’s hitting below him we should not need to rely on him too heavily.

With this team beginning to take shape the most glaring hole is the opening pair with neither spot filled. There are no clear standout Pakistani players for this spot so at least one must go to an overseas player. The two leading options are Chris Lynn and Alex Hales. However, Hales did not once open the batting for Karachi while Lynn did for Lahore in six of his eight innings. Hales’ Powerplay Impact of +8.6 was higher than Lynn’s of +4.8 but coming in at three and opening are quite different challenges: the first two overs in particular are very different when the swing and seam available are significantly greater than after that point. Additionally, although Hales was brilliant, he only played five innings, while Lynn played eight. Lynn’s performances in the exact role he is being selected for gives him the edge.

What we do with the second opening spot is related to what we do with the final bowling spot. We could go with Lynn and Hales at the top of the order but that would force us to go with a domestic bowler at number eleven and given the make-up of our attack we need someone who can operate through the middle overs with Wahab and Samit and there are no clear options for this role.

The priority of this team is also to prioritise bowling. The alternative is to go with a Pakistani opener – of whom Kamran is the batting impact leader – and then go with Imran Tahir as the final bowler. Kamran’s supreme strength against spin makes him well-suited to partner Lynn who is particularly destructive against pace, complicating opposition Powerplay plans. Both batsmen are aggressive and fast starters which make them ideal to exploit the fielding restrictions. 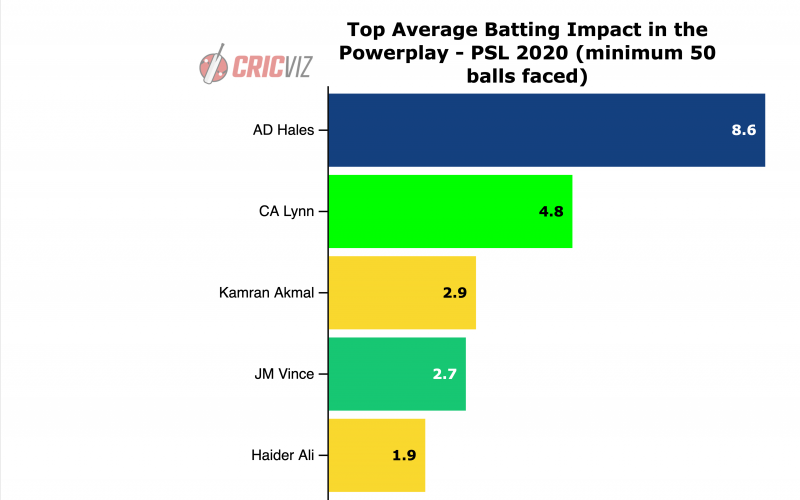 Spinners struggled in the PSL this season, largely due to the small boundaries. However, Samit and Tahir were two spinners who managed to thrive. During the middle overs no bowler to bowl at least 50 balls had a higher bowling impact than Tahir’s +4.8. Tahir’s selection completes our bowling attack and gives us a nice variety of bowling-types to call upon. Naseem’s right-arm raw pace, Shaheen’s left-arm swing, Wahab’s left-arm defensive skills, Samit’s left-arm spin and Tahir’s leg spin with Shadab a sixth option in spin-friendly conditions gives us the ability to play to match-ups effectively. The only missing bowler-type is off spin of whom the part-timer Mohammad Hafeez was the impact leader. 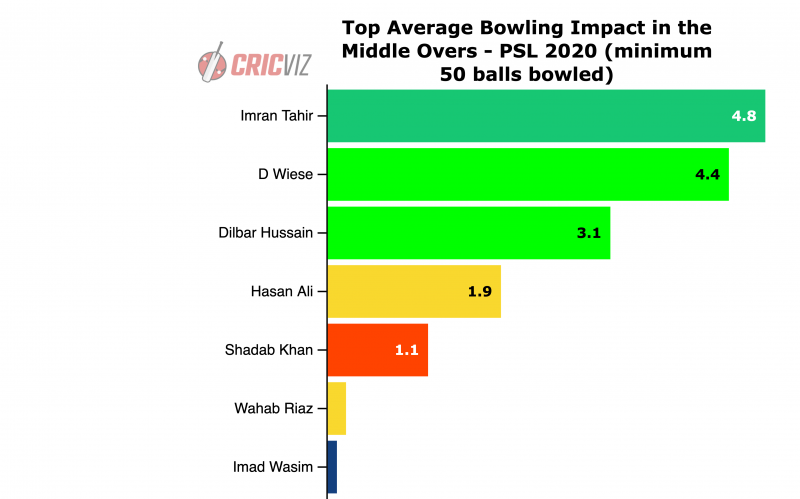