England are clearly a good T20I team and are likely to be among the favourites for the World Cup later this year in Australia. However, T20 is a capricious format and in the lead-up to the tournament the England management should leave no option unexplored in the search for the additional edge that could help them lift the trophy later this year. On the surface, England’s 2-1 series victory over South Africa in three hard-fought matches was a success for England, and there were plenty of positives for Chris Silverwood’s team. That said, getting better never stops and it is critical that England continue to look for areas to improve. Lessons can be learned, even from the most comprehensive of victories – and this series win, with both victories coming in the last over, was far from that.

After England rested a number of key players for the five-match series against New Zealand last November, the squad for this series was always going to reveal a whole lot more about their plans for the World Cup in October. Primarily there were three major takeaways regarding England’s thinking which prior to the series remained unclear:

1. Jos Buttler appears set to remain as opener and not bat in the middle order

3. The return of all-rounders Ben Stokes and Moeen Ali cost Sam Curran his place at No.7 and saw England hand that spare spot to an additional batsman

With only nine T20Is scheduled between now and the World Cup, it is unlikely that England will deviate significantly from the structure and set-up they utilised in this series. Whether that is wise remains to be seen.

Following Buttler’s hugely successful promotion up the order for Rajasthan Royals in the 2018 IPL, he had opened the batting in all of his T20I innings for England since. However, this only amounted to six matches and with England possessing a handful of alternative opening options – most notably Roy and his ODI partner Jonny Bairstow, who have had great success in the 50-over format – there was some speculation ahead of this series that England may slide Buttler back down into the middle and lower order where they have fewer options, and where he has batted in ODI cricket.

At domestic level – where the talent pool is shallower – the former is generally preferable. However, at international level there is more scope to be efficient with resources. England have a plethora of top-order options but a relative scarcity of middle-order options. This would suggest England would be better suited to using Buttler in a floating role batting anywhere between three and seven, but when he strode out alongside Roy in the first T20I at East London, England’s thinking was revealed.

Jos Buttler as an opener in T20Is

There are pros and cons to both options and they were both clearly displayed in the series. The first T20I was the perfect example of why Buttler shouldn’t open: he got out early looking to maximise the field restrictions before Roy and Bairstow proved they could do so anyway before the struggles of England’s middle order exposed the need for Buttler in the toughest overs. However, the third T20I at Centurion was the perfect example of why Buttler should open: he made the most of the powerplay and was then set for the middle overs, cashing in against the spinners.

Opening with Buttler – a tactic that could be described as front-loading – is a totally understandable move. It’s the aggressive option and it’s not a surprise Eoin Morgan’s England have taken it. What it does do, however, is make England’s batting a little more top-heavy, which in turn places more pressure on England’s tactics and strategy in the middle order, because what they gain from Buttler up top they lose elsewhere.

In this regard the major positive from the T20 series in South Africa was the performance of England’s middle and lower order, particularly in the death overs. The primary argument for moving Buttler down the order was to cover for England’s apparent lack of explosiveness at the death. However, this series suggested these concerns were misplaced. In the death overs (16-20) Morgan scored 68 runs at 15.11 runs per over, Stokes scored 52 runs at 10.06 runs per over and Moeen scored 49 runs at 16.33 runs per over. 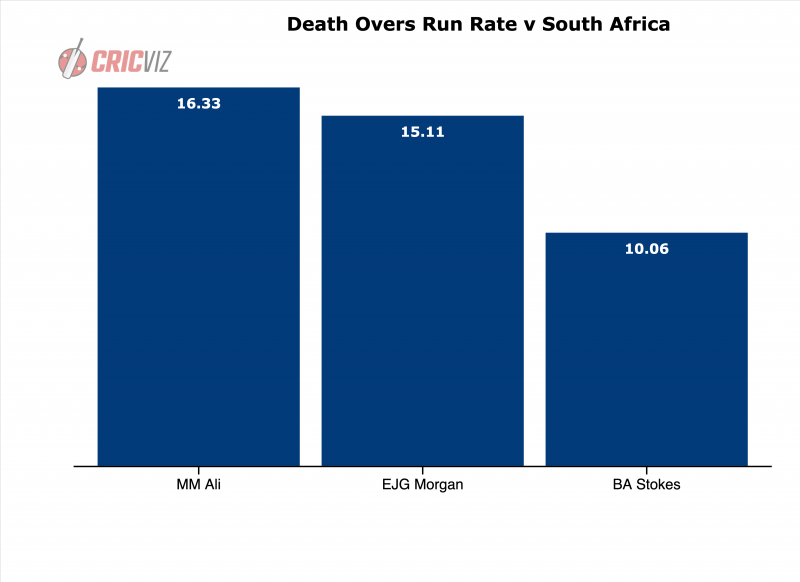 Those death-over statistics are clearly superb but look a little closer and there is a strong argument that England can get more out of the three players in question through the middle overs by being more flexible with their positions in the batting order.

In last week’s CricViz column, Ben Jones superbly documented Moeen’s supreme strength against spin bowling, advocating that he should bat higher in the batting order so he could face more spin. In the South Africa series Morgan faced 26 balls of spin and scored at 6.92 runs per over; Stokes faced eight and scored at 6.85, while Moeen did not face a single delivery. The argument for moving Moeen up the order is further strengthened by the evolution of Morgan’s game in recent years which suggests he should bat lower in the order, swapping places with Moeen.

Since 2016 Morgan has clearly become a significantly more powerful batsman, as indicated by our CricViz Power Rating which is an advanced measure that evaluates the ability of players to find and clear the ropes relative to the shot-type and shot-connection. In addition to this greater power Morgan is also starting faster, as illustrated by his rising first 10-balls run rate. In the last two years Morgan’s death-overs run rate of 13.81 runs an over is the best in the world among players to have faced 150 balls or more in the phase. While Morgan’s scoring rate is on the rise this is largely confined to his batting against pace – he still remains vulnerable against spin. These statistics all point to him moving down the order, to act as a finisher, which would in turn allow Moeen to move up. 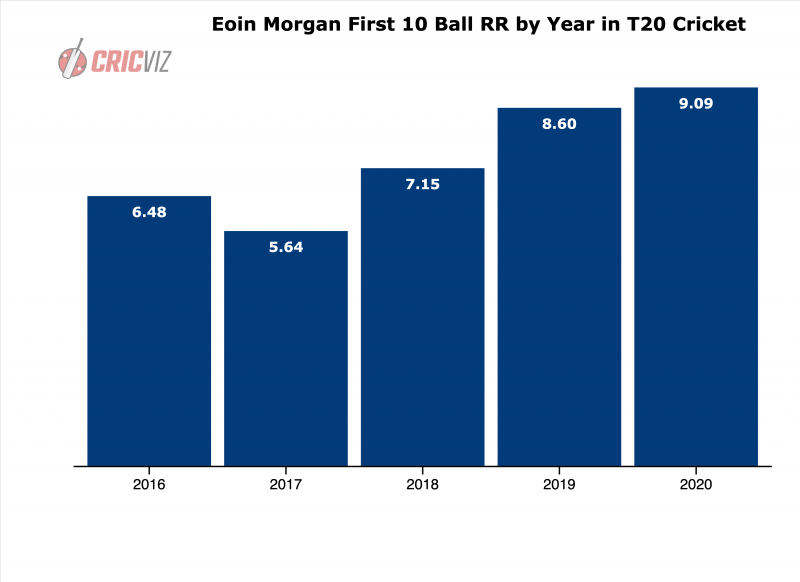 While Moeen is defined by his spin strength and Morgan by increased power and faster starts, Stokes is defined by slow starts and rapid acceleration. Stokes’ strike rate in his first 10 balls of 114 is the 174th highest in the CricViz database – far from impressive. But his strike rate thereafter rises to an astonishing 164 – the 16th highest in our database. These statistics support the idea of getting Stokes in as early as possible, allowing him time to play himself in. England should look to be flexible with Stokes’ position in the order, sliding him up – but also down, depending on the situation. There’s an argument that he could even come in ahead of Bairstow at No.3 in instances where England lose an early wicket.

England have a middle order that is ideally suited to be deployed flexibly. However, so far there is no evidence to suggest England are ready to adopt this and while they handled the death overs well in the South Africa series, both at East London and Durban they encountered clear problems through the middle period which saw them lose significant ground in the match. In both instances their death overs acceleration brought them back into the game and somewhat masked the problems earlier in the innings. Victory in the series should not see England ignore these issues, though. Utilising the trio of Moeen, Stokes and Morgan and their respective strengths and weaknesses more effectively is a clear area for improvement. 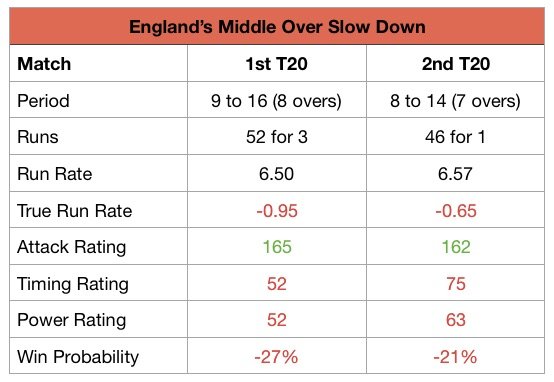 The return of Stokes and Moeen cost Sam Curran his spot in the team at No.7, but in reality his exchange for a frontline batsman – Joe Denly for two matches and David Malan for one – added very little to England’s batting and robbed them of an attacking new-ball option. Based on numbers alone it is very hard to make a case for Denly’s selection in England’s T20I side. According to CricViz Match Impact he is, by some distance, the worst option England have at their disposal. His series returns of four runs in two innings may well be his final contributions to this team. 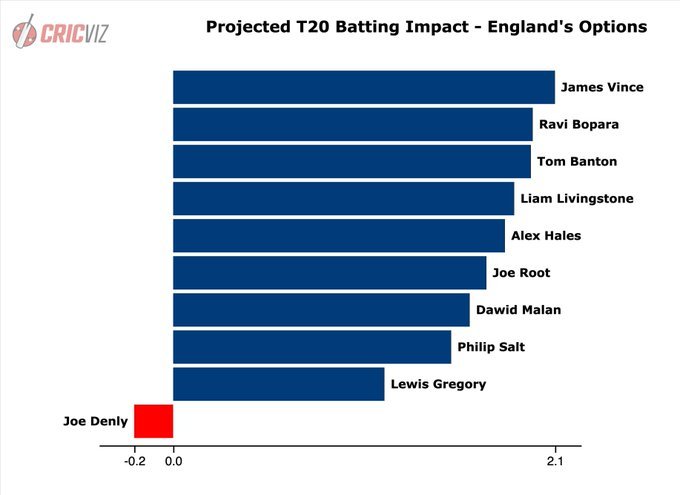 England have many better options to fill that spot, whether as a pure batsman, a batsman who can bowl or a bowling all-rounder. Malan was given one game due to Denly’s illness and struggled to make an impact. He might consider himself unfortunate to have missed out in the first two games but he now finds himself in a hard-fought battle among a coterie of franchise players and the forgotten man Joe Root for the final spot in the team.

The all-round skills of Stokes and Moeen enable that last pick in the team to be something of a luxury. But that does not mean England should simply waste it on the next best batsman not currently in the team. T20 cricket is a game of very fine margins and England should seek every gain that they can make. That last spot may well go to a batsman but if it does it should go to a batsman best suited to exploit the period of the game he is likely to find himself batting in – most probably the death overs, or indeed, given the lack of potency of England in the powerplay they may be better off selecting an additional bowler. These decisions cannot and must not be taken lightly.

Perhaps the biggest area for concern for England from this series was their powerplay bowling. Across the three matches England only took one powerplay wicket and conceded runs at an eye-watering 9.95 runs per over. In some respects this should not come as a surprise: England’s pace attack is very death-orientated, with Chris Jordan and Tom Curran heavily favouring the phase. Mark Wood’s ball-speed and attacking lengths offer England a wicket-taking option in the powerplay but he is not a natural swing bowler. England’s lack of potency in the first six overs is a concern moving forward: even Jofra Archer, who missed this series due to injury, is more of a run-saver than a wicket-taker and is stronger at the death.

In this series England used Moeen regularly in the powerplay. The seven powerplay overs he bowled across the three matches was only one fewer than he had bowled in the entirety of his international career to date. Morgan explained that this was driven by his positive match-up with the left-handed Quinton de Kock, but it also had the added bonus of allowing England to save their death quicks for later in the innings.

However, moving forward England may feel the need to consider a specialist new-ball quick to provide early breakthroughs. In Sam Curran and the discarded David Willey England do have two powerplay specialists, renowned for their ability to swing the ball early on, and in Willey’s case he is a proven wicket-taker in the phase. One of these two left-armers could potentially replace one of the frontline quicks – Wood, Jordan, or Curran in the team, or given their batting ability, could conceivably slot in at number seven. Taking early wickets is one of the most significant drivers of success in T20 cricket and England must not neglect this phase, nor rely on Archer’s return to improve their fortunes.