Graeme Hick, who celebrates his birthday on May 23, was a giant in county cricket, who struggled to transfer his talent to the biggest stage. In the 1999 edition of Wisden, Peter Roebuck reflected on his career.

Upon the abandonment of the match in which he scored his 100th hundred, Graeme Hick walked across a damp and emptying ground in Worcester and into the arms of his daughters. It was an ordinary thing to do, but it was noticed because it said something about a cricketer who had once seemed a fearless gladiator, but whose confidence had slowly been eroded.

Always he had seemed distant. A fellow could watch him bat a hundred times and still not feel close. Suddenly, he seemed human, warm and vulnerable, a quiet man in a noisy place. Watching him, it was hard to believe he really wanted to throw himself back into the hurly-burly.

His upbringing was simple and secure, and did not prepare him for the conflict

Hick was seen again, two months later, sitting alone upon the ridiculously exposed area that serves as the players’ balcony in Leeds. A Test match hung in the balance and much depended on his contribution. He had been recalled after scoring heavily at Worcester, an amiable place which he has made his home. The teams threw themselves at each other, and the crowd was transfixed. Here was a chance for Hick to impose himself, to use his power, to turn the match, and to secure a place in the team for Australia. It was not to be. Twice Hick fell cheaply, caught in the covers off poorly executed strokes. Throughout, he seemed stiff. Of course, he was not alone in his failures. But his failures have always been noticed, because of the expectations, and his appearance, and his extraordinary successes.

He played again at the Oval, against Sri Lanka, and hit a century. A place on the Ashes tour beckoned – until he was upstaged by a bigger hundred from John Crawley. Hedging their bets, the selectors put Hick on standby. He was duly summoned and thrown into the hotpot in Perth. After an embarrassing failure in the first innings to a stroke played with bat and body far apart, he contributed a rousing effort in a lost cause, hooking and driving without inhibition and with immense force. But power and authority are not the same. In Sydney, in the final Test, the whole series seemed to rest on his shoulders. Perhaps it was an unfair burden. All England willed him to punch his weight. Instead, he held back: tightening, trying too hard, uncertain of his tempo. Perhaps he is too conscientious, and accordingly unable to take the brave decision or to execute it with his whole heart. It may be his fate to be remembered as a remarkable cricketer and a monumental scorer of runs, as a player fit and reliable, yet incapable of taking the extra step; in short, a player whose finest moments came along at times of their own choosing. Considering his achievements, it might seem a harsh judgement. More leeway is given elsewhere. Sport forgives those who cannot contain themselves on the field, whose careers consist of flashes of brilliance, calling them charming and romantic and misunderstood. Sport also forgives those who must scrape around for their runs. But it will not smile upon those who do not deliver upon their promises, even if they did not make those promises themselves.

Hick is being criticised when he ought to be celebrated. It is hard to stop this mood creeping in

It was Hick’s fate to be given an ability that did not suit his temperament. It took him on a long journey, across the world and into himself, took him further than he cared to go. His upbringing was simple and secure, and did not prepare him for the conflict. He grew up on a tobacco farm in Trelawney, not so far from Harare. His family had an English heritage and lots of Yorkshire blood, and his father played for the local cricket team, though not terribly well. Hick was confident in these surroundings with the sunshine and the emotional warmth. He hung a cricket ball from a tree and began practising in his uncreased way, building a game that had no nooks or crannies, no subtleties, a game founded upon straight lines and trust. He has always been a performer rather than a downright competitor. 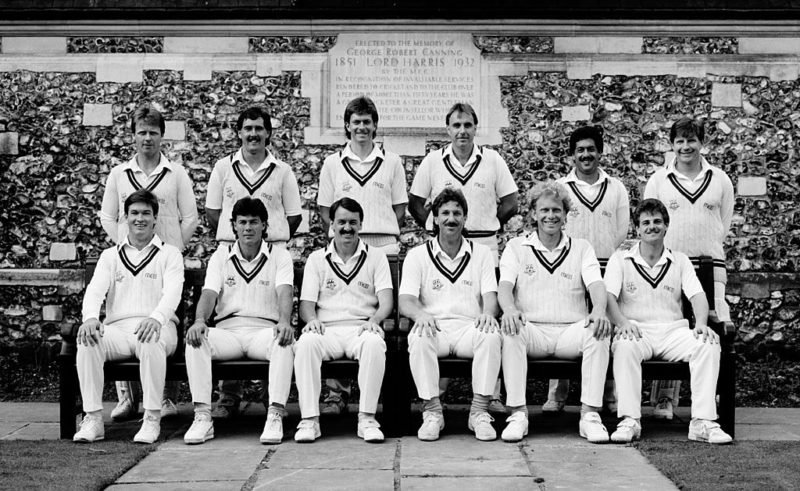 Hick attended prep school and Prince Edward High School, ordered places with a sense of right and wrong. Although an uninspired student, he was obedient and respectful, as he has been throughout his career in cricket. It is hard to recall any tantrums, and he has not been greedy or vainglorious or obsessed with figures. To the contrary: he has batted at first wicket down for his club, hardly missing a match, taking catches at second slip or fielding in the deep, and showing an athleticism astonishing in such a big man.

And yet something was held back. Hick has not been a leader, clapping his hands upon the field or grabbing the ball at a telling moment. Significantly, he has been reluctant to work upon his gentle off-spinners, which is not the approach taken by Viv or Sachin or Steve Waugh. Perhaps he could not imagine anyone losing his wicket to such nonsense. Or perhaps he was unwilling to put himself in places where he might be vulnerable.

At times, he has looked alarmingly baffled, bewildered by the game’s betrayals and shaken by its scrutiny

The feeling arises that Hick is being criticised when he ought to be celebrated. It is hard to stop this mood creeping in. We had thought he belonged in the highest class and judged him by its standards. Perhaps we were misguided. Our expectations may have been too high. It did not help Hick that he cut such an impressive figure, and it was easy to forget that he had been a sickly stick insect in his boyhood, and that meningitis had bedevilled his teenage years. Only in young adulthood did he blossom.

Expectation did not rest easily upon him. Any hopes he had of a quiet entry into county cricket were swiftly ended. English cricket was in the doldrums. Nor did it help that Hick found himself in Worcester and not London, where he might have been pushed and cursed. And he had a long time to wait before he could play Test cricket. It would hardly be surprising if something went missing in those seven years, waiting to qualify for England. Had he played at 21 or 22, he might have risen to the heights. Most great players burst into Test cricket at an early age, before adulthood has brought its doubts. Provoked by Hick’s reputation, the top bowlers of the age probed for weaknesses, waited for their man. 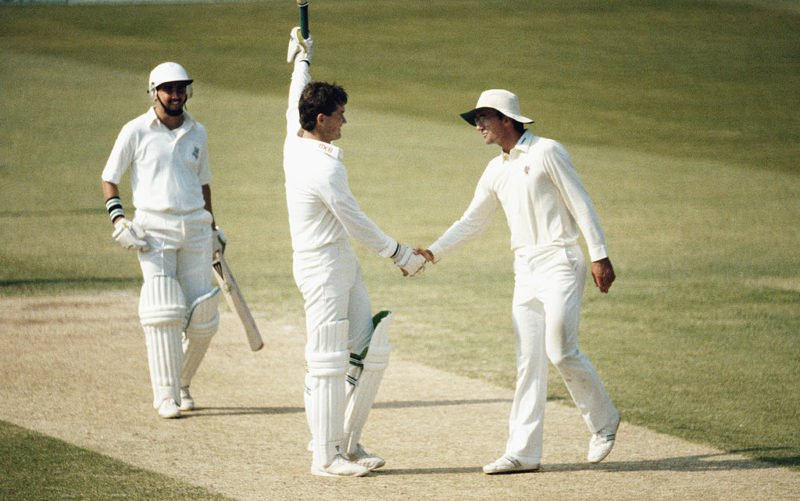 Conceivably, those years in county cricket lulled him, and the rest of us, into a false sense of security. Faults were not confronted and corrected. Hick may also have felt comfortable within the confines and privacies of the county game. Only the most ruthless analysts detected important faults. Most particularly, they saw a heaviness of foot and shot that made late movement an enemy. They saw, too, that Hick had a weakness against balls rising sharply at his shoulders. Torn between hooking, ducking, parrying and evading, he could appear confused, even frozen.

Between them, the long wait and the problems posed by bumpers bit into Hick’s confidence. At times, he has looked alarmingly baffled, bewildered by the game’s betrayals and shaken by its scrutiny. He has not relished the critical world. Nor has he been able to resolve his own difficulties. Whatever his technical flaws, his limitations are mental.

Something was missing, a spark, an ability to be himself in the most demanding situations

Happily, there is much to be said on Hick’s behalf. His cultured and forceful strokeplay has given enormous enjoyment to crowds across the world. He has hardly ever let his supporters down, or his team-mates, or the game itself. He has scored a mountain of runs, few of them given away. The regularity with which hundreds came along said much about his fitness, discipline and concentration. He has been an impressive and largely impassive professional, one of the heaviest scorers to appear in the last 20 years, and one of the best tall batsmen. His accomplishments are extraordinary. Only in Test cricket has Hick been found wanting, and ever there his record is not so bad. None the less, something was missing, a spark, an ability to be himself in the most demanding situations. 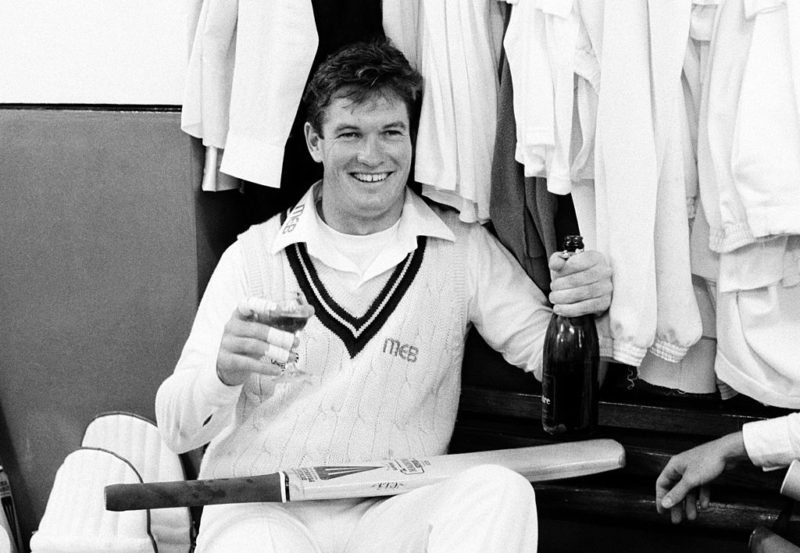 It has not been Hick’s fate to enjoy the fierceness of Test cricket. He was given almost all the characteristics demanded by greatness. Conviction alone was missing. It says much for him that he has remained unbowed by dismay. He has been a punishing and faithful cricketer, commanding where he is comfortable, and quiet elsewhere. Throughout, he has searched for the contentment and simplicity he knew in his early days, and he has found it in the same place, at home with his family. It might sound like a defeat but it isn’t a defeat at all. Indeed, it’s a sort of victory.

Graeme Hick scored 136 first-class centuries – only seven batsman have more – but only six in Tests. He scored a whopping 41,112 first-class runs at 52.43 during a domestic career that spanned 25 years.