In the 1960s, when England had a plethora of off-spin options, David Allen emerged as their leading slow bowler. His Wisden obituary recalled a fine career.

When Graeme Swann retired amid the wreckage of the 2013/14 Ashes, England’s spin resources were so threadbare that, last summer, a batting all-rounder filled the breach. When Jim Laker played his final Test at the end of the equally traumatic 1958/59 Ashes, things could hardly have been more different. Queuing up to replace him were John Mortimore, Fred Titmus, Ray Illingworth and David Allen. Jim Parks, who would keep wicket in nearly half his Tests, said: “David was the biggest spinner of the four of them.” Even so, it surprised many when Allen eventually got a look-in.

His Test debut, against West Indies at Bridgetown in 1959/60, represented an extraordinary turnaround: a year earlier he had been close to retirement. But he took his chance, going on to claim 122 wickets in 39 Tests; he also made five fifties. Until his final match in 1966, he was one of England’s most reliable performers.

For Gloucestershire, though, he was one of the post-war greats. In a 19-year career he took 882 wickets and scored 7,510 runs. When conditions were favourable, he and fellow off-spinner Mortimore operated like hired assassins. In 1969 – with Illingworth’s departure from Yorkshire having broken up his partnership with Don Wilson – Alan Gibson wrote that there was “no pair of spinners in the country so likely to bowl any side out quickly on a turning wicket”.

Allen had a classic rocking action that helped the occasional ball drift away from the right-hander, and a short run-up, but his lavish turn did not come at the expense of accuracy. Harder, bouncier Test wickets suited him, and his record on tour was better than at home. He loved “the pomp and ceremony of Test cricket” and the camaraderie of touring. “All his stories were about Barbados or Brisbane, never Peterborough or Derby,” said Gloucestershire team-mate David Green. 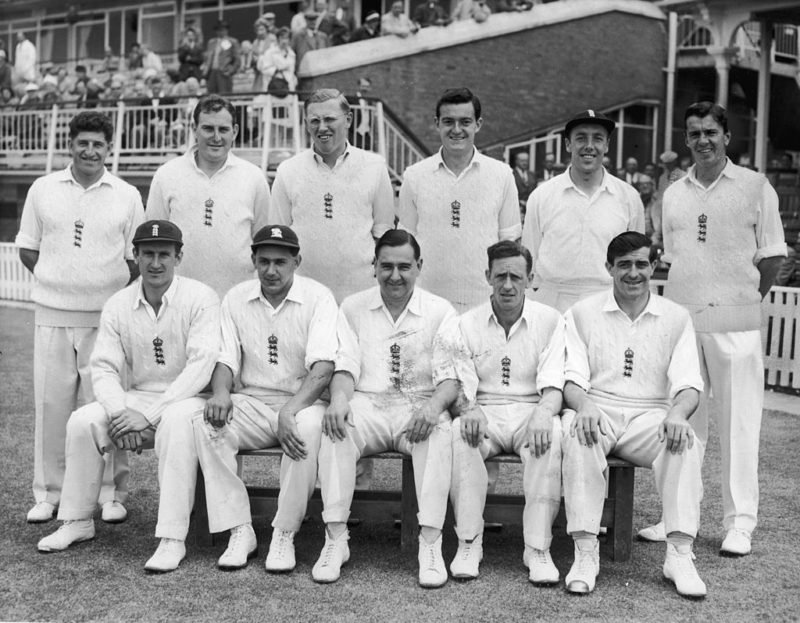 Allen was a significant figure in two famous Tests. At Old Trafford in the 1961 Ashes, he seemed to be bowling England to victory, with 4-38 off 37 overs, when Peter May asked him to tempt Alan Davidson into hitting out. Davidson promptly struck Allen for 20 in an over. May panicked and took him off; Davidson and Graham McKenzie added 98 for the last wicket, providing a platform for Richie Benaud’s fourth-innings heroics. A gloomy Allen caught the train for Gloucestershire’s next match. “It was a huge disappointment to lose,” he said. “Sat on that train, going down to Pontypridd on my own, it got worse.”

Two years later came the Lord’s thriller against West Indies. In his own, much-practised, version Allen had hatched a plan to steer England to victory in a frenzied final over, but had to rethink when Derek Shackleton failed to heed his instruction to “run whatever happens” – and was run out. When Colin Cowdrey, arm in a sling, arrived at the non-striker’s end, Allen adapted his tactics: he would edge a four off Wes Hall’s penultimate ball, then scamper a single to secure a tie. Hall, though, had other ideas, and Allen could only block the final two balls.

“They might bend the rules, but in Gloucestershire we don’t”

His moment in the spotlight had been a long time coming. A Bristolian educated at Cotham Grammar School, Allen had made his debut for Gloucestershire in 1953, aged 17. In his fifth match he bowled them to a last-over victory against the champions Surrey, taking 6-13 off 12.4 overs (and 9-57 in all). He was cheered off the ground by Cotham pupils. But his career stalled. With Mortimore and Bomber Wells to bowl off-spin, and Sam Cook’s slow left–arm, Gloucestershire had an abundance of spin options.

At the end of the 1958 season, Allen’s frustration boiled over. Now with a fiancée but a dead-end winter job – one task was delivering wages across Bristol, armed with a chair leg in case he was accosted – he spelled out his concerns to the club committee. They promised to find him better employment, and urged patience. It proved wise counsel: the new captain Tom Graveney was less tolerant of Wells’s eccentricities, and in 1959 Allen took 84 wickets at 15. He was called up for the final Test against India and, although he withdrew through injury, earned a place on the winter tour to the Caribbean.

It was not expected to be a demanding trip. Allen recalled: “R. W. V. Robins was the manager. ‘You’re not going to be playing much cricket,’ he told me. ‘And I’ll have a lot of speeches to make. So I’d like you to look after my briefcase. That’ll keep you busy.’ ” But Allen made the first Test, though he had to wait for the second innings of his second match, at Port-of-Spain, to earn his first wicket. Allen toured India and Pakistan in 1961–62, playing all eight Tests and taking 34 wickets at 27, including nine at Calcutta.

In Pakistan, he claimed 5-30 in the second innings at Dacca, only for Hanif Mohammad to deny England victory. He made his first trip to Australia the following winter, but the selectors preferred Titmus. Allen was unimpressed with Ted Dexter’s captaincy. Years later, asked to sign a copy of E. M. Wellings’s tour book Dexter versus Benaud, he wrote in an accompanying letter: “It should have been titled ‘Dexter 0 Benaud 5’, and that’s only the half-time score.” But the trip was not wasted: at Sydney he took 5-113 in the match and, helped by Alec Bedser, worked out a longer run-up. 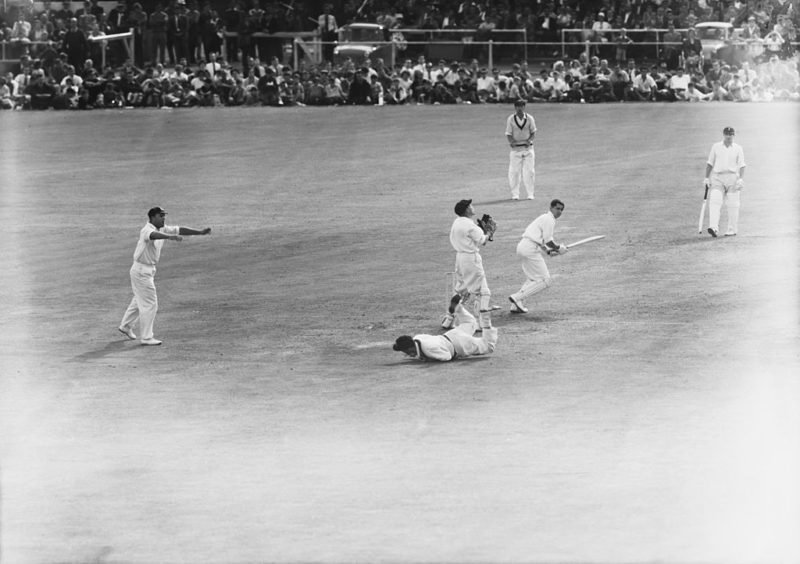 Off the field “DA” was inseparable from wicketkeeper John Murray. At one function the players wore their new polo shirts, prompting a complaint about informality from E. W. Swanton. At the next cocktail party, Allen and Murray arrived in dinner jackets and black ties. Allen was more in tune with M.J.K. Smith’s leadership in South Africa in 1964/65, and topped the Test averages with 17 wickets at 26 – including 5-41 in the victory at Durban, the only result of the series.

He also did some priceless work for Gloucestershire, visiting the parents of two emerging South African players, Mike Procter and Barry Richards, to issue invitations to play in the county. When MCC relaxed the rules on overseas cricketers, Procter joined Gloucestershire.

He enjoyed less success on a second trip to Australia and New Zealand, but did take 4-47 in a thumping win at Sydney. Parks had made two stumpings off Allen’s bowling in the first innings. “There was one I still dream about – Bob Cowper,” Parks recalled. “David made it possible, getting that bounce and turn.” Allen’s Test career ended after one appearance against West Indies in 1966. He finished with 35 wickets in 14 Tests at home, and 87 in 25 overseas. “Garry Sobers thought DA was a great bowler,” said Green.

For Gloucestershire his best summer was 1961, when he did the double for the only time, hitting his solitary hundred, against Nottinghamshire at Trent Bridge. His best bowling was 8-34 against Sussex at Lydney in June 1969, when he was acting captain, having already been passed over for the leadership in favour of Tony Brown. The two had an uneasy relationship, and in 1972 Allen was left out of his own benefit match, against Lancashire at Cheltenham, to give a debut to David Graveney. He retired at the end of the summer with an overall record of 1,209 wickets at 23, and 9,291 runs at 18. 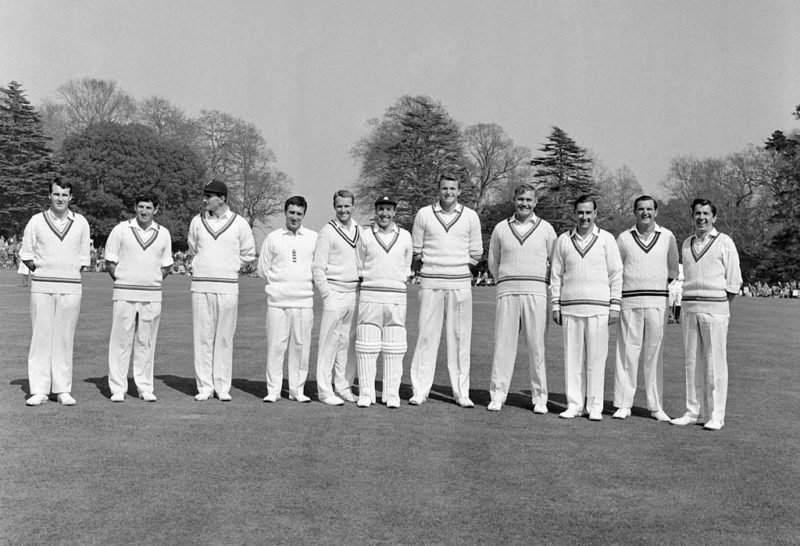 The Duke of Norfolk’s XI prior to their match against the West Indies. David Allen far right

He went to work for Harveys, the Bristol sherry merchants, and with Parks revived the Old England XI, who played charity matches. Allen’s love of the game ran deep, and he never forgot the lessons learned on the last afternoon against Sussex at Cheltenham in his first summer. Gloucestershire’s run-chase had been stymied when David Sheppard instructed his bowlers to aim outside leg. The crowd protested, and the practice ceased after Gloucestershire captain Jack Crapp came on to the field to make his feelings known.

When Ian Thomson took three quick wickets, Allen sauntered in at No.11, ostentatiously using up time. The game was saved. Pleased with his efforts, he was stunned when Crapp grabbed him by the collar and told him his career with Gloucestershire would be over if he ever resorted to sharp practice again: “They might bend the rules, but in Gloucestershire we don’t.”

He served the club in a variety of roles, including president, a job he took on with support from his wife, Joyce. He was a familiar face at his local club side Thornbury, where his distinctive West Country tones could be heard gently encouraging generations of young players. “He was still coaching during his final illness,” his wife said. “Cricket was his life.”