Stuart Broad set a template for his career with the lethal burst that swung the 2009 Ashes-deciding Oval Test in England’s favour. It earned him a Wisden Cricketer of the Year award.

It was with his devastating, series-winning, career-defining bowling spell at The Oval that Stuart Broad made an indelible mark on Ashes history; but it was in the previous, chastening Test at Headingley that he helped shift the momentum that was swinging Australia’s way.

When England, still leading the series 1-0, staggered to the end of the second day of the Fourth Test, they were teetering at 82 for five in their second innings, still 261 behind Australia and heading for the most comprehensive defeat. What happened next not only irritated Australia, but played no small part in England regaining their self-esteem for the decider.

“It was typical Andy Flower,” says Broad. “He gathered those of us still to bat on the Sunday morning and said ‘I don’t care how you do it. You can leave every ball, block every ball or hit every ball for four, but go out there and show some fight. We must leave this ground with something to show for our efforts.’ Matty Prior started it by going after them and they started to get a bit frustrated.

“Then Graeme Swann came in. I always enjoy batting with him, because we hit the ball in different areas but score at a decent pace, and we just got a bit of momentum going. It was a good laugh, the crowd got behind us and the atmosphere was fantastic. We clawed a little bit back and it gave us a lot of confidence.”

In an eighth-wicket stand of 108 in 12.3 overs, Broad scored 61 to follow career-best figures of six for 91. He might not have been selected had Andrew Flintoff been fit. It did not stop Australia levelling the series with an innings victory, but some pride had been restored and foundations laid for what was to come in Kennington.

Stuart Christopher John Broad was born in Nottingham on June 24, 1986, to former England batsman Chris and mother Carole, “the most positive person you will ever meet,” according to her son. “Mum texted me that Sunday morning at Headingley to say ‘get a hundred runs ahead and then take a few early wickets and you could be back in the match’.” She was hoping for a repeat of the 1981 partnership there between Ian Botham and Graham Dilley that went into folklore.

Broad was always destined to be a cricketer, from the times when he would get his sister Gemma, later analyst for the England one-day and women’s teams, to throw a ball at him in the garden, and he would play on the Trent Bridge outfield with Philip Robinson, son of his dad’s opening partner Tim.

Yet it was at hockey that he initially thrived, before a growth spurt and a spell in Victoria, Australia, with Hoppers Crossing transformed him from an opening batsman into a bowler. He earned his first-class debut with Leicestershire in 2005, before his 19th birthday.

“Up until I was 16 I just turned my arm over with the keeper stood up, trying to bowl maidens and swinging it nicely,” says Broad. “My most successful sport then was hockey, where I had trials with England. I was a goalie. I was short then and pretty fearless, but it came to an end when I was hit by a fierce shot in the leg. I was 17 and getting more serious about cricket.”

Cricket was in his genes, and he was also influenced by Frank Hayes and David Steele, his coaches at Oakham School. Broad’s paternal grandfather would take him to Lord’s once a year to watch England. “We would get up at 5.30am to get the bus then the train to London,” says Broad. “There was the one time [in 1997] when Glenn McGrath was virtually unplayable. There was another when I saw Jimmy Anderson playing against South Africa. I was a little kid and he was bowling for England, and he’s only four years older than me! 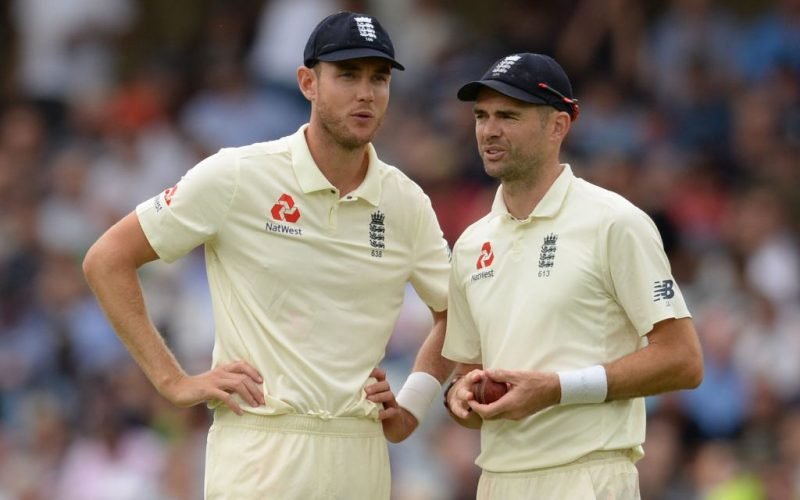 In 116 Tests played together, James Anderson and Stuart Broad have bagged a staggering 883 wickets between them

“I was a regular viewer on television too. I was watching with my grandparents when Andrew Caddick took four wickets in an over at Headingley against West Indies, and Darren Gough was another favourite. I was always a big fan of seeing wickets fall. Watching someone get a five-for was much better for me than seeing a batsman get a hundred.”

After his one-day international debut against Pakistan in 2006, Broad was selected for the squad against India at Lord’s in 2007, but overlooked in favour of Chris Tremlett. His Test debut had to wait until the following winter and the bowler’s graveyard of the Sinhalese Sports Club in Colombo. Since then, progress has been sustained and rapid.

“I always look at my attitude as competitiveness and a passion for the game, but there are times when it can bubble over”

Another breakthrough came in 2008, when Broad worked with Ottis Gibson at England’s academy in Loughborough and was told that a bowling action remodelled by Kevin Shine was not working. “Ottis told me I was too chest-on, so I went back to how I used to be,” says Broad. “I stood still for three months when I was trying to change too much. I wouldn’t blame Kevin Shine, he was trying to look after my body. At the end of the day he made a suggestion and I took it on.”

This progress culminated in Broad becoming perhaps the first really tall England bowler to swing the ball both ways at 90mph, a heady mix that proved too much for Ricky Ponting and his team at The Oval. A 12-over spell of five for 37 included four for eight in 21 balls. His freshness for the big moment had undoubtedly been helped by his mature decision not to go to the Indian Premier League earlier in 2009. 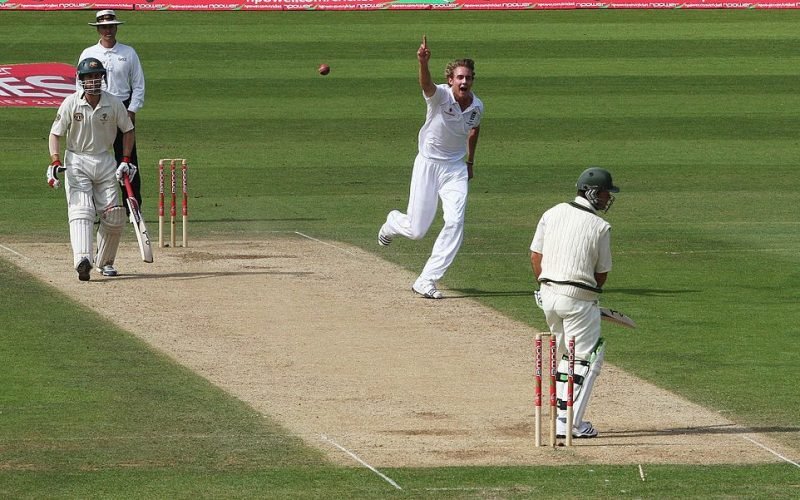 Ponting is castled by Broad at The Oval

“The Oval has given me a lot of confidence for what I can achieve,” says Broad. “There have been times in my Test career where I haven’t been sure where to go, whether to be an economical bowler or try to bowl bouncers and knock someone’s head off. The thing about The Oval was that I bowled the way that suits me best, trying to hit the top of off stump using a bit of variation.”

Broad’s manner will be familiar to anyone who watched his ultra-competitive father play for England, before the poacher became an ICC referee. “I always look at my attitude as competitiveness and a passion for the game, but there are times when it can bubble over, like with dad, and that’s something I’m working to control,” says Broad.

“My dad was a bowler in a batsman’s body, because he was so fiery, and I think as a bowler I have to be like that. There is nothing worse than seeing a bowler with no spirit or fight.” It is unlikely to be a failing of which he is ever accused.