After leading India to their third Under-19 World Cup title in 2012, Unmukt Chand looked the next big thing, but failed to make an impact thereafter. He explains why.

If everything went right for everyone, I would have been out there bumping fists with Virat Kohli, planning India’s long run chase against England to go 2-0 up in the series.

Wearing an India cap is a dream we all grew up with. No lucrative IPL contract can ever replace the soul-warming feel of the Indian cap. But there are only 15 players in the Indian team, so it can never go as planned for anyone but those 15. There are a lot of permutations and combinations that eventually take you to the top. Had this happened or had that happened, ‘I would be playing for the country’, cricketers say – but that’s something no one is interested in. So, what does it take to reach the next level?

One thing that is clear to me is that after a certain level, everyone is the same. Our skill sets might vary, techniques might be different and so too the approach, but as they say in Hindi, ‘bas 19-20 ka hi farak hota hai’. It’s just the slight difference between 19 and 20. A player can’t be defined by these aspects. What carries more weight is the mental aptitude to understand the situation, adapt one’s game and have that insatiable hunger to perform each time.

But this is something we are rarely taught. Few coaches discuss these aspects with players; instead, the easiest to tinker with is technique — a favourite for any coach and probably the worst for a player. A few failures and the first thing to be tinkered with is technique. It might help to an extent, but the game is not played with just technique; it’s about the ability to understand one’s game, minimise the chances of getting out and know how to score runs. Street smartness is important.

Till the junior level, if you had better skills than your opponent, you would mostly succeed. If you had better technique, you would be way ahead of other players. Your stature was daunting to the opposition. Just being talked about gave you so much confidence that you started out three paces ahead from the beginning. This changes when you graduate to the next level. Yes, one still talks about the best batsman or the best bowler in the other team, but you know that you can take him down if plans are executed well. In modern-day cricket, there is no difference between a Delhi or a Vidarbha. Vidarbha, in fact, thrashed the multiple champions to win the Ranji Trophy 2017/18.

I too fell into a technical rut. It took me a long time to come out of it. I was in so deep that I had forgotten to see the damn ball and score runs. Imagine an opening batsman saying this!

When I was young, I loved playing shots. I even used to embrace an edge to the boundary. I loved the sight of bowlers and fielders looking at me like I had all the luck – and it did seem that I got lucky almost every time. But the moment I became too serious about my batting, poof! All my gods left me. Opinions and advice started pouring in, and suddenly stance became a major concern. The gap between the feet, tapping, crouching, back lift, grip, bat on the ground or in the air, shuffle or no shuffle, so on and so forth. I didn’t realise that whatever feels good, helps you see the ball clearly, and gets you into the perfect position to execute a shot is the best stance for you. Simple.

Understand that I am not against technical changes. All I am saying is that there is a thin line between making the required changes and not sinking deeper. 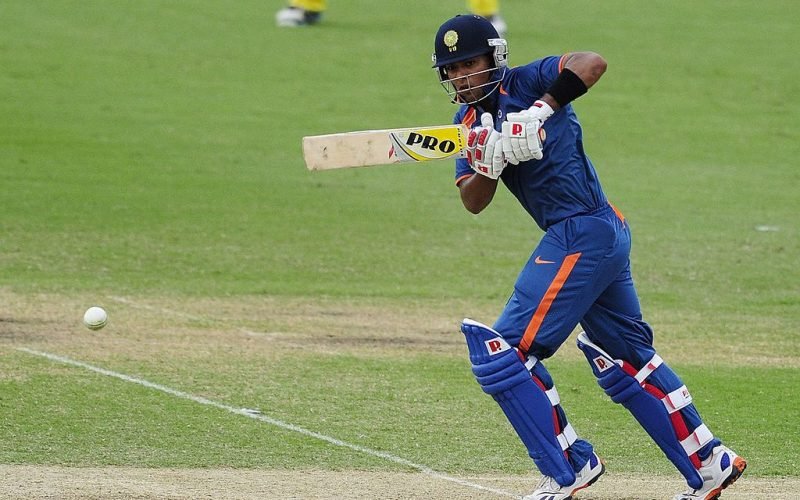 Of course, sometimes the simplest things are the most difficult to do. It requires effort and consistent application to just watch the ball and play without letting your mind go to technique or pre-determining strokes. I’ve failed many times trying to play orthodox cricket where there is excessive focus on playing in the ‘V’; on most such occasions, I have got out. My innings in the Under-19 World Cup final was one where I was least bothered about technique. My whole focus was on winning that match. Hence, I played according to the situation and I applied myself. I remember that in every game in which I put up a good show, the only thing constant was adaptability; I had no idea how my stance was or of any other mundane stuff.

It’s about the practice sessions too. Work on your game, but don’t let it confuse you. Remember, what’s natural to you should never be compromised. That’s one of my biggest lessons from recent years.

Cricket is a team sport, but it is also a personal battle.

With growing up and maturity comes too much analysis, which might lead to paralysis. Expectations when not met lead to insecurities, which hamper performance. Each dismissal takes you into a mental spiral, even as you see your fellow cricketers progressing to the next level. Somewhere in their success, you lose yourself. The more you try, the farther it goes away. For me too, my peers were representing the country one after the other and I was just missing the bus. There was a time two years ago when I was leading the India A side; all the players in that team have gone on to play for the national team, except me. That was a rude awakening. But you can’t stop.

That was when spirituality became my friend, and a way of life. The mantra is to keep working hard and smart. Don’t let comparisons bother you. Focus on yourself. We all have different journeys, but all roads lead to the same place, eventually, so believe in yours. Cricket is a team sport, but it is also a personal battle. 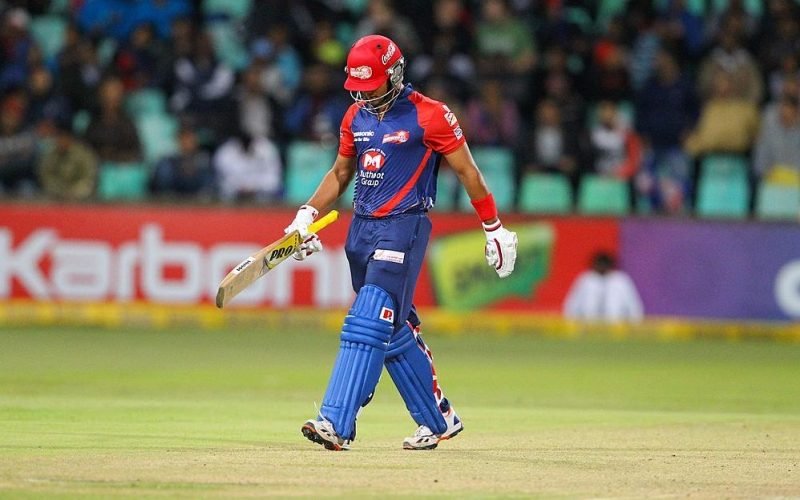 Unmukt Chand has played for three different teams in the IPL, but has failed to make an impact

Also, it is important to keep improving, but with the right mental outlook. Backing your strengths a 100 per cent is a quality of top cricketers. But if the focus is on the inevitable weaknesses, rather than the strengths, the negativity affects performance. For instance, my second Ranji Trophy season was a disaster. We played most of our games at the Roshanara Club in Delhi with a heavy green top, where the scores were low, and I struggled. I got out playing drives and back-foot punches, and was told to stop playing these shots. But these were my bread-and-butter strokes. A time had come when I would drive for a four and curse myself for hitting it again. You do realise how foolish that sounds, right? How would I ever score runs if I stopped playing shots that, you know, got me runs! But as stupid as it sounds, I was doing it!

Back then, I didn’t understand that it was not about not playing a certain shot, but about realising when to play it. Getting out a few times doesn’t mean I stop playing a certain way, when that way had got me runs as well. The lesson: Work on your game, but don’t restrict yourself.

Sometimes patterns do work, but, in the longer run, flexibility defines a player.

At the same time, don’t be afraid to unlearn. I have often tried to replicate what worked in previous innings in which I scored runs, but it didn’t work out the same way. How could it? Playing in the Dhaka Premier League, I got a hundred in the first game. I batted well, I was relaxed. We were batting second and it was very hot. After fielding for 50 overs, obviously the body was tired. But I batted with ease, my heartbeat was calm and slow, my mind was clear, and so, the runs flowed. The next game was a day after my birthday and I had slept late the previous night, so when I got in to bat after we won the toss, I was again not feeling energetic. I decided to be calm again, and it worked again: I got another hundred.

Now, I realised a pattern was forming. The next two games I tried to do the same, but I failed in both. Later, I realised my body was not in sync with my mind. We batted first in the third game and I was full of energy, but I deliberately tried to slow myself down, which was unnatural on that particular day. I should have played with the feeling I had at that moment.

Every game is different, every situation is a new one, and every day is a fresh start. How can you be the same yesterday and today? The best players don’t restrict themselves to fixed notions — they keep changing. Sometimes patterns do work, but, in the longer run, flexibility defines a player. You have to unlearn and start afresh every day. The most important thing is to enjoy this game of cricket. Let’s control the controllables and stay happy.

In the last year or so, I have twice been confronted with situations I was never ready for. I was captaining India A, but was dropped from the Delhi squad. Four days later, I didn’t get picked for the IPL. This came as a jolt to me as I understood that I had been reduced to a club-level cricketer. When I woke up after a terrible night, I realised that my love for cricket cannot be measured by selection or non-selection. The fear evaporated, and I practised more ardently, as a purity filtered into the way I played. As chance would have it, Delhi lost four games and I was recalled. I played two matches, scored consecutive fifties and earned one match award.

Related Story: How Dhoni helped Ishant Sharma save his spot in the Indian Test side

In the second instance, amid unnecessary politics, I was selected for the Vijay Hazare Trophy squad. A day before the first game, I broke my jaw in the nets. I was devastated — I could not afford to miss any more games. With taping and pills, I played the match against UP and scored a century. It was a fantastic feeling!

When you go out to bat, just remember why you first held that bat in the first place. You could have chosen a tennis racquet, a hockey stick, boxing gloves. But no, you chose this bat and ball and you chose it for a reason. Close your eyes and remember the first time you held it. It was simple then, and it should be simple now.