Tony Lock, who died on March 30, 1995, was an outstanding left-arm spinner for Surrey and England and a brilliant close-to-the-wicket fielder. His Wisden Almanack obituary revisited a sometimes controversial career.

Tony Lock was an aggressive, attacking left-arm spinner, who complemented ideally the subtleties of Jim Laker’s off-spin when Surrey were winning the County Championship every year from 1952 to 1958 and England regained, then retained, the Ashes; their names were twinned in cricket lore in a way usually associated with opening batsmen and fast bowlers. The final phase of his playing days saw him as a more orthodox slow bowler, relying on guile and flight as much as spin, and as a driving captain of Western Australia and Leicestershire.

Recommended to Surrey by H. D. G. Leveson Gower, Lock made his Championship debut in 1946, a week after his 17th birthday, against Kent at The Oval, and marked it with a hot catch at backward short leg off Alf Gover – the first of 830 in his career. In 1948, while doing National Service, he took six for 43 at Pontypridd, on a pitch “that afforded little assistance to bowlers”, when the Combined Services beat Glamorgan, that summer’s champions, and back at The Oval in 1949 he ousted the recently capped South Australian, John McMahon, as the left-arm spinner. 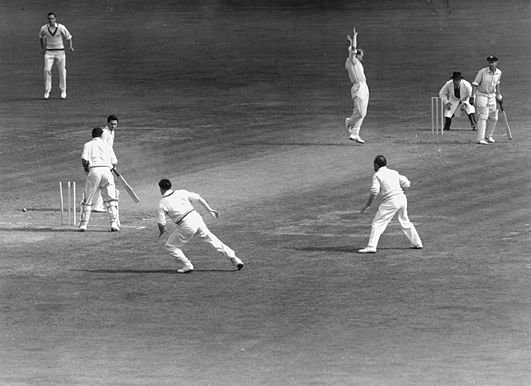 Next year, when Surrey shared the Championship with Lancashire, his contribution was 72 wickets at 22.38 and his reward – belatedly in his opinion – was his county cap. In 1951 he took 100 wickets for the first time. But the 1952 Wisden Almanack said he would struggle to gain higher honours “unless he imparts more spin to his leg-break”.

After two winters working at an indoor school in Croydon, he emerged with a lower trajectory that produced vicious spin at around medium-pace. Now the ball spat from leg stump to hit the top of the off, or spun devilishly and jumped shoulder high. Gone were his original high-arm action and the classical spin bowler’s loop, victims, it was said, of a low beam in those Croydon nets that had forced him to drop his arm.

His new method was far more effective but produced mutterings about its legitimacy. In 1952 he was called up for the Old Trafford Test against India, and took four for 36 in the second innings. But a week later, when Surrey played the tourists at The Oval, he was no-balled three times in two overs for throwing his quicker ball.

Raising the beam at the Croydon nets helped restore something of Lock’s original action, but he was again called for throwing in the West Indies in 1953-54 and for a time he refrained from bowling his faster ball. It was this delivery which drew the legendary lament from Doug Insole, the Essex captain, to the square-leg umpire when he was bowled by Lock in fading light: “How was I out then – run out?”

“When Lock appeals at The Oval,” as the old joke said, “someone’s out at Lord’s.”

Although picked for the First Test against Australia in 1953, he wore his spinning finger raw the day after selection and played in only the last two Tests. At Headingley, his resolute batting served England better than his bowling, but at The Oval his return of 21-9-45-5 on the third afternoon, along with Laker’s four for 75, was instrumental in Australia’s dismissal for 162. Next day, England regained the Ashes for the first time since 1932-33, and in the spring Wisden named him as one of the Five Cricketers of the Year.

It was a different story at Old Trafford in 1956, when Laker took 19 Australian wickets while Lock had to be content with the left-over, and economical match figures of one for 106 from 69 overs. He had enjoyed his own ten-wicket return three weeks earlier. After taking six for 29 in Kent’s first innings at Blackheath, he demolished their second innings with figures of 29.1-18-54-10. In 1957 he had a match return of 11 for 48 from 37.4 overs in the Oval Test against West Indies, and in the wet summer of 1958 he was utterly ruthless against the weak New Zealanders, taking 34 wickets at just 7.47 apiece.

He was a volatile, vulnerable man but he was an astonishingly durable cricketer and the memory of that will endure too.

On overseas tours, he was not quite the same threat, except on the soft pitches of New Zealand in 1958-59. There he took 13 Test wickets at less than nine apiece, but also saw himself on film, and was genuinely shocked by the imperfection of his action. “Had I known I was throwing I wouldn’t have bowled that way,” he said later. So he remodelled his action once more, but he still took his 100 wickets every year until 1962, his penultimate year at The Oval. He was no longer such a fearsome proposition in England but emerged as a better bowler overseas. 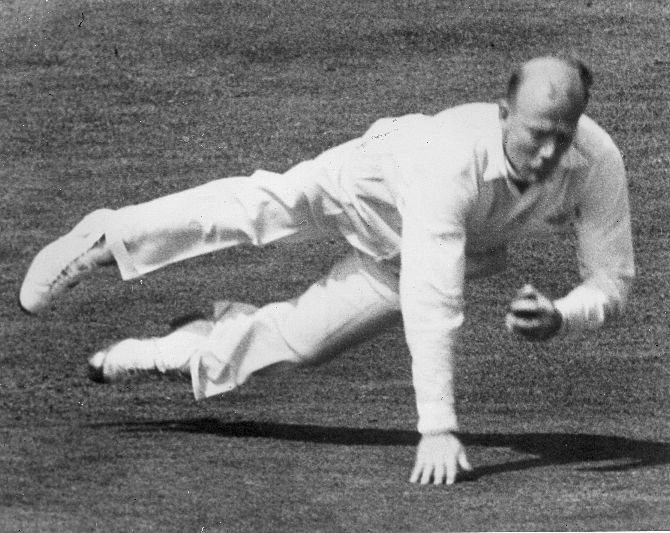 Lock was also known for his athleticism in the field

He was the leading wicket-taker on MCC’s tour of India and Pakistan in 1961-62 and, when he was omitted from the side for Australia in 1962-63, he went instead to play for Western Australia, where he took 32 wickets in the Sheffield Shield and immediately became a fixture. In 1966-67, he was the first post-war bowler to take 50 or more Shield wickets in a season. He assumed the captaincy in 1967-68 and led Western Australia to only their second Shield. Meanwhile, he had been recruited by Leicestershire for midweek games in 1965, and captained them in the next two seasons with such infectious enthusiasm that they rose from 14th in 1965 to second in 1967, then their highest position in the Championship.

There was an unexpected twist to this phase of his career when he was called to the Caribbean to replace the injured Titmus in 1967-68 and played in the last two Tests. In the final one, at Georgetown, his belligerent 89 in England’s first innings surpassed his previous highest first-class score, and put England on course for the draw that gave them the series. He was, Trevor Bailey wrote, “the ideal person to walk out to the crease when the match seemed lost”.

Lock continued as a coach in Perth and from 1987 to 1991 was a cricket professional at Mill Hill School in north London. His final years were overshadowed by two allegations of sexual abuse involving young girls, the second only months before his death from cancer. Cleared of both charges, he was nevertheless forced to sell some of his cricket memorabilia to meet his legal costs, and while the second court case was pending his wife died of a heart attack. He said bitterly just before he died that he would be remembered only for the charges and not for his cricket, but he will be proved wrong.

“There never has been a more aggressive spin bowler,” wrote David Frith in The Slow Men, and the aggression came out in his captaincy, his famous full-throated appealing (“When Lock appeals at The Oval,” as the old joke said, “someone’s out at Lord’s.”) and his marvellous catching. The spectacular ones, the sudden full-length dives, were the easy ones, recalled his Surrey team-mate Micky Stewart. His best were when he took the rockets, close in, without anyone noticing. Only W. G. Grace and Frank Woolley have taken more catches. Lock is also ninth in the list of all-time wicket takers with 2,844 at 19.23; 174 of those came in his 49 Tests, at 25.58. He was a volatile, vulnerable man but he was an astonishingly durable cricketer and the memory of that will endure too.