Tom Cartwright was not just a brilliant county seamer – he was a man of high principles and firm opinions. His Wisden obituary celebrated his achievements.

Tom Cartwright was a cricketer’s cricketer. Perhaps no player of his generation had so much respect from his colleagues – for his abilities, his character, which was forceful without being abrasive, and his love and knowledge of the game. Not everyone was so appreciative: committee men often thought him truculent, and he played only five Tests for England, a figure that does no justice to his skills or his standing.

Cartwright grew up in Coventry, and the family were forced out of their home for a month by wartime bombing. He himself started work in the Rootes car factory, but Warwickshire had spotted his batting, and in 1952 he accepted a pay cut to join the then county champions. He made his first-team debut, at Trent Bridge, when he was just 39 days past his 17th birthday, and made an unflustered 82 – no one younger had scored a Championship fifty since 1906. There was no instant stardom: immediately afterwards, he returned to his Rootes. The next season was harder when he was promoted to open and could not quite sustain the position.

National Service followed, and it was 1958 before Cartwright finally made a century, 128 against Kent, and secured his first-team place. He was bowling his in-swingers more now, and at Dudley the following summer came what he regarded as the pivotal moment of his career: “I just ran up and the ball swung away,” he told his biographer Stephen Chalke. “It was the first time I’d done that since I left school. The miracle was that I knew exactly what I’d done.”

In 1959 Cartwright scored 1,282 runs and took 80 wickets, was chosen for the Players, long-listed for the Caribbean tour, and talked about as Trevor Bailey’s successor; Warwickshire leapt up the table. After an injury-hit year in 1960, he returned to form with both bat and ball, and in 1962 became the first Warwickshire player to do the double since 1914. After a near-miss in 1963, he finally made his Test debut in the Old Trafford Ashes Test of 1964 when both teams passed 600. But Cartwright (“England’s best bowler” – Wisden) stoically got through 77 overs and enhanced his reputation, and attracted approving murmurs again in the rain-ruined draw at The Oval.

He was picked for that winter’s South African tour, but struggled with both injury and his distaste for apartheid – he was, then and always, left-wing in his politics. The following summer, Cartwright played twice more, taking six for 94 on the opening day at Trent Bridge when everything was overshadowed by Graeme Pollock’s batting. Before the close, he broke his thumb attempting a return catch: though he kept going and took two more wickets, he would never play another Test match. 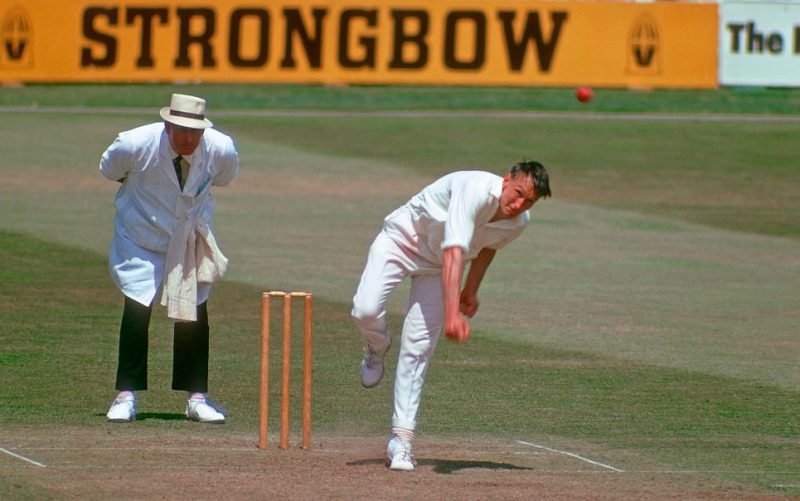 Tom Cartwright in action for Somerset, circa June 1974

His batting fell away in time but his bowling, on uncovered county pitches, remained awesome, and he averaged less than 20 for eight of the next ten seasons. He had a rare mixture of unrelenting accuracy, cunning and skill, which included the ability to bowl an inswinger from close to the stumps and an outswinger from the wings. Perhaps no one ever thought more about the art and craft of bowling.

All this was recognised in 1968 when Cartwright was picked again, this time – astonishingly – in the touring party for South Africa from which Basil D’Oliveira was omitted. There was a huge furore, and Cartwright was battling a shoulder injury, a reluctance to be away from his young family and his ambivalence about the morality of touring South Africa at all. Originally, he told Chalke, he believed the tour should go ahead, but then he saw a news item saying the whole white parliament in Cape Town had stood and cheered when the exclusion of the non-white D’Oliveira was announced. “When I read that, I went cold,” he said. It for ever remained unclear, perhaps even in Tom’s mind, which reason was uppermost for his withdrawal – though the injury was the one cited publicly. The rest really is history: D’Oliveira replaced him, South Africa cancelled the tour, and England would not play another Test against them until 1994.

“His incredible accuracy caused some people to classify him as ‘negative’... I cannot see how you could be negative if you have five close catchers and bowl every ball at the stumps”

Cartwright came back as strongly as ever for Warwickshire in 1969 and, amidst some messy committee-room manoeuvring, had the chance to become the county’s captain and/or coach. But he was attracted by an offer to coach at Millfield and play for Somerset, and defied precedent by fighting off an attempt by his former employers to make him qualify for a year. In 1972 he was appointed Somerset’s player-coach, and became the mentor of the club’s thrilling new generation until his refusal to kowtow before committee men led to a row in the toilet with the club chairman, and then the sack.

He had already settled in his wife’s home town of Neath and now he moved to Glamorgan, where he played for a while in 1977 before concentrating on the job of cricket manager, a rather thankless task, until 1983. Then, much more happily, he became director of coaching for the Welsh Cricket Association, a job he held for 23 years. Cartwright remained in charge of the Under-16s until he had a heart attack while shopping; he died a few days later. Generations of youngsters will remain grateful to him: “He always had time, always had faith in me,” said Ian Botham. But nothing will match the admiration of his contemporaries: “Tom was a master of his craft,” wrote David Green. “His incredible accuracy caused some people to classify him as ‘negative’… I cannot see how you could be negative if you have five close catchers and bowl every ball at the stumps.”