Either side of the First World War, Tiger Smith was one of the game’s finest wicketkeepers, and in old age became one of cricket’s great sages. His Wisden Obituary profiled an outstanding career.

The death of Ernest James (Tiger) Smith marks the end of an era in cricket. He had played with and against WG Grace; he had kept wicket for England against Australia before the First World War, and his connection with Warwickshire spanned no fewer than 75 years. He was the oldest living Test cricketer up to the time of his death.

Ernest James Smith – for over 70 years he had been known as Tiger, although a few Warwickshire associates called him Jim – was born in Benacre Street, Birmingham; a street which has now disappeared, that area of Birmingham having been replaced by a series of ring roads, underpasses and flyovers near the centre of the city. But it used to be about a mile from the Edgbaston ground, and, four months after Tiger Smith was born, Warwickshire played their first match at Edgbaston.

In 1902 Edgbaston became a Test match venue, and on May 31, thanks to Wilfred Rhodes, England bowled Australia out for 36. Young Smith was working at Cadbury’s then, and two years later he offered his services to Warwickshire as a wicketkeeper, although he had lost the tips of two fingers in a works accident.

He was taken on, and in 1904 played his first match for Warwickshire against the South African tourists. Right up to the end of his life he remembered the names of the South African side that came over in the googly summer of 1904, and he would rattle them off with reminiscent delight: Shalders, Tancred, Hathorn, Frank Mitchell, Sinclair, Llewellyn, Schwartz, White, SJ Snooke, Halliwell and Kotze. Wisden referred to him simply as Smith, and although he played in two other games there is no reference to him in the Warwickshire report for 1904.

For a time he was seconded to the MCC. It was during this period that he met WG Grace, and played in several matches for and against Grace’s London County Eleven. “Do you know what he’d do if he thought you weren’t any good?” chuckled Tiger. “He’d go out and buy a rabbit and put it in your cricketing bag.” While he was on the ground staff, Tiger duties sometimes included bowling to George Robey in the nets. 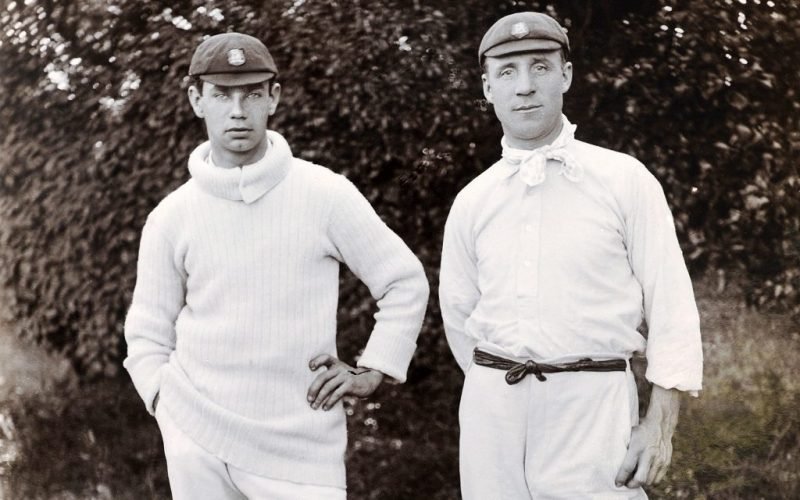 Tiger Smith (left) pictured with his Warwickshire teammate Crowther Charlesworth, circa May 1905

When Smith returned to Edgbaston he was apprenticed to Dick Lilley who had also worked at Cadbury’s before joining Warwickshire. Lilley himself, who played in 35 Test matches, 32 of them against Australia, had been for many years an opponent and close friend of J McC (“Old Jack”) Blackham, generally considered to be the first of the great modern wicketkeepers.

Tiger Smith was therefore fortunate in his apprenticeship to this cra within a craft, for he was to learn from the greatest contemporary exponent in England, and indirectly from Blackham. By the year 1910 he was coming into his own, playing in 19 of Warwickshire’s 20 matches. “More that a word of praise is due to Smith,” ran the Warwickshire report in Wisden, “who, called on to fill the vacancy created by Lilley’s retirement from wicketkeeping, acquitted himself with every credit.”

The next year, 1911, proved to be the most remarkable in Warwickshire’s history. Under the inspiring captaincy of FR Foster, the side, near the bottom of the table halfway through the season, eventually won 13 matches out of 20 and caused a cricket sensation by carrying off the Championship honours. Foster’s part in this achievement was outstanding, but Tiger Smith himself did remarkably well, with 40 catches and five stumpings in Championship matches; eleven of his victims were off Foster’s bowling.

It was said that he was the only wicketkeeper who could take the left-arm bowling of Foster, whose amazing swing and speed off the pitch rendered him as much a problem to his own wicketkeepers as to the opposing batsmen. And this was during a period when there were a number of county wicketkeepers of Test-match calibre playing regularly. In addition to Smith, there was Strudwick of Surrey, Huish of Kent, Dolphin of Yorkshire, Murrell of Middlesex, Humphries of Derbyshire, Buswell of Northamptonshire, Butt of Sussex, Oates of Nottinghamshire, and Brown of Hampshire – when he wasn’t bowling! 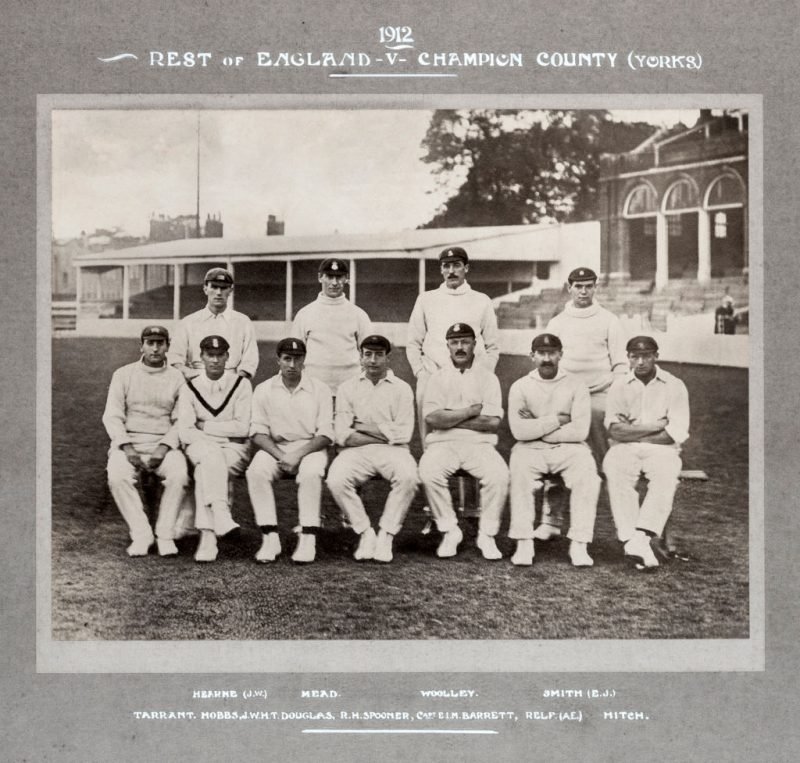 The Rest of England cricket team prior to their match against the County Champions Yorkshire at The Oval in September 1912. Tiger Smith is standing extreme right

Even more exciting for the young Tiger Smith – he was 25 in 1911 – than the winning of the Championship was the 1911/12 tour of Australia when he was chosen as understudy to Strudwick. In the event it was Smith who kept wicket in all the Test matches, except the first; probably because he could take Foster better and read his signals to the wicketkeeper – one of which, a change in step during the run up, to indicate the slower ball, was spotted by an Australian tram conductor.

England lost the first Test. The turning point of the series was perhaps Barnes’ opening spell of four wickets for one run in five overs in Australia’s first innings of the second Test. In this innings, Smith took three catches. England won the series 4-1 and Smith had eight catches and one stumping in his four Tests. Informed opinion has it that he excelled himself in the second Test. “Well, you’d got to be good at Melbourne, with 40,000 people watching you,” he reminisced.

His wicketkeeping was never less than competent, and he became a sound, attacking, opening batsman

In the third Test Smith stumped the left-handed Clem Hill first ball of Foster’s bowling when Hill was attempting a glide. PF Warner described the execution of this pre-arranged stratagem as one of the technical masterpieces of the game. Smith always contended that he did it again in the second innings, with Hill out by about 12in, but the umpire thought otherwise and Hill went on to make 98.

During the ill-fated, rain-ridden triangular Tournament of 1912, Tiger Smith played in all six Tests involving England, and he played in one more Test against South Africa in 1913. In the last two seasons before the final war he kept to the brilliant bowling of Percy Jeeves during the latter’s meteoric career for Warwickshire.

When cricket was resumed after the war, Tiger Smith was 33. He continued to play for Warwickshire until 1930. His wicketkeeping was never less than competent, and he became a sound, attacking, opening batsman. Two amazing games he played in during this period were against Hampshire in 1922 and Sussex in 1925. 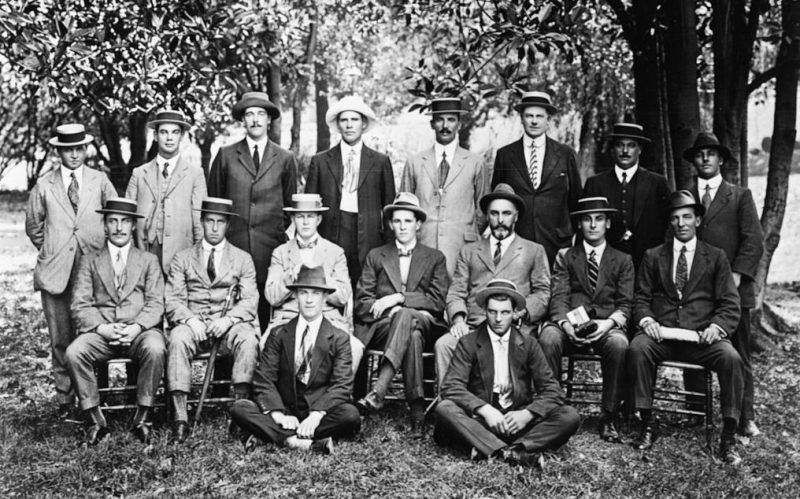 The MCC Team pictured prior to their 1911/1912 tour of Australia. Tiger Smith is standing second from left

In the first of these games, Hampshire were dismissed for 15 in their first innings. Following on 207 behind, they made 520 and won the match easily. Had Tiger stopped a ball on the leg side that went for four byes and had another fielder held a catch – the ball went through his hands and travelled to the boundary – Hampshire would have been all out for 7 in their first innings.

In the Sussex match, Warwickshire were set 391 to win in just under five hours and scored 392 for one in four hours and a quarter. All three Warwickshire batsmen made centuries: J.H. Parsons (now Canon J. H. Parsons) 124, Tiger Smith 139 not out and the Hon. F.S.G. Calthorpe 109 not out. Although this was not his highest score for Warwickshire – he made 177 against Derbyshire in 1927 and 173 against Kent the following year – Tiger always considered this innings against Sussex was the best he ever played.

In 1930 Smith retired as a player and went on the list of first-class umpires, standing in several Test matches. There was a brief period of coaching at Worcester; he was an air-raid warden during the Second World War, and in 1946 he became senior coach at Edgbaston, a position he filled with distinction until Tom Dollery succeeded him in 1955. Tiger, now 69, continued to supervise the indoor cricket school, where he was still taking an active part up to 1970, although he had gradually handed over the reins to Derief Taylor.

Is ‘Tiger’ watching? members would ask one another during the course of the day’s play

By the mid-1950s he had become almost a legendary figure. “The gatemen are beginning to know me now,” was one of his favourite quips. Is ‘Tiger’ watching? members would ask one another during the course of the day’s play. More often than not he was watching, from his seat in the corner of the players’ dining-room. Often he would be joined by his team-mates of the 1920s: Norman Kilner, Danny Mayer, Jack Parsons, George Paine, Jack Smart; sometimes WH Ashdown, the great Kent cricketer of that period, would join he party from his home in Rugby.

It wasn’t only with the players of the past that Tiger Smith discussed the game in its myriad facets. Cricketers from many counties – especially, says Leslie Deakins, since the death of CB Fry in 1956 – would come to Tiger with their batting problems. “Let’s see you in the middle first,” he would say, and afterwards he would diagnose the trouble. 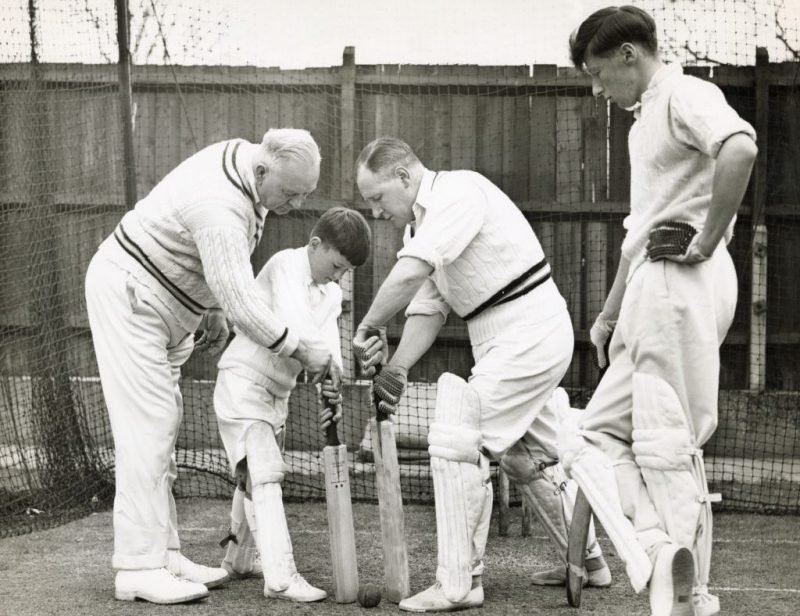 Tiger Smith (left) coaches a young boy in the nets with former Warwickshire cricketer and Aston Villa and England footballer Eric Houghton (centre) at Edgbaston, circa 1956. Houghton’s son Neil, who later became chairman of Warwickshire CCC, is standing on the right

Almost invariably, because of high intelligence, experience, and a knowledge of bone and muscle structure acquired in his first war experience with the St John Ambulance Brigade, plus that indefinable intuitive flair that only the truly gifted teacher commands, he would put his finger on what was wrong and indicate the remedy. In very recent years Mike Brearley has been one of those who testified to Tiger Smith’s remarkable powers in this direction.

He was a big, robust man, tall for a wicketkeeper, with wonderful agility in his prime. He had more than a little in common with that kind and manly Alfred Mynn of a former generation. Always a fighter, he had a razor-sharp sense of humour and loved the rigour of the game. “It was ‘Good morning!’ before we started and ‘How’s that!’ for the rest of the day,” he said of one hard-fought contest.

Once he was asked who was the best captain he had served under and he replied: “Well, any captain’s a good one if you’re winning.” After reflection he added that FSG. Calthorpe was the happiest captain he had known.

He loved thinking about the cricket, and in particular about the craft of wicketkeeping. In assessing Bert Oldfield and Dick Lilley as the greatest wicketkeepers who have ever played, he referred to an enthusiasm greater even than dedication. He was too modest to claim that attribute for himself, but others would claim it for him.

When Field-Marshal Slim spoke of the Birmingham spirit of resilience, adaptability and a cheerful refusal to lie down under difficulties, he had summed up Tiger Smith in a nutshell. The 17-year-old boy from Benacre Street who had lost the tip of two fingers in a works accident, and who asked the Edgbaston authorities for a job as a wicketkeeper, possessed these qualities in good measure. Which was why he played for England at the age of 25.