Tiger Pataudi overcame the disability of a damaged eye to become one of India’s most important captains. His Wisden obituary in 2012 remembered a remarkable figure.

Tiger Pataudi was an unlikely revolutionary. Raised in a palace, attended by servants, educated at Winchester and Oxford, and aristocratic in demeanour as well as by birth, the last Nawab of Pataudi might easily have been typecast as a gifted dilettante, useful only for bringing a whiff of the exotic to the staid world of 1960s international cricket.

Instead he became a hard-headed captain of India who, with a beguiling mixture of personal charm and tactical know-how, forced the team to abandon their deep-rooted factionalism and become a disciplined fighting unit. He was, quite simply, one of the most important figures in the history of Indian cricket.

Had fate not intervened, he might also have been regarded as one of his country’s finest batsmen, but an eye injury sustained in a car crash when he was 20 halted what seemed like inexorable progress towards greatness. Showing extraordinary resolve, he learned to cope with one properly functioning eye – and was still talented enough to score six Test centuries and become an outstanding cover fielder.

He assumed the Indian captaincy less than a year after his accident – at 21, Test cricket’s youngest leader at the time – but his suitability for the role was not questioned, and if results remained modest they were a clear improvement on what had gone before. Nor can his impact be assessed purely by statistics. His background bought him influence with selectors that his predecessors had not enjoyed: players were now picked on merit, not to satisfy some unwritten regional quota system. And they were made aware who they were representing. “He was the first captain to give us a feeling of Indian-ness,” said Bishan Bedi.

Pataudi was born in Bhopal, where his mother was the Nawab’s daughter, but grew up in the white-walled palace in Pataudi, a province around 40 miles south-west of Delhi ruled by his father, Iftikhar Ali Khan, the eighth Nawab of Pataudi. The family were waited on by more than 100 servants, eight assigned to the young heir. He inherited a love of cricket from his father: Pataudi senior had played three Tests for England before the war, making a century on his debut at Sydney on the Bodyline tour – during which he objected to Douglas Jardine’s tactics – then led his native country in three Tests against England in 1946.

He died while playing polo on his son’s 11th birthday, and soon afterwards the new Nawab was on his way to England to continue his education. On board ship he played deck games with Vinoo Mankad – en route to Haslingden in the Lancashire League – and the Three Ws and Sonny Ramadhin, returning from Australia. His early encounters with cricketing greatness continued when he arrived at Lockers Park prep school in Hertfordshire, where Frank Woolley was the coach.

Tiger – the nickname was bestowed by his parents for his love of crawling around – went to Winchester College in 1956, where his cricket master was Hubert Doggart, of Sussex and England. Doggart quickly realised he was dealing with a prodigy. “The only piece of advice I gave him in four years was to play straight at the start of his innings after he was once out early playing across the line,” he said. 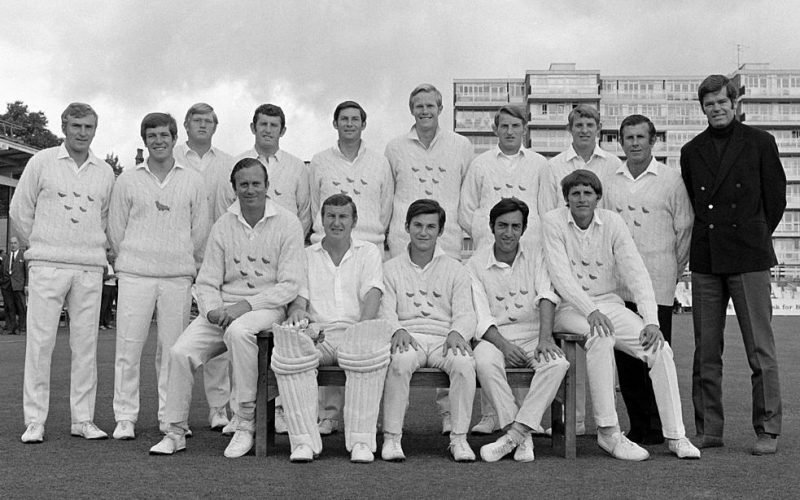 The Sussex county team of 1970. Tiger Pataudi is seated second from right

A ferocious cutter and hooker, Pataudi savaged school attacks and did not look out of place in more exalted company. He opted to join Sussex, and his Championship debut came at New Road in August 1957. He began with a first-innings duck, bowled by Jack Flavell. When the 16-year-old scored his first runs, Jim Parks was at the other end: “Flavell was steaming in, and bowled him a bouncer first ball. Tiger ducked but left his bat sticking up in the air. The ball hit it and went for four down to fine leg.”

Captain in his final year at Winchester in 1959, he scored 1,068 runs, surpassing Jardine’s record, set 40 years earlier. At Oxford, he emulated his father by scoring a century in his first Varsity match and, in 1961, after assuming the captaincy, was on course to eclipse Pataudi senior’s record of 1,307 runs in an Oxford season.

He had scored 1,216, including twin centuries against a Yorkshire attack led by Fred Trueman when, on July 1, his life changed forever. After the first day of the match against Sussex at Hove, Pataudi went out for a curry with his Indian-born team-mate Robin Waters, and was returning to the team hotel in Waters’s Mini Minor. As they approached the statue of Queen Victoria on Grand Avenue, a Humber Super Snipe – a much larger car – turned out of a side road.

Failing to spot the Mini, the Humber crunched into its passenger side, but onlookers concluded that Waters, who had been driving, was more seriously hurt. “I was pretty badly mangled so all the attention was on me,” he recalled. “Tiger was just taken out and leaned up against the statue. I remember reading the words ‘Empress of India’ in Latin on the base.” Pataudi had, in fact, suffered far more grievously, a shard of glass entering his right eye, causing irreparable damage.

The prognosis was gloomy, but medical opinion reckoned without the Nawab’s determination. He resolved to play again and, selected for the Board President’s XI against MCC at Hyderabad in November 1961, scored 70, half his runs coming while wearing a contact lens, the rest after taking it out. He found he saw two balls, but decided to hit the inner one. He soon settled on a method, pulling his cap down over his right eye to reduce the double vision and effecting a more open stance. Five months after the accident he made his Test debut, against England at Delhi; then, in the decisive fifth Test at the Corporation Stadium in Madras, he scored 103 as India secured a first series win over their opponents.

On the subsequent tour of the West Indies, he was called up to lead a side traumatised when Nari Contractor had his skull fractured by Charlie Griffith. “He commanded respect,” said Farokh Engineer, “because he was a prince and he held himself like royalty.” Pataudi set out to change the Indian mindset. “Before I joined the team the idea was to let the five days pass somehow without losing,” he said. Test victories were still rare – India won only nine of his 40 matches as captain – but he achieved a milestone in New Zealand in 1967/68 by leading his country to a first series triumph away from home.

His positive style of captaincy sought to banish India’s habitual inferiority complex. “We had been ruled by the whites for almost 200 years, then coming across them on the field, on level ground so to speak, made a lot of Indians a little hesitant,” he said. He set great store by fielding and, realising India’s lack of match-winning seamers, put the emphasis on spin. India usually picked three slow bowlers under Pataudi and, against England at Edgbaston in 1967, the fabled spin quartet – Bedi, Chandrasekhar, Prasanna and Venkataraghavan – appeared together for the one and only time. “Tiger sought advice and listened to the senior players, the sign of a good captain,” said Engineer.

His batting was understandably erratic but, every so often, he played an innings touched by genius. One came at Headingley in 1967, when he made a scintillating 148; even better was his 75 on a green pitch at Melbourne in 1967/68. Playing on one leg because of a hamstring strain and coming in at 25 for five, he launched a stunning counter-charge.

When he hit a rampaging Graham McKenzie back over his head, there were admiring words from Jack Fingleton and Lindsay Hassett. Ian Chappell was bemused that he had a different bat at the start of each session. “That evening, I asked Tiger why,” Chappell recalled. “He said, ‘I only brought a pair of boots, socks, creams and a shirt on tour, so I used someone else’s gear. Each time we went out after a break I just picked up the bat nearest the door.’”

“Robin, I have a feeling that over the years you have tortured yourself about the accident, but I have never ever blamed you for what happened”

Chappell was keen to know what he did for a living while not playing cricket and, after being uncertain of the implications of his first answer, pressed the point. An exasperated Pataudi snapped: “Ian, I’m a bloody prince.” Still hobbling, he made 85 in the second innings.

He continued to play for Sussex and became captain in 1966, but he was not suited to the demands of county cricket. “He was a very social man,” Jim Parks said. “You would turn up on the first morning of a Championship match and get a phone call to say he was in Paris.”

He lost the captaincy of India to Ajit Wadekar after a 3-1 home defeat by Australia in 1969/70 and so, after assiduously laying the foundations, missed out on the glory of the series victories in the West Indies and England in 1971. He returned against England in 1972/73 and had another series as captain against West Indies two years later, before retiring with 2,793 runs at 34.91 in 46 Tests.

Pataudi was stripped of the family title in 1971, when Indira Gandhi abolished the anachronistic privileges enjoyed by Indian royalty and aristocracy, but he did not lose an aura of glamour that had been enhanced by his 1969 marriage to Sharmila Tagore, one of Bollywood’s most glittering stars. He edited a sports magazine, was a TV summariser, dabbled in politics, and featured as the unnamed hero in a short story by his old Oxford friend Jeffrey Archer. In 2007, the Pataudi Trophy was inaugurated for series between England and India. Four years later, he presented it to Andrew Strauss at The Oval just a month before his death from lung disease.

On a later visit to Ireland, he was reunited with Robin Waters, who recalled: “He invited me to dinner at the team hotel and afterwards said, ‘Shall we go for a walk?’ We strolled out on to the beach and eventually sat Buddha-like under a tree. He looked at me and said: ‘Robin, I have a feeling that over the years you have tortured yourself about the accident, but I have never ever blamed you for what happened.’”