Like his twin brother Steve, Mark Waugh furthered his cricket education with a summer in England. After a brilliant first year with Essex, he was a Wisden Cricketer of the Year in 1991.

Australian cricket has two nurseries for its finest young players. One is in the verdant grounds of Adelaide’s glorious Oval, where the Australian Cricket Academy prepares a balanced squad of 14 teenage prospects every year. The other is 12,000 miles away, in a country small enough to slip into Australia’s back pocket, but where the opportunities for cricketers are big: England, of course, where the beer is warm, the climate cold and the Poms live.

Despite these drawbacks, Allan Border, Australia’s captain, knows the value to a young cricketers’s education of England cricket, with its diversity of players, pitches and pubs (for what would the game be without the bar-room analyst?). Border himself spent a few years enjoying all three with Essex, and his Australian team has benefited from the skills of such as Steve Waugh and Terry Alderman, both of them graduates of the County Championship.

But while Border may have a deep affection for Essex, there was also some self-interest in the telephone call he made to Lancashire late in the summer of 1988. An investment for the future, as it were. Border was soon to leave England for training camp Down Under, prior to Australia’s tour to Pakistan, and he was wondering if Mark Waugh would like to fill in at Essex for him for the rest of the season. Waugh, playing in Bolton League cricket, could hardly believe the conversation. You had to be either an established Test cricketer or a South African to get one of the plum jobs as an overseas professional at a county club. At 23, he was neither.

Waugh took the chance and did well. Well enough to be back in 1989 to watch with a mixture of anticipation and excitement as brother Steve, A.B. and his Australian mates conquered England in the Ashes series. It was becoming a formidable batting line-up to break into. Back home, however, he topped the Sheffield Shield averages with New South Wales and forced Steve out of the Australian one-day side. “One of us had to go, and brotherly love stops short when it comes to playing for your country.” Last summer he returned to Chelmsford to complete his education in readiness for the call-up to Test cricket.

He scored 2,072 first-class runs at an average of 76.74 which, even in a summer of indulgence for batsmen, showed him to be a performer of the highest calibre. He is the type who can have 30 on the board without the bowlers realising he has his pads strapped on. Undemonstrative, compact and still at the crease, he works the ball rather than crashing it about. And being a high-quality cricketer, he could supplement his batting with some useful medium-pace bowling and safe, adaptable fielding.

They played a total of 108 Tests together. What’s your favourite moment of the Waugh brothers? pic.twitter.com/AJnZZ8mvpu

Twice he improved on his highest score, first with 204 against Gloucestershire at Ilford and then with an unbeaten 207 against Yorkshire at Middlesbrough two months later. He also turned in career-best bowling figures of five for 37 against Northamptonshire late in the season and was voted Player of the Year by Essex supporters accustomed to fine batsmen from overseas.

What gave Waugh the greatest pleasure were his innings against the best bowlers in the world. His double-hundred against Gloucestershire came off an attack including Courtney Walsh; he scored 126 against Derbyshire and Ian Bishop, 125 against Hampshire and Malcolm Marshall, a one-day century against Lancashire and Wasim Akram, and 79 not out against Surrey’s Pakistan Test discovery, Waqar Younis.

“I’m confident I can handle it now,” he said, explaining the satisfaction those scores had given him. “You never know as you progress in cricket how you will cope with the next step up. I realise that facing one West Indian quick at Ilford or Colchester may be different from facing four in Kingston, but the whole season has helped my confidence. I’ve faced those guys and survived. I feel ready for the next step when – if – it comes.”

Mark Edward Waugh was born in the Sydney suburb of Canterbury on June 2, 1965 a few moments after Steve went out to bat first for Rodger and Beverley Waugh. Next in the order was Dean, now 22 and following in Mark’s footsteps in the Bolton League. At No.4 is Danny, a 16-year-old in Sydney grade cricket: his older brothers think he is the best yet. The four Waugh boys had little option but be good at sport in a country which thrives on the outdoor life, has the ideal climate, and supplies its youth with excellent and cheap facilities. 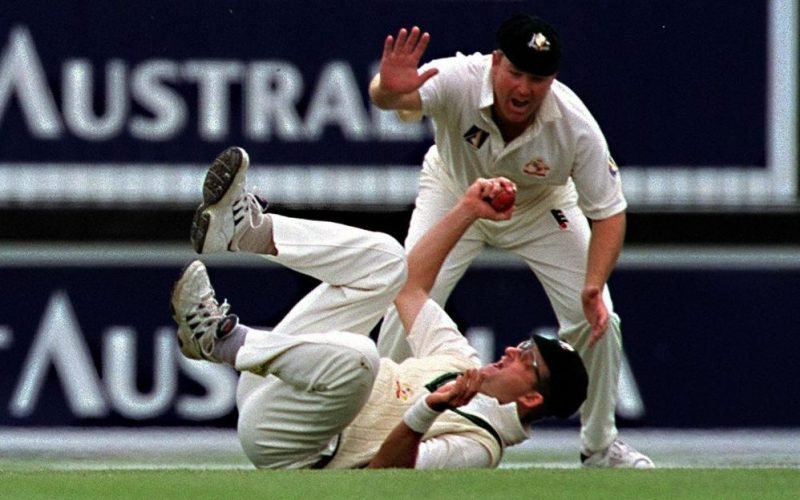 Apart from his stylish stroke-play, Mark Waugh was known for his sharp catching skills

They also descend from a lineage rich in ball skills. One grandfather played rugby league for New South Wales Country; father Rodger once beat Tony Roche to win the New South Wales under-14 tennis title, and a few years later he picked up a national doubles title; mother Bev was a highly regarded tennis player, winning state and national titles as a teenager and later becoming a leading squash player in the state.

The Waugh twins were naturally good at soccer, tennis and cricket. Mark was playing Sheffield Shield cricket by 20, a season later than Steve, but even then the brothers’ career were no longer running parallel. Already Steve was forging ahead into the Australian Test side, and after he had shown the benefits of county cricket at Somerset, Mark followed him to England to learn.

At Essex it did not take long for the dressing-room wit to devise a nickname for the newcomer: “Afghan”. Afghanistan, the forgotten war – simple when you know how. Relaxed and open, whereas Steve can be wary and cool, Mark soon found the company of Pringle, Hardie and Lilley as stimulating as the real ale he was being introduced to by a seriously social Essex side.

In this funny game, all cricketers have their little quirks, and Mark Waugh, for all his boy-net-door traits, has a ritual which is among the oddest ones in the game. Like a Battle of Britain fighter pilot who painted swastikas outside his cockpit for every enemy aircraft downed, Waugh draws little matchstick men on his thigh-pad for every century scored, with the name of the opponents below. Last summer another nine joined the ranks, and at that rate he may soon have enough for a little army.