Peter Loader couldn’t enjoy a long stint in Test cricket due to stiff competition, but continued to ply his trade at Surrey for a major part of the Fifties. He was named a Wisden Cricketer of the Year in 1958.

The initial P in the name of Peter James Loader might well represent perseverance, so prominent a part did this sterling quality play in his advance from club to county and Test match cricket. Last season he reached the peak of his achievements and earned fame by performing the hat-trick in the fourth Test match with the West Indies – a feat never previously accomplished by an England player in a home Test. In five successive years he helped substantially in the carrying off by Surrey of the County Championship. His pace, ability to make the ball move late in its flight, and his skill in disguising the occasional slower delivery placed him in the forefront of present-day fast bowlers.

Born at Wallington, Surrey, on October 25, 1929, Loader first displayed an interest in cricket around the age of seven when, at the local Grammar School, he engaged in the pick-up type of matches in which the majority of boys at small schools take part. Like most youngsters learning to bowl, he felt the irresistible urge for speed, and though receiving no coaching, developed sufficient skill over the years to be chosen to assist Beddington CC when 15. With this club he profited from the advice of GM (Gillie) Reay, the former Surrey amateur fast bowler, and at length attracted the attention of the county authorities. A game for Beddington with Surrey Club and Ground was followed by an invitation to assist the Club and Ground team.

Not until 1951 did the opportunity occur for him to play in a first-class match for the county, and then the absence of AV Bedser, on Test match duty, and WS Surridge, whose father had just died, provided it. In the two Kent innings in this game Loader, still an amateur, dismissed only three batsmen, and those at a cost of 96 runs; but he bowled well enough to impress his possibilities upon those in charge of affairs at The Oval, and the following year he accepted a position on the professional staff. Coaching by Andrew Sandham, and the ever-ready hints and help of Alec Bedser, brought a steady improvement in the young bowler. To begin with, Loader found his first team appearances limited, but he did a lot of capital work in the Minor Counties side. Still, in his first season in the paid ranks he appeared in six first-class matches and took 28 wickets, average 22.07.

In 1953 he took part in fifteen Championship fixtures, and his tally of wickets in all first-class engagements shot up to 80 at 18.28 runs each. Between July 8 and July 17 he enjoyed such a phenomenal spate of success that in three matches he took 34 wickets, average 7.97. At Birmingham he dismissed eight batsmen – seven of them bowled – in the first Warwickshire innings for 72 runs; he followed with 9-28 – the other man was run out – in Kent’s first innings at Blackheath; 8-21 v. Worcestershire at The Oval and 6- 70 on the opening day of the meeting with Gloucestershire at Bristol.

A visit to India during the winter with the Commonwealth team captained by BA Barnett, the former Australia wicket-keeper, helped to build up Loader’s somewhat slight physique, and in 1954 he disposed of 109 batsmen, average 14.57. That season he distinguished himself by taking 7-37 in the Gentlemen’s first innings at Lord’s, a feat which gained the special commendation of such celebrities as Sir Pelham Warner and CB Fry and paved the way to his selection by England for the last Test match with Pakistan. England lost that Test, so suffering their first reverse at home for three years, but this was by no means the fault of Loader. As proof of this, he was chosen by the Cricket Writers’ Club as the best young player of the year. Next winter he was a member of the MCC team which toured Australasia and though, with JB Statham and FH Tyson, the other fast bowlers, in such devastating form, he was not chosen for a Test, he did well enough in the other games, taking 41 wickets for less than 20 runs apiece.

Upon his return, he maintained that standard of excellence, securing 96 wickets, average 17.65, and when Tyson stood down through indisposition, deputising with success in the fourth Test with South Africa. A cracked bone in a leg caused him to withdraw from the MCC touring team to Pakistan at the season’s end, but the summer of 1956 brought him a greater measure of effectiveness, his wickets increasing to 124 and their cost falling to 15.69. Yet, with competition still so strong, he did not appear in any of the Tests with Australia. 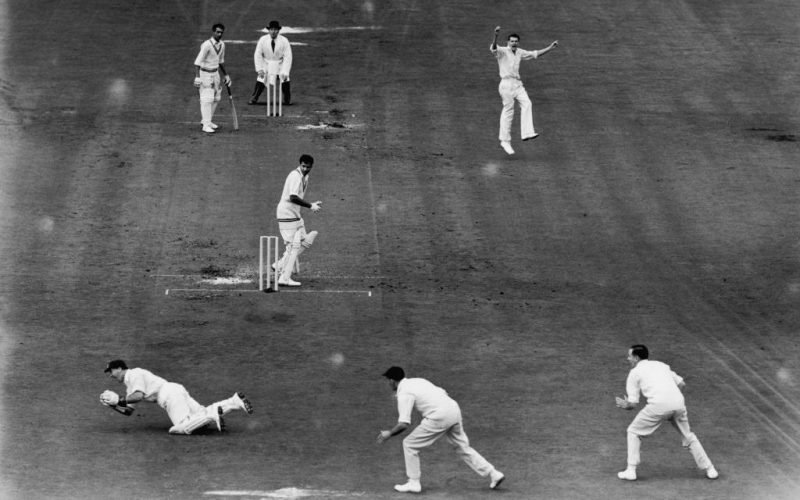 For England in South Africa the next winter, Loader took nine wickets in four Test matches for something over 32 runs each, but these figures did nothing like justice to his bowling, and last season he gave evidence of the fact by making his record 133 wickets at 15.47. On seven occasions he dismissed five or more men in an innings, but the feat which naturally afforded him the greatest satisfaction was his 6-36 in the first West Indies innings of the fourth Test at Leeds. He completed a rout of the touring team by disposing of JD Goddard, S Ramadhin and R Gilchrist with following balls. This performance assured his choice for the final Test, but with the pitch favouring spin-bowlers, he sent down only ten overs in the match for 14 runs and one wicket.

From an early age, Loader was troubled by asthma and he was deemed unfit for National Service; but happily this distressing complaint diminished with the passing years till, around the age of 21, it disappeared altogether. Now he can look forward to a long career and additional laurels. Besides his bowling, he is a keen, safe fieldsman in the deep. His batting methods are of the forthright type expected from No. 11.