Freddie Brown demonstrated his fine all-round skills in his teens and in 1932, earned a regular place in Surrey’s county eleven. He was named a Wisden Cricketer of the Year the following spring.

Frederick Richard Brown, was born at Lima, Peru, on December 16, 1910. As a schoolboy at Vina del Mar in Chile, he played a little cricket but it was after he came to England in 1921 and went to school at St. Pirans, Maidenhead, that he first took up the game in earnest. The late G Aubrey Faulkner was a master there and under his tuition Brown learnt how to bowl the googly.

Brown was at Leys School, Cambridge in 1925 and during that time came under the supervision of NJ Holloway, the old Cambridge fast bowler. Albert Iremonger was coach at the school and from both of these cricketers he imbibed much that was useful in batting.

So well did he progress that when he got into the XI in 1926 he headed the batting with an average of 32 and took 39 wickets for a little over 12 runs apiece. The next season he was again top in batting and came out second in bowling and in 1928, when captain, he stood second in batting and top in bowling, taking 59 wickets for less than thirteen runs each.

Captain again the next year, he proved the outstanding cricketer of the XI, being first both in batting and bowling. His batting average was over 65 and he obtained sixty wickets at a cost of less than twelve runs each.

Proceeding to Cambridge University with a brilliant school record, he had an unfortunate experience in the Freshmen’s Match, being dismissed without scoring in each innings and taking only two wickets. So pronounced were his abilities, however, that he got his Blue all right and while he did not do much as a bowler, he scored 42 and 29 in the University match and in the end headed the Cambridge batting averages.

Against Oxford in the following season he failed as a batsman, but bowled splendidly in the innings in which Pataudi made his record score of 238, getting five wickets for 153 runs in the first innings and two for eighteen in the second.

Having qualified by residence, he appeared for Surrey in four matches in 1931 but without much distinction. Last season, however, he became a regular member of the county eleven and, if at times his bowling did not meet with the success most people anticipated, he proved himself a fine forcing batsman.

Against Kent at Blackheath he played a masterly innings of 168 and later on scored 212 at the Oval and 135 at Lord’s against Middlesex, his hitting at the Oval being terrific. During the summer he was picked to go to Australia with the MCC team under DR Jardine, thus achieving the great ambition of every first-class cricketer.

It would be idle to pretend that Brown has fully realised the expectations formed of him when he was at Cambridge. For a bowler of his type – leg-break and googly – he is a little faster than the average. On his day he can be very good indeed but it is the considered opinion, particularly among the leading professionals, that they can usually detect his – to use a colloquialism – wrong-‘un. 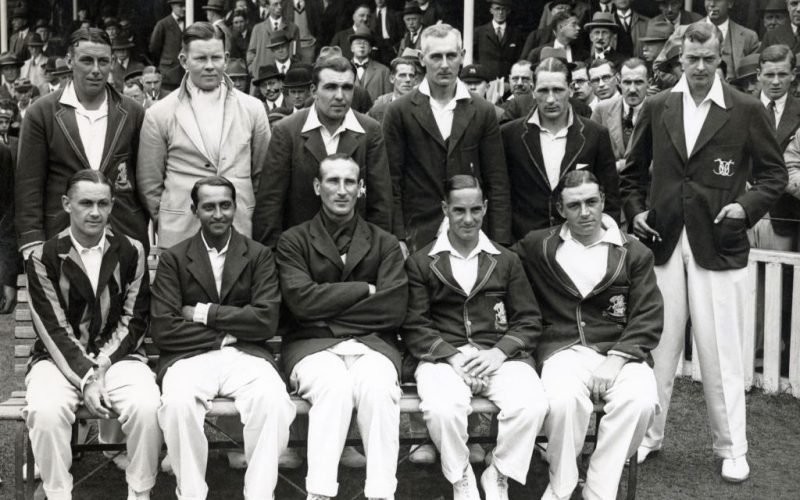 England team prior to the second Test against New Zealand at The Oval, 1931. Freddie Brown in standing second from left

That, however, is not the real defect in his bowling. Unfortunately his length is inconsistent. It is not so much that he sends down a bad ball occasionally, but he has periods when for overs at a time he bowls badly and proves very expensive. This criticism is not applied in any disparaging spirit but rather to explain how it happens that at times he is so freely hit. As I have already indicated, he is, when at his best, capable of going through the strongest batting side.

His batting – and he can hit as hard as almost anybody in the world – makes him a valuable member of any eleven and over and above all else, he fields brilliantly on the off side. He has one of the best returns of anybody now playing cricket.

In 1931, he played for England twice against New Zealand and last season he appeared in the Test Match against All India. As he is still young, he has plenty of time before him and one may almost with confidence express the opinion that the best has not yet been seen of him.

Freddie Brown scored 13,325 runs and picked up 1,221 wickets from 335 first-class games. He’s best remembered for his courageous and determined captaincy during England’s difficult run between 1949 and 1951, which included the 1-4 series lost in 1950/51 in Australia.