David Steele had a sensational start to his Test career in the summer of 1975. It earned him two great honours – BBC Sports Personality of the Year and Wisden Cricketer of the Year.

Few events in the heady summer of 1975 occasioned greater public delight than the part played by David Stanley Steele in rousing England from fast-fading faith to the dignity of a fighting force at least able to match Australia on equal terms.

Test cricket has not enjoyed such a romantic story for decades. In the space of three matches, and at the age of 33, after twelve seasons with Northamptonshire on the county circuit, Steele emerged as the much-needed national hero with the skill, nerve and character to stand up and offer fair fight to Lillee, Thomson and Co. His selection in the shake-up following the disaster at Edgbaston was inspired.

He applied a refreshingly new outlook, confidence and patriotism to a daunting task, and perfectly complemented the drive of the captain, Tony Greig. At the end of the series Greig said that Steele’s inclusion was the best thing that had happened to England – and none challenged the opinion as exaggerated praise.

Steele, born at Stoke-on-Trent on September 29, 1941, did more than accumulate 365 runs and bat almost without fault for 19 hours in six innings. He showed how a sensible technique, concentration and courage could be an effective shield to the brilliant aggression of Lillee, at least on English pitches. Here was a batsman, not in mourning for the recent past or overawed by occasions, but cocking a snook at bowlers who had carried all before them for so long.

Defeat was no longer the expected ritual, and at last England had a No.3 exuding defiance and dependability. His Test initiation was to take part in a stand of 96 with Greig after the first four wickets had gone for 49, all to Lillee. Long stands with either Greig or John Edrich became the expected bonus of every innings.

All cricket posed the understandable question: why had this clearly talented cricketer been ignored for so long? It is not easy to answer except that 1975 was statistically Steele’s second best season with 1,756 runs (including a century for Northamptonshire off the Australians), and an average of 48.77. And the selectors were reaching a state of near-desperation.

Overall, Steele, with the extra recommendation of a first-class catcher close to the wicket and a slow left-arm bowler, was a consistent rather than a spectacular performer.

He needed seven seasons from his arrival in 1963 to reach an average of 30 – partly because of the variable pitches of the period – and in the last six seasons his average has fluctuated from a modest 25 to 52 in 1972 when, not surprisingly, he thought his last chance of playing for England had disappeared. 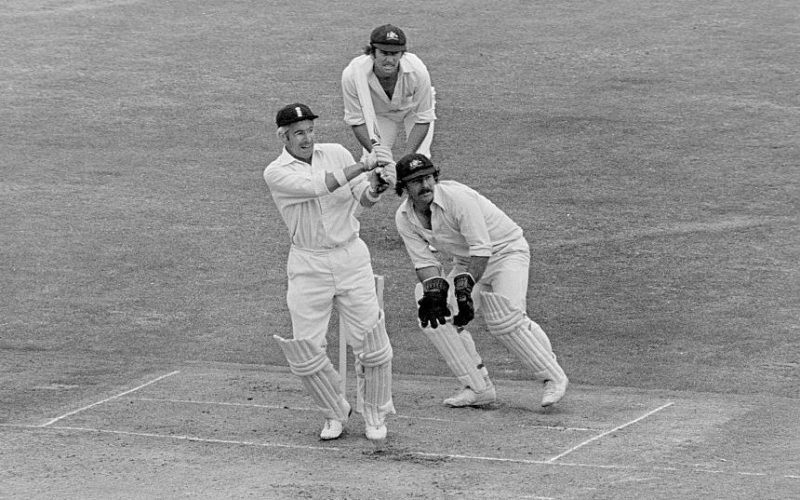 Perhaps unfairly he was branded as almost exclusively a front foot batsman. Steele protests that he is neither front nor back, but a close watcher of the ball which is then played strictly on its merits. What better technique can there be? What the selectors did not know until it was put to the test was his incredible temperament and superb response to a challenge.

Though cricket was not played at his school, the Enden Secondary Modern at Stoke, the game formed part of the life of his family, particularly on his mother’s side. His younger brother John is opening batsman for Leicestershire, and Brian Crump, for so long a stalwart with Northamptonshire, is his cousin – hence the gravitation from Staffordshire (1958 to 1962) to Northampton.

The greatest influence on his career was his uncle, Stan Crump, Brian’s father, a former Lancashire League professional in the Learie Constantine era. The young Steele grew up in a tough cricketing environment, graduating from 2nd XI and the Under-15 side at 14 to the Sneyd Colliery team, competing in the Staffordshire League, at 16. At that tender age he was both batsman and bowler for Staffordshire, and at 19, two years before moving to Northamptonshire, he was professional with Hartshill.

“I regard it as a tremendous privilege to play for my country. It makes you want to try until it hurts”

Always he was under the watchful eye of Uncle Stan. “He was hard,” Steele recalls. “He brought me up to play in a competitive spirit, and if you returned home after a bad day the whole family suffered with you. Cricket was always a way of life with us, and I have found that once you have the right approach it clings to you throughout your career.”

Coaching on the fundamentals were not restricted to the summer months. Uncle Stan dug out a pitch in his back garden, laid a concrete wicket, and times were known when snow had to be swept away before play could begin. And the right attitude to the game was always instilled into the young Steele and his cousin Brian.

The Staffordshire League, keen and competitive, proved the ideal training for the future county pros, particularly as the Sixties, with their many indifferent pitches, were anything but a help to inexperienced batsmen. Steele found the consistent bounce of Test wickets much to his liking and benefit.

Accustomed to the ball seaming on county surfaces, he quickly learned that Test pitches were better, and to succeed, he needed concentration. After a lifetime of training, he possessed that quality in abundance. Instead of inducing nerves the presence of big crowds and extra responsibilities uplifted him. In short he found that he had the priceless gift of a big-match temperament. Moreover, he has an almost old-fashioned urge to do his best for England.

Related Story: Geoffrey Boycott on England’s summer: The pitches need to change – it’s not a fair contest between bat and ball

“I regard it as a tremendous privilege to play for my country,” he pronounces with simple directness. “It makes you want to try until it hurts.”

Hard-headed common sense has always been one of his virtues. Before he tried his luck as a full-time county pro he completed a six-year apprenticeship as a printer. Now in the off-season he acts as a sales representative for Staples Printers (London), operating from his home at Kettering where he lives with his wife Carol, and baby son Arran.

Steele’s success not only served England nobly in a time of crisis – and with the prospect of better things to come – but was a triumph for the player who never gives up and would not demean himself by offering his second best.

David Steele enjoyed another successful summer against West Indies in 1976, but was then dropped by England and never called up again. He played in eight Tests, scoring 673 runs at 42.06.