Clarrie Grimmett was Australia’s key match-winner, alongside Bradman, during their 2-1 Ashes series win in England in 1930. He was named a Wisden Cricketer of the Year the following spring.

Clarence Victor Grimmett, the famous Australian slow bowler, was born on December 25, 1892, at Dunedin, New Zealand. Something of a wanderer until his real merit was appreciated by the South Australian Cricket Association, Grimmett first jumped into real fame by his performances against the MCC team under the captaincy of AER Gilligan in the winter of 1924/25.

Picked for the first time for Australia in the concluding Test match, he met with phenomenal success, taking in the two innings eleven wickets for 82 runs and having the biggest individual share in the defeat of England. Subsequently, when playing for South Australia, he dismissed seven of the Englishmen in the second innings for 85 runs.

From that time he never looked back, although on coming to England in 1926 his thirteen wickets in the five Test matches cost nearly 32 runs apiece. Against the next MCC side in Australia he obtained 23 wickets in Test matches but was again expensive, his average being over 44 runs per wicket. During the visit of that combination he met with more success than any of his colleagues in representative engagements but his bowling seemed to have lost much of its former terrors for our men.

When the last Australian team for England came to be picked it was obvious that in the absence of any other bowler of similar type – Mailey having given up the game – he was bound to be chosen and, as it happened, he shared with Bradman, the chief honours of the tour.

For a bowler of his attainments, he did little in the last Test match but at Nottingham, Lord’s and Leeds he accomplished very fine work indeed. The record of his achievements will be found in another part of the book, and it is sufficient to say here that at Nottingham he took ten wickets for 201 runs, at Lord’s eight for 272, and at Leeds – in which match he bowled probably better than in any other – six for 168.

Altogether in the five Test Matches he dismissed 29 England batsmen for just under 32 runs apiece, while in all first-class engagements he took a hundred and forty-four wickets for less than 17 runs each.

Grimmett, last season in England, was called upon for an immense amount of work and certainly during the first part of the summer, he was the one bowler upon whom the Australians had to rely for definitely consistent skill. The wonder was that he did not break down under the strain. Had he proved unequal to the heavy call it is fairly certain the Australians would have gone back without the Ashes.

He felt the effect of his labours in August when a bruised finger handicapped him considerably, and whereas he took one hundred and twenty wickets to the end of July he obtained only another twenty-four in the last eight engagements in which he played. Still, reviewing the season as a whole, the value of his bowling to his side was incalculable.

But for the remarkable batting performances of Bradman, in the glamour of which Grimmett’s effectiveness was apt to be overlooked, the South Australian would most likely have gone down to history as the outstanding success of the tour.

In style, Grimmett recalled memories of the days of the old round-arm bowlers but, owing to a pronounced bend over the left hip when he delivered the ball, his right arm was not so low as it appeared to be.

Like all first-class slow leg-breakers he did not make the ball turn too much. He bowled the googly with a clever, disguise of intention, and one of his most successful deliveries was the top-spinner with which he got so many men leg-before. Above everything else, however, he kept a practically perfect length. Only on rare occasions did he send down a loose ball. 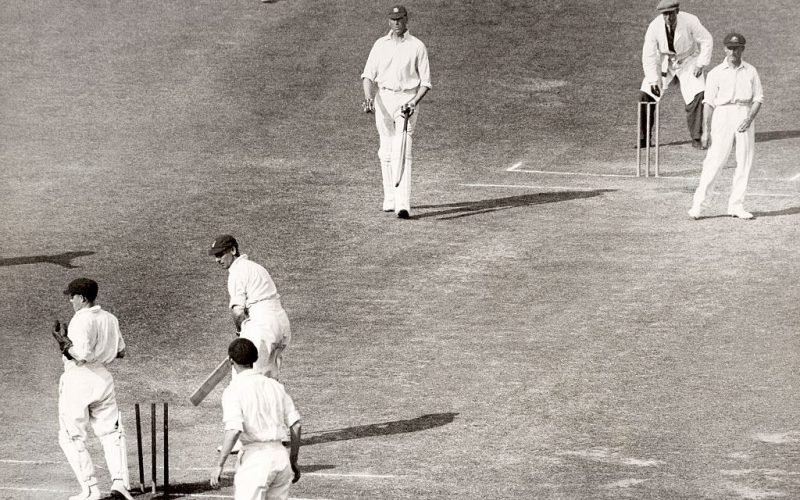 Jack Hobbs is cleaned up by Clarrie Grimmett at Lord’s, 1930

A pronounced feature of his attack could be seen in the skillful manner in which he lured a batsman by clever flighting without change of action. Nearly always when a hitter like Chapman went in, Grimmett would toss the ball in the air with a higher trajectory than usual.

Associated with three brothers of the name of Harris when he first played in a properly organised team for the Mount Cook Boys’ School, at Wellington, Grimmett learned from them how to spin the ball and one of his teachers – a Mr Hempelman – gave him much good advice but, generally speaking, he was as a youth a fast bowler.

The first time he bowled a leg-break in those early games he took a wicket but despite the fact that his teacher told him not to bowl fast any more he continued to do so and obtained seven wickets for three runs in a schools match for Wellington against Wairarapa.

Still Mr Hempelman persevered with him and some remarkable successes showed Grimmett conclusively the value of slow bowling. Joining Wellington East he found that club so strong that he did not get a chance in their first eleven and he nearly gave up the game but it was in one of the matches for this team that he first bowled the “bosie” – or, as we know it, the “googly”. Five of the Wellington Central wickets fell and Grimmett took them all.

"Reviewing the season as a whole, the value of his bowling to his side was incalculable"

After that he was picked for and represented Wellington Province for three seasons. When he had just turned twenty he went to Sydney where after playing for Leichardt and Paddington he joined the Sydney Districts Cricket Club. Ultimately he reached grade cricket and in his first match obtained twelve wickets for 55 runs, being only second to AJ Hopkins in the averages that season.

He left Sydney for Melbourne, playing for South Melbourne for three seasons and then joining Prahran. Just before this he appeared for Victoria against New South Wales at Sydney but failed to get a wicket. He did not play again for Victoria until the season 1923/24 when in the last match in the Sheffield Shield against South Australia at Adelaide, he took eight wickets for 86 runs in the second innings.

From Melbourne he journeyed on to Adelaide and in the opening Sheffield Shield match for South Australia against Victoria obtained nine wickets for 267 runs. In the inter-state games that season he dismissed twenty-eight men for rather more than 24 runs apiece.

During the Australian season of 1926/27 Grimmett did not accomplish much but a year later he met with pronounced success against New South Wales when he took eight wickets for 57 runs. In this game Bradman, making his first appearance in the Sheffield Shield competition, scored 118 and 33.