Neil McKenzie returned some major scores after his comeback to the South African Test side in 2008, with his match-saving hundred at Lord’s the major highlight of a glorious run. He was named a Wisden Cricketer of the Year the following spring.

In a year when the ability to shine in Twenty20 cricket was a passport to riches, Neil McKenzie’s match-saving century for South Africa at Lord’s was an anachronism. “I wouldn’t have liked to have to watch me batting,” he said, after an epic of concentration in which he defied England for 553 minutes and 138 runs. It may not have been pretty, but it was one of the crucial innings of the summer, saving South Africa after they followed on 346 behind with more than two days remaining. Victories in the next two Tests earned them their first series win in England post-apartheid, and only their third of all time.

For McKenzie, it marked a high point in a remarkable comeback after nearly four years out of the national team. Keeping his method simple and ignoring the temptation of risky strokes, he faced more balls (879) than anyone else in the series. His opening partnerships with Graeme Smith were the rock on which South Africa’s success was built: together, they protected from the new ball Hashim Amla, who was inexperienced in English conditions, and Jacques Kallis, who was out of touch. McKenzie allowed many deliveries to go past his stumps, but was strong on the pull, and elegant through the covers against balls too short or too full.

In his first incarnation, McKenzie was a capable but frustratingly inconsistent batsman. His image as a serious cricketer was not helped by idiosyncratic behaviour attracting almost as much attention as his strokeplay. He would tape his bat to the dressing-room ceiling, because he had once scored a century after his team-mates did it as a joke. He insisted all the toilet seats were down before he went out to bat. He stepped gingerly on the pitch, ensuring he didn’t place his foot on a white line. He made a ritual of getting into bed without making creases.

Gradually, McKenzie eliminated the more bizarre habits of his obsessive-compulsive disorder, reducing it to a routine in which he looks at square leg, fine leg and then the bowler running in. The monumental innings at Lord’s was accomplished through achieving small tasks. “Going out on Saturday night, it was about surviving to the close, and I was able to get off the mark. Then, on Sunday, it was batting out the first hour, then the second hour, and then session by session.”

The first stage of his international career ended when he was dropped, aged 28, after South Africa lost the Auckland Test in March 2004. He had scored a respectable if not wholly compelling 2,028 runs in 41 matches at 33.24.

McKenzie performed soundly enough for the Lions franchise, which he captained, to remain in the thoughts of the selectors. “I never gave up hope, but I could feel the window of opportunity was narrowing,” he says. There was no opportunity in his preferred role in the middle order, but he was picked to open in the Second Test against West Indies in January 2008, because of Herschelle Gibbs’s increasing frailty against the new ball. McKenzie made a solid 23 before a calf strain put him out of the series. But the selectors sent him to Bangladesh in February, where he made a career-best 226 at Chittagong and shared a Test-record opening partnership of 415 with Smith. Success against more formidable opposition followed in India, where he scored 94 and 155 not out in steamy Chennai and topped the series averages with 341 runs at 85.25.

Playing for Durham in the County Championship, ahead of South Africa’s England tour, he scored only 133 in eight innings, but it was a valuable experience. “When I got to Durham, the pitches were really wet and slow and I kept nicking off. But I learned to stand as still as possible. Not being the tallest guy, I have tended to get a big stride in, but I decided to cut out my bigger movements early on. It definitely helped in the Test series.”

McKenzie attributes his recent success to increased patience, facilitated by Smith’s ability to score quickly and dominate bowlers. No single coach has honed his technique. “I love the art of batting,” he says. “I like to watch other batsmen and see what they are doing, and I enjoy talking about batting.” Those he has talked to include his father Kevin – a fine batsman for Transvaal – Jimmy Cook, Gary Kirsten, Mark Boucher and coach Mickey Arthur.

McKenzie’s influence has been hailed by Arthur and Smith. “He has brought maturity, a level head and calmness into the dressing-room,” says Arthur. “He has a great work ethic and is very good at talking one-to-one with younger players.”

“He makes my life easier,” says Smith. “He’s a great senior player. He is also a role model for younger players, because of the way he fought for his place rather than chasing the pound with a Kolpak contract.” 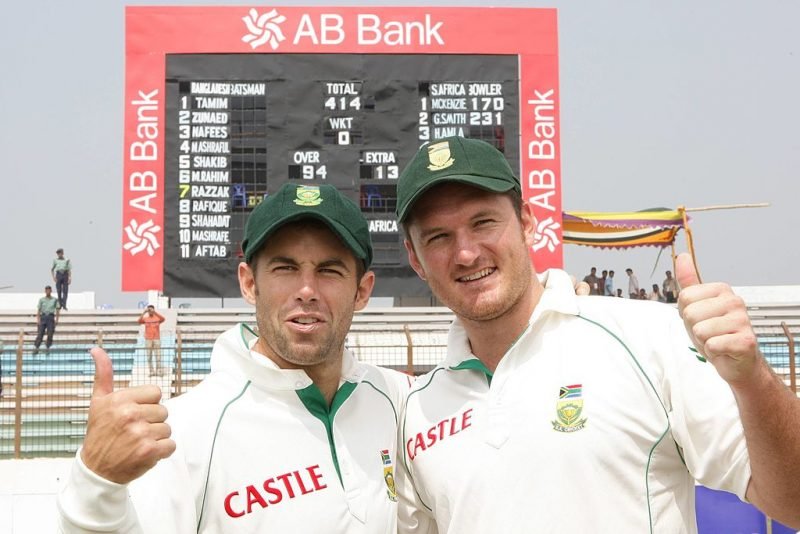 Neil McKenzie and Graeme Smith put on 415 against Bangladesh in Chittagong, 2008

Neil Douglas McKenzie was born in Johannesburg on November 24, 1975. Keen on cricket from an early age, he survived an accident in the family garage when he was about nine; his father’s foot slipped from the brake to the accelerator, the car lurched forward and Neil was trapped against a work bench, suffering a broken leg and a crushed right knee, which he still cannot straighten properly.

Attending King Edward VII School, McKenzie followed his father by playing for Transvaal and South African Schools. He captained the national schools team and made his first-class debut for Transvaal B in early 1995. The same year, he led a South African Under-19 team to England, which included Boucher, Makhaya Ntini and Ashwell Prince.

His Test debut in Sri Lanka in July 2000 was as an emergency opener, but he was soon back in the middle order. In a badly beaten team, McKenzie batted competently against the Australians, away and at home, in 2001/02: at Newlands, he was run out for 99 by a direct hit. In England in 2003, he was not selected for the first two Tests, but a masterly 90 in difficult conditions in Nottingham seemed to have secured a long-term place. He continued, though, to be the nearly man. “I hadn’t done badly, but I hadn’t done well either. That 90 was followed by a few low scores.”

After his experiences of cricket’s lows, success has not gone to his head. “I’m happy with the way things have gone, but I’m still cautious. You’ve got to respect the game and the position [as opener].” And, if Neil might not have enjoyed watching himself at Lord’s, there was a clan of McKenzies who watched every agonising minute with increasing pride, including father Kevin, wife Kerry and five-month-old son Luke.