Alan Davidson, one of Australia’s greatest all-rounders, turns 90 on June 14. When he was a Cricketer of the Year in 1962, Wisden asked his captain, Richie Benaud, to write the profile.

When a cricketer can make fifty runs in a Test match he immediately becomes a valuable commodity to his side. When he has the ability to add to that five wickets and a brace of catches he is beyond price to his associates and skipper. Such a cricketer is Alan Davidson, born on June 14, 1929, of cricket loving parents at Lisarow on the Central North Coast of New South Wales, and latterly one of the great all-rounders in the history of the game.

Davidson is a dynamic cricketer: a superb left-hander with both bat and ball. Many of his exploits are legendary among his fellow modern-day players. New Zealand tourists tell of the match at Wairapa where he took all ten wickets for 29 and then made a brilliant 160 not out to complete the day. The following game he relaxed by merely throwing out a scuttling batsman from the boundary with one stump at which to aim.

Who could care for statistics where there is concerned a player of the calibre of Davidson?

“Davo” played most of his early cricket in the Gosford district of New South Wales. There he was part of what was almost a family team with Davidsons and Cliftons putting a well-nigh unbeatable side into the field. A completely natural cricketer, he soon became a star player at Gosford High School and represented Northern High Schools for three successive years, vying with his present Test captain, Richie Benaud, who played for City High Schools.

In those far off days fast bowling was far from his mind. He was one of the unorthodox Fleetwood-Smith variety that seem to appear regularly in Australia. Not until the year after leaving school did he turn to fast-medium bowling, and with such success that he was selected the following season, 1949/50, for the State side.

With the Australian team in South Africa there were many opportunities for young players; the more so with a second eleven to be selected later in the year for a tour of New Zealand. Davidson grasped every one of them.

He had a good match for NSW Colts against Queensland Colts and then bowled a future Test opener, George Thomas, first ball when he appeared against the Victorian Second Eleven. A week later, with his second ball in first-class cricket, he trapped the South Australian opener, Bob McLean, lbw, and, with consistent batting and bowling allied at times to almost unbelievable fielding, forced his way later in the season into the earlier mentioned side for New Zealand.

Four years later, he stepped on to the Trent Bridge ground at Nottingham to play for Australia in his first official Test match. 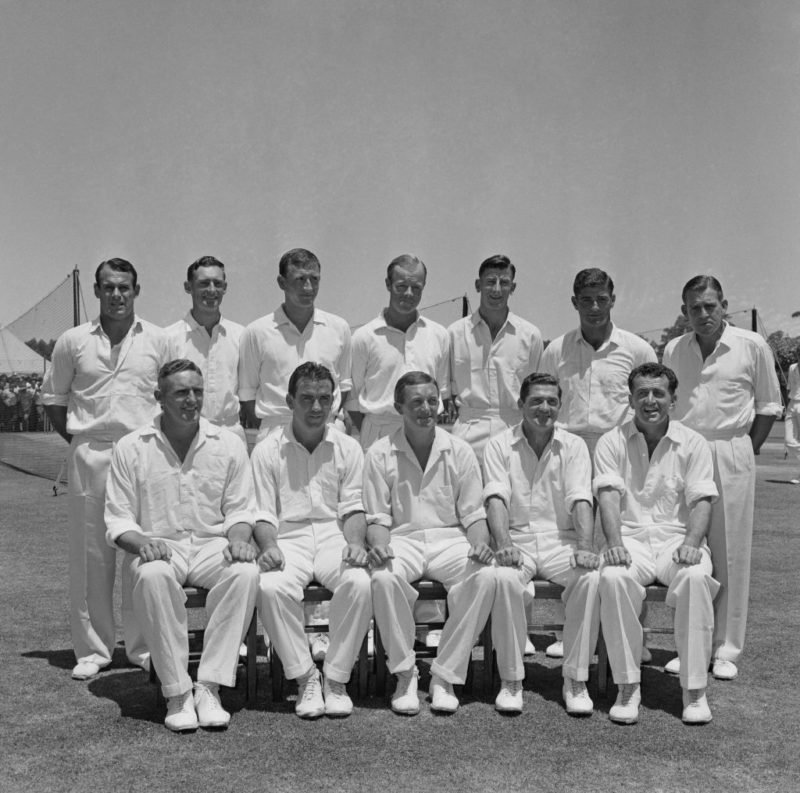 The Australia national cricket team, in 193 including both Richie Benaud and Alan Davidson

This, then, is the brief chronological account of a gifted cricketer, but who could care for statistics where there is concerned a player of the calibre of Davidson?

Team-mates and spectators prefer to recall some of his paralysing bursts with the new ball for Australia and the sight of his batting in full cry, preferably to some slow bowler. “When you see that big right foot coming down the wicket, brother, you duck,” is an accurate and revealing recommendation given by an Australian bowler one day when asked how he felt about the carving just administered by the burly New South Welshman.

Like ten other Australians, one of his greatest moments in Test cricket was when he bowled Brian Statham to win the Ashes at Manchester in that fantastic Test of 1961. And rightly so, for without Davidson’s magnificent 77 that day, Australians may well have been drinking their champagne from paper cups a couple of hours before the scheduled finishing time. 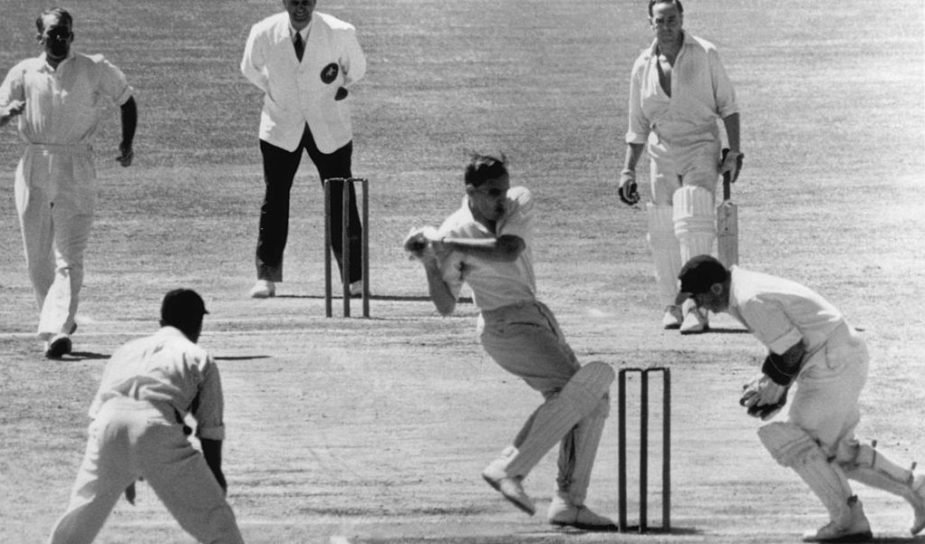 That day the big right foot was well in evidence. Placed close to the line of the ball and with bat swinging majestically alongside it, he belted David Allen out of the attack – and Allen had just placed MacKay, Benaud and Grout in the pavilion for a paltry number of runs. One of the sixes which assisted a 21-run over flashed above cover’s head; the next crashed against the brickwork alongside the railway line.

Every bit of 6ft and 14st went into those shots in the same way it has gone into all that Davidson has done over the years for Australia. Over one thousand runs, 162 wickets and nearly fifty close-to-the-wicket catches in Test matches give some idea why Australian players are prepared to argue about some of the old time greats as compared with this player. The beauty of an almost perfect fast-medium action with a disconcerting late swing has caused untold worry to opening batsmen the world over.

Peter Richardson, Watson and Graveney will long recall the day he took three wickets for one run in a sensational over in the second Test at Melbourne in 1958/59 – just as vividly others will remember a burst with the second new ball at Pietermaritzburg in 1957/58 when he whipped three Natal batsmen back to the pavilion in one over for no runs, among them Test player, Roy McLean.

Thirty-nine Test matches for his country have brought the left-hander to the top of the cricketing tree, though for many of those he was playing in the shadow of the great Australian pair, Miller and Lindwall. It was not until these players were out of the side that Davidson came into his own.

In South Africa in 1957/58 he left batsmen foundering and critics advising as he savoured the delights of the new ball for the first time as an Australian bowler. England, in 1958/59; India and Pakistan, in 1960; and the West Indies, 1960/61, all felt the lash of his talents.

Indeed, one of his greatest performances was to take 33 wickets against the Caribbean visitors at a cost of 18 runs apiece when the next best average was 33 per wicket and five of the West Indians scored over 350 in the Test matches.

Related Story: Players with the most Test appearances: Cricketers with more than 100 matches

Davidson has announced that he will not tour again with an Australian side, but with his fitness restored and some sterling performances against his name in the 1961/62 Sheffield Shield season, Australians are looking to him for a great season against England later this year and justifiably so; for he has never let them down yet.