Frank ‘Typhoon’ Tyson became a national hero for his performances in England’s 1954/55 Ashes triumph. After a rather quieter summer in 1955, he was named a Wisden Cricketer of the Year.

Not for a long time has a star burst upon the cricket firmament with such startling suddenness as has been the case with Frank Holmes Tyson, the Northamptonshire and England fast bowler.

Born at Farnworth, Bolton, on June 6, 1930, Tyson played his first cricket on the rough backs near his home at about the age of four, progressing to school cricket of a more serious nature some six years later. Even in those early days he cherished the idea of becoming a fast bowler of class without realising the fame which was eventually to come, and, benefiting from the help of Alf Cassley, a former Middleton CC professional, he did well enough to gain a place in the Middleton 2nd XI when 14. After a year at Fleetwood Grammar School, he moved to Middleton Queen Elizabeth Grammar School, where he stayed till 18, captaining first the under-14 team and later the first XI.

By the time Tyson was 16 he appeared in the Middleton first team and though, in his first match, he took four cheap Royton wickets, he achieved nothing spectacular afterwards. In 1947, upon the recommendation of one of the two brothers Kay who played for Middleton, he went for a trial at Old Trafford, playing for Manchester Schoolboys and in the early county trials of 1948. By now 17, he was sitting for his higher school certificate and looking for a place at a University.

In 1948, he was called up for the Army, in whose representative matches he appeared without special distinction. When his National Service ended in 1950, Lancashire’s interest in him had evaporated, particularly as he was suffering from a strained back muscle. He therefore approached Northamptonshire with more encouraging results and commenced qualification by residence.

Meanwhile Tyson began studying at Durham University for the BA degree which, at the second attempt, he gained soon after the end of last summer. In 1950 he turned out again for Middleton and the following season, by taking close upon 100 wickets, he helped Knypersley to carry off the North Staffordshire League Second Division Championship. At length, in 1952, he made his first-class debut, against the Indian touring team. In his first over he took a wicket, that of Pankaj Roy, and though that was the extent of his success, his 21 overs cost only 47 runs.

By this time he was acknowledged as the fastest modern bowler if not of all time, a view to which F.R. Brown, the Northamptonshire captain, fully subscribed. Next year he led Durham University to the Universities Athletic Union Championship and at the same time made 12 appearances in County Championship matches for Northamptonshire. Bowling with a run of 17 measured paces, he dismissed 26 men at an average cost of 25.80. Though he took four wickets for 26 against Derbyshire and four for 59 against Surrey, the performance which earned most distinction was that for his county in the match with the Australians.

When the touring team were sent in to bat at Northampton, Tyson inflicted a shock upon them by disposing of C.C. McDonald and G.B. Hole with the second and fourth deliveries of his opening over, and though he took no other wickets he established himself in the public eye. In the winter which followed he put in a spell of tree-felling to improve his physique and Northamptonshire sent him to the London indoor cricket school run by Alf Gover, the former Surrey and England fast bowler. 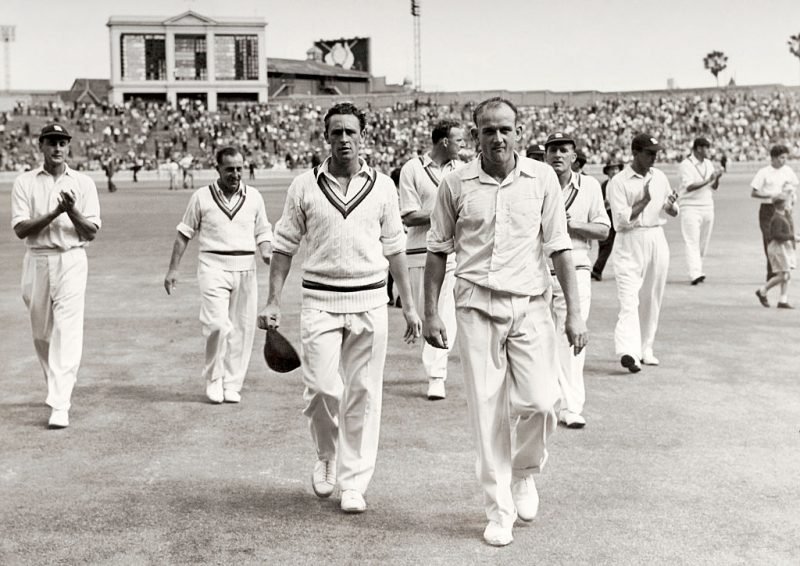 Tyson (right) leads England off the field after victory is secured over the Australians in Sydney, December 22, 1954

Here began a great improvement. Gover says he did not alter Tyson’s style, but he eradicated certain faults. For instance, Tyson used to drag the outside of his right foot as the right arm came up to deliver the ball, causing his left side to turn towards cover point so that at the moment of release his right side pointed towards the batsman. The result of this was that he was almost solely an arm bowler. In order that he should use his body as well, he was persuaded to take up his left arm later and to drag on the inside of his right foot.

Next summer Tyson established himself as a regular member of the county team; he increased his wickets to 78, reduced their cost to 21.38 and also showed improvement as a batsman. That year, too, began his notable partnership as opening bowler for England with Statham, of Lancashire, for Tyson was chosen to play in the final Test match with Pakistan in which he distinguished himself by taking four wickets for 35 runs in the first innings. Four times in county engagements he disposed of five batsmen in an innings. Even so his choice as a member of the MCC team to tour Australia during the winter came as something of a surprise.

In the first Test match in Australia, Tyson took only one wicket and that at a cost of 160 runs, and it looked as though the selectors had made a mistake in choosing him. Then he shortened his run by three or four yards with remarkable results. In the second Test at Sydney he took four wickets for 45 and six for 85, and in the third at Melbourne achieved his best performance by dismissing seven men for 27 runs in the second innings.

His place in the England side was thus assured, and, including the two matches with New Zealand, his Test record for the tour read: 39 wickets, average 17.25. Such was his pace that Australian journalists gave him the pseudonym of Typhoon Tyson. Towards the end of the tour he developed foot trouble which limited his cricket last summer and kept him out of all but the first and third Test matches with South Africa. In these, however, he again showed himself a telling force, particularly in the opening game of the series at Trent Bridge. Here, in taking six wickets for 28 runs in the second innings, he brought about the dismissal of South Africa for 201 and paved the way to victory in an innings with five runs to spare.

Essentially a quiet and modest man, whose thinning hair makes him look older than his 25 years, Tyson owes his triumphs to perseverance. Whether in League cricket or when playing in the Army he went on learning all the time. He discovered that fast bowling was a question not so much of strength as of rhythm. When finding himself engaged in three-day matches, he considered a longer run would help to conserve energy; yet in Australia he owed his success to the fact that he returned to the methods he employed earlier in his career. The career of a fast bowler is often notoriously short. Hence Tyson’s concentration upon studies, for he always wanted to become a teacher.

Wisden was right to be concerned about Tyson’s longevity. He played just 17 Tests, taking 76 wickets at 18.56.