Graeme Hick was already being spoken of in awed tones when he was named as a Wisden Cricketer of the Year in 1987.

At any one time there are perhaps half-a-dozen cricketers in England who inspire people to say: “Ah, I think I’ll go to that match tomorrow just to watch him play.” Usually, such a compelling player is a batsman, such as David Gower or Viv Richards or Martin Crowe. In 1986, the name of Graeme Ashley Hick was added to that elite list of cricketers who actively excite followers of the game.

Nineteen years of age at the season’s start, Hick was the first to make 1,000 first-class runs. A tall, broad, white-hatted wielder of a Duncan Fearnley blade, like Crowe, he went on to become one of two to score 2,000 runs, and thereby claimed another title: that of being, at 20, the youngest batsman to reach this figure in an English season. Len Hutton was 21 when he did so in 1937. It is hard to think there have been many better players at his age than Graeme Hick.

From the start he has been a prodigy. Born on May 23, 1966 in Harare, Zimbabwe, or Salisbury, Rhodesia, as the capital then was, Hick was six years and eight months old when he made his first century, with his own bat and without a box as he remembers. His 105 not out was scored against Mangula Junior School, and it contained 24 fours, the ball travelling quickly over a hard bush ground short of grass.

His father, John Hick, had twice represented the district of Mashonaland as a middle-order batsman; he had already taken his son into Salisbury to watch Graeme Pollock bat in Currie Cup matches. But the schoolboy Hick, able at tennis, athletics and hockey (he came to play for the national schools team), did not give particular attention to cricket at first. He simply bowled his high, turning off-breaks for Banket Junior School in 1975 – and took 115 wickets for 347 runs, at an average of 3.02 each!

As an opening batsman he had made no more than half-a-dozen hundreds by 1979, when he dropped to No.3 in the Prince Edward High School Under-14 team and served notice of his exceptional talent. That year he acquired the habit of making large, undefeated centuries, and averaged 185 for his school.

The following year, 1980, when living at the family home on the Trelawney tobacco-farming estate, he was found to have meningitis in its milder form. The delay was considerable, but the path already established. For the rest of his schooldays Hick ascended through the various grades: from the national Junior Schools team (of which he was captain), to the Fawns, to the Senior Schools side. So rapid was the progress that at 17, while still at school, Hick was selected as a member of the Zimbabwe World Cup party of 1983 – the youngest player to have been selected for that country, or for a World Cup tournament. 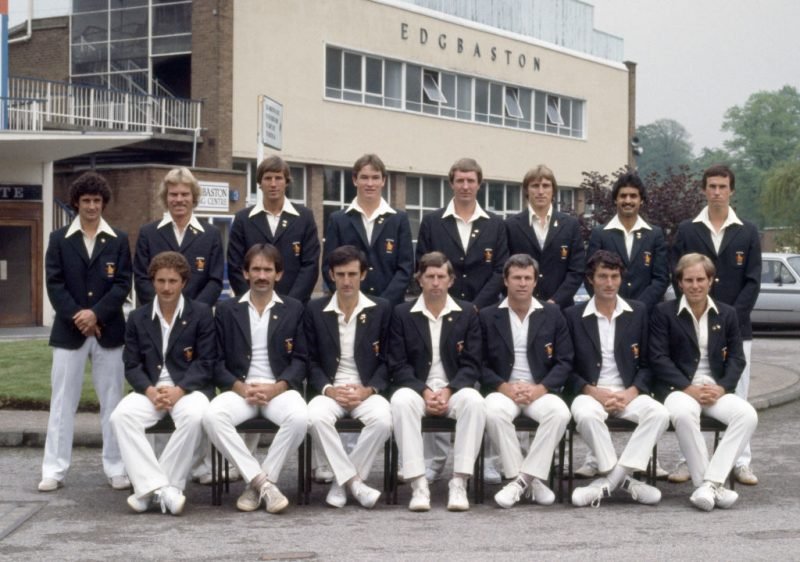 The 1983 Zimbabwe World Cup squad. Graeme Hick is fourth from left in the back row

In 1984 he went to Worcestershire on a Zimbabwe Cricket Union scholarship: at the season’s end he was allowed a Championship debut against Surrey and had made 82 when time expired. In 1985, for Worcestershire and the touring Zimbabweans, he scored 1,265 runs at 52.70. His county, needless to say, were happy to preside over the growth of an extraordinary skill.

They were especially impressed by the hungry way in which Hick approached his batting, often reaching the crease before the dismissed batsman had dragged himself from the field; by the orthodoxy and straightness of his style, tainted only by the steer through gully that has been forced upon so many by one-day cricket; by his strength, which he has developed through weightlifting and is the strength of an amiable giant; by his pursuit of excellence, which somehow seems more attainable for a colonial than for someone bred in England; and by his method against short-pitched bowling. Hick pulls along the ground in front of square leg if he plays a shot – no top-edged hooking down to fine leg.

He began last season in fine form, having rewritten a few records at home during the winter. Ireland, touring Zimbabwe, had complained that they were not meeting good enough cricketers, and Hick was called in from his coaching duties around the schools. In a one-day game against Ireland he hit 155 not out (nine sixes, 13 fours) in 116 minutes. The next day, a three-day match began against them and Hick was 112 not out overnight. The following day he went on to 309 in less than seven hours (the next highest score was 58). His was the highest ever innings for Zimbabwe, or Rhodesia, or against Ireland.

Back with Worcestershire, centuries flowed like the Severn: two came in the Benson and Hedges Cup, bringing Gold Awards, and six in the Championship. He considered the double-century at Neath was the most enjoyable, the best being the one against Gloucestershire on an uneven wicket at Worcester, when he took some bruises from Courtney Walsh and David Lawrence. Essex were the only other county to choose a batsman regularly as their one overseas player. Neither should Hick’s capacious handed slip-catching be forgotten, nor the potential of those off-breaks.

By the end of the season the question centred not on whether Hick was a great batsman in the making but on which country he would represent. Not Zimbabwe: reluctantly, yet understandably, Hick decided to sever the link with his native land in order to prove himself in Test cricket. New Zealand have sounded him out, offering a four-year qualification period. He was told that he could play for England only in 1991, after ten year’s residence. By then many more runs will surely have flowed beneath the bridge besides New Road.

While Graeme Hick’s potential was never properly realised in Test cricket, he was a giant of the county game. In all he scored 41,112 first-class runs at 52.23 with 136 centuries.