Tamim Iqbal had a big impression on English crowds with his performances on Bangladesh’s 2010 tour. The following spring, he was named a Wisden Cricketer of the Year.

In his first Test innings at Lord’s Tamim Iqbal was run out for 55. Stepping into the dressing-room, he asked the attendant, “Why is the honours board reserved for centurions? There should be one for fifties as well.” “You will need a century to get your name on this,” the attendant replied. And Tamim said, “OK, I’m not leaving here without a century,” even though he was only 21 years old and on his first tour of England – in early season at that.

In the second innings Tamim made 103, the first century by a Bangladeshi at Lord’s, with 15 fours and two sixes. The hundred came up from just 94 balls, the fastest on the hallowed turf since Mohammad Azharuddin’s in 88 balls in 1990. And in no way was Tamim’s celebration less spectacular than his strokeful innings. After hitting Tim Bresnan for four, four, two and four from successive balls to race from 87 to a century, he ran towards the dressing-room and leapt up. Pointing to the imagined name on his shirt, he gesticulated as if to say “now put down my name”. 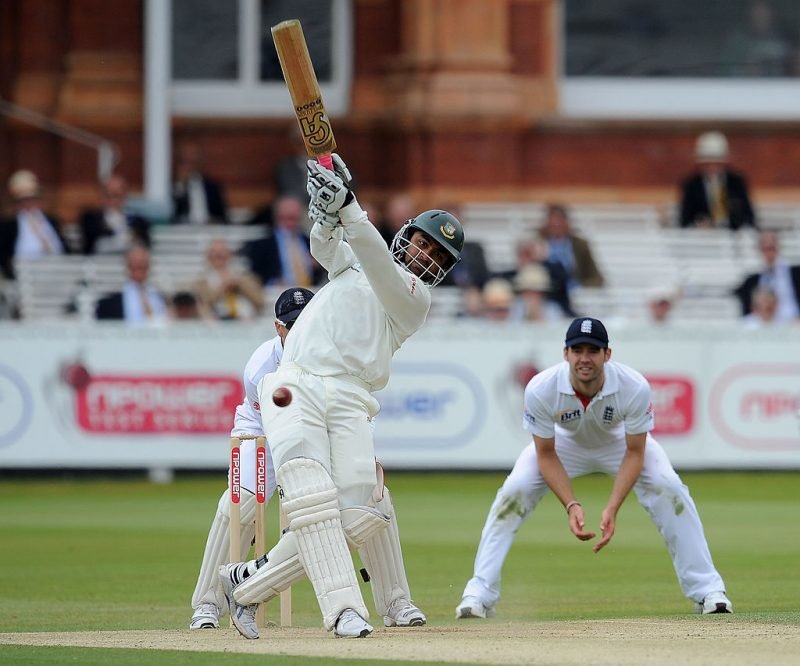 Old Trafford was next to be lit up by the glory of Tamim’s bat. He scored another hundred, which took six balls longer, but Tamim rates it higher: “The Lord’s century was far more emotional… it was Lord’s, after all. But I batted much better at Old Trafford – the challenge was bigger. After getting out trying to pull a bouncer at Lord’s, I realised that they would unleash a flurry of bouncers in the next two innings – and that’s exactly what happened. But I’ve never batted with as much determination as I did that day. I told myself, I’m not leaving here even if I die. I forced them to change their bowling plans. That was also a big victory.”

Through that innings, and especially after it, there was one person on Tamim’s mind – Kevin Pietersen, who was present on the field. “When I was hitting the ball all over the park during the Chittagong Test, KP told me ‘It’s easy to hit here, but come to Old Trafford and see the fun.’ I didn’t realise what he was saying. I knew there was a Test at Lord’s, but didn’t know there was one at Old Trafford too. Later, only after I asked my team-mates, I came to know that Old Trafford is the fastest wicket in England and the ball really swings there.”

“When I was hitting the ball all over the park during the Chittagong Test, KP told me ‘It’s easy to hit here, but come to Old Trafford and see the fun’"

English cricket – or rather an English cricketer – played a role in Tamim’s batting during the Lord’s Test, too. He saw Geoffrey Boycott on TV discussing Bangladesh’s right, or lack of it, to Test status, and his words stung Tamim. “Boycott was a great player – it’s people like him who should be encouraging us to perform better. I was sitting alone in my room, watching TV, and I can’t tell you how bad I felt. Honestly, I had a very troubled sleep that night. If you start a chocolate company, you can’t compete with Cadbury in the first ten years. The next day, after scoring the century, I thought to myself, ‘Thank goodness, at least I didn’t have to say it out in words.’”

It wasn’t only the words of Boycott that made the Lord’s century memorable for Tamim, it was the connection with his late father. “The Lord’s century was special because of my father – he was mad about cricket, in fact he was a keen student of cricket history. Whenever they showed Lord’s on TV, he would always tell us, ‘Look, this is where the game began.’ That’s why I really missed him after that Lord’s century.”

Tamim’s father died in 2000, but his favourite son believes his father watches his every deed on the cricket field from the world beyond. That is his constant inspiration. “I love cricket, but however much I want to succeed for myself, I want to succeed much, much more for my father’s sake. You can say I play the game to fulfil his dreams.”

Tamim Iqbal Khan was born in Chittagong on March 20, 1989, into a family obsessed with cricket, and grew up with it. So organic is cricket to his life that he cannot remember the first time he picked up a bat. His father was a football coach by trade but a cricketer by passion. So was the rest of his sprawling extended family – especially his uncles, one of whom, Akram Khan, captained Bangladesh and played a large role in leading his country to victory in the 1997 ICC Trophy and securing a place in cricket’s top tier.

The joy of qualifying for the World Cup, as a result of that ICC Trophy win, spread right across the country. In Chittagong, the epicentre of the celebrations was Akram Khan’s – and Tamim’s – home. “I’ll never forget that time. Thousands of people visited our house day and night, there was colour and festivity everywhere. You may not believe me but our rooms were under two feet of coloured water. My dreams took wings then – I would also be a major cricketer one day, people would sing and dance in my honour as well.” 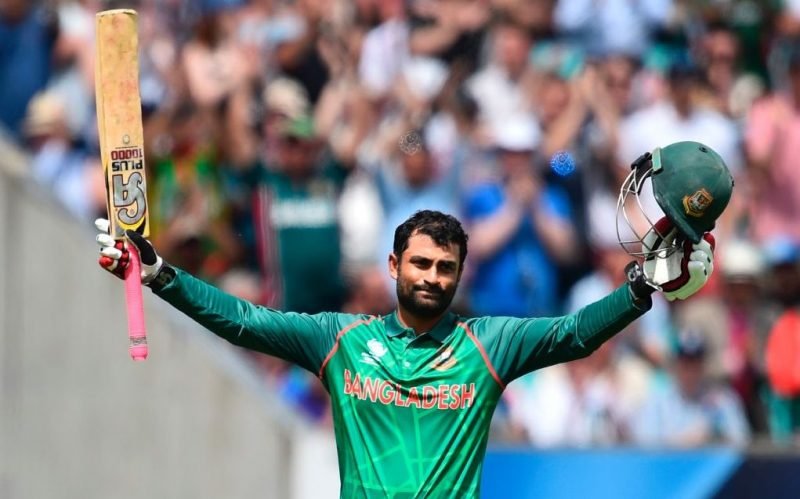 Tamim Iqbal is the leading run-scorer for Bangladesh across formats

More than the pursuit of that dream, it was the sheer joy of playing cricket that took over Tamim’s life. The long narrow lane leading to his house was the venue of cricket matches morning and evening; it was here, in an arena where hitting high meant the risk of losing the ball and getting out, that he learned to hit straight. Almost unknowingly he had mastered the first art of batting.

A stone’s throw from Tamim’s house lies the M.A. Aziz Stadium, Chittagong’s first Test ground. The graduation from the lane near his house to the Outer Stadium – as the periphery was known – took a matter of days. “I would wake up early in the morning to grab the best pitch and set up stumps. I used to be so excited I couldn’t sleep at night – I would wonder, what if it rains? From two or three in the morning I would look out at the sky – someone had told me that if I could see the stars there’d be no rain.”

Matches were played on the roof of the house as well, even at night. Recognising the boy’s obsession with cricket, Tamim’s father rigged up nets and lights. The son still recalls the intensity of the competition with the neighbours over their imagined ‘Ashes’.

His brother Nafis Iqbal – four years older, and also a Bangladesh opener – is inextricably linked to Tamim’s earliest cricket memories. The World Cup on the subcontinent in 1996 obviously affected Bangladesh – and none more so than the Khan family of Chittagong. “My father and uncles would watch all the matches on TV together. One day, before a match, bhaiyya [Nafis] told me, ‘Sri Lanka are playing today, they have a player who hits really hard.’ That was the first time I watched a match with full concentration, and I became a diehard fan of Sanath Jayasuriya.”

The realisation that international cricket was no walk in the park also came via Sri Lanka. After destroying India in the 2007 World Cup in the West Indies – his first match on the biggest stage – Tamim forgot all his strokeplay while touring Sri Lanka. “Because I did OK in the World Cup all the teams researched my game. There were a lot of flaws in my batting at the time, and Sri Lanka spotted those weaknesses and directed the ball at my ribs. I had no leg-side game at that time, so I just couldn’t hit the ball.” 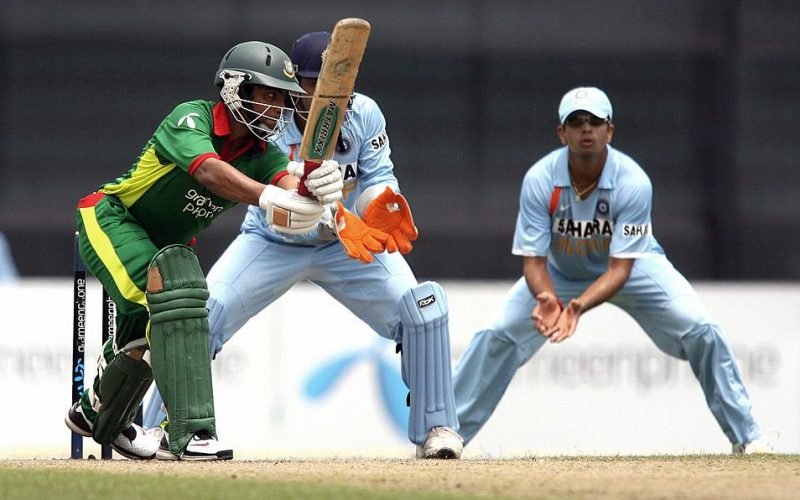 The feeling of helplessness did Tamim a major service. He understood there was no alternative to hard work. “It has happened that the national team training session starts at 2 o’clock, and I’ve been practising indoors on my own from 9am. The entire right side of my body has got bruised black and blue because of balls from the bowling machine. That’s why my weakest point is now my strongest point.”

The performances bear him out. He passed 50 in nine of his 14 Test innings in 2010. His maiden Test century, on the West Indies tour in 2009, played a major role in winning Bangladesh their first Test abroad. His second – against India, at Mirpur – is his highest Test score, 151 off 183 balls. But Tamim holds his two consecutive hundreds in England above them all: “From the self-confidence perspective, I would consider those two centuries the turning point in my career. Playing in England, that too in May… the biggest gain from those centuries was the belief that if I could do it once I can do it again.”

Cricket is now his religion, a dream that transcends barriers. “I imagine weird stuff – what if I hit 100 centuries, or what if I make 400 or 500 in an innings? I dream of Bangladesh needing 60 runs in two overs and I win them the match.” These are mere dreams to Tamim Iqbal. To anyone who has seen his spectacular batting, they are possibilities.

This article first appeared in the 2011 Wisden Cricketers’ Almanack. You can pre-order this year’s Almanack here.