Shivnarine Chanderpaul showed plenty of determination to hit 446 runs across just three Tests against England in 2007. He was named a Wisden Cricketer of the Year the following spring, with Ian Bishop paying tribute to him in the almanack.

No more single-minded or determined batsman has traversed the West Indian cricketing landscape since Brian Lara’s debut than Shivnarine Chanderpaul. The tour of England last summer confirmed his place in the pantheon of West Indies batsmen. Demonstrating extensive spells of concentration and stamina, he repelled England’s bowlers for 1,074 minutes between dismissals and averaged 148 in the three Tests he played. He thus became the first man to record three 1,000-minute vigils in Test cricket, his 1,513 minutes without being dismissed by India in 2002 being the longest of all.

In resisting the seam at Lord’s and swing at Riverside, Chanderpaul was exceptional, but it was his 116 not out in testing conditions with bounce, seam and jagged rough at Old Trafford that cast off his reputation as one who prospers mainly on pitches of low bounce: an innings he refers to as his “best ever”. It was as if, with Lara’s international retirement after the World Cup, and the premature departure of captain Ramnaresh Sarwan through injury, Chanderpaul felt galvanised to shoulder the team’s burden as their most experienced batsman. That no other West Indian managed a score of more than 60 in the Tests speaks of the yawning gap between his skill, commitment and experience – and theirs.

The achievements of Shivnarine Chanderpaul are inextricably linked to his upbringing. He was born into humble surroundings on August 16, 1974, in a fishing village on the north-east coast of Guyana aptly named Unity Village, whose ethnic mix comprises a population of East Indian and African descent. As if it was preordained, he recounts how he grew up no more than a couple of minutes’ walk from the village cricket ground. Heroes and role models were something that he neither sought nor found beyond his immediate family: he counts himself fortunate to have grown up in “a relatively stable home environment. To have both parents at my side actually supporting me was a big help.” A lot of his team-mates aren’t so lucky.

Khemraj Chanderpaul, an admirer of Alvin Kallicharran, and his son literally carved out a pitch on the ground’s periphery so as not to inconvenience the two village teams who shared the main centre strip. At eight, Shiv played for the village team: “an experience in itself, going out there to play with big men”. Ever since he has had a love of batting. “I would bat for hours and hours against my father, uncle (who had trials for Guyana) or anyone else who would offer to bowl” – male or female. He learned to bowl himself, but only to get them out quickly so he could bat again.

He was taken by his father to the Everest club in Georgetown, but lack of opportunity forced him to Demerara Cricket Club, for whose Under-16s he played aged ten. Eventually he returned to the East Coast. It was a family friend, Sheik Mohammed, who advised Khemraj to take his son to the most prestigious club in the country, Georgetown CC, after watching him play an impressive innings. And it was at Georgetown’s ground, Bourda, that he made his Test debut against England in March 1994 at 19, his selection not greeted with consensus at all. For Chanderpaul himself it was “a shock and made my hair stand on end”. A solid if somewhat nervous 62 eased, if not dispelled, the doubts. 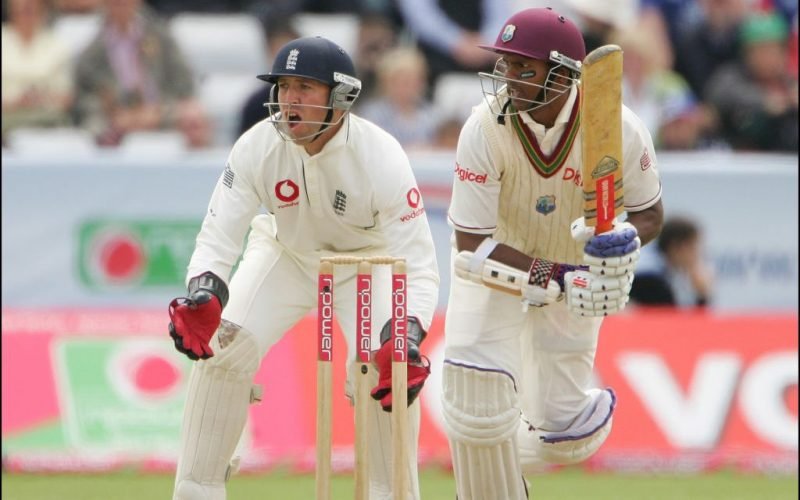 Frustration followed as he was unable to convert any of his first 13 Test half-centuries into hundreds. That first landmark eventually came against India, against whom he averages more than 71 in Tests. Terms such as dogged, crablike and accumulator have been used to describe him, yet Chanderpaul is versatile enough to have scored what was then the third-fastest Test century recorded in terms of balls faced (69), against Australia at Bourda in 2003. “Balance is important, a steady head and not shuffling too much.” Substance rather than style has been his ethos.

Chanderpaul refers to his almost interminable concentration as “an immense skill and unique gift – a divine gift bestowed by Lord Shiva”. He has matured into a devout Hindu since meeting his guru a few years ago and carries an altar with him on his travels. In truth, his seemingly infinite powers of concentration are also a product of the incessant appetite he nourished in those formative years, polished now by meticulous preparation and an intense work ethic. A team-mate once said: “The difference between Chanderpaul and some others is that if he gets home from tour tomorrow and is asked to go to Timbuktu to play a game of cricket, he will go.” Shiv says: “As a youngster I did anything to get better, like hours of knocking a ball buried in a pair of unfortunate socks hanging from a string.”

As a personality he can be assertive and is a much tougher character than his public persona reveals. Sure, he can be shy – public speaking was never his forte during his stint as West Indies captain – yet he has never taken a backward step. This writer, who played several Test series with him, has seen more esteemed team-mates shrink in the face of the fastest bowling, but never Chanderpaul.

Given that he is a man of small stature, he is extremely bold and brave, confrontational even. He reminisces about soaking a concrete strip at Unity with water and having the bowlers throw or bowl the ball at high speed, gathering pace off the slippery surface. Once he was struck and began to cry, but his father said: “No crying here, if you want to play with the men you have got to be tough.”

Almost as reward for a durable and consistent career he was finally offered the chance to play county cricket in 2007 alongside former West Indian team-mate Ottis Gibson at Durham, and was the top scorer in the Lord’s final which brought them their first trophy. Gibson says Durham’s cricketers rave at Shiv’s willingness to pass on his experience to their younger players. In a paradigm evidenced by a frightening level of anomie among Caribbean youth, Chanderpaul’s standards are as high as ever, and after more than 13 years on the international treadmill his love for batting remains undiminished.

Chanderpaul played the last of his 164 Tests in May 2015, finishing as West Indies’ most capped Test player and the second-highest run-scorer after Brian Lara with 11,867 runs at 51.37.