Stuart Law paid a heavy price for playing in an era of great Australian batsmanship – he made just one Test appearance. But he was named a Wisden Cricketer of the Year in 1998 after taking out his frustration on county attacks.

At least one selector thought Stuart Law should have been on Australia’s Ashes tour of England. Graham Gooch said he was “gobsmacked” to learn that Law had been overlooked, though delighted for Essex’s sake, and England’s. It was the last time that summer that anyone was to be lost for words to, about or from Law. He opened with a withering attack on the Australian selectors, saying he had already consistently outplayed the Australian batsmen and English bowlers who would feature in the Ashes series, and that if he was being ignored because of his attitude, they could get stuffed.

He then made good his promise to take out his disaffection on the counties, smashing 1,482 runs in the Championship, and 1,088 more in the one-day competitions, including 80 not out in the NatWest Trophy final at Lord’s to win the match for Essex and the match award for himself. It was not just the volume of runs he made, but how he made them, that had such an impact. Without departing too far from the orthodox technique he had crafted from schooldays, he scored at nearly a run a ball in all competitions, reminding himself constantly that cricket had to be above all an entertainment, for himself as well as for the spectators.

His full-bladed driving through the off side was intimidating for opposition cover fieldsmen. So, for that matter, was his manner. An unashamed sledger, he was an energetic and rasping with his tongue as he was with his strokes. Late in the season, in a NatWest semi-final at Chelmsford, Glamorgan’s Darren Thomas up-ended him with a beamer, whereupon the pair clashed heatedly. Law, of course, had the last word: Essex won.

Stuart Grant Law was born on October 18, 1968, in suburban Brisbane. His father, Grant, was a redoubtable grade cricketer in Brisbane, and had also captained Queensland’s Country XI. At 18 months, young Law got his first cricket bat, and, before he was in double figures, this admonition from his father: “If you’re going to play this game, you might as well play it correctly.” Thus his father impressed on him at a young age the importance of technique; later study of classicists like Greg Chappell and Martin Crowe reinforced it.

Law rose speedily through the conventional ranks, playing first grade in Brisbane at 15, appearing for state under-age and colts teams, and playing in the 1987/88 Youth World Cup in the Australian Riverina. At Berri, he took the liberty of driving the Indian leg-spinner Narendra Hirwani for a couple of long sixes only weeks after Hirwani had taken 16 West Indian wickets on his Test debut. The next season, 1988/89, Law made his debut for Queensland, and scored 179 in his second match.

By September 1997, he had made almost 10,000 first-class runs as well as 1,145 in one-day internationals for Australia. He has also taken 64 first-class wickets, at first with medium-pacers and latterly with a crude form of leg-spin that had its highest expression in two overs in a World Cup semi-final at Mohali in 1996.

Law’s list of achievements is as diverse as it is distinguished, and sorting out a single highlight is difficult. He captained Young Australia on their tour of England in 1995. He has made a one-day century for Australia and appeared in a World Cup final, the memory tarnished only by the fact that Australia lost to Sri Lanka. Law is, and this is a particular point of pride, the only man to have captained Queensland to the Sheffield Shield – and he has done it twice. 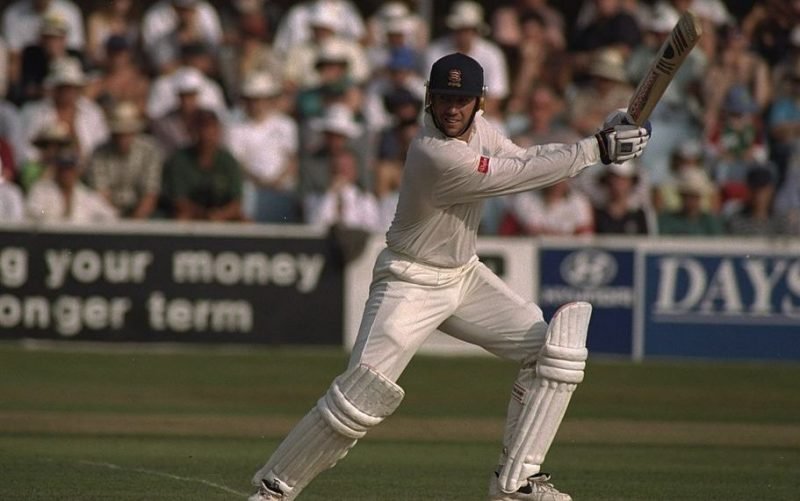 Despite being a towering figure in county cricket, Stuart Law played just one Test for Australia

He was watching on television as a 16-year-old when Queensland tumbled to another heartbreaking defeat in the final. He remembers thinking that there was still a chance for him to play in the historic first win, though did not imagine for a moment that he would be captain by then, and moreover would have Allan Border, Test cricket’s longest-serving captain, as his lieutenant. He holds dear the NatWest trophy triumph of last season, if only because it gave him the chance Australia had never afforded him to perform in front of a full house at Lord’s. His abiding memory is of Gooch, whom he regards as a kind of mentor, whispering to him just before he walked out to bat that afternoon: “Stewy, just be the best! That’s what I used to tell myself. Just be better than anyone else out there.”

Most of all, though, Law cherishes his one Test appearance, against Sri Lanka in Perth in December 1995, in which he made an unbeaten and effortless half-century in Australia’s only innings (and so, of course, he does not have a Test average). “To actually don the baggy green cap… I can take that to the grave with me,” he said. By the next Test, Steve Waugh was fit again, Australia were not quite ready to drop David Boon, and Law was jettisoned. Sometimes he dwelt on the injustice, believing that he should have had three Tests to prove or disprove himself. He contests the idea that he is a one-day specialist, yet has to live with it.

In a peculiar sense, he is a victim. In an era of batting plenty in Australia, a man’s destiny is determined as much by lucky breaks as anything else, and Law has not had them. It may be that his independent spirit has worked against him. He is from cricket’s new age, but not of it. He is what Australians call a knockabout bloke. His values are rugged and timeless: play your shots, speak your mind, back your mates, do anything it takes to win and have a drink with friend and foe alike when it is done. He frowns on the gym culture and treats fitness training as a duty rather than a vocation, while pointing out that he rarely misses a match because of injury and is never less than cricket-fit.

“I’m proud to have played Test cricket but fifties don’t count for much, it’s hundreds that are important and I look back on that century in Hobart with great pride.”

From the archives: Stuart Law looks back on his run-laden playing career.https://t.co/6hENsTbxzr

Australia’s excess has been Essex’s gain. Recommended to the county by Mark Waugh, he has made such appeal on and off the field in the last two seasons that Essex did not hesitate to re-engage him in preference to Waugh at the end of last season; the irony was lost on no one, but nor was the compliment. His batting still has the cavalier flourish of youth but, at nearly 30, he is mellowing and maturing. By the end of his second season at Essex, he had called a truce in his war with the Australian selectors, and for that matter with his inner self.

“Even if I don’t play international cricket again, I’ve had a great career. I can look back and think that, maybe, in another time and place, I would have played more,” he said. “But I made it. I’ve been considered for a number of years now to play for Australia, the best team in the world, that’s a feather in anyone’s cap.” And, as he says, at least he had a cap.