Despite being troubled by a knee injury during West Indies’ 1963 tour of England, Rohan Kanhai starred with the bat to power his side to a 3-1 Test series win. He was named a Wisden Cricketer of the Year the following spring.

It would be difficult to imagine a more entertaining batsman than Rohan Babulal Kanhai, leading scorer for either country in last season’s England v. West Indies Test series. Quick of eye and foot, he times the ball almost perfectly when executing a wide variety of strokes, some of which border upon the audacious, and at his best he can master the most formidable of bowlers.

Born on December 26, 1935, on a sugar plantation at Port Mourant, British Guinana, to which Colony his grandparents emigrated from India, he is slightly built and stands only 5 ft. 7 ins., is a non-smoker and drinks in moderation. Like most male inhabitants of the West Indies, he took to cricket as a matter of course at an early age and when eight was in the team at the local Roman Catholic School as wicket-keeper-batsman.

In common with all schoolboys in that part of the world, he played without gloves or pads – a reason, he considers, why West Indies batsmen are less addicted to pad-play than players of other countries.

During four years he made many runs for the school, whom he captained in his last season, without putting together a century. Though receiving no coaching, he advanced steadily – he hit his first three-figure innings for Port Mourant CC when sixteen – through studying the methods of leading players, and in 1954 he graduated to inter-county matches, so attracting the attention of the Colonial cricket authorities.

He appeared for East India CC in the Case Cup Competition and gained a place in the British Guiana team in 1955 when nineteen, scoring 51 and 27 in the match with the Australian touring side. Thenceforward he did not look back.

In 1956, he distinguished himself by hitting 129 from the Jamaica bowling and 195 against Barbados in the Quadrangular Tournament, following with innings of 62 and 90 in the first of two trials staged to help in the selection of the party to tour England.

Like other West Indies batsmen that year, he did not produce his best form in England, where his aggregate in the five Tests amounted to 206 runs, average 22.88. In the first three meetings with England he kept wicket in preference to FCM Alexander in order to strengthen the batting, but since then he has seldom figured behind the stumps, preferring to concentrate upon run-getting.

In the next three English summers, Kanhai played for Aberdeen in the Scottish League; in 1961 he assisted Milnrow and in 1962 Blackpool, both in the Lancashire League.

Between these professional engagements he appeared regularly for the West Indies. He figured in all five home Tests with Pakistan in 1958; he played five times against India and three times against Pakistan in 1958/59, hitting 256 – his most cherished performance – at Calcutta and 217 at Lahore. During this tour he scored 1,518 runs, average 58.38. In 1959/60 he played in all Tests against England, staying six hours eighteen minutes for 110 in a vain effort to save the match at Port of Spain.

A year later he participated in the epic tour of Australia, where in five Tests he hit 503 runs, average 50.30, scoring 117 (in just over two hours) and 115 in the drawn third match at Adelaide. With the aid of 252 against Victoria he headed the West Indies batting figures for first-class matches with an aggregate of 1,093 – a record for a West Indies batsman in Australia – and an average of 64.29.

In the West Indies in 1962, he was chief run-getter against India with 495 runs (two centuries) at 70.71 an innings and in England last year scored 497 in the five Tests.

For his success Kanhai says he owes a tremendous amount to Frank Worrell, whose advice has helped him to an incalculable degree since he set foot on the ladder of first-class cricket. 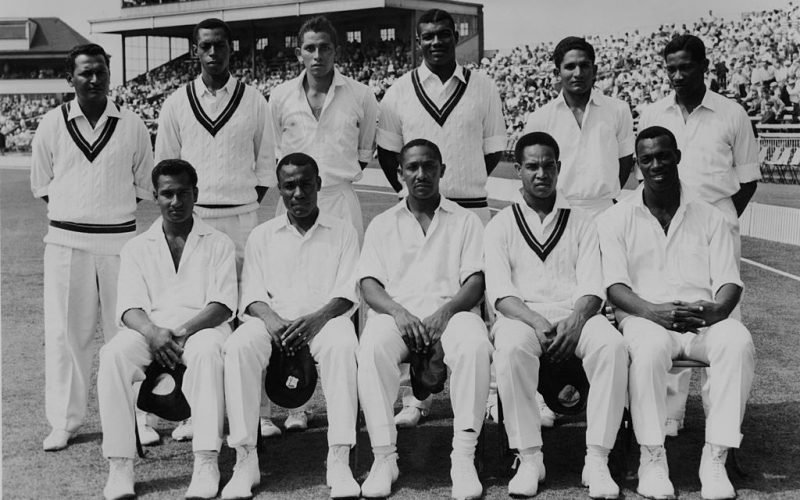 He recalls with amusement, however, how he got his first trial for British Guiana. Four players were available to fill the last two places and it was decided to settle the problem by drawing two names from a hat. Kanhai was unsuccessful; but the following morning he was called upon to play, for one of the lucky players had wrenched an ankle.

The most difficult decision of his life, he says, was when he pulled a hamstring before the second Test at Melbourne in 1960/61. The doctors said that he could not play and he spent a sleepless night bemoaning his misfortune. Next morning he approached Worrell and said that, if the captain were willing, he would turn out. Worrell decided to take the chance and Kanhai scored 84 and 25.

A knee injury troubled him for much of last season’s tour of England and it deteriorated so much that a specialist advised him that he would be taking a calculated risk if he appeared in the final Test at the Oval. It was suggested that if he wished to put the limb to rights, then an immediate operation would be advisable. Again Kanhai decided to play and he hit 30 and a dazzling 77 in seventy minutes which helped materially in a victory for the West Indies by eight wickets.

Shortly before the end of the tour he surprised his team-mates by secretly marrying an English girl.

Rohan Kanhai scored 6,227 Test runs at 47.53 and registered 86 hundreds in first-class cricket. He was an integral part of West Indies’ 1975 World Cup triumph, contributing with a crucial 55 the final.