Rick McCosker took a long time to make it into the Australian team, but once he got there he proved hard to shift. After a successful World Cup and Ashes tour, he was a Wisden Cricketer of the Year in 1976.

Over the years Australia has a solid record of cricketers who have graduated from country areas to the City, on to Sheffield Shield cricket and then into the Test arena. The most famous of them was Bradman, who hit 118 in his initial Sheffield Shield game against Clarrie Grimmett; then there was McCabe and, since then, many boys from the bush have moved on to greater things.

In New South Wales in recent years Brian Booth and the left-arm spinner Johnny Martin are two who were taught their cricket in the country. Booth later moved to Sydney to live, but Martin continued to live at Burren Creek and journey to Sydney each week to play club cricket.

Following in their cricketing footprints is Richard Bede McCosker. Born on December 11, 1946, he played his early cricket in his native Inverell (NSW) – a country town 418 miles from Sydney and closer to Brisbane than to the southern city. McCosker is anything but the prototype of the young shooting star. He was 20 years of age when he made the move to Sydney, where he joined a Sydney grade club as a third grader. 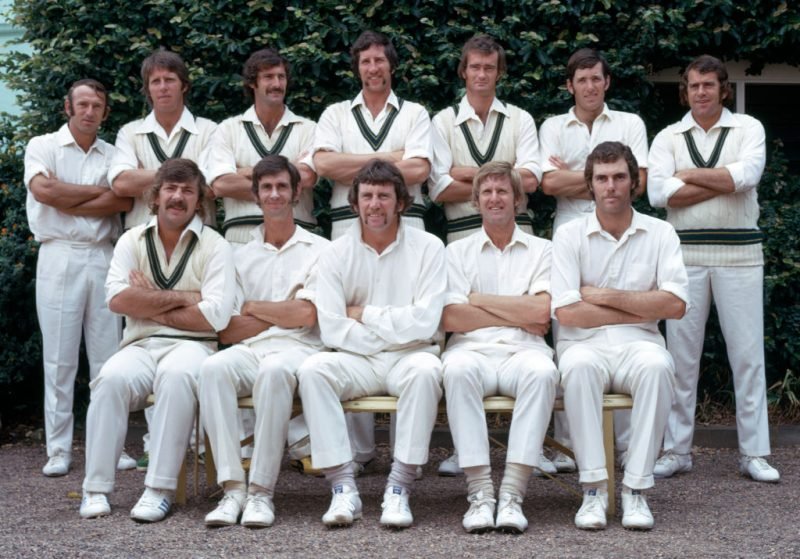 The Australia side for the SCG Test against England, January 4, 1975. Rick McCosker is second from right in the back row

By the end of that season he was in first grade but his main worry then was whether or not he could hold his place in that grade the following summer. It took him five seasons to catch the eye of the New South Wales selectors at a time when NSW batting strength was at a low ebb. In all this time he was battling away in the top half of the batting order with no thought of opening the innings – it was hard enough making runs down the list at that stage.

His first real breakthrough came in the 1972/73 season when he was chosen for the NSW Colts team to play Victoria and made a solid 48 – and followed it with a duck in the second innings. That summer he finished eighth in the New South Wales Cricket Association grade averages with 565 runs at 40.36 and it was easily his best year, quite a contrast with the previous year when he barely averaged 30 an innings for 486 runs, but even then he was being spoken of as a future State player. Elegant and yet solid was the seemingly contradictory description I read of him, yet today it still describes him perfectly.

In New South Wales not many cricketers make their debut as batsmen within a fortnight of turning 27, but McCosker did it on November 23, 1973. In a way he struck a blow for the late maturing cricketer, the ones who need time to settle in, as distinct from the ones the selectors try to produce from nowhere.

His debut was less than auspicious. Terry Jenner’s topspinner accounted for him when he had made 13 in the first innings; he didn’t bat a second time and there was the anguish of wondering if he were to be given a second chance batting at No.6. The following week he made 71* against Western Australia in Sydney and finished the season with 263 runs at 44 per innings, second only to Ian Davis of those who had made 250 runs for the summer.

At the age of 27 he had made it and, with England to tour Australia the next season, he must have forced himself on to a list of a dozen or so young players whom the selectors would be keeping an eye on. “I hadn’t really thought about Australian selection to that point,” he says. “It was enough until then to have made the transition from grade to Sheffield Shield, without thinking about taking another jump. But at the end of the season I must confess I was hoping for a good start to the following year, even though the Australian batting order was quite stable with Redpath, Ian and Greg Chappell, Edwards, Walters and Marsh impossible to move past.”

In fact, it could hardly have been a worse start to the season. Denness’s men were loosening up at the nets in Adelaide, whilst McCosker scored nine runs in two innings in Brisbane. Then shortly after, in Sydney, he chased 422 runs on the first day of the game against Western Australia, with Wally Edwards, Laird and Marsh all hitting centuries.

There is not the slightest question in my mind that the second day of this match was the most vital in McCosker’s cricket career. Before he had scored he was dropped at slip by Inverarity off Lillee, a happening that brought an exclamation from Lillee which could be heard by people boating in the Kippax Lake. McCosker was undeterred. He batted calmly and courageously to steer New South Wales to 290 for five, remaining unbeaten with 138 but dismissed next morning without adding to his score. New South Wales followed on and at 124 for five they were close to defeat, but McCosker hit another century, not out this time.

I watched both those innings from the press box and it was clear that here was a batsman of ability. He wasn’t captivating to look at but he was a neat strokeplayer. He wasn’t all that elegant but he was a fine timer of the ball. He wasn’t dynamic but he was courageous and thoughtful for his batting partners. Above all, he tried tremendously hard and, in the end, New South Wales escaped their impending outright defeat.

When Western Australia’s Wally Edwards was found out by the England fast bowlers in the first three Tests, the selectors gambled with McCosker for the Fourth in Sydney and he rewarded them with a fine innings of 80. In a short time he had moved from an inexperienced No.6 for New South Wales to a Test opening batsman – quite a meteoric rise, even by Australian standards.

That was his greatest moment in cricket. “To walk out that day with Ian Redpath was the best moment I’ve had,” he says. “At the same time, it was also the most nerve-racking, quite different from going in down the list in your first Test. I found that day and since then that I’ve had to make some mental changes but not many changes in technique. I feel more at home batting at number one than I ever did going in down the list.

“There is one point I feel is valid though – opening the batting under the bonus points system in Australia (and England, for that matter) has produced a new problem in that the two openers always seem to be starting the innings at the end of the day. The 65 overs are almost always completed, say, three-quarters of an hour before stumps and that really makes it tough – but interesting.”

McCosker’s great season had the natural follow-up of selection for the Prudential World Cup series and the four Tests against England in the UK and, again, he was an instant success. He is the first to admit however that English pitches in 1975 hardly posed the problems he had been told about by experienced players. “That was a marvellous summer and just about every pitch we played on was very much in favour of the batting side. I doubt that will happen in 1977 – in fact, Headingley in the World Cup semi-final and the Test match gave me an idea of what true English conditions could be like.”

Related Story: Why Suryakumar, Shaw, Kishan and Natarajan did not get BCCI central contracts

McCosker, as quiet and modest off the field as he is on it, has not thought about his prospects of captaincy but he took over New South Wales last season when Doug Walters was injured before the first Test against the West Indies. He did a sound, orthodox job and I would not be at all surprised if he fills a position of responsibility in the Australian team in years to come. He looks a readymade deputy for Greg Chappell for the 1977 tour of England, a far cry from the struggles to gain recognition in the big smoke for five years from 1967.

Rick McCosker signed up for Kerry Packer’s World Series Cricket in 1977, thus limiting his Test career. He made 25 appearances for Australia, scoring 1,622 runs at 39.56.