Ray Lindwall was one of the all-time greats of fast bowling. After his performances for Don Bradman’s Invincibles in England in 1948, he was named a Wisden Cricketer of the Year.

By whatever standard he is judged, Raymond Russell Lindwall must be placed permanently in the gallery of great fast bowlers. The fact that in England his uncommon speed gave him an advantage over many batsmen meeting bowling of such pace for the first time did not detract from Lindwall’s superb control of length and direction, his change of pace and general skill, the like of which in a slower bowler could be classed as cunning.

Even though his 27 wickets against England equalled the highest by any Australian fast bowler in England and was only two short of CV Grimmett’s total of 29 in 1930, Lindwall’s effect on the Tests could not be measured alone in terms of wickets. More important was that England gained the encouragement of a good opening stand in only one Test, at Leeds. Usually two or three wickets fell to Australia’s first speed attack, and Lindwall was mainly responsible for the early successes which gave his side an initiative they seldom lost.

Yet out of the blows he dealt to English batting pride Lindwall may have performed two acts of service to English cricket. Besides exposing flaws in the technique of leading players, he should have done more to rouse young cricketers to take up fast bowling than would all the prose of pavilion pundits. Truly, never was example more inspiring than precept. Seldom in England was Lindwall required to play a big innings, but when the occasion arose he showed himself a fine batsman of attractive methods which, with his safe catching and fielding, made him a first-rate all-rounder.

Lindwall, born on October 3, 1921, began cricket by playing in the paddocks near his home at Mascot [Sydney], where often the wicket consisted of chalk markings on the fence. Through school life at Hurstville Convent [Sydney], Kogarah Marist Brothers and Darlinghurst Marist Brothers, which he left when 18, Lindwall received every assistance in cricket, particularly from one of the Brothers at Kogarah.

At 12 Lindwall hit his first century, and when only 15 he made a double century and a century on the same day, scoring 219 for Oatley Juniors in the morning and 110 for Carlton Waratah in the Men’s League in the afternoon. A year later, Lindwall first appeared for St George’s CC, whose captain, WJ O’Reilly, took a hand in his development.

Besides bringing into use electric-eye photography, which enabled Lindwall to see his own faults in slow motion on the screen, O’Reilly showed his protégé how to remedy them. At the age of 20 Lindwall earned a place in the New South Wales side against Queensland in 1941, and in the second innings he clean bowled a batsman in each of three successive overs. 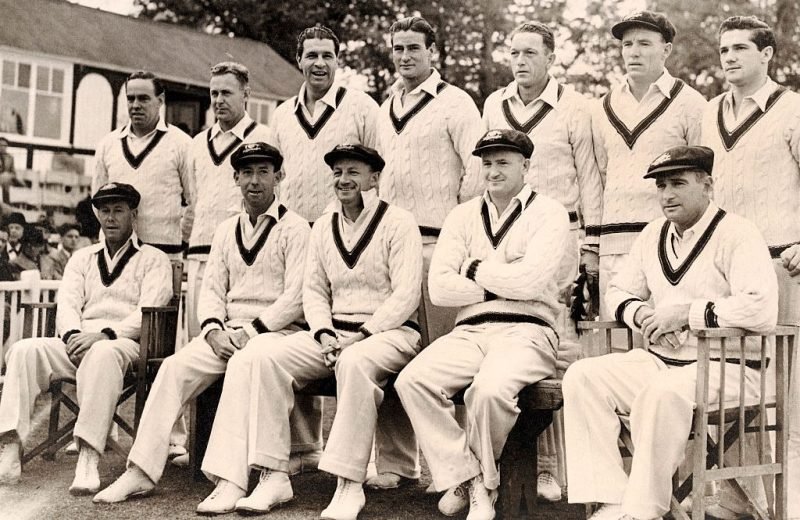 On return from war service in New Guinea and the Solomon Islands, where he was believed to have contracted malaria, though medical tests did not confirm this, he needed injections and atebrin tablets to pull him round from bouts of minor illness for some time afterwards, and he resumed State cricket in 1945/46. An innings of 134 not out against Queensland pointed to his batting skill, and he crowned good bowling feats with nine wickets for 80 against South Australia.

Then came a trip to New Zealand with WA Brown’s team before the MCC side went to Australia in 1946/47. Chosen for the first Test, Lindwall bowled only in the first innings. An attack of chicken-pox prevented him playing in England’s second innings and in the second Test. Lindwall quickly got rid of Hutton in the third Test, and his all-round value to Australia was demonstrated when in the second innings he and Tallon changed an even situation with spirited batting which brought 154 runs in 87 minutes. Lindwall completed a magnificent century in 115 minutes.

In the fourth Test Lindwall came nearer to performing the hat-trick than at any other time in his career. He finished England’s innings by clean bowling three batsmen in four deliveries, the unsuccessful ball missing Wright’s stumps by a fraction. Lindwall took the last four wickets in two overs for two runs. Good as was this performance, Lindwall did better in the last Test, when he dismissed seven men for 63, one of the best fast-bowling feats in Australian history, considering the quality of the opposition and the perfect state of the pitch.

Lindwall headed the Test averages on either side with 18 wickets for 20.38 runs each. Even then there were little doubts about his selection for the tour to England: next season he played in all five Tests against India, and by taking 7-38 in the second innings of the fourth Test he became a certainty.

Fortunate as was Bradman in possessing such all-round strength that he could afford to use Lindwall sparingly, he handled him with splendid judgement in England. Only in Tests did he call upon Lindwall to bowl more than 20 overs in an innings, and throughout the tour gave him short spells of usually five or six overs. Not until a fortnight before the first Test at Nottingham did Lindwall begin to work up to his top pace. Then, in routing Nottinghamshire with 6-14 at Trent Bridge, he struck a moral blow for the forthcoming Test on the same ground. In the next match he twice ran through Sussex with a full analysis of 11-59.

Because of a pulled muscle he could not bowl in the second innings of the first Test, but, fit again for Lord’s, he took 8-131, and, after good performances at Manchester and Leeds, completed England’s humiliation with a match record of 9-70 at The Oval, where his 6-20 in the first innings played a chief part in England’s dismissal for 52. Moreover, when the Australians faced opposition that appeared formidable in the Festival at Scarborough, Lindwall stormed through HDG Leveson Gower’s side and made practically certain that the unbeaten record would be preserved. Such was the English season of Lindwall, the man for the big occasion and critical periods of the game.

Putting power, rhythm and purpose into every stride of a 16-paced approach, this magnificent fair-haired athlete, five feet eleven inches tall and weighing nearly 12 stone, from the moment of starting his run-up indicates a fine bowler, and, though his arm does not go over as high as the purists wish, he has preferred to retain his action and body swing rather than risk losing natural abilities in trying to bowl with an altered delivery.

Previously in Australia Lindwall dragged his back foot nearly a yard before releasing the ball and was the subject of much controversy, but after seeing a film showing this drag Lindwall increased his run-up by a pace and in consequence rarely was no-balled when in England. Constant practice during his early days enabled Lindwall to maintain remarkable accuracy for a man of his pace and he seldom allowed a batsman to leave a ball alone. Clear illustration of the manner in which he attacked the stumps all the time, except when bowling his bumper, is given in an analysis of his figures in England. Of his 86 wickets taken during the tour, 43 were clean bowled, 11 leg-before, and 14 caught by the wicketkeeper.

Lindwall, if not so consistently fast as was Larwood, put greater variety into his bowling, using a fast-medium stock ball, a slower ball which he perfected in England where he found it would swing more than in Australia, an extra fast one and the short-pitched bumper, all of which he disguised well, so keeping his opponents in a state of watchfulness. Many an English batsman seemed to be going on to the back foot before Lindwall released the ball, such was the effect of the bumper and the extra fast ball.

Related Story: Why fast bowling is arguably the toughest job in T20 cricket

Although in England Lindwall usually reserved his fastest ball till his third or fourth over, he could have bowled it earlier had he chosen, because, before taking the field, he would go through a series of physical jerks in the dressing-room to make himself supple, and on the field was always limbering up ready for his next bowl. Besides being a surf swimmer, Lindwall became a first-grade Rugby League full-back, and he has run 100 yards in 10.45 seconds.