Five years ago, the tragic passing of Phil Hughes shook the cricketing world; a spirited batsman grounded by humility and loved by many, Hughes’ departure left the game with a sudden, but everlasting legacy.

Phillip Hughes died two days after being hit by a short pitched delivery in a Sheffield Shield match at Sydney. Three days later, he would have been 26. Australian cricket had scarcely suffered a loss like it. The crowds that gathered for Hughes’s funeral in his home town of Macksville, a coastal community in New South Wales halfway between Brisbane and Sydney, were reminiscent of the 10,000 who attended the funeral of former Test batsman David Hookes in Adelaide in 2004; comparisons were also made with the thousands who lined Sydney’s streets in 1933 for Archie Jackson, who died of tuberculosis aged 23.

The fate of Hughes, though, cut even deeper, for he perished doing what he loved, and in front of the cameras. As Australia grieved, and their Test series against India was delayed, the poignancy resonated around the world. The second day of the Sharjah Test between Pakistan and New Zealand was postponed, while Sri Lanka and England players signed a book of condolence on the outfield ahead of a one-day international in Colombo. And when Paul Taylor, an IT analyst in Sydney, tweeted a photograph of his bat, cap on handle, outside his front door, it struck a chord and thousands followed suit.

When Australia and India finally took the field – in Hughes’s adopted city of Adelaide, five days after the series had been scheduled to start at Brisbane – the game drew comfort from its numbers. A giant “408” was painted on the outfield, denoting his place in the sequence of Australian Test cricketers, and a smaller version sewn under the badges on the home team’s shirts. The game was preceded by 63 seconds of applause, Hughes’s score when he was hit, by now amended from “retired hurt” to “not out”. And Hughes was named thirteenth man.

The First Test would most likely have marked the continuation of a career that had in effect begun more than a decade and a half earlier, when Jason Hughes persuaded his reluctant younger brother to turn out for his Under-10s team. Batting at No.11, the seven-year-old Phillip made 25 – and fell in love with cricket. By the time he was ten, the bowling machine at his father’s club had been moved to the Hughes backyard. By 12, he was scoring runs against adults. By 17, he was playing first-grade cricket with the Western Suburbs club, where he was befriended by Michael Clarke.

No record seemed beyond his grasp. Ten days short of his 19th birthday, in November 2007, he became New South Wales’s youngest first-class debutant since Clarke in 1999; and, four months later, the youngest centurion in the final of the Sheffield Shield (then known as the Pura Cup). 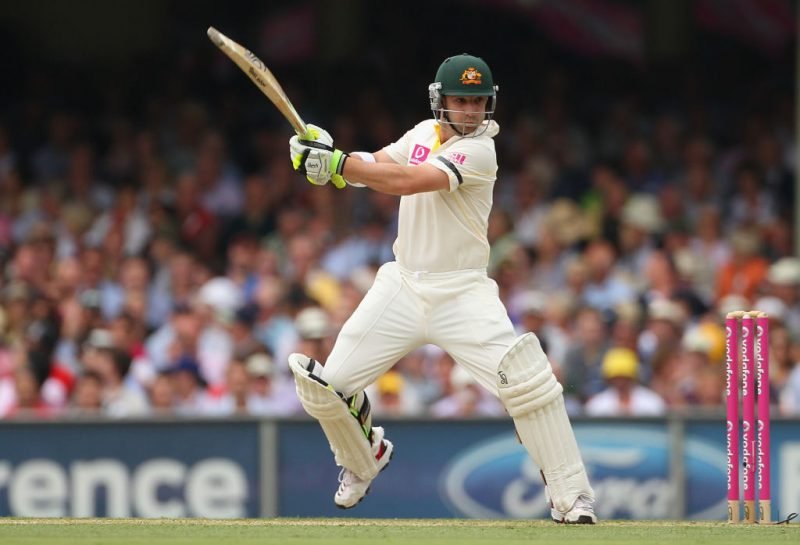 Clarke predicted he would play 100 Tests. The retirement of Matthew Hayden in January 2009 left an opener’s slot in the Test team. It came down to Hughes or his NSW colleague Phil Jaques – and a Shield game against Tasmania at Newcastle. Jaques made nine and 12, Hughes 151 and 82 not out. Soon he was winning his first Test cap at snarly Johannesburg. He fell to the game’s fourth ball, nicking Dale Steyn as he threw everything at a short, wide delivery. Not even a second-innings 75, Australia’s top score, could persuade the South Africans he was Test material.

In the next game, at Durban, against an incredulous Steyn, Makhaya Ntini and Morne Morkel, Hughes made 115 – moving from 93 to 105 with consecutive sixes off left-arm spinner Paul Harris – and 160. Yet more records: the youngest Australian to score a Test hundred since Doug Walters, against England in 1965-66, and – at 20 years 98 days – the youngest from any nation to score two in a Test, undercutting George Headley for West Indies against England at Georgetown in 1929-30.

In a short stint with Middlesex ahead of the 2009 Ashes, Hughes – who later had spells with Hampshire and Worcestershire – scored 574 runs in five innings. He was the talk of the town, and beyond, not least because many England fans felt he should not have been given the chance to acclimatise before the Tests. 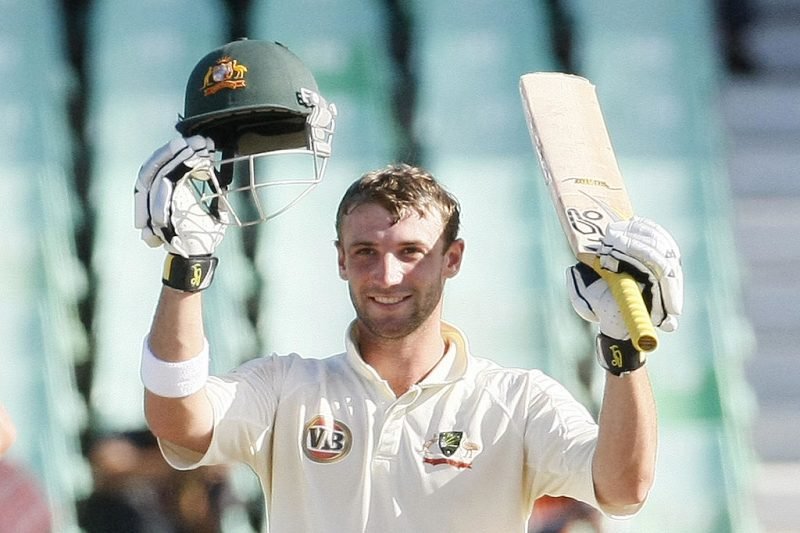 An upbringing on a banana and cattle farm had instilled in him an earthy modesty. He found comparisons with Bradman embarrassing; he had, wrote Peter Roebuck, “no tickets on himself”. Later, when he was in and out of the national side, team-mates noted his refusal to complain. The narrative of the country boy unspoiled by fame, always in touch with his roots, resonated with Australians. And it was at home that he learned his madcap technique, keeping the ball away from his mum Virginia’s vegetable patch behind square leg, and his dad Greg’s poultry at long-on.

Everything had to go through the off side: stepping away to leg and freeing his arms, Hughes developed the withering scythe that would become his trademark, and saved the tomatoes and eggs for the family table.

Some feared it would be his undoing. In those 2009 Ashes, England’s seamers tested him with a mix of short-pitched and good-length deliveries. The flip side of scoring so many runs in the arc between third man and cover was that he would go after balls others left alone. He was dropped after the Second Test at Lord’s, foreshadowing a career that was more stop than start: of Australia’s next 59 Tests, Hughes played 21. And in just one, in Colombo in September 2011, did he add to his two hundreds.

Worse, he was repeating mistakes: at home against New Zealand that December, he edged Chris Martin to Martin Guptill four innings in a row. Commentating on radio, Kerry O’Keeffe said: “If P. Hughes is shaving tomorrow and gets a nick, M. Guptill will appear from the medicine cabinet with a band-aid.” 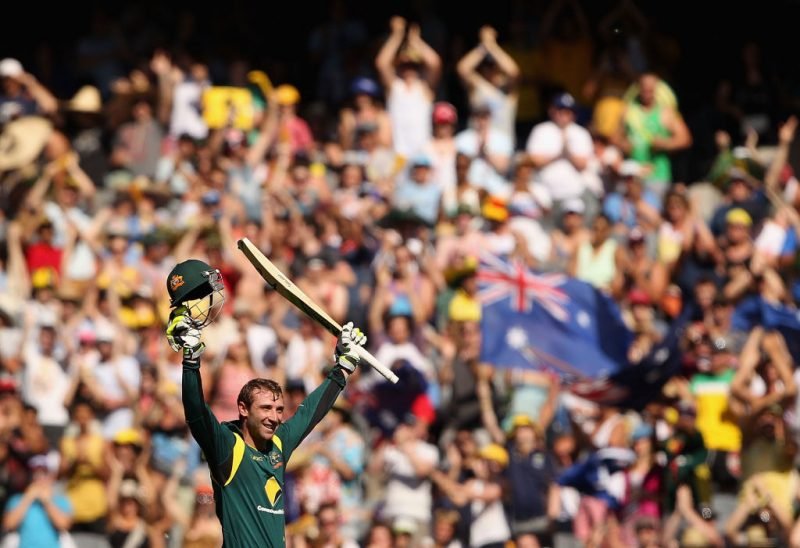 Phil Hughes was the first, and so far only, Australian batsman to score a century on ODI debut

The selectors, never forgetting Durban, forever fretting over his technique, seemed unsure how to proceed. Hughes, now at South Australia, dropped to No.3 for the visit of Sri Lanka in 2012-13, alternated between three and four during Australia’s subsequent whitewash in India, then started the 2013 Ashes at No.6. At Trent Bridge he played his most mature Test innings, an unbeaten 81 during a then world-record last-wicket stand of 163 with Ashton Agar. Promoted to No.4, he made one and one at Lord’s. It would be his last Test. An average of 32 spoke of a talent unfulfilled.

His limited-overs career proved indeterminate too. Made to wait – too long, some felt – he began in familiar, ground-breaking fashion, the first Australian to score a century on one-day debut, against Sri Lanka at Melbourne in January 2013. He finished that series with a match-winning unbeaten 138, out of 247 for five, at Hobart. But 19 more one-day international innings brought a best of 86, and that nagging sense of what might have been. Australia picked him for Twenty20 only once, against Pakistan at Dubai in the month before he died; another debutant that day was Sean Abbott, whose bouncer would fell him at the SCG.

There had been time for one last piece of history. In July 2014, a week after the death of his grandfather, Hughes carted South Africa A for an undefeated 202 from 151 balls in Darwin, becoming the first Australian to hit a List A double-century. The innings included some outrageous inside-out lofts over cover, several whirligig slashes over the slips, and a square-drive on one leg. A couple of weeks later, in a four-day game against the same opposition in Townsville, he made 243 not out. He seemed back to his best. 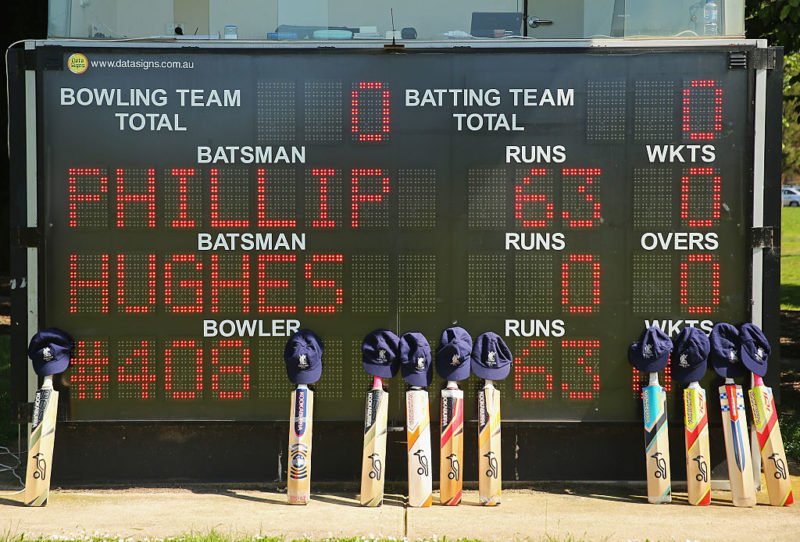 At the SCG on November 25, watched by his mum and sister Megan, Hughes had reached 63, and was on course for a return to Test cricket, when he was too early on a bouncer from Abbott. The ball hit him on the left side of his neck, just below his helmet, and burst an artery, causing a catastrophic bleed into his brain. Hughes put his hands on his knees, then collapsed, face first. He underwent immediate surgery at St Vincent’s Hospital in the suburb of Darlinghurst, where he was placed in a coma, but never regained consciousness.

So moving and well-attended was the funeral on December 3, when Michael Clarke spoke of the need to “dig in and get through to tea”, that a planned state memorial service was deemed unnecessary. Jim Maxwell, the veteran Australian broadcaster, said: “His brilliant, short-lived career epitomised the spirit of Australian cricket: a boy from the bush, homespun, instinctive and unaffected by the clamour of a monetised sporting life.”

Related Story: The Don Bradman comeback that took down both Merv Hughes and Patrick Patterson

Of the Durban hundreds, South African journalist Neil Manthorp had written in Wisden that Hughes’s idiosyncratic style would “either threaten every batting record ever set, or fade quickly after a couple of years once bowlers work him out”. Neither happened. Nor did Phillip Hughes fulfil his wish to retire into farming, help his family on the 220-acre plot he had bought them on the edge of Macksville, and pass on “useless facts about cows”, as Clarke put it in a eulogy that spoke for a family, a nation and a sport.

First published in the 2015 Wisden Almanack.