Peter Richardson came from nowhere to play a big part in England’s successful 1956 Ashes campaign. It earned him a Wisden Cricketer of the Year award.

The way Peter Richardson, the Worcestershire farmer, stepped into the breach on the retirement of Sir Leonard Hutton and formed a highly profitable Test opening partnership with M.C. Cowdrey was a considerable factor in helping England to retain the Ashes.

Eldest of three brothers, Peter Edward Richardson was born at Hereford on July 4, 1931, and educated at Hereford Cathedral School where for four years he was in the Eleven, being captain in the last season, 1948. While none of his relatives played first-class cricket, his parents have always been keen sporting enthusiasts and his father took part in club cricket.

At a very early age, Peter Richardson began as a right-handed batsman, but he soon discovered that the left-handed method came more easily. He developed naturally without coaching until in 1946 he was spotted by A.P. Singleton, the Oxford University captain of 1937, who played for Worcestershire before migrating to South Africa.

On Singleton’s recommendation, Worcestershire invited him to the county ground for coaching and for three years, 1947 to 1949, he came under the attention of two of the county’s leading professionals, R. Howorth and J.S. Buller. By a coincidence, Buller was one of the umpires when Richardson made his Test debut against Australia at Trent Bridge last summer.

During his holidays, Richardson played for Hereford club and on leaving school in the spring of 1949 he not only proceeded to gain a place in the Worcestershire Minor Counties XI, but also appeared in four first-class matches. His beginning was modest, but Worcestershire realised they had discovered a young amateur of much promise.

His connection with Worcestershire grew closer in 1950 when his family moved from their farm at Hereford to one at Norton, a village three miles outside Worcester. Then he joined the Stourbridge club which in recent years produced R.E. Bird, D. Kenyon and M.J. Horton. For two years Richardson made only intermittent appearances in the county side and showed no noticeable advance. Whereas in all school and club cricket he batted at No.1, he had been going in between three and seven for the county.

The season of 1952 marked the turning-point in Richardson’s career. Worcestershire needed a regular opening partner for Kenyon because E. Cooper had gone as coach to the Royal Naval College, Dartmouth. They gave Richardson six matches to prove his worth and when towards the end of May he scored 28 and 87, helping his side to a fine victory over Warwickshire, and then in his next game hit his maiden century, 110 against Oxford University, he never looked back. 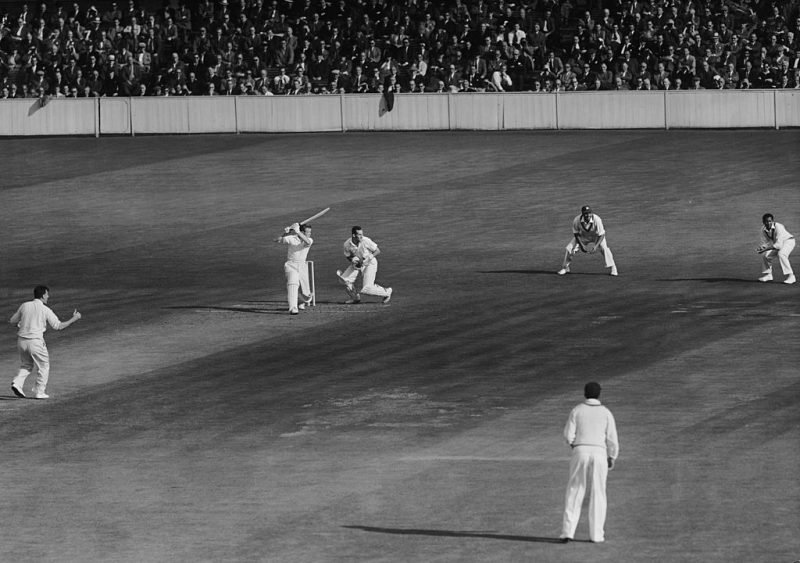 Peter Richardson batting against West Indies at The Oval

That summer brought him 1,502 runs and his county cap, and in 1953, at the age of 22, he reached in his second full season 2,294, his highest aggregate to date. Some people thought he should have travelled with MCC to the West Indies; instead came two years in the Army, but stationed locally he still played some first-class cricket and on being free again made his first overseas tour with the MCC team that visited Pakistan at the end of 1955.

Richardson gained valuable experience and on returning he shouldered more responsibility by taking over the offices of joint-secretary and captain of Worcestershire. He enjoyed his new positions. They suited his sunny temperament and he celebrated his first match as captain by hitting a century against the Australians in the opening game of the season. That not-out innings of 130 saved Worcestershire from defeat and placed Richardson in line for his England cap.

In the next two Tests his scores were 9 and 21 at Lord’s and 5 at Headingley, but at Old Trafford he again touched greatness with his first Test century

His next trial was of brief duration, but it swayed the selectors, for in the course of making 36 not out for MCC against the Australians, he was struck on the side of the head by a rising ball. Continuing his innings later, he faced the bowling unflinchingly and settled beyond doubt any question about his courage.

So he was chosen for the First Test and he performed admirably, scoring 81 and 73, his second innings stand of 151 with Cowdrey being the first three-figure opening partnership for England against Australia for eight years. In the next two Tests his scores were 9 and 21 at Lord’s and 5 at Headingley, but at Old Trafford he again touched greatness with his first Test century, 104, and an opening stand of 174 which gave England their best start against Australia since L. Hutton and C.J. Barnett made 219 at Trent Bridge in 1938.

Fair-haired and of medium physique – he stands 5ft 9in and weighs 10st 10lbs – Richardson excels with a powerful cut, drives freely and has the left-hander’s ability to exploit the leg-side. A curious feature of his eight Test innings against Australia was his dismissal each time by a catch to the wicketkeeper, but more than once he sacrificed his wicket in endeavouring to get runs quickly.

Richardson firmly believes in the batsman taking the initiative and doing his utmost to unsettle the bowler. He can be stubborn in defence, but he prefers to seek runs and he is never happier than when stealing sharp singles, for he is a nimble runner between the wickets.

He pays full tribute to the constant help he has received from Dick Howorth. He says that Howorth has spared no effort and even now still keeps him up to scratch. Already one brother, Derek, has joined him in the Worcestershire team and the other, Bryan, shows such promise at the age of 12 that it may become a family concern like the Fosters of years ago. All three brothers bat left-handed and even after an arduous day the two seniors still practise with the youngest in the nets on the lawn at home. With such enthusiasm much more may yet be heard of the Richardson triumvirate.