Born on December 8, 1936, Peter Parfitt was named a Wisden Cricketer of the Year after scoring four Test hundreds against Pakistan in 1962. His profile in the Wisden Almanack followed his rise through the ranks at minor county Norfolk to the peak of English cricket.

The stars of Peter Howard Parfitt were set in the right quarter from the very start. Apart from his considerable natural ability, he was endowed with a quietly pugnacious yet buoyant spirit, and his father, Alec, renowned in Norfolk club circles, held firm and sound ideas on the proper upbringing of young cricketers.

On his garden lawn was a practice net, with a marled wicket, and he allowed none of his three sons, John the elder, who played for Norfolk, Peter or Richard to venture into club cricket until they were good enough to join a side using true pitches.

Parfitt knew none of the terrors of bad wickets in his formulative years, and sharing in his development was another wise counsellor, George Martin, headmaster of the preparatory School to King Edward VII, Kings Lynn, which Parfitt later attended. He finished at Fakenham Grammar School.

The combined help and enthusiasm of father and coach soon produced promising results. When 13, Parfitt, who was born at the Norfolk village of Billingford on December 8, 1936, represented the Junior Colts of Norfolk and in due course he graduated to the Senior Colts and the Young Gentlemen of Norfolk. 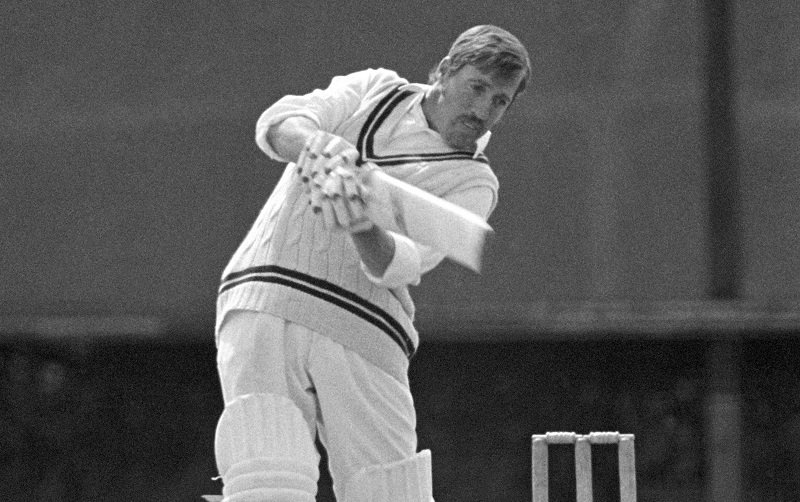 In 1953, Norfolk decided to include their most promising junior in a tail-end match. The choice fell on Parfitt, a left-handed batsman, but primarily a leg-break bowler, and he played against Buckinghamshire at Ascot Park. He bowled three overs for eight runs without a wicket, and, batting number nine, scored one run. He was twelfth man in their next fixture with Hertfordshire.

His Minor Counties career launched, Parfitt appeared in six of Norfolk’s ten matches in 1954 without setting the Broads on fire. In the following season this bud of promise flowered. Before his 18th birthday, be made 131 against Kent II — the first time he had opened an innings — and he was awarded his county cap.

After much heart searching and thought, the simple but important truth emerged -- that even the best bowling can be hit

Parfitt was growing fast. Between 1954 and 1955 he suddenly shot up from 5ft. 1in. to 5ft. 8½in., but with his extra height he found he could no longer bowl leg-breaks. He switched to off-breaks, and bowled against Hertfordshire at St. Albans, taking seven wickets for 43 in 25 overs.

Meanwhile, Parfitt had set his heart on becoming a games master, and while preparing to take his A level examinations (subjects: Geography and Zoology) he had an interview at Loughborough Colleges. In the autumn he played against an all-Edrich XI, and Bill, of that famous cricketing clan, who had noted Parfitt had headed both batting and bowling averages for Norfolk, sounded him about turning professional. 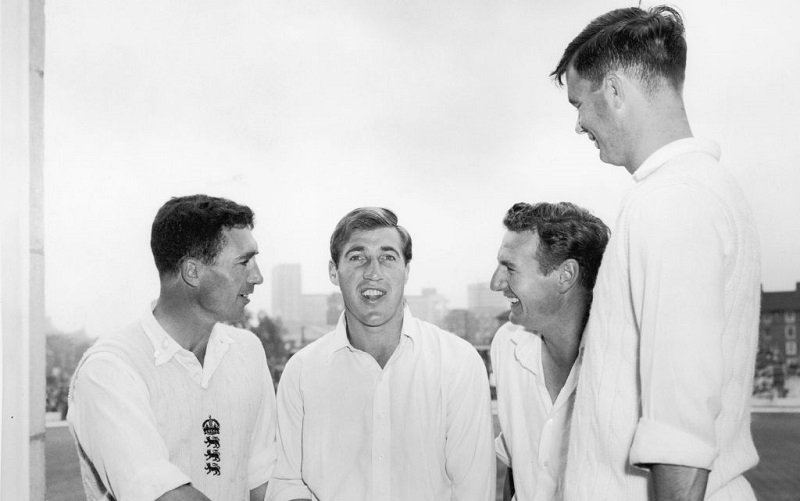 Peter Parfitt (second from left) with his teammates Fred Titmus, Jim Parks and Jon Price in 1964

Just before Christmas, Parfitt received the disappointing news (at that time) that Loughborough could not take him, and without more ado, he wrote to Edrich offering to become a professional with Middlesex. On January 11, 1955, Parfitt went to Lord’s and signed a contract with Middlesex, whose officials, Edrich apart, had never seen him play.

At the end of the Easter term Parfitt left school and in mid-April reported at Lord’s; he had little chance to settle. In June he had his medical and in September he was off for his National Service, remaining with the R.A.F. until September, 1958.

"I don't care how you get your runs, but I want you to play as you were meant to play. And that is to attack"

He was not lost to cricket in the R.A.F. He helped his camp team at Henlow, Bedfordshire, the R.A.F., Combined Services and, at odd times, his county. There was an innings of 115 against Warwickshire for the Combined Services and scores of 85 and 108 for the R.A.F. opposing Col. Stevens’s XI. His century was made in fifty-eight minutes which, although not qualifying for record purposes, was three minutes quicker than the fastest century of that season by A.C.D. Ingleby-Mackenzie.

For all that, Parfitt returned to Lord’s in 1959 with a fixation that solid defence alone guaranteed success in county cricket. It took two years of average performances, nowhere good enough for the ambitious young Parfitt to destroy that common fallacy. After much heart searching and thought, the simple but important truth emerged — that even the best bowling can be hit. 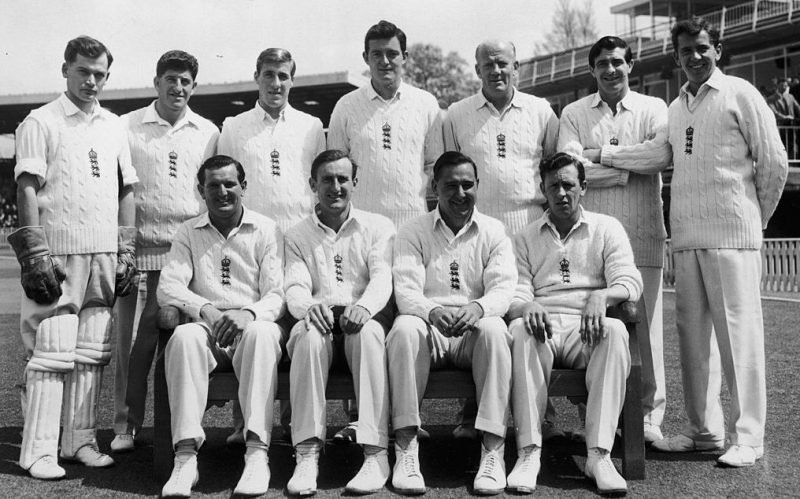 Peter Parfitt (back row, third from left) in England’s team for first Test against Pakistan at Edgbaston in 1962

Middlesex had a new captain in 1961 — Ian Bedford, who quickly rekindled Parfitt’s spirit of adventure. Bedford told him: “I don’t care how you get your runs, but I want you to play as you were meant to play. And that is to attack.” A new Parfitt harvested 2,007 runs, including eight centuries, in a golden summer, and to crown all he was selected to tour India and Pakistan with M.C.C. The door was opened to a Test career.

His tour began uncertainly, and he needed all his resilience and determination to fight through to better times. The turning point was a glorious innings at Hyderabad that won the day for the M.C.C., and on December 30, he was deservedly chosen for his first Test — the fourth with India at Calcutta. In difficult conditions he scored 20 and 46, and he followed with 25 and 33 in low-scoring innings in the next Test at Madras.

His success was achieved with an almost impertinent fluency of stroke play, and one of the joys of the 1962 season was the sight of Parfitt destroying every type of bowling with cheerful abandon.

In Pakistan he made his first century for England in the third Test at Karachi and began a phenomenal run of success. Back home and now an almost automatic choice for his country, Parfitt took centuries off Pakistan in the first, third and fourth Tests, and one in each innings for Middlesex at Lord’s.

In the fifth Test at The Oval, he sacrificed his wicket in pursuit of quick runs just before England’s declaration, and it can truthfully be written that his only real failure was at Lord’s in the Second Test, an astonishing record. His success was achieved with an almost impertinent fluency of stroke play, and one of the joys of the 1962 season was the sight of Parfitt destroying every type of bowling with cheerful abandon.

It is praise enough to record that his selection for Australia and New Zealand was taken for granted. Not a dissentient voice was raised. His Middlesex team mates have called him a left-handed Edrich. Others, mindful of his range of shots and his often impudent use of them, think more in terms of a left-handed Compton. Parfitt is content with either comparison.

Related Story: When Andrew Strauss joined Somerset on loan to play against India

Spring-heeled and agile on the field — he was a good enough footballer to be taken on by Norwich City as an amateur — Parfitt bowls only occasionally now. Fame, which has arrived with a burst, has not spoilt a modest and carefree nature, and he is shrewd enough to realise that the very boldness of his methods may not breed a consistent record. Clearly sterner trials than the Pakistanis were able to offer lie ahead, but whatever the future has in store, Parfitt will never be a dull cricketer.