Moeen Ali, who celebrates his birthday this month, had a remarkable breakthrough year against India in 2014. The following spring, he was named a Wisden Cricketer of the Year.

Dismissed as a part-time bowler, booed in his home town, and shocked to receive a death threat, Moeen Ali might have recalled 2014 for the wrong reasons. But the abiding memories were the 19 cheap wickets he claimed to help defeat India. Among English spinners, only Ray Illingworth, who took 20 in 1967, had taken more in a home series against them.

This had looked an unlikely scenario after the Sri Lanka series – when Ali picked up three wickets at 60 – or even the first Test against the Indians when, on a lifeless Trent Bridge pitch, he struggled to provide the holding role his side required (his 18 first-innings overs cost 97) and appeared to lack the confidence of his captain, Alastair Cook. It seemed England’s search for a replacement for Graeme Swann would have to continue.

The turning point came during practice before the second Test at Lord’s. Facing Ali in the nets, team-mate Ian Bell suggested he follow Swann’s example, and bowl straighter and quicker. Also there was Kumar Dharmasena, the former Sri Lanka off-spinner and one of the umpires in the series. Ali asked him how to find that extra pace. “He advised me to grab my pocket with my non-bowling arm after delivery, to get more body into my action and add pace without losing flight,” he says. “I tried it for one ball and knew it would work immediately. It made a huge difference.” 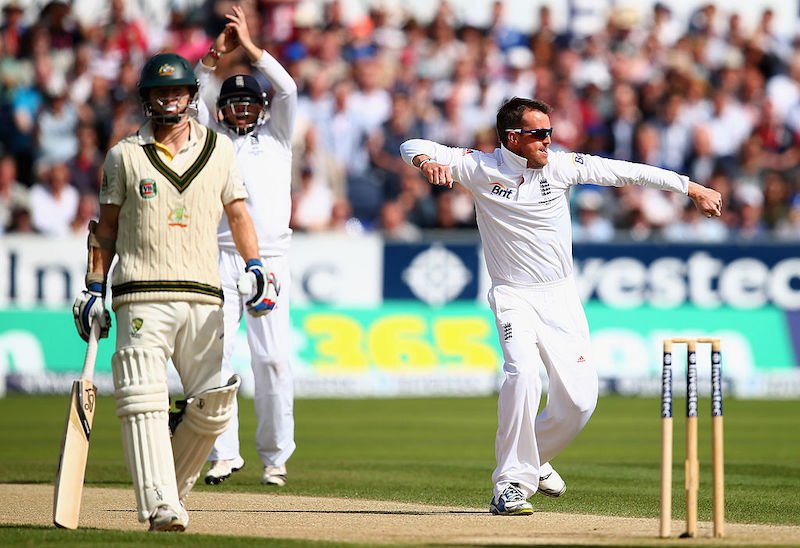 While this raised questions about coaching in England – why did a chance encounter provide a breakthrough where a decade of ECB tuition could not? – it also underlined Ali’s ability to learn and improve. Wickets did not follow immediately, but control did: at Lord’s, he went for less than three an over. Ali rated it his best bowling performance of the summer.

In the third Test at Southampton, he was challenging both edges of the bat. His drift made his arm-ball and natural variation as dangerous as his off-break, and his pace created sharper dip, making it hard for batsmen to come down the pitch. He claimed 6-67 in the second innings, then 4-39 in the second at Manchester. As Scyld Berry put it, the ugly duckling had become a Swann. In one sense, though, this was unfair on Ali: when India visited in 2011, Swann had taken 13 wickets at 40.

The doosra proved unnecessary. Despite learning it from Worcestershire team-mate Saeed Ajmal, and unveiling it briefly against Sri Lanka at Headingley, Ali reasoned that – with the ICC cracking down on illegal actions – it was a risk too far. Overall, he had put to bed references to him as a part-timer. Even before Southampton, he had claimed 101 first-class wickets at 33 since the start of 2012. He was a true all-rounder. 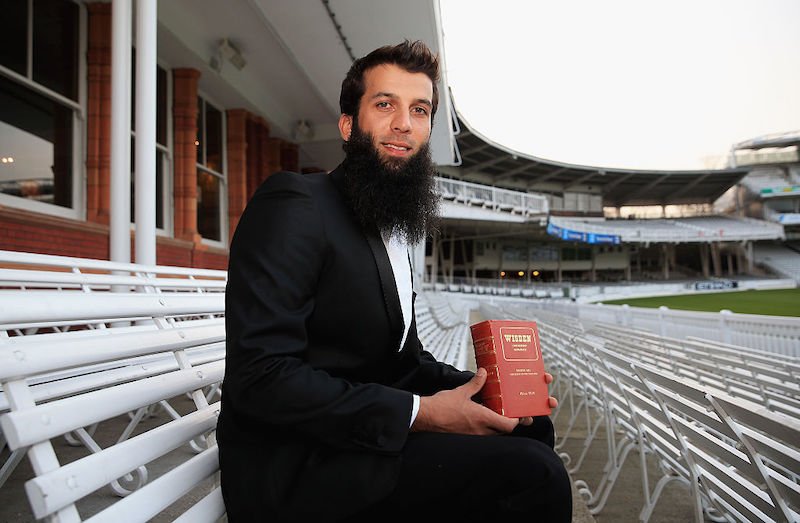 Yet, he provided only glimpses of his batting ability last summer. A serene century against Sri Lanka took England within two balls of a draw at Headingley, and suggested he had the technique and temperament to flourish. But the short ball too often proved his undoing, and he failed to pass 39 against India. “I showed about 15 per cent of what I can do with the bat,” he said. “There is a lot more to come.” He was true to his word: in Colombo in November, he hit the third-fastest one-day century by an England batsman, from just 72 balls.

Moeen Munir Ali, born in Birmingham on June 18, 1987, stood out long before he grew the most impressive beard in English cricket since W. G. Grace. Like his fellow professionals, brother Kadeer and cousin Kabir (who had a cricket ball placed in his cot the day he was born), Ali grew up steeped in the game. Coached by his father and uncle – twin brothers who married sisters – he shone from an early age. His skills were honed in the garden, an old cabbage patch transformed into a net. And, while the family were not wealthy, money was always found to take Ali to games. It was not unusual for his father, Munir, to go without food to pay for petrol.

Aged 14, he thrashed 195 not out in a Twenty20 game for Moseley Ashfield (the next-best score was 11). And in 2004, aged 17, he represented England Under-19 – a team he would go on to captain – and the following year, made his first-class debut, for Warwickshire against Cambridge UCCE, becoming the second-youngest player (after Tom Cartwright) to score a half-century for them. A year later, he made his Championship debut, only to be dropped after another fluent fifty. He subsequently joined Worcestershire, and cracked a 46-ball century in a 40-over game in 2007. But it was the summer of 2013, when he scored more Championship runs than anyone and was named the season’s Most Valuable Player, that forced him into England contention.

The ugly duckling had become a Swann

He began his international career last year with a couple of quiet trips – a limited-overs jaunt to the Caribbean, and the World Twenty20 in Bangladesh. Then, in the summer, things got lively. Ali was warned by the ICC after he wore wristbands bearing the slogans “Free Palestine” and “Save Gaza” while batting in Southampton. The ECB insisted the messages were humanitarian, not political, but the gesture infuriated some, and a death threat – which mentioned Israel – was sent to New Road.

A few weeks later, he was roundly booed by India supporters during the one-day and Twenty20 internationals at Edgbaston. Whatever the motivation – Ali’s religion, his Pakistani origins, his suggestion that British Asians should support England, or a reaction to the wristbands – it was an ugly end to a glorious summer.

It was also surprising. Ali had embraced the position of role model, explaining that he wore his beard “as a label”. He said: “I want people to know I am Muslim and British and proud of both. I want Asian kids to look at me and realise that they, too, can enjoy a career in cricket.”

In a sport that has not always made the most of its Asian talent, Ali provides a reminder that the England team does not just represent a society that is white, middle-class and privately educated, or where cricket is gently applauded on the village green by the church. It also represents a society that lives in the inner city, attends state school, and plays in the streets and parks around the mosque. On and off the pitch, Ali is filling a huge role for England. And, in his own words, there is a lot more to come.

This tribute first appeared in the 2015 Wisden Cricketers’ Almanack