Mike Hendrick was the hard-working epitome of the English medium-fast seamer. After his part in the 1977 home Ashes win, he was a Wisden Cricketer of the Year.

Derbyshire’s uncanny and, no doubt, much-envied tradition of unearthing one fast-medium bowler after another of high quality has been upheld for the past six years or so by Mike Hendrick, whose career really took off last season when he played a leading role in the regaining of the Ashes, figured in his county’s revival and led the national averages for much of the time.

Yet in his case, Derbyshire were twice lucky, for Hendrick was rejected by Leicestershire as a youngster and, indeed, his own county had second thoughts about retaining him during one unsettled, injury-ridden period early in his career.

Curiously, though Michael Hendrick was born in Darley Dale, Derbyshire on October 22, 1948, it was not until he was a teenager that he played any cricket in the county. When he was five the family moved to Darlington and, after some success at school, his father (a fast bowler who works for the Inland Revenue – a potent combination if ever there was one!) took him to the nets at Darlington CC when he was ten. 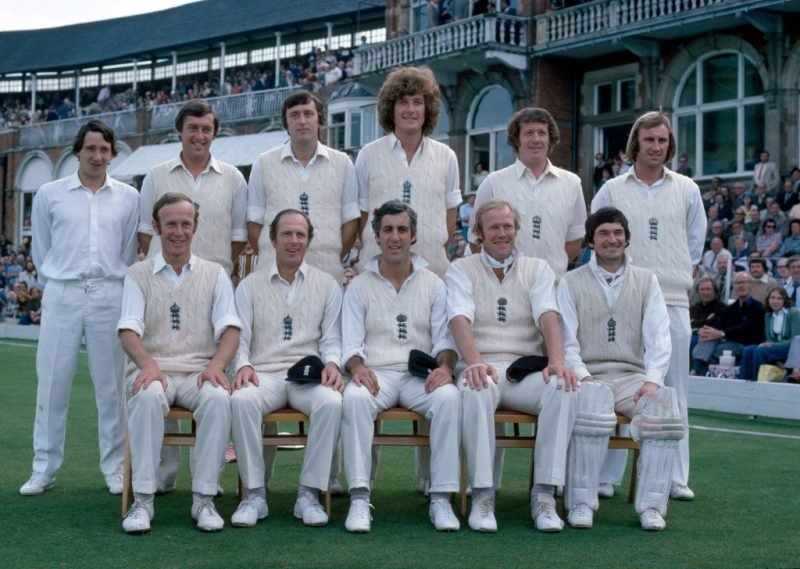 The England side that took the field in the fifth Ashes Test at The Oval, August 25, 1977. Hendrick is third from left in the back row

He appeared regularly for the club’s second and third elevens, though well under age, and at 15 had another change of scene when the family moved to Leicester. After playing for Leicestershire Young Amateurs, he was invited to play for Leicestershire Club and Ground and Second Eleven. By now the young Hendrick had left school and had embarked upon an unpromising career with the electricity board.

He had, however, already made up his mind that the life of a professional cricketer was what he really wanted, even though he found it hard work bridging the gap between club and second eleven standards. After two years, he and Leicestershire parted company, which was not the only setback Hendrick was to suffer as he tried to make his way in the game.

Officially, the kindly explanation was that the county had already many bowlers of a similar type. Inwardly, Hendrick sensed he was considered not good enough. Meanwhile, Derbyshire had got to hear of him and after a month’s trial he joined the junior staff, making two first-team appearances in 1969. The following year, however, he was troubled with shin soreness and played in only five matches. The problem recurred the next year, and although Hendrick made 13 appearances, it was apparently touch and go whether the committee offered him a new contract at the end of that season. 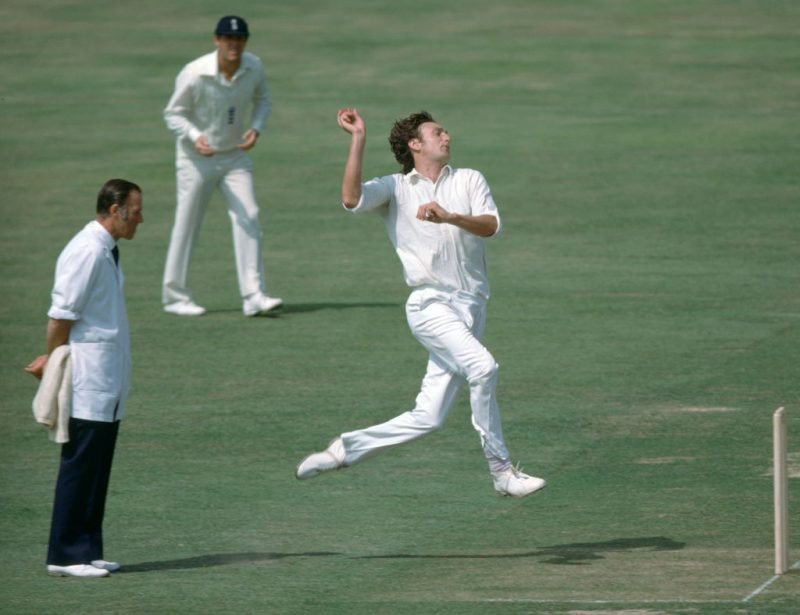 Fortunately for all concerned they did and 1972 proved to be a turning point in Hendrick’s career. During the winter he worked as a labourer and returned to cricket fitter and stronger, especially in the all-important regions around the chest and shoulders. Midway through that season, everything seemed to fall into place. He began to take the wickets of good batsmen with a regularity that had eluded him before and he was able to shoulder the main attacking burden when his partner, Ward, was absent injured.

To many observers, Hendrick actually arrived in a game at Trent Bridge when he took four Nottinghamshire wickets in 12 balls without conceding a run. In that innings he took five wickets for the first time, but before the end of the season he had hinted at his developing class and confidence by taking eight for 50 against Nottinghamshire (there was a newspaper strike, he recalls, and so no headlines for Hendrick) and seven for 65 against Somerset. Suddenly, a bowler who had hitherto been regarded as something of a stop-gap could now be seen as a potential match-winner and his county cap arrived before the end of the season.

By now, his perfect action, allied to a powerful physique, enabled him to make the ball bounce and move either way off the seam while all the time his control was improving and he was adding an extra degree of pace. On his own admission, however, he was probably not really ready for the tour of West Indies in 1973/74.

“I found it hard work because although I was improving, I still lacked the sharpness and control you need for those pitches,” he now reflects. “If I had played in a Test match it would probably have done me no good at all at that stage of my career. But I learned a lot about myself on that tour… not least that I was not as good as I thought I was.”

Five Tests against India and Pakistan the following summer kept Hendrick to the forefront, but despite four wickets in one of them he was still not taking into the Test arena the hostility, control and movement which he was producing, day in, day out, on the county scene. “I could not seem to put it together in Test matches. I have often thought about it, but could not put my finger on a reason,” he says. “I became very uptight and just could not let the ball go. Maybe I was still unsure of myself. I had to keep telling myself I must be good enough otherwise I would not be there in the first place.”

In Australia the following winter, Hendrick limped out of the third Test when a hamstring snapped. Even now he winces when he thinks of that moment and what it probably cost England. Back home in 1975 the injury recurred briefly but he still topped the Derbyshire averages. By now many good judges regarded him as the best new ball bowler of his type in the country, especially in English conditions, and in 1976 he found himself back in the England team, despite having what he considered his worst season in first-class cricket. 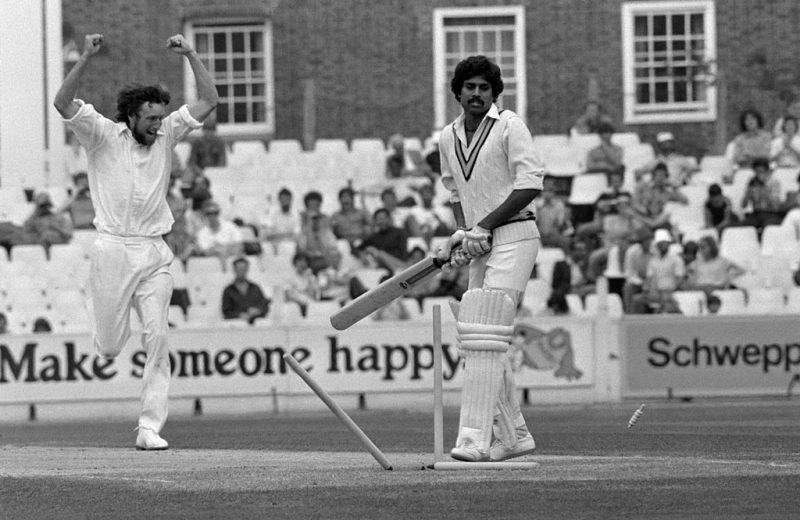 Looking back now he says: “I just could not bowl as I know I can bowl. I don’t think I was right, physically or mentally. I remember I had taken only seven first-class wickets when I played in my first Test match that year and I must have been picked for what I might do rather than what I was actually achieving in county cricket.”

It may also have been that appearing for a county for which life seemed a perpetual struggle also had some effect on Hendrick at that time. If so, the appointment of Barlow as captain changed all that. He told Hendrick not to worry about one poor season; he also made appropriate comments about his fitness – or lack of it.

Not selected for the MCC tour, Hendrick spent the close-season jogging up and down the hills near his home in Stanley, Derbyshire, where he lives with his wife Kathy and three children. Fitter and stronger and under Barlow’s eagle eye, he returned to enjoy his best season last year.

Between playing his part in the Derbyshire revival, he appeared in three Tests and took 14 wickets. For the first time he satisfied himself that he was doing himself justice at international level. His brilliant close fielding, which gives him almost as much pleasure as his bowling, also took the eye.

Related Story: Who is leading the race to 1,000 first-class runs before the end of May?

He still finds the game hard work but he enjoys it. “It’s the only profession I know and it’s nice to think we are now on the way to being adequately rewarded,” says Hendrick. “For too long, too many counties have taken advantage of players’ in-built love of the game. Well, a brain surgeon loves his job, no doubt, but he gets well paid for his skill. I like to think I am now a craftsman who has served most of his apprenticeship, but I know I will never stop learning.”