Replacing Mike Brearley as Middlesex captain was a tough call, but Mike Gatting rose to the challenge in 1983 and was a Wisden Cricketer of the Year the following spring.

As Middlesex reeled off their titles and trophies between 1976 and 1982, it began to occur to Lord’s loyalists that somebody, one day, would have to succeed Mike Brearley, the architect of victory. Clive Radley, Phil Edmonds, then Emburey were all candidates in the years preceding Brearley’s retirement, before Mike Gatting was finally placed in charge of a team of many talents.

He was expected to extend Middlesex’s golden age by presenting their somewhat fickle supporters with a trophy. He did so, too, and it was the first one available. He revealed the Brearley touch by forcing the Essex batsmen to panic as Middlesex, losers all day, pinched a cliff-hanging victory in the Benson and Hedges Cup final. Most acceptable as the B & H was, Gatting spent the rest of the summer insisting, “We’ve got to get that Championship. We’ve got to hang on. It’s not over yet”, even when Middlesex had a handsome lead.

It is never pleasant to be omitted, marginally, from Test selection, but, shrugging off the rejection, Gatting devoted his energies and batsmanship to Middlesex. As if to show that he has not yet acquired Brearley’s full range of luck, when he was required for the last two Tests, Roland Butcher and Wilf Slack were extracted from the side by injury. There were other strokes of bad luck, some self-confessed unprofessional cricket, and in the end Essex took the title.

Gatting does not review 1983 as a chance irrevocably missed. “We are good enough to win the Championship next time. The incentive is now stronger than ever.” His England recall reminded Gatting of two ambitions – a Test century and a regular place in the England side. The century looked odds-on at Lord’s in the Third Test, but a mistimed hook ended a brilliant innings and two over-ambitious shots at Nottingham meant that his tour place was again in doubt. He had lost a similar debate in 1982, but, to the relief of his many admirers, he was chosen now.

He does get out playing challenging strokes. When criticised for this, he gives the cricketer’s reply: “That’s the way I play and make my runs,” and if you enjoy his dismissive hook, riveting square-cut and eagerness to loft the ball, you don’t complain at assorted modes of dismissal. In 1983, for the third consecutive year, he became the highest qualified Englishman in the batting averages. Since the selectors constantly ask: “Where are the batsmen?” They are all from overseas, Gatting may have been hard done by recently. Either that or his approach did not appeal to those who matter.

In terms of ability he should have been competing consistently with David Gower, Derek Randall and Allan Lamb for the positions from three to five. His strokeplay is in their class, but the Nottingham Test was his 24th, compared with Gower’s 53rd and Randall’s 40th. However, the others have made centuries and, as yet, Gatting has not.

Michael William Gatting was born on June 6, 1957 in the London suburb of Kingsbury. His family moved to Willesden, nearer the centre of London, when he was two. He and his younger brother, Steve, had a do-it-yourself grounding in their main sports, playing cricket and football endlessly alongside the family garage. His schools were Wykeham Primary and Kelly. The unlocking of the door to serious cricket came through an advertisement placed by the Brondesbury club when Mike was 12. There the coach to the colts, Peter Farara, and Ted Jackson moulded his power.

In the close-knit world of North London club cricket, his talents became well known from the time he was 14. Jackson let the Middlesex coach, Don Bennett, know all about the hard-hitting boy at Brondesbury and Bennett was impressed enough to send for him in May 1972, to fill a gap in the county Second XI. Still only 14, Gatting was unfortunate enough to encounter a Test bowler, Kent’s Shepherd, who dismissed him first ball. 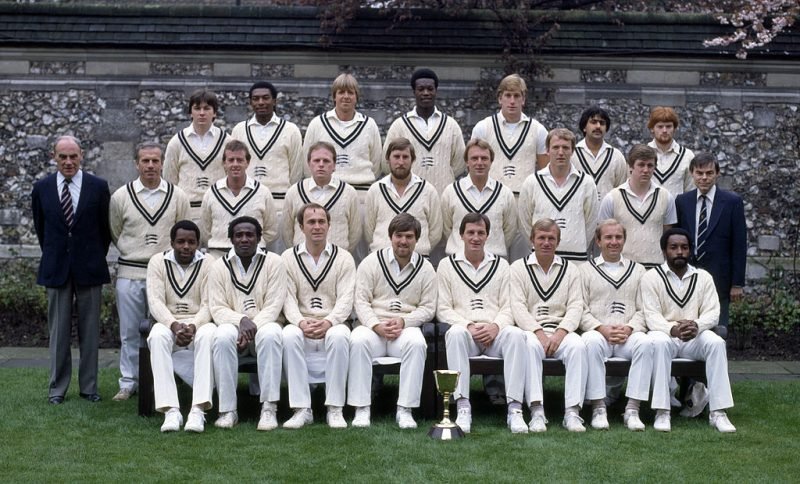 The highlight of the next two summers was helping Middlesex to their third consecutive Under-25 title in 1974. His football was also good enough to take him near to the top; he played at junior level for Queens Park Rangers. “They said I was overweight for a goalkeeper,” he recalls. “I played for Watford’s South-East Counties’ side as a full-back. They offered me an apprentice’s contract. I’d also thought of teaching PE after passing O-levels.” But by this time it was clear where he was going to succeed. His brother became the footballer – for Arsenal and Brighton.

Mike, now concentrating on cricket, was given his chance in the Middlesex first side shortly after his 18th birthday in 1975, the first year of the Middlesex revival. In his first innings he was caught on the boundary off Worcestershire’s Ted Hemsley for 10. Two more unsuccessful county games followed, but he scored heavily for the seconds and finished the season set for 1976. His contribution in the first half of that Championship year matched expectations before he went with England’s Young Cricketers to West Indies, where he topped the batting averages and also took most wickets.

When 20, he went to Pakistan and New Zealand, making his Test debut at Karachi after Brearley, the tour captain, had broken his arm. Gatting was chosen ahead of Ian Botham. In contrast to later, bolder dismissals, he was lbw playing no stroke to Abdul Qadir’s googly and lbw to a full toss from Iqbal Qasim, for five and six, and, six weeks later, against New Zealand in Auckland, he was bowled by Boock for nought. That was that, in Test terms, for over two years. He was included in the Prudential Cup squad in 1979, but without getting a game.

His first home Tests came against West Indies in 1980, when he was in the side that drew the last four matches, making a solid 56 at Old Trafford. In the same summer he made another half-century in the Centenary Test against Australia at Lord’s. In the 1981 Ashes series, when he scored four more fifties, he and Boycott were the only batting specialists chosen for every match.

In between these home series he went to West Indies with Botham’s side, but his only Test chance was at Bridgetown, a match of profound unhappiness in which Ken Barrington died and Mike made a pair. In India, in 1981/82, under Keith Fletcher, despite averaging 55 and scoring fast in the zonal matches, he batted at No.7 or 8 in three of the Tests, usually having to try to press on after much slow early play. Back at home in 1982, as in 1983, he was the most commanding English batsman at county level, but then, too, he had to wait until half-way through the summer for the call from the selectors which he describes as “send for Gatts”. He married Elaine in 1980 and in the same year opened a sports shop in Radlett.

It still took time for Mike Gatting to establish himself at a Test batsman, but by the time his international career ended he had scored 4.409 runs at 35.55 with 10 hundreds in 79 matches.