Mike Denness had a tough act to follow in succeeding Ray Illingworth as England captain, but after a successful summer in 1974 he was named a Wisden Cricketer of the Year.

For Mike Denness, 1974 will be a year to be remembered in his distinguished cricketing career. He returned in April from his first tour as England’s captain with the series against the West Indies squared.

Then he erased doubts about his future as England’s captain with a century for the MCC against India at Lord’s, went on to hit two hundreds in the Tests and to lead his country to a three-nil win in the series, and to continue in the driving seat for the three Tests against Pakistan which were drawn.

All this took place in his benefit year with Kent, whom he led to victory in the Gillette Cup. Then in October he flew off to Australia with the responsibility that must be the ultimate dream of every cricketer – captain of the MCC side in a tour of Australia and New Zealand.

Michael Henry Denness was born in Scotland on December 1, 1940, at Bellshill, the birthplace of another famous sportsman, Sir Matt Busby. He might well have made his name in a winter sport – but at rugby not soccer. For when he was at school at Ayr Academy he was recognised as an outstanding rugby player. In the same schoolboy rugby side was Ian McLauchlan, Scotland’s 1974 captain, who feels sure that had Denness not opted for a cricketing career he would have joined McLauchlan in wearing the blue shirt of Scotland. 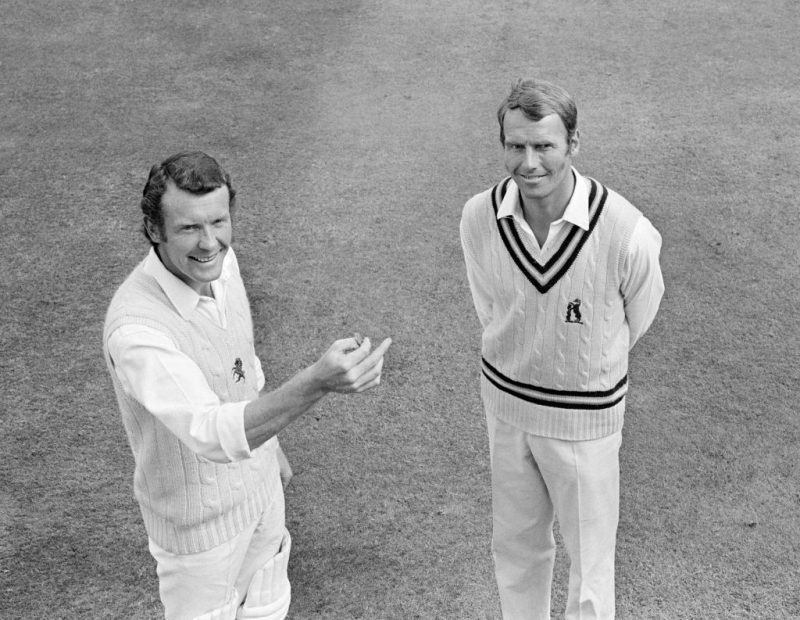 Denness was a stand-off half with, says McLauchlan, “the speed and ability to beat the man with the ball,” but he knew as did Denness in those teenage days that in his heart he preferred cricket. It was not really surprising because his father, a keen sportsman himself, had quietly provided the ideal background for a keen young cricketer.

His father had played cricket with I.A.R. Peebles, the leg spinner, who played for England, and when young Denness was seven, the family moved to Ayr. Five years later, thanks to careful planning by his father, young Denness was housed in a detached home adjoining the Ayr Cricket Club’s ground. He played cricket at school and for the Ayr club, making his début at 13. He soon came under the experienced eye of the club coach, Charles Oakes, the former Sussex player. In 1959, he achieved what was then the height of his ambition – to play for Scotland – the first schoolboy to represent his country, which he did altogether 19 times.

The first interest by an English county in the young Scottish batsman came from Warwickshire after they had played Scotland. But Kent had been tipped off too – George Duckworth had mentioned the youngster’s promise to the then Kent secretary-manager, Leslie Ames.

Meanwhile, E.W. Swanton on a visit to Ayr to propose the toast of cricket at the club’s centenary dinner had been tipped off as well. He met Denness and his father and the following summer the young Scot was introduced by Swanton to cricket in Kent with his touring Arabs side. 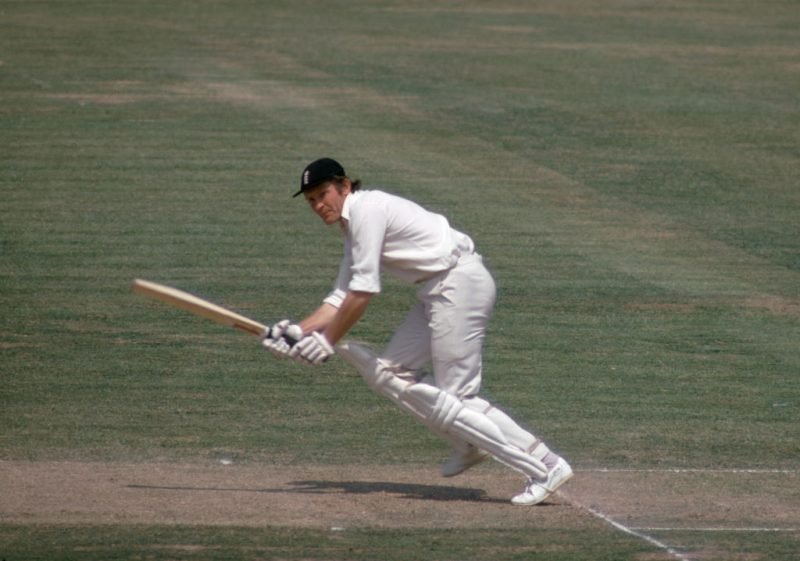 Ames was impressed and Denness joined Kent in 1962. In 1963 he scored 1,000 runs in the season, gained his cap the following year and established himself as an opening batsman, setting up a partnership with Brian Luckhurst which became one of the best in the land.

As his reputation grew with Kent so did his chances of becoming one of the few Scots to play for England. He did – against New Zealand in 1969, just the one match in which he scored 2 and 55 not out. The following year he played once against the Rest of the World – and that to all intents and purposes seemed to be the end of his Test career.

Denness is not a man to show his feelings. Obviously he would have preferred a continuance of his Test career, but he had a job to do with Kent. By now he was leading Kent when Colin Cowdrey was not available and he played a major role in his county’s championship success in 1970.

Naturally an aggressive player, a batsman who goes for his shots – and an attractive array he has – he took to the limited-overs game quickly. He had been Man of the Match in Kent’s Gillette Cup victory in 1967 and when he assumed the captaincy of the Kent team in 1972 he set his sights on, and achieved for the county, the John Player League title.

By now he was being talked about as a future England captain, but he had to win a place in the side. His chance came when he went as vice-captain to A.R. Lewis on the MCC 1972/73 tour of India and Pakistan. He played in all eight Tests on the tour and returned to this country to start the 1973 season in a blaze of batting glory. Batting now at No.3 or four in the Kent side, he hit a century in the county’s first match, 94 and 84 for the MCC against Warwickshire and another century for Kent against the MCC.

Then came the turning point in the season for Denness. He dropped out of the Test trial because of back injury and was not selected for the First Test against New Zealand. On the day after the announcement of the Test side he went to The Oval for a Benson and Hedges match, still not fully fit. With one of his openers, Luckhurst, ruled out by injury, he promoted himself to open the innings and hit as fine a century, 112 not out, as he has completed.

It was not so much an answer to the selectors as an indication of his determination to do the job in hand. He has always said that he will undertake whatever job he is given to the best of his ability, treating each responsibility he is given as a job of work. That day there was just an extra incentive in the Kent camp for the skipper to do a special job of work – and he did.

He made a brief appearance on the Test scene that summer as twelfth man in the Third Test against New Zealand. Apart from that he was in the wilderness as far as Test cricket was concerned, but he hit two more centuries for Kent, including a best-ever 178, and led his county to win the Benson and Hedges Cup and, for the second successive year, the John Player League. 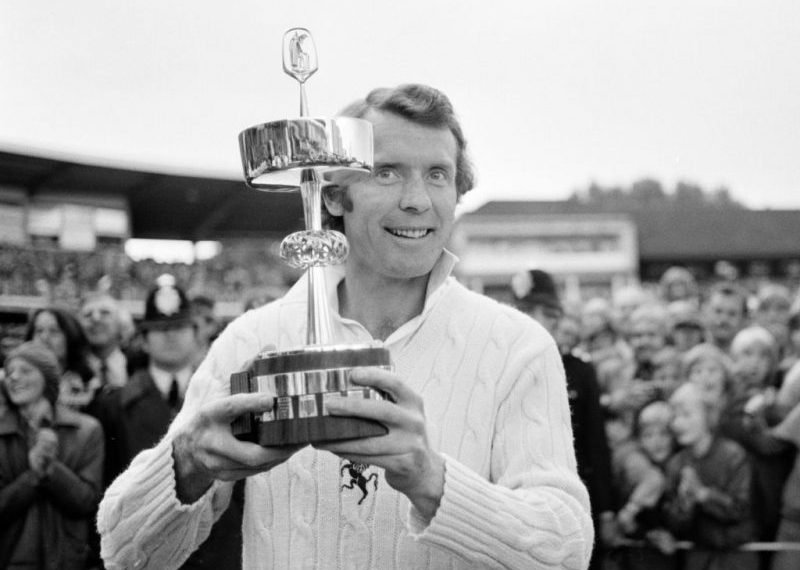 Meanwhile, England were losing heavily their three-match series against the West Indies on home grounds, and at Folkestone, where Kent were involved in their annual Week, Denness received the news that he had been appointed to captain the MCC side in the return series with the West Indies in the Caribbean. Ironically on the day the news was broken, unofficially, the three-day game began against Leicestershire – captained, of course by the deposed England skipper Ray Illingworth.

Denness celebrated with a typically cavalier innings of 98 and went on to lead England in the two one-day internationals against the West Indies – with mixed fortune. He hit 66 and won the Man of the Match award in the first, which England won, and was dismissed for a duck in the second, which England lost.

So virtually unknown as a Test player and completely unknown as a Test captain, he embarked on one of the most testing assignments of his career. Before he went, he said that he hoped his side would be able to return with their heads held high. On the basis that England had been beaten in the series on their own territory and were able to square the series in the Caribbean by winning the fifth and final Test his personal hopes were, on paper at least, achieved.

His captaincy, his personality, and his leadership ability, however had been continually and often loudly adversely criticised in the West Indies. On his return he found himself back to square one – he had virtually to prove all over again that he was equipped as a batsman and as a captain to stay in the driving seat.

Against such a background he went to Lord’s to lead the MCC against India – a side which had defeated England on the winter tour of 1972/73. It was a clear-cut test of his character and he passed it with flying colours – hitting a century.

Genuine and sincere, he has a determined mind. Once he takes a decision, right or wrong, he stands by it

One asset which Denness has in his bid to assert himself as a leader is his fine fielding ability wherever he is placed. In this department of the game he is undoubtedly an inspiration and the safe pair of hands which proved so successful in his early rugby days have served him well on the cricket field.

It takes time to get to know Denness. Once this is achieved any outward sign of reserve is removed. Genuine and sincere, he has a determined mind. Once he takes a decision, right or wrong, he stands by it. He has always played his cricket for his side. For Kent he is extremely unselfish – going for quick runs or leading a runs chase with equal relish.

When the occasion demands he can certainly be a tough man either as a batsman or a captain. One always feels that as a batsman he wants to establish his authority over the bowler as quickly as possible – and to maintain it.

When Charles Oakes talked of the early characteristics of Denness the cricketer he revealed qualities that the England leader still possesses. He has a very good temperament. He is a placid type of player, and Oakes recalls how in those early days the young Denness was always there listening to the cricket talk that goes on in every club and dressing room.

Mike Denness endured a torrid time on England’s 1974/75 Ashes tour, eventually dropping himself from the team. After one more Test in 1975 he was sacked as captain. He scored 1,667 runs at 39 in 28 Tests.