Surrey stalwart Micky Stewart made his name as a brilliant close catcher as much as a batsman. He was named a Wisden Cricketer of the Year in 1958.

Michael James Stewart, of Surrey, who created a world first-class record for a fielder other than a wicketkeeper when he made seven catches in an innings against Northamptonshire, at Northampton, on June 7, 1957, was born at Herne Hill, London, on September 16, 1932.

From the time as a toddler when he learned from his father the use of a bat and ball, Stewart showed equal liking for hitting the ball or catching it. Through School, Services and County cricket he developed these particular branches of his ability, and it was no wonder that fielding brought him his first great distinction.

The occasion, curiously, almost passed Stewart by, for he did not realise as he took catch after catch off the Northamptonshire batsmen that a record lay, literally, within his grasp. Even, after he had held his seventh catch – at short-leg off Kelleher, a former Surrey colleague – Stewart had no idea that he had made cricket history. Not until a Wisden reporter asked him at the end of his innings whether he knew he had broken a record was he aware of the fact. The ball, suitably mounted and inscribed – a gift to Stewart from Surrey – now bears witness that the feat was indeed performed.

From his young days, Stewart took naturally to cricket. He played his first organised games at Dulwich Hamlet School, then went to Alleyn’s School where he held his place for four years in the first eleven and captained the side in his last two seasons. At Alleyn’s, Stewart came under the influence of GR Charnley, master-in-charge of cricket, to whom he owes indebtedness for early coaching and for his first introduction to Surrey as a member of their Young Amateurs team.

In his schooldays, Stewart was a forcing batsman going in No.3 or 4, a splendid fielder and a fairly competent off-spin bowler. Selection for the two big Public Schools’ games at Lord’s – Southern Schools v The Rest and Combined Services v Public Schools – in 1949 and 1950 were the landmarks of his school career. Never before had a boy from Alleyn’s been chosen for the Public Schools.

National Service, in the Royal Engineers, followed. Torn between the desires to proceed to a University and to make sport his living, Stewart had his mind made up for him when B.H. Valentine, the former Kent captain, playing in a match with him, asked whether he would like to come to Kent after leaving the Army. 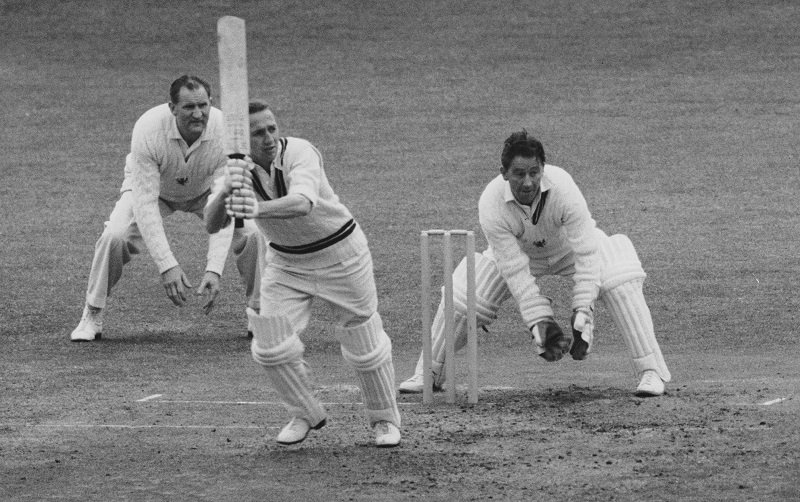 Micky Stewart in action for Surrey against Somerset at The Oval, 1959

Stewart had long toyed with the idea of becoming a professional cricketer and he told Valentine that he would be pleased to throw in his lot with Kent if Surrey had no objections. Officials of the two counties informally discussed the matter, and after Stewart had appeared for The Army against The RAF at Lord’s, Surrey decided to offer him a position on the playing staff for season 1953, the year of his demobilisation.

His career as a professional cricketer was one of gradual but marked progress. He found his feet by averaging just over 41 in 18 innings in Minor Counties’ matches in 1953. Surrey promoted him to the county eleven in 1954, and he demonstrated his potentialities in no uncertain manner by scoring 301 runs in his first four innings.

He began with 52 and 6 against Gloucestershire, then he hit 109 against the Pakistan touring team and followed this noteworthy effort by taking 134 off Essex. His first full season, 1955, yielded him a thousand runs and his county cap. The following season his aggregate went past fifteen hundred runs – including his highest score, 166 against Essex – and last summer he scored 1,801 runs, average 36.75. His safe catching, as well as his attractive batting, proved a valuable factor in Surrey’s record run of Championship successes. In 1955 he held 52 catches in all first-class matches, and last summer he took 77 – one short of the record standing to the credit of WR Hammond.

Stewart’s agility and enthusiasm as a fielder sprung from imitation and admiration of Constantine. Stewart, as a youngster, watched the famous West Indies’ all-rounder whenever he could, and then, in his local park, dived and jumped for catches in the style of his hero. A cover-point at school, Stewart, under the guidance and discipline of Stuart Surridge who insisted on fielding excellence, graduated to positions close to the wicket. Although quite happy in any place except slip he prefers forward short-leg and short square-leg.

Instinctive reaction to the movement of batsman is the keynote of his fearless fielding only a few yards from the stumps. Confidence in the technique of the Surrey bowlers enables Stewart to stand his ground within dangerous range of the bat, and when he achieved his record performance he said that Lock, Laker and Alec Bedser, off whom he made the catches, were so accurate that all were comfortably held although he was so close. A modest understatement was his added comment: “The ball just seemed to keep coming to me.”

His promotion to opening batsman occurred when he played for Surrey II. Sandham, the Surrey coach who gave him much useful advice, saw his worth as a No.1, and Surridge did not hestitate to put him in first against Pakistan after he had made fifty, as No.4, on his debut against Gloucestershire. Cultivation of the hook – a stroke which rarely costs him his wicket – and pull has made Stewart a strong on-side player, but he does not neglect his off-side shots. He drives forcefully with good placement and employs the cut, square and late.

One of his early faults was his impetuosity, but he has managed to rectify the failing to a large extent without losing his urge to hit. His first four seasons with Surrey brought him twelve centuries – one of them, 155 not out, made when he shared a first-wicket partnership of 255 with R.C.E. Pratt against Cambridge University in 1956.

Stewart’s other sport, soccer, has given him enjoyment first as an amateur with Wimbledon, Hendon and Corinthian-Casuals, and now as a professional with Charlton Athletic. He gained an Amateur International cap as an inside-forward for England against France in 1956. With ordinary luck and freedom from injury Stewart should continue to advance at both games. The cricket writers voted him the best young player of 1957 by a two-thirds majority.

Micky Stewart went on to play in eight Tests for England and later become team’s first full-time manager. He captained Surrey to the Championship in 1971.