After Michael Holding’s sensational performances in England in 1976, he was named a Wisden Cricketer of the Year. In the 1977 Wisden Cricketers’ Almanack, Tony Cozier wrote this revealing profile on the bowler – who would go on to become a legend of the game.

One of the most enduring memories of the 1976 cricket season in England – for the spectators if not for opposing batsmen – was the graceful, rhythmic action of the West Indian fast bowler, Michael Holding. The speed which he generated from his deceptive approach to the stumps was, on occasions, frightening and, in association with Roberts, Daniel and Holder, proved a decisive factor in the West Indies’ resounding triumph.

It was a series filled with several outstanding individual feats, but none could quite compare with Holding’s in the final Test at The Oval. On a depressingly lifeless pitch, the other fast bowlers of both teams could only take five wickets between them at a cost of 477 runs. Yet the conditions seemed to act as a catalyst which lifted Holding to an extraordinary performance. 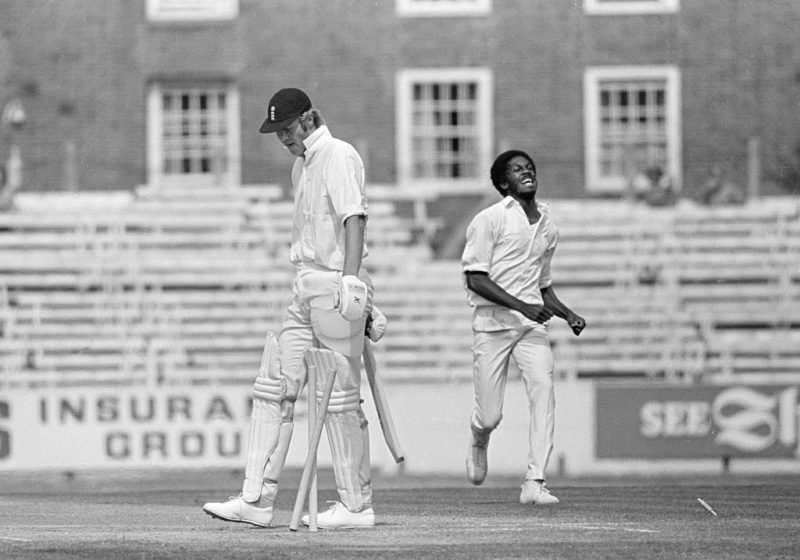 Holding dismantles Tony Greig’s stumps at The Oval, 1976 – he finished the Test with match figures of 14-149

He proved that nothing could deter bowling of great pace and accuracy by taking eight for 92 in the first innings and six for 57 in the second. No fewer than twelve of his fourteen victims were either bowled or lbw, an accurate reflection of his speed and his consistent line. Of all the great West Indian bowlers of the past, none had equalled this feat of 14 wickets in a Test.

Holding’s rise from the relative obscurity of Jamaica’s Shell Shield team to the forefront of the game’s finest fast bowlers was meteoric. A year before his Oval achievement, he had not played in a Test and had taken a mere sixteen wickets in three first-class seasons in the Caribbean at the unflattering cost of 51 runs each. Yet his potential has always been undeniable and the West Indies selectors recognised it picking him in the seventeen for the 1975-76 tour of Australia, a choice for which they deserve the greatest credit. Since then, Holding has fulfilled the expectations of everyone who was predicting great things for him from his days at Kingston College in Jamaica.

Fortunately for West Indian cricket, Holding’s sports master at the time, Mr. Trevor Parchment, advised him to concentrate on that game.

Born in the parish of St. Andrew, in Jamaica, on February 16, 1954, MICHAEL ANTHONY HOLDING was fortunate that his parents were keen sportsmen who encouraged him in all his sporting exploits. His father, Ralph, a building contractor, playing club cricket to a good standard and has been President of the strong Melbourne Club – for which, understandably, his son has played since leaving school. Mr Holding senior was in Australia to watch Michael make his entry into Test cricket an, along with Mrs Holding, witnessed his Oval bowling.

At school, young Holding immediately established his credentials as a natural athlete and he shone both at cricket and athletics. There is a strong tradition in both sports in Jamaica which, apart from its long line of great cricketers, has also produced such famous runners as Arthur Wint, Herb McKenley, George Rhoden and Don Quarrie. Fortunately for West Indian cricket, Holding’s sports master at the time, Mr. Trevor Parchment, advised him to concentrate on that game.

Holding pictured on his Test debut against Australia at the Gabba, 1975

It was not long before the guidance was bearing fruit. By 1972, he was in Jamaica’s team for the annual West Indies youth tournament and the following season came his first class debut. He made a name for himself in that initial year by clean bowling the Australian opening batsman Ian Redpath, cheaply three times in four meetings.

His development, however, was not spectacular. His lean physique found it difficult to cope with the strain of fast bowling and he was troubled by illness and injury. Nevertheless, he was gaining size and pace all the time and, by the 1975 Shield season, confirmed reports from Jamaica that he was the bowler to partner Roberts for the series in Australia. 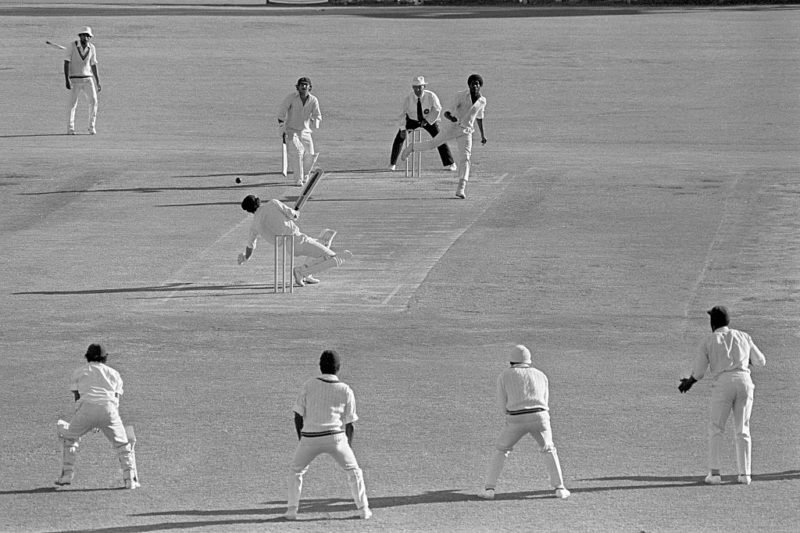 Holding bowls a bouncer to Greg Chappell in the second Test between Australia and West Indies, 1975

In some quarters, Holding’s selection, as one of five fast bowlers, was a surprising gamble. Even some of his team mates, who had not seen him nor played against him for two years, were astonished by his hostility in the opening game of the tour against a Colts team at Adelaide. When he won a close match against New South Wales almost single-handed by taking six for 60 his place in the Test team was assured.

By the team the West Indies won the second Test at Perth by an innings, Holding taking four wickets in the first innings, the Australian wicket-keeper, Rodney Marsh, was speaking of him becoming one of the fastest bowlers of all time. Unluckily, injury ruled him out of the third Test and, thereafter, he and his team deteriorated disappointingly. Richie Benaud was of the opinion that he was a better bowler at the start of the tour than he was at the end and thought he was straining too hard for pace and bounce.

In the series against India in the Caribbean which immediately followed, Holding took nineteen wickets in four matches and, on occasion, looked a truly great bowler. On others, however, he was again guilty of bowling too short with a corresponding loss of accuracy. It was a criticism which could have been levelled at him during the first half of the tour of England as well and it was probably a team meeting midway through the third Test at Old Trafford which finally put him right. 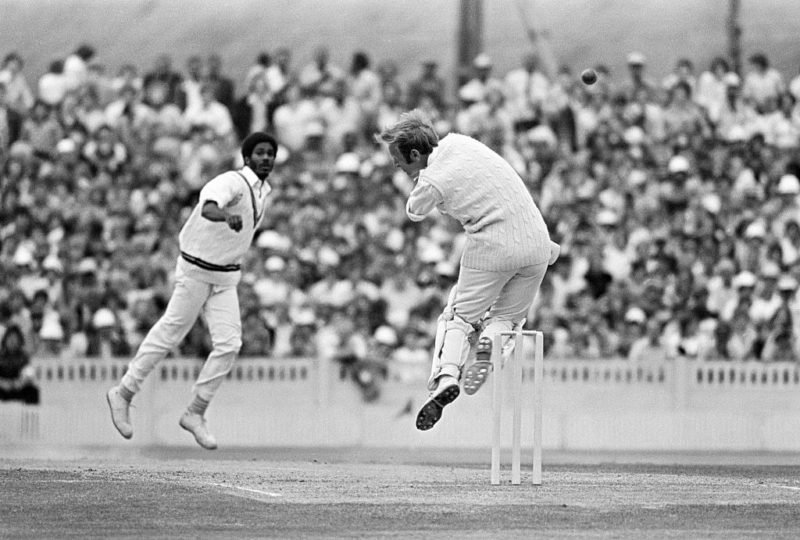 He and Daniel had unleashed a volley of very fast, very short bowling against the veteran England openers, Edrich and Close, in the final hour and a half’s play on the Saturday. Close took a few fearful blows, Holding was warned for intimidation and England closed the day without the loss of a wicket. It was, observed the West Indies manager, Clyde Walcott, bad bowling – and he obviously told Holding so.

The effect was immediate. He pitched the ball right up on the Monday with telling success and the lesson was learned. In the subsequent Tests, the bouncer was kept in reserve as a surprise weapon and Holding realised, as have all prosperous fast bowlers, that there is no counter to genuine pace and accuracy.

Holding has been an irreplaceable acquisition to the West Indies. Not only has he proved a “lethal” bowler but a useful lower-order batsmen and magnificent outfielder as well. His long, loping strides as he chases the ball make him a joy to watch. In addition, he is an intelligent young man who fits easily into any company. 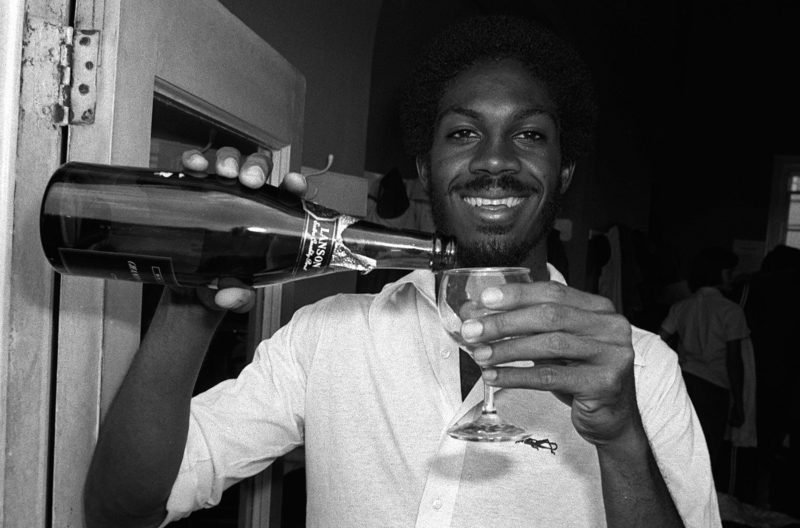 Holding revels in victory after the conclusion of the Oval Test, 1976 – West Indies won the series 3-0

In fact, those meeting him for the first time find it difficult to reconcile the quiet mild-mannered individual they confront off the field with the fiercely competitive sportsman they see on it. His much-publicised display during the Sydney Test of the series against Australia when he wept publicly after having a caught behind dismissal refused by the umpire was indicative of his will to succeed, not of any weakness in character. His hostile bowling against India in the Kingston Test of that series when several batsmen were injured was influenced by the same spirit, not malicious intent.

Eminent fast bowlers throughout history have been in great demand and, in this age of jet travel, Holding can ask his price from the clubs of England and Australia, always so anxious to please their members and their sponsors. Already, he has received tempting offers, but he is anxious not to subject himself to the type of labour which could bring a premature end to his career and, so far, he has resisted them.

As a computer programmer with the Jamaican Government, Holding will probably be one of the rare contemporary West Indian cricketers who does not play the game all year round in every part of the globe. Whether that is good news or not for opposing batsmen is debatable. They may confront him less often than they might some other fast bowlers but, when they do, he will be keen and fresh and that, on all evidence to date, is an alarming prospect.