Max Walker was an often underrated seamer in the great Australia sides of the mid-1970s. His Wisden obituary in 2017 remembered a hugely popular figure.

Every big draw needs a good support act. In the 1970s, the Australian Test side boasted the precision and purpose of Dennis Lillee, the anarchic destructiveness of Jeff Thomson – and the apparent artlessness of Max Walker. The action he described as “right arm over left ear’ole”, and the seemingly crossed legs at the point of delivery, produced an almost comic effect, masking the skill which brought him 138 wickets in 34 Tests with incisive inswing.

Walker’s nickname of “Tangles” had an amiable ring, but there were plenty of Test batsmen who found him as searching and relentless as his more vaunted team-mates. After his cricket finished, he remained in the national consciousness, with media work, prolific writing, and skillfully honed performances on the public-speaking circuit.

Walker was born in Hobart, but decamped in 1967 to study architecture at the Royal Melbourne Institute of Technology – and play Australian Rules football for Melbourne, where he had 85 games as a ruckman over six seasons. He became a fixture in Victoria’s cricket team from 1971/72, and a Test player the following season. He was a surprise selection, but not for long: an inspired spell of six for 15 from 16 overs won the Sydney Test after Pakistan had started the last day needing only 111 with eight wickets in hand.

In the West Indies immediately afterwards, Walker heroically picked up the baton when Lillee went down with back trouble, and Bob Massie lost form. Walker averaged more than 50 overs per Test, and took 26 wickets as Australia won 2-0. Radio commentator Alan McGilvray told of his bravery in bowling with badly bruised legs and ankles during the Georgetown Test, but Walker’s own approach was simple: “Dennis and Bob can’t, so I must.”

During the 1974/75 Ashes, Lillee and Thomson prised open England’s batting, yet Walker gave them no respite, bowling long spells without slackening the pressure. In the final match, which England won by by an innings, Walker found himself leading the attack again: Thomson had injured his shoulder playing tennis, while Lillee went off with a bruised foot after six overs.

Walker responded with his best Test return – 8-143, the last five for 17. “His figures made amazing reading,” wrote Frank Tyson, “when one considered that the English total was in excess of 500.”

Walker had two tours of England, playing in the inaugural World Cup final at Lord’s in 1975, and taking 53 wickets at 22 in 1977, including seven for 19 as Gloucestershire were skittled for 63. He also made a career-best 78 – and shared a ninth-wicket partnership of 100 with Mick Malone – in what turned out to be his final Test, at The Oval.

He had played his part in the helter-skelter of the first two days of the Centenary Test in March 1977, bowling almost unchanged through the first England innings of 95. The most memorable of his four wickets was Tony Greig, whose stumps went cartwheeling, to the delight of Walker’s home MCG crowd.

He eagerly signed for Kerry Packer, and had no compunction about being part of the new order. He and Lillee were the only two bowlers to capture seven wickets in an innings during the World Series Cricket Super Tests. Walker was 31 when peace was brokered and, although a Test return proved beyond him, he had three more successful seasons with Victoria, taking 88 wickets in 24 matches. He spent the rest of his life, as sportswriter Greg Baum put it, being “his own industry”. 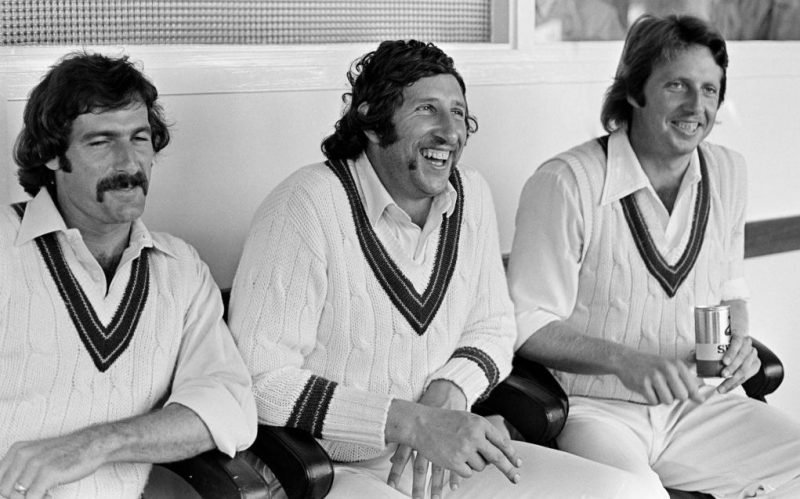 The lethal trio! In 12 Tests played together, Lillee, Walker and Thomson took 154 wickets between them

He did radio and television commentary, anchored shows for Channel Nine, starred in a long-running advert for fly spray, and produced 14 largely humorous books, with titles such as How to Kiss a Crocodile and How to Hypnotise Chooks. He didn’t pretend they were profound or literary, but they were read avidly by an otherwise non-bookish public. There was charity work, too, marked by an honesty of spirit; he earned perhaps Australia’s highest accolade, of being “a good bloke”.

Walker’s old team-mate Keith Stackpole said he was “lovable, uncomplicated and astute”. And, although he hardly needed it, he was kept in the public eye by the spoof “12th Man” tapes of impressionist Billy Birmingham, who invented a long-running saga featuring Walker trying to reclaim his berth in the Channel Nine commentary box by buttering up Richie Benaud. One attempt has Max ringing up to see if Benaud had a copy of his latest book: “Of course I haven’t,” replies the faux Richie.