As an aggressive wicketkeeper-batsman, Matt Prior was a key member of the England team that rose to No.1 in the world in 2011. The previous year he had been a Wisden Cricketer of the Year.

Many people’s abiding image of the 2009 Ashes will be Graeme Swann wheeling away into the covers having taken the final wicket at The Oval. Or perhaps Andrew Flintoff genuflecting at Lord’s. Or could it be something more obscure, something almost lost in the commotion of the final day?

As Marcus North executed an expansive sweep against Swann, the ball gripped the dusty soil and ripped past his bat to be caught by England’s wicketkeeper, who glanced down at North’s back foot and, with a swivel of the hips, whipped off the bails with his right hand. North half-looked round, guiltily, to see his foot on the line. There was no need for the third umpire. Matt Prior was already dancing a jig of joy as his team-mates poured over him.

The dismissal was not the most important of the day; by then, England would have regained the Ashes anyway. But it stood out for two reasons. It represented an immense talent finally fulfilled, in a cricketer with a huge work ethic who has always been desperate to succeed. And among the pile of Ashes coverage there have been only fragments of comment about Prior’s glovework; like a good football referee, his best work went unnoticed. 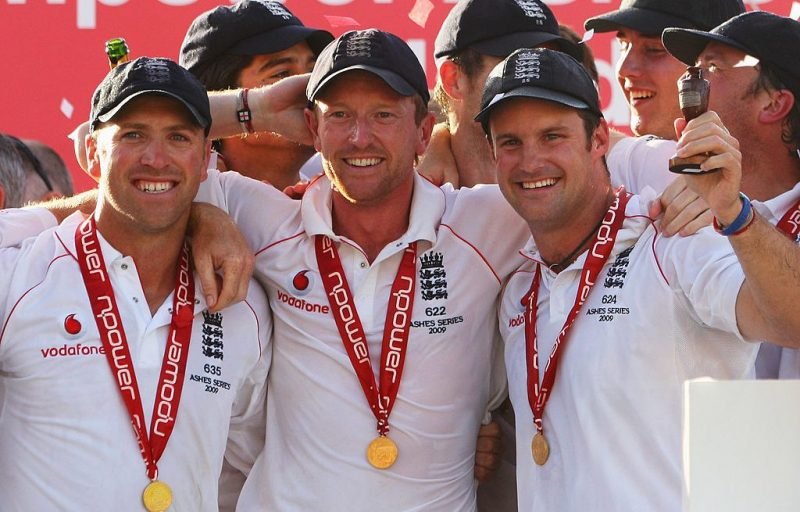 Prior (L), with Paul Collingwood and Andrew Strauss after the 2009 Ashes triumph

His stumping at The Oval crowned a year that began with the birth of his first child. Prior comfortably out-kept the vaunted Brad Haddin, was England’s second-highest run-scorer in the Ashes, with a Gilchrist-like strike-rate of 82, and established himself as the first-choice keeper in all three formats. “It was crazy, like nothing I’ve ever played in before,” Prior says of the Ashes. “More so for the off-pitch goings-on than for what happened on the field. I did a press conference at Lord’s and I’ve never seen so many people and cameras crammed into one room. It was quite daunting. I started to be recognised in public for the first time.”

Matthew James Prior was born in Johannesburg on February 26, 1982, to a South African mother and an English father. His early childhood was relatively serene; from the age of eight he played cricket at King Edward VII (the school of Gary Player and Graeme Smith) where he says the aim was winning. “We didn’t play for enjoyment. The enjoyment came when we won. It was only when I came here that I experienced the idea that sport is more about taking part.”

Here, of course, is England, to which his family uprooted when he was 11. Before long, his parents separated and his mother developed breast cancer. It was a challenging time for a young boy trying to establish an identity in a new country, but Prior says it put his sporting life into perspective. “You can sometimes feel it’s the end of the world if you don’t score runs, but I’ve always known things could be a lot worse.”

It was five years before he felt settled, and a sports scholarship to Brighton College helped. He was mentored by former Sussex bowler John Spencer. “John was a great help,” he recalls. “He taught me the value of putting my work in before I was allowed to play games.” Prior helped to make the college one of the strongest school sides in the country. “It was on a tour of India in 1997-98 that he really showed how much a cut above the rest of the talented team he was,” Spencer remembers. “He played the classy Indian spinners superbly, scoring six fifties and 205 not out.”

His performances were noted by the county, whose cricket manager, Peter Moores, saw enough in the raw, slightly cocky schoolboy to thrust Prior into Sussex’s first team in 2001. On his first-class debut at Worcester, he hooked a fired-up Andy Bichel and gave as good as he got in the inevitable verbals. His batting partner, James Kirtley, suggested in a few stern words that, in the interests of their safety, it wasn’t the best idea for a 19-year-old debutant to wind up the Australian fast bowler. 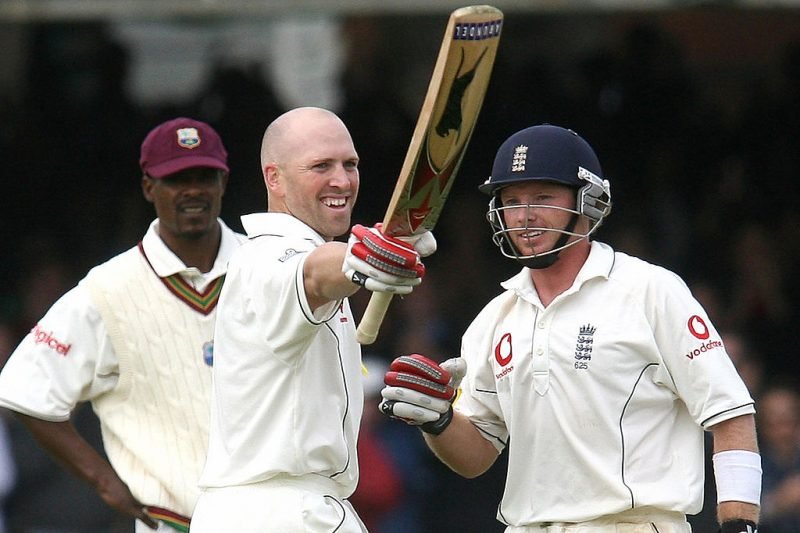 The hundreds followed in time, as did talk that Prior could be the answer to England’s keeping problems. Moores, now England coach, and his fellow selectors thought so, and handed him a Test debut against West Indies at Lord’s in 2007. Cynics [and fans of Chris Read and James Foster] who muttered about nepotism were silenced when Prior became the first England wicketkeeper to score a century on debut.

A brilliant innings it was too, taking on the short ball with glee and cover-driving anything overpitched with an elan that had commentators purring. He averaged nearly 65 in that series and, despite not making any significant contributions against India later in the summer, he was the natural first-choice keeper for the tour of Sri Lanka, where, again, he was one of England’s most successful batsmen.

“I knew I only had myself to blame for being dropped. And I knew there was no magic solution – I just had to keep working hard and I might get another go”

But despite the runs and the solidity he brought to the lower middle order, his keeping began to suffer under the relentless scrutiny of TV cameras. There were expensive drops off Ryan Sidebottom against India and Sri Lanka, and a worrying propensity to leak byes. Also, Prior’s combative attitude and constant chatter began to grate. He was heavily implicated at Trent Bridge when Zaheer Khan complained that England were trying to put him off by throwing jelly beans on the pitch, though Prior has always denied being the culprit.

The selectors replaced him with his former Sussex team-mate, Tim Ambrose, for the tour of New Zealand. The irony was plain: Ambrose had moved to Warwickshire two years earlier, frustrated that a regular place was being barred by Prior. “I knew I only had myself to blame for being dropped,” Prior says. “And I knew there was no magic solution – I just had to keep working hard and I might get another go.” 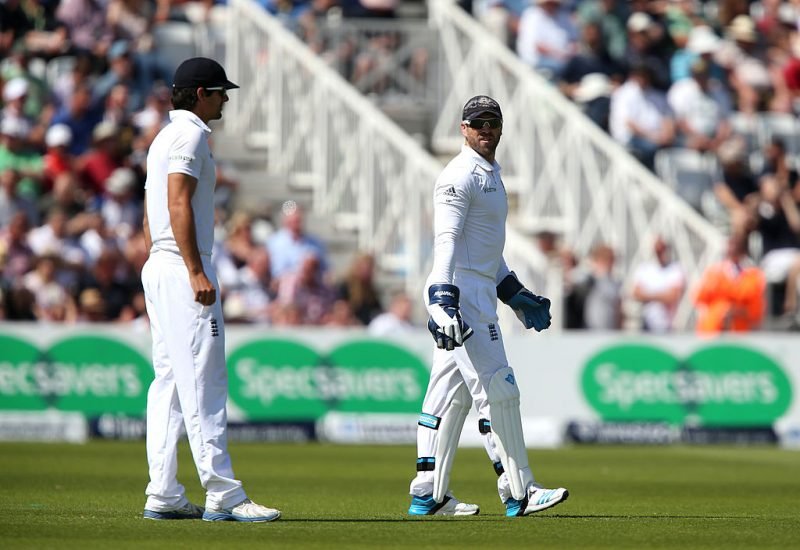 He was recalled for the one-day series with South Africa in August 2008, and toured India that winter. Shortly afterwards Moores, a former keeper himself, parted company with England, which might have left Prior short of a sympathetic ear. “Pete was a massive influence on my career,” Prior says. “I met him as a 13-year-old, when I volunteered to keep in a coaching session. He made the next hour the best fun I’d ever had in sport, and from then on I was hooked.”

But the ECB’s academy director, Dave Parsons, put Prior in touch with former England keeper Bruce French, and they quickly bonded. There was clearly much work still to do on Prior’s technique. In the Caribbean in March, he had his first keeping world record: most byes in a Test by a specialist wicketkeeper [52].

“Speed is everything with keeping,” French says. “I quickly noticed with Matt that, while he was powerful, he was slow to the ball. His hands were actually really good, but his lack of footwork meant he wasn’t getting them, and his head, in behind the ball. The way he kept in the Ashes was magnificent. But it was the result of a huge amount of effort.”